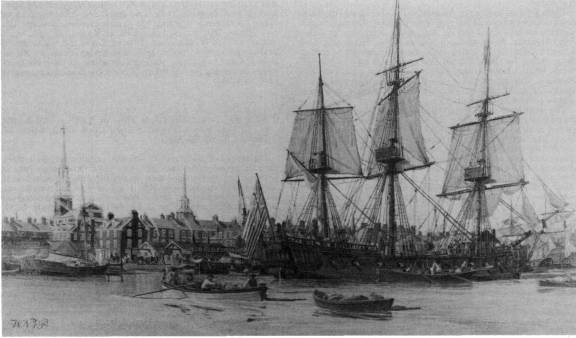 As a child, Alfred, the youngest son of Aethelwulf, King of the West Saxons, exhibited a love of learning and made two trips to Rome. During these travels, he noticed the contrast between civilized conditions on the European continent and the primitive state of his native Wessex. As a result, he devoted his life to raising the level of culture in his homeland. After succeeding his brother, Aethelred, to the throne in 871, Alfred demonstrated great skill as an administrator and political leader. He brought men of learning to Wessex and encouraged the translation of outstanding books from Latin into Anglo-Saxon, besides devoting much of his own time to translation.

Despite intellectual interests and a peaceful disposition, Alfred was a great military leader and succeeded in stemming the Danish conquest of England. He realized that a navy was necessary to defend his realm and, because of the dearth of Anglo-Saxon sailors, brought Frisian mariners to England from across the North Sea to man ships which he had constructed to guard England's coasts. This accomplishment won him the title, "Father of the Royal Navy," and the overall success of his almost three decades of rule has caused history to remember him as "Alfred the Great."

Alfred, a ship-rigged vessel originally named Black Prince, was built at Philadelphia in 1774. No record of her builder seems to have survived, but it is possible that John Wharton may have constructed the ship.

John Barry served as the ship's only master during her career as a Philadelphia merchantman. Launched in the autumn of 1774, as relations between the American colonies and the mother country grew increasingly tense, Black Prince was fitted out quickly so that she could load and sail for Bristol on the last day of 1774. The ship did not return to Philadelphia until 25 April 1775, six days after the battles of Lexington and Concord.

Fearing that American commerce would soon be interrupted, her owners were eager to export another cargo to England, so they again raced to load and provision her. Black Prince sailed on 7 May, this time bound for London. She did not reach that destination until 27 June. The ship left the Thames on 10 August, but encountered contrary winds during much of her westward voyage and finally returned to Philadelphia on 4 October.

While the ship had been abroad, much had happened to deepen the American conflict with England. The Battle of Bunker Hill had been fought, the other colonies acting in Congress had pledged to support Massachusetts in its struggle for freedom, and George Washington had taken command of the American Army besieging British-occupied Boston. Moreover, private correspondence which Black Prince had brought from England to members of the Continental Congress reported that the British Government was sending to America two unarmed brigs heavily laden with gunpowder and arms.

This intelligence prompted Congress on 13 October to authorize the fitting out of two American warships, of 10 guns each, to attempt to capture these ships and divert their invaluable cargoes to the ill-equipped soldiers of Washington's army. Congress decided, on 30 October, to add two more ships to the navy, one of 20 guns and the other slightly larger, but not to exceed 36 guns. Alfred undoubtedly was the latter ship.

As a result, the Naval Committee purchased Black Prince on 4 November 1775, renamed her Alfred four days later, and ordered her fitted out as a man-of-war. Her former master, John Barry, was placed in charge of her rerigging; Joshua Humphreys was selected to superintend changes strengthening her hull, timbers, and bulwarks as well as opening gunports; and Nathaniel Falconer was made responsible for her ordnance and provisions.

Soon four other vessels joined Alfred in the Continental Navy: Columbus, Cabot, Andrew Doria, and sloop Providence. Esek Hopkins, a veteran master of merchantmen from Rhode Island, was appointed commodore of the flotilla. Alfred was placed in commission on 3 December 1775, Capt. Dudley Saltonstall in command, and became Hopkins' flagship.

The new fleet dropped down the Delaware River on 4 January 1776; but a cold snap froze the river and the bay, checking its progress at Reedy Island for some six weeks. A thaw released Hopkins' warships from winter's icy grasp in mid-February, and the fleet sortied on 18 February for its first operation. The Marine Committee had ordered Hopkins to sail for Hampton Roads to attack British warships which were harassing American shipping in Virginia waters; then to render similar service at Charleston, S.C.; and, finally, to head for Rhode Island waters. He was given the discretion of disregarding these orders if they proved impossible and planning an operation of his own.

However, by the time his ships broke free of the ice, growing British strength in the Chesapeake prompted Hopkins to head for the West Indies. Knowing that the American colonies desperately needed gunpowder, he decided to attack the island of New Providence in the Bahamas to capture a large supply of that commodity as well as a great quantity of other military supplies reportedly stored there. A fortnight after leaving the Delaware capes, on the morning of 3 March, Hopkins arrived off Nassau and captured Fort Montague in a bloodless battle in which Continental marines under Capt. Samuel Nicholas joined Hopkins' sailors in America's first amphibious operation.

That evening, Hopkins issued a proclamation which promised not to harm ". . . the persons or property of the inhabitants of New Providence . . ."if they did not resist. The following morning, Governor Montfort Browne surrendered Fort Nassau, but only after he had spirited away most of the island's gunpowder from New Providence to St. Augustine, Fla.

After Hopkins stripped the forts of their guns and all remaining ordnance, Alfred led the American fleet homeward from Nassau harbor on St. Patrick's Day, 17 March, the same day that British troops were evacuating Boston. On 4 April, during the homeward voyage, Hopkins' ships captured the six-gun British schooner Hawk and the eight-gun bomb brig Bolton. Shortly after midnight on 6 April, Hopkins encountered the 20-gun HMS Glasgow. That British frigate, which was carrying despatches telling of the British withdrawal, put up a fierce and skillful fight which enabled her to escape from her substantially more powerful American opponents. At the outset of the fray, fire from her cannon cut Alfred's tiller ropes, leaving Hopkins' flagship unable to maneuver or to pursue effectively. The American ships did attempt to chase their fleeing enemy, but after dawn Glasgow disappeared over the horizon and safely reached Newport, R.I.

When Alfred and her consorts put into New London, Conn., on 8 April, the Americans were at first welcomed as heroes. However, many of the officers of the American squadron voiced dissatisfaction with Hopkins, and he was later relieved of command.

Alfred was inactive through the summer for a number of reasons, but high on the list of her problems were want of funds and a shortage of men. On 7 August, Capt. John Paul Jones, who had helped to fit her out as a warship and had been her first lieutenant on the cruise to New Providence, was placed in command of the ship. She departed Providence, R.I., on 26 October 1776 in company with Hampden, but that vessel struck a "sunken rock" before they could leave Narragansett Bay and returned to Newport. Her officers and men then shifted to sloop Providence, accompanying Alfred to waters off Cape Breton Island which they reached by mid-November. There they took three prizes: on the llth, the brigantine Active, bound from Liverpool to Halifax with an assorted cargo; the next day, the armed transport Mellish, laden with winter uniforms for British troops at Quebec; and, on the 16th, the snow Kitty, bound from Gaspe to Barbados with oil and fish.

Because of severe leaks, Providence sailed for home soon thereafter and Alfred continued her cruise alone. On 22 November, boats from the ship raided Canso, Nova Scotia, where their crews burned a transport bound for Canada with provisions and a warehouse full of whale oil, besides capturing a small schooner to replace Providence. Two days later, Alfred captured three colliers off Louisburg, bound from Nova Scotia to New York with coal for the British Army and, on 26 November captured the 10-gun letter-of-marque John of Liverpool. On the homeward voyage, Alfred was pursued by HMS Milford but managed to escape after a four-hour chase. She arrived safely at Boston on 15 December and began a major refit.

Captain Elisha Hinman became Alfred's commanding officer in May 1777, but she did not get underway until 22 August when she sailed for France with Raleigh to obtain military supplies. En route, they captured four small prizes. They reached L'Orient on 6 October, and on 29 December sailed for America. They proceeded via the coast of Africa, where they took a small sloop, and then headed for the West Indies, hoping to add to their score before turning northward for home.

On 9 March 1778, near Barbados, they encountered British warships Ariadne and Ceres. When the American ships attempted to flee, Alfred fell behind her faster consort. Shortly after noon, the British men-of-war caught up with Alfred and forced her to surrender after a half an hour's battle.

After surrendering, Alfred was taken to Barbados where she was condemned and sold. She was purchased and taken into the Royal Navy as H.M. armed ship Alfred (20 guns) and was sold in 1782.