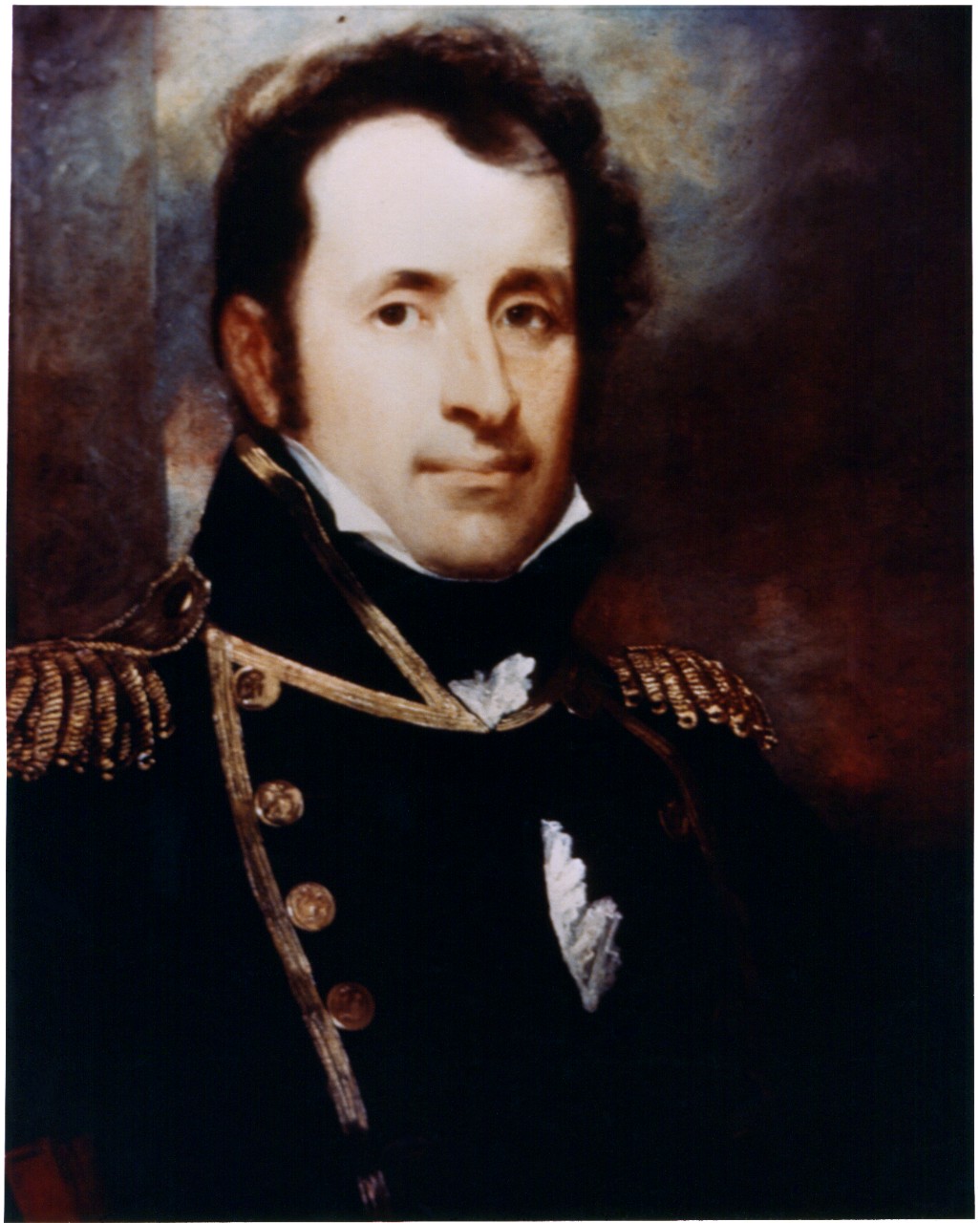 Stephen Decatur is best known for the 16 February 1804 action in Tripoli when, as a lieutenant, he and 75 Sailors set the captured frigate Philadelphia on fire during a daring raid on Tripoli harbor.

Philadelphia had been surrendered to the enemy by her commanding officer, Captain Bainbridge, when she ran aground on a reef off Tripoli harbor. The Tripolitans took the captain and crew captive, and then floated and towed Philadelphia into Tripoli harbor for plundering.

Lieutenant Decatur and his crew, aboard Intrepid, entered Tripoli harbor disguised as a merchant ship flying British colors, with the mission of destroying the Tripolitan’s prize. Under the ruse of losing their anchors in a storm, the cloaked Intrepid was given permission to moor alongside Philadelphia until morning.

A Tripolitan guard’s warning that the ship’s occupants were American came too late as Intrepid’'s crew boarded Philadelphia, overcame the Tripolitans, and set the captured frigate ablaze. Decatur and his crew were later praised for their “performance of the dangerous service assigned them.”

Born in Sinnepuxet, Maryland, on 5 January 1779, Stephen Decatur was appointed a midshipman in the U.S. Navy on 30 April 1798 and served on United States during the Quasi-war with France. He recaptured and destroyed Philadelphia as a lieutenant. He flew the pennant of a commodore during the War of 1812, and captured HMS Macedonian on 25 October 1812. In January 1815, while in command of President, he surrendered his ship to the British after a severe naval engagement and was taken prisoner. Decatur was released after peace was declared with Great Britain, after which he commanded the U.S. Navy Mediterranean squadron and secured the final treaty of peace with the Barbary Powers.

Decatur served as Navy Commissioner from 1816−1820. He was the recipient of congressional recognition and was presented with a sword for his service in Tripoli, and was awarded a gold medal for his distinguished service in the War of 1812. Decatur died in a duel with Commodore Barron on 22 March 1820, in Washington, D.C. He was initially buried in Washington, but was later reinterred in St. Peter’s Churchyard in Philadelphia.

Decatur House and Its Distinguished Occupants

The Death of Commodore Decatur 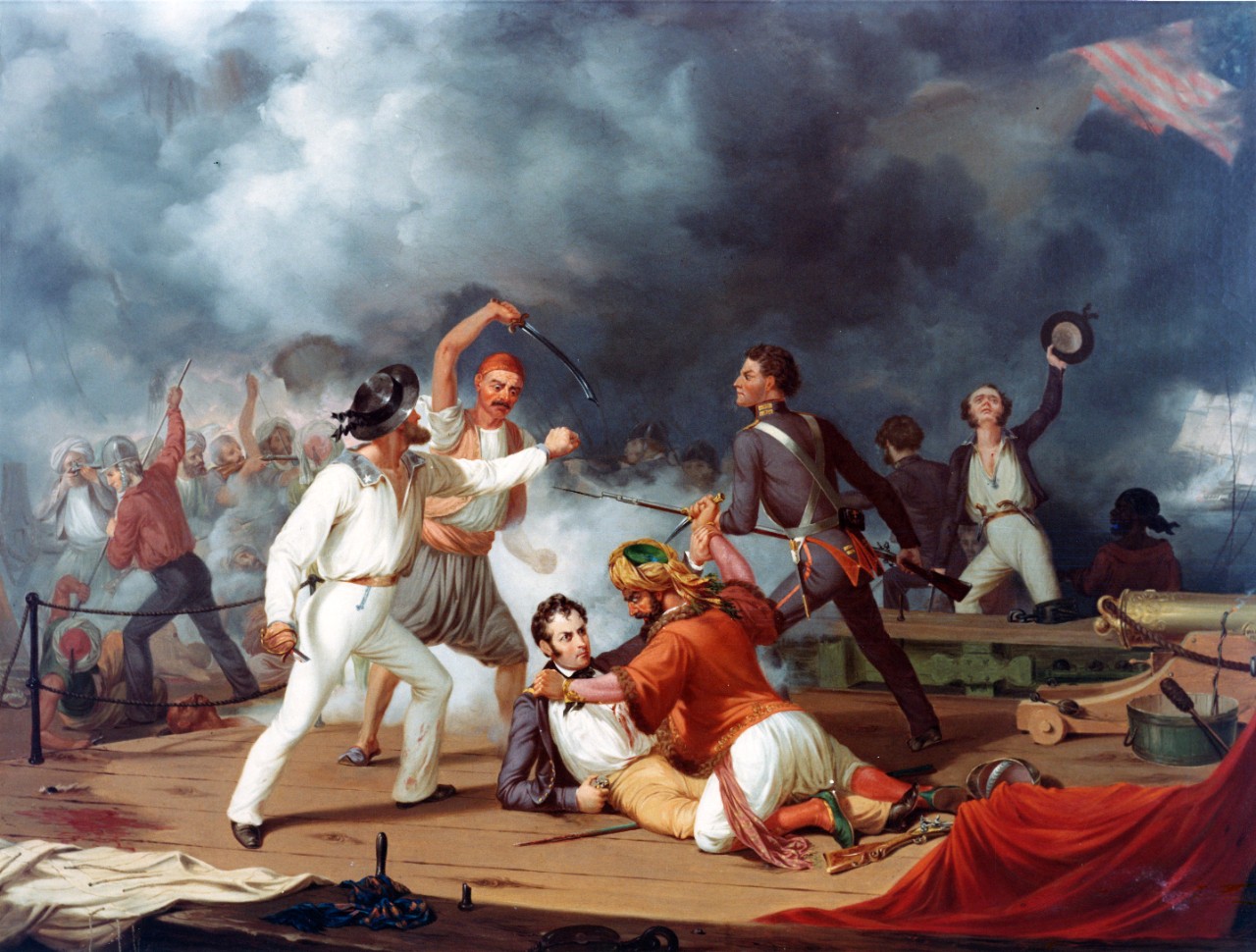 Stephen Decatur's Conflict with the Algerine at Tripoli, during the boarding of a Tripolitan gunboat on 3 August 1804. Oil over print on canvas, 30 by 25, by an unidentified artist, after Alonzo Chappell (1829-1887). Painting in the U.S. Naval Academy Museum Collection. Gift of Chester Dale, 1942. 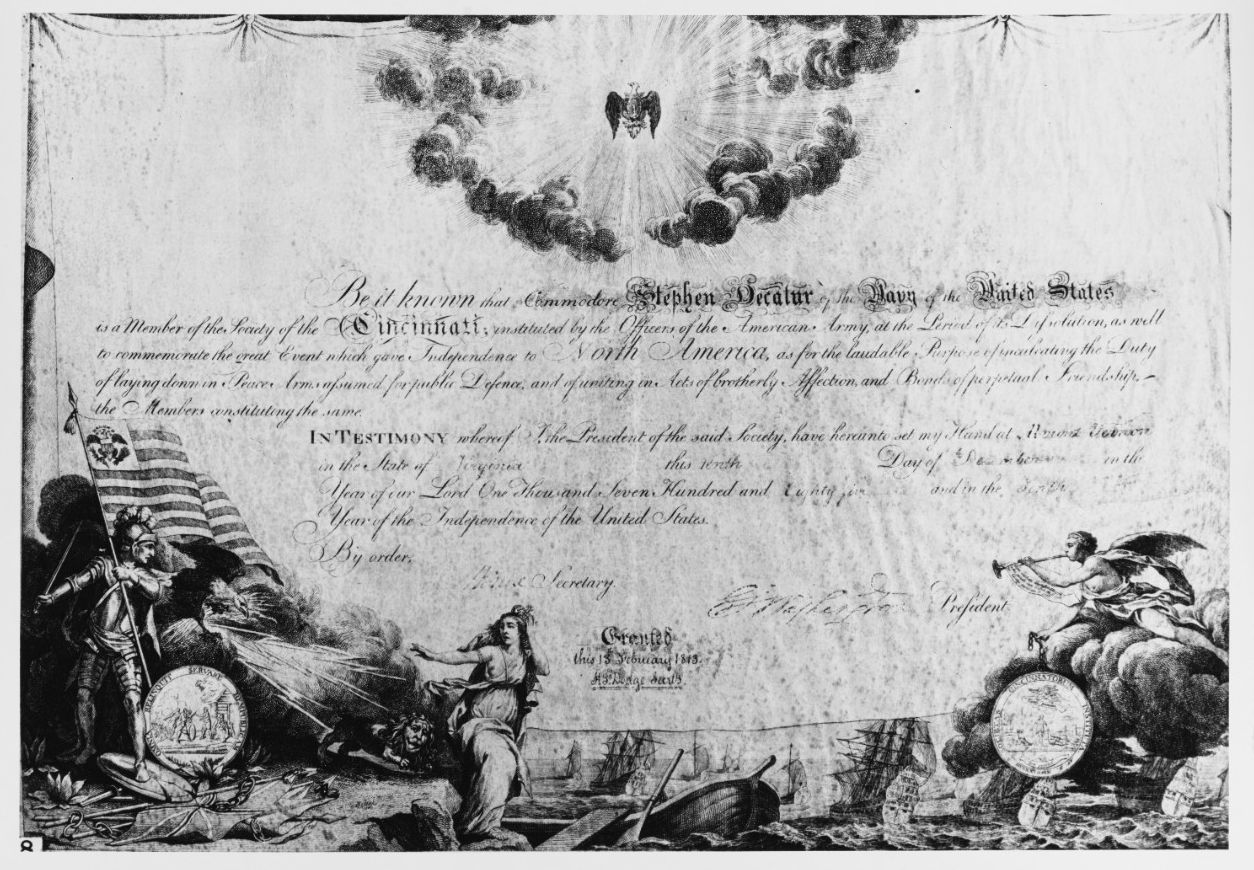 Certificate Awarded to Commodore Stephen Decatur on becoming a member of the Society of Cincinnati, 13 February 1813. 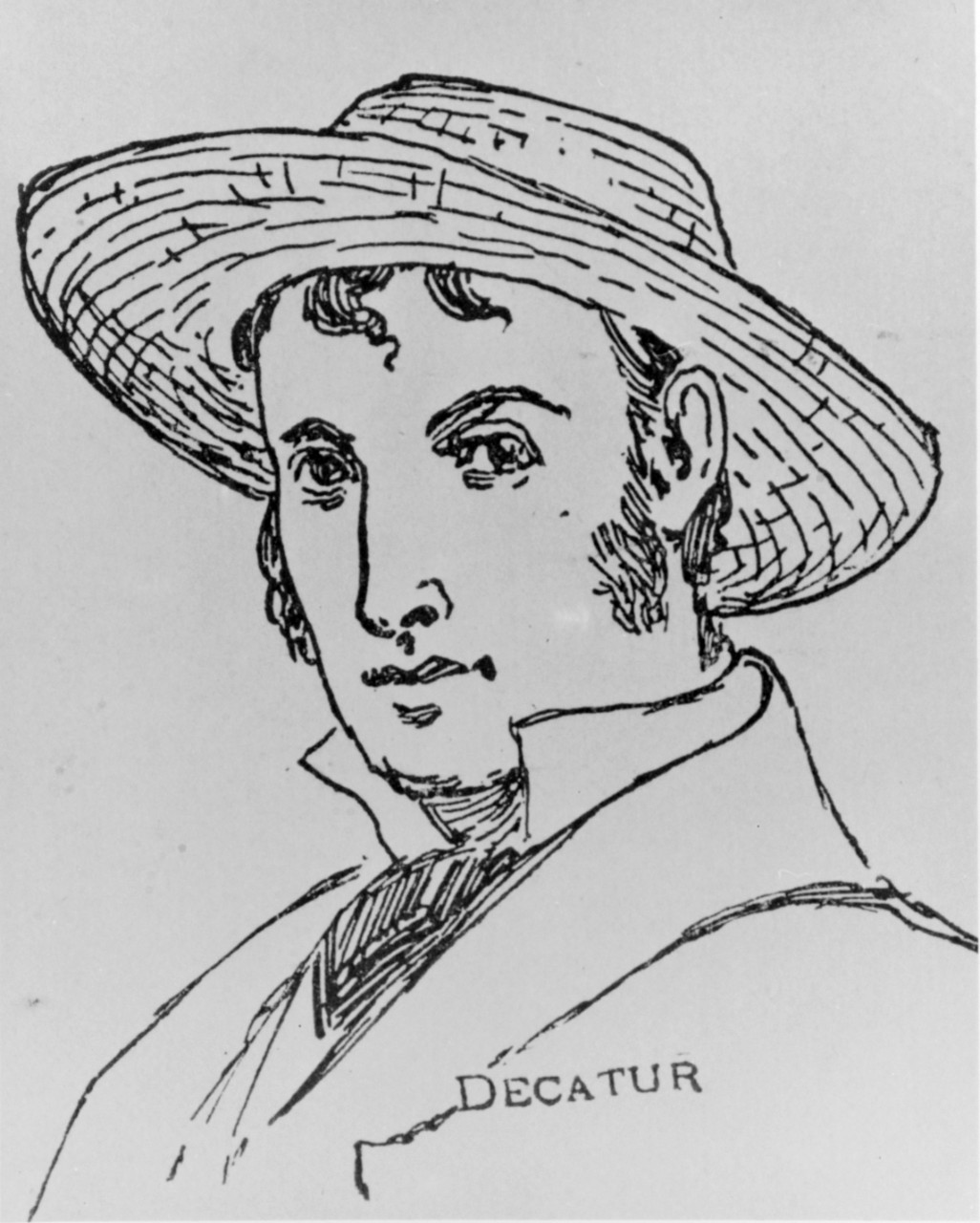 Sketch by Fred S. Cozzens, copied from his book Our Navy Its Growth and Achievements, 1897. It depicts Decatur informally dressed, circa 1804, during the time of the War with Tripoli. 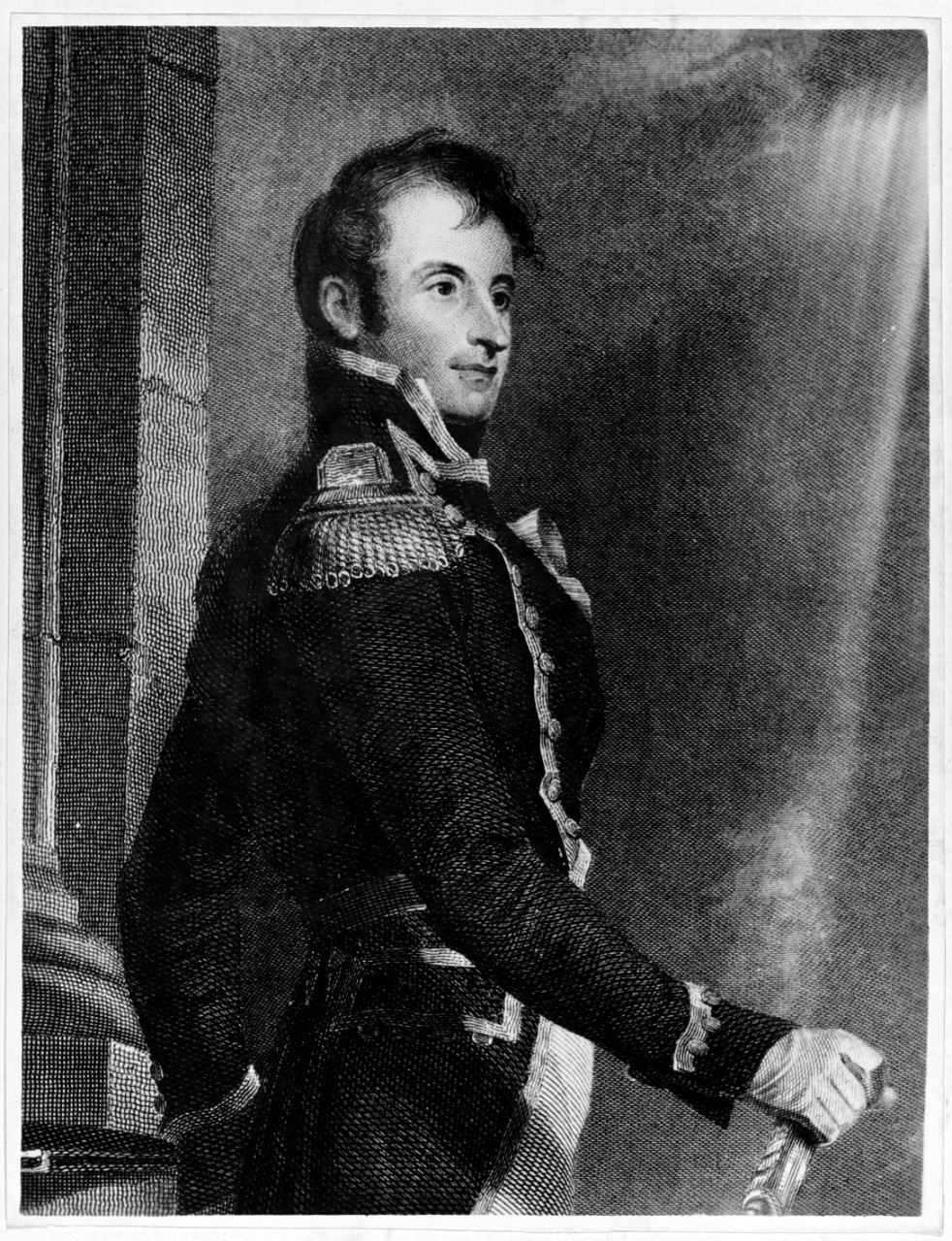 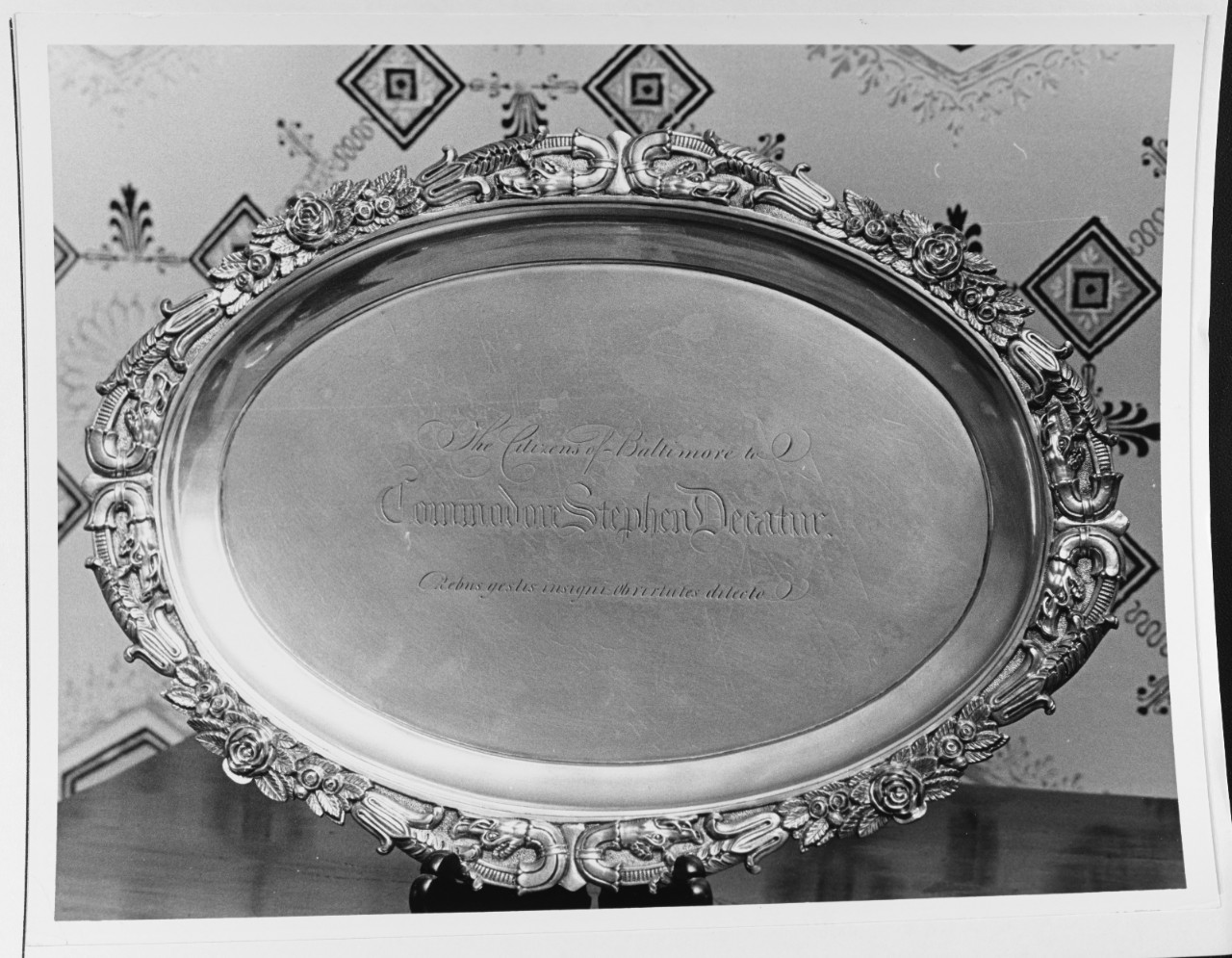 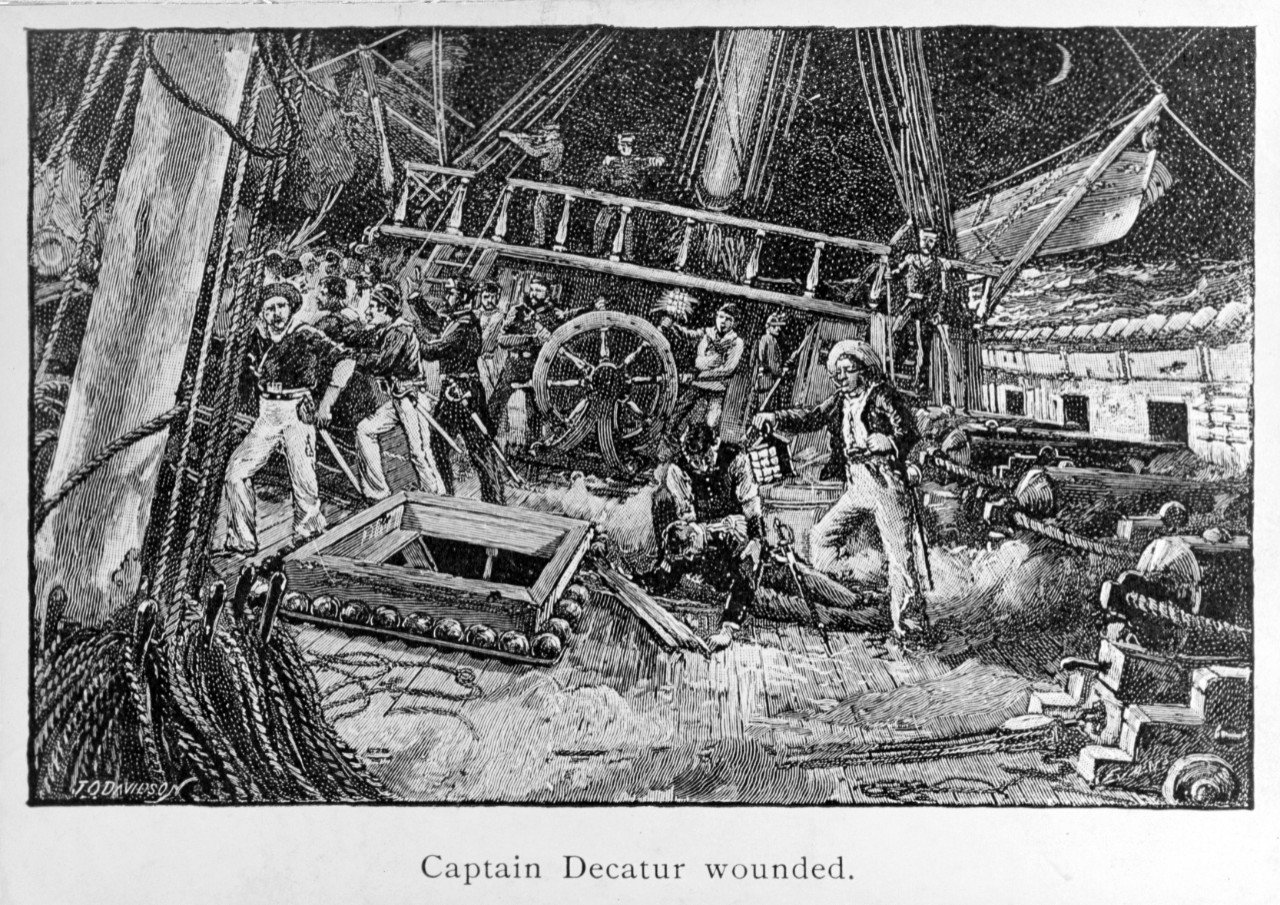 Engraving after an artwork by J.O. Davidson, published circa the later 19th Century, depicting the wounding of Captain Stephen Decatur during the action between USS President, under his command, and a British squadron, 15 January 1815. 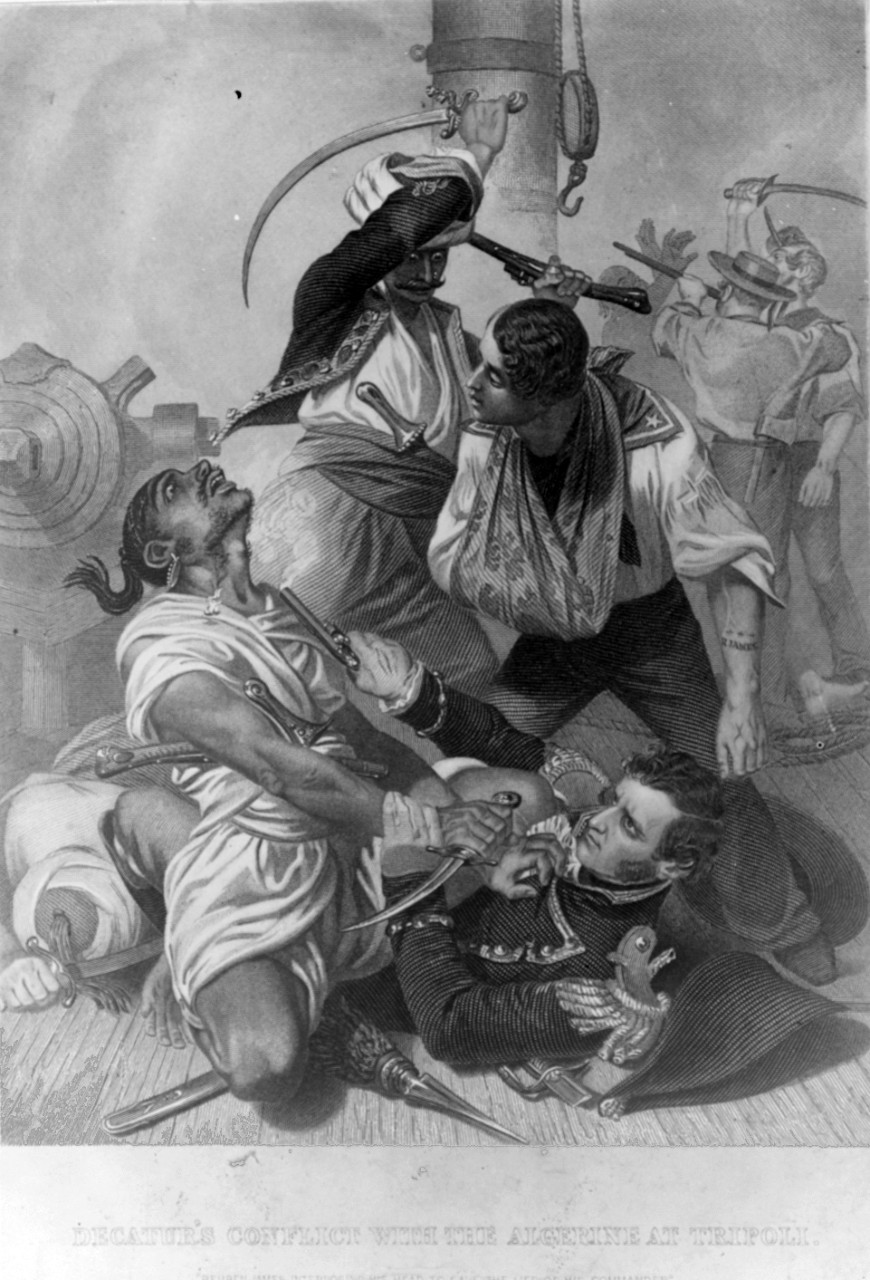 "Decatur's Conflict with the Algerine at Tripoli." "Reuben James interposing his head to save the life of his commander" Engraving, after a painting by Alonzo Chappel, published by Johnson, Wilson & Co., New York, 1874. It depicts Lieutenant Stephen Decatur in mortal combat off Tripoli in 1804, with Boatswain's Mate Reuben James acting to protect Decatur from an enemy swordsman. This incident reportedly took place during the boarding of USS Philadelphia on 16 February 1804, but the scene as depicted more closely resembles the fight to capture a Tripolitan gunboat on 3 August 1804. 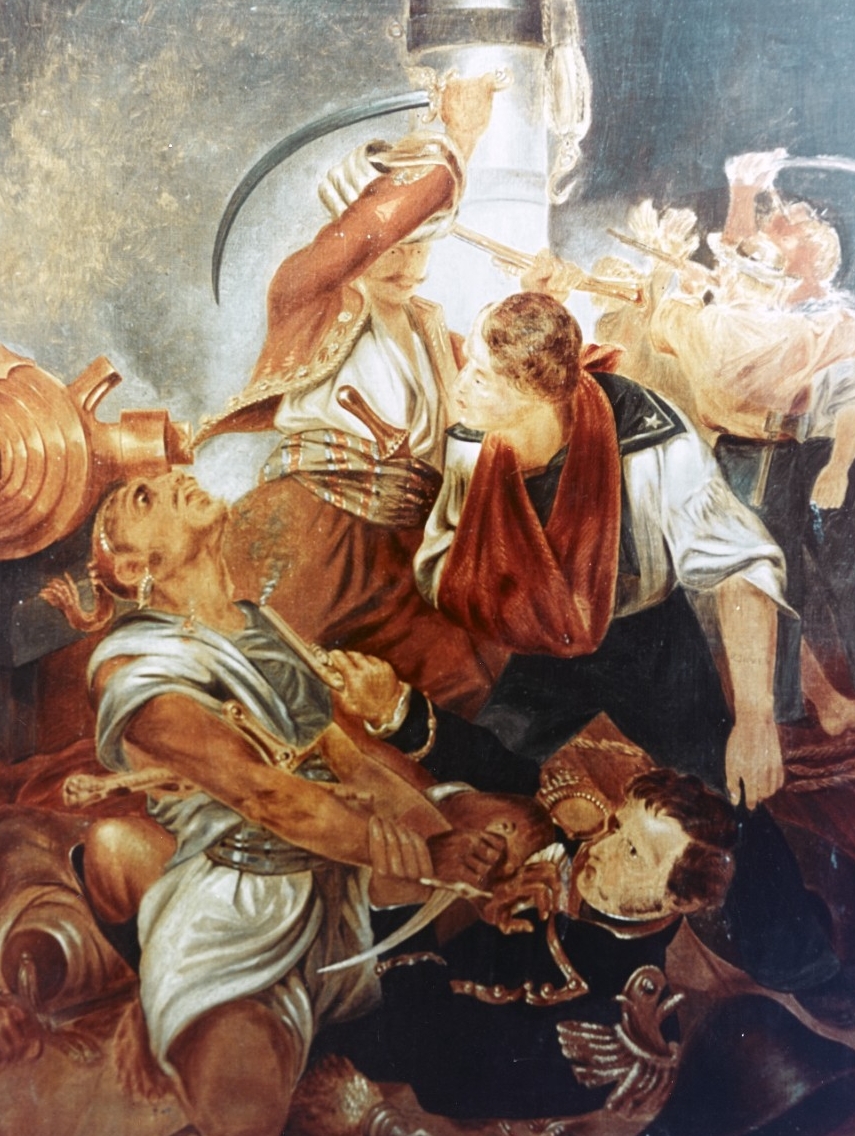 Stephen Decatur at Tripoli, during the boarding of a Tripolitan gunboat on 3 August 1803 Oil on canvas, 29 by 39, by William A.K. Martin (1817-1867), signed and dated by the artist, 1851. It depicts Lieutenant Stephen Decatur in hand-to-hand combat with a Tripolitan. Painting in the U.S. Naval Academy Museum Collection. Gift of Friends of the U.S. Navy, 1941. 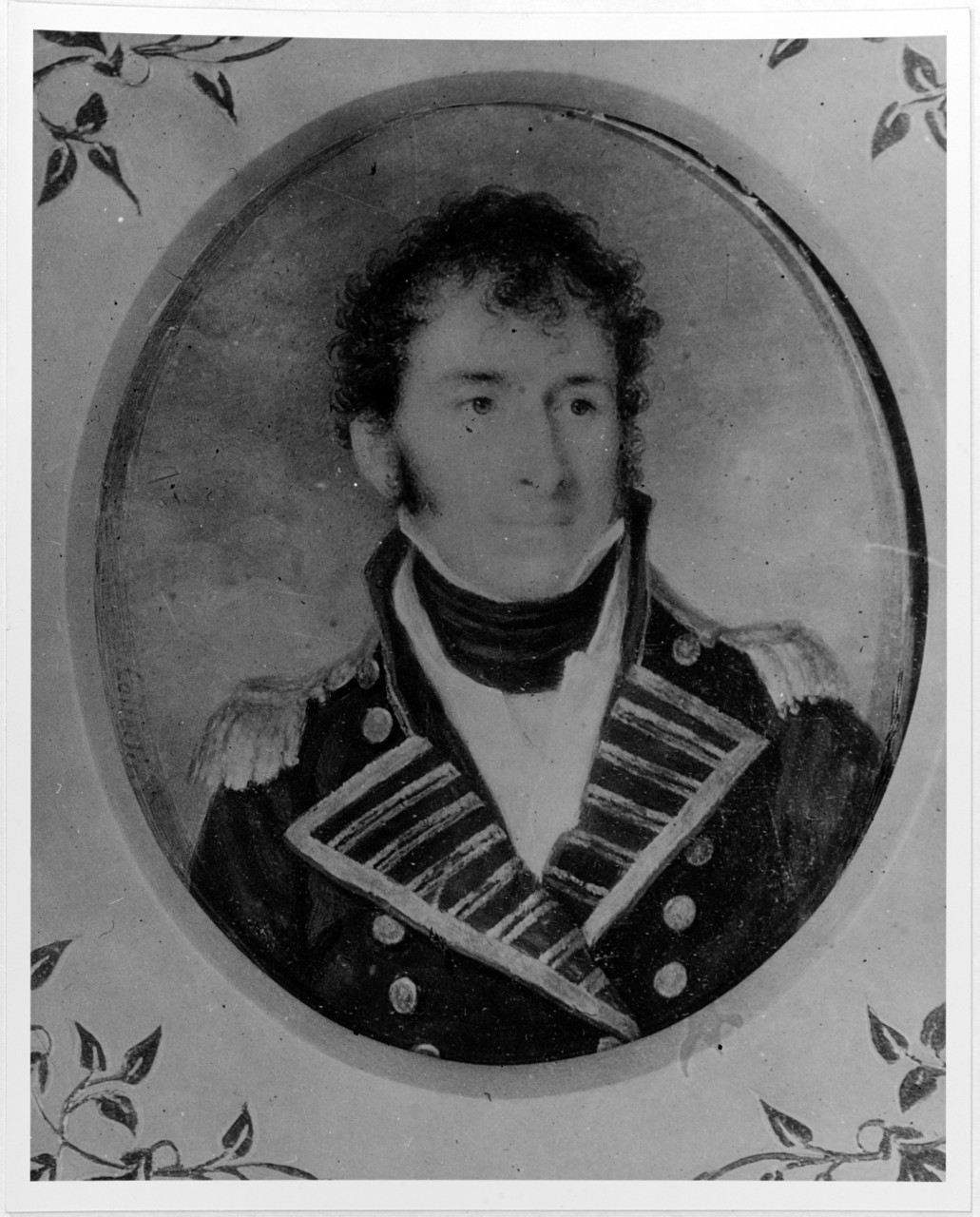 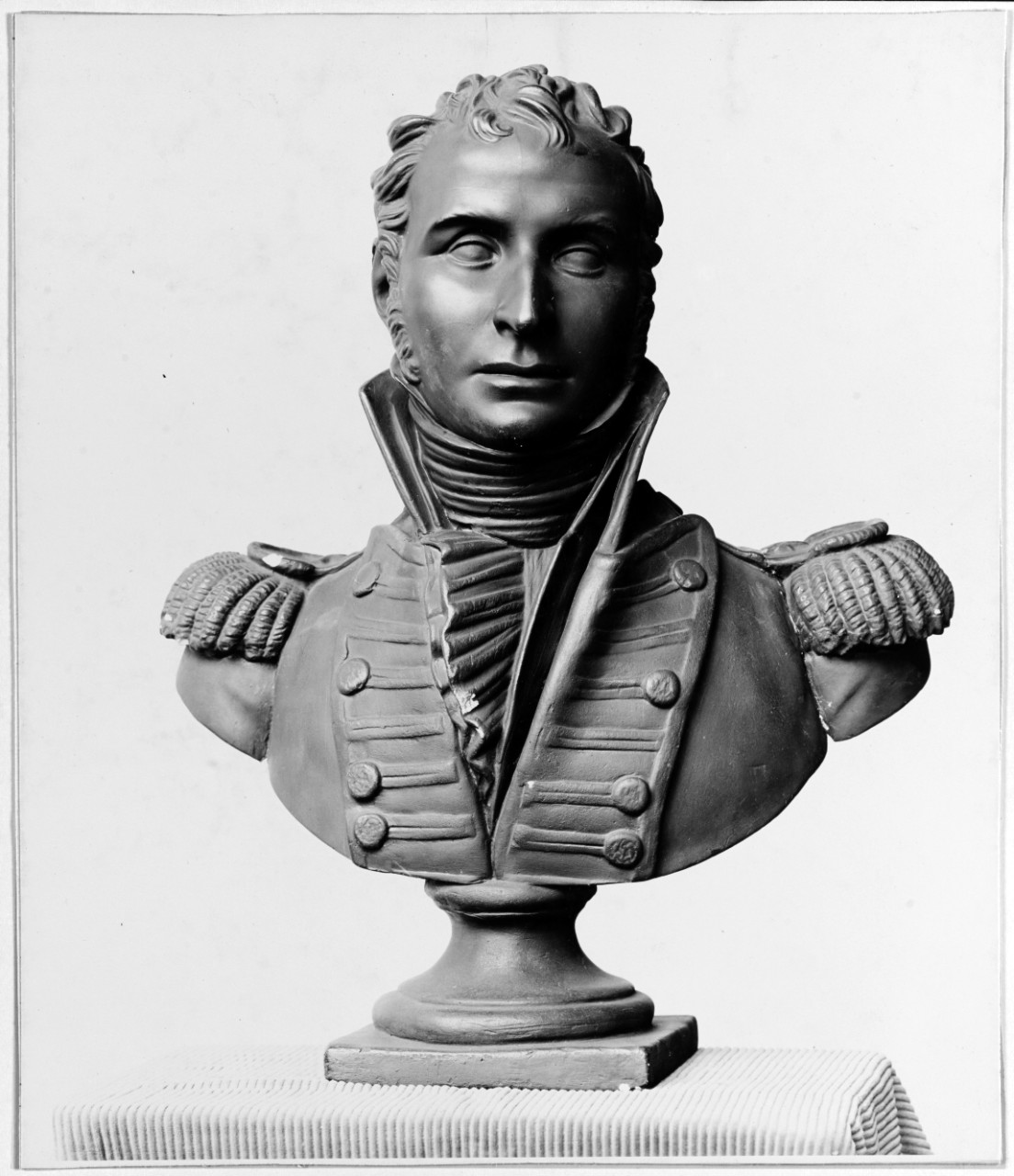 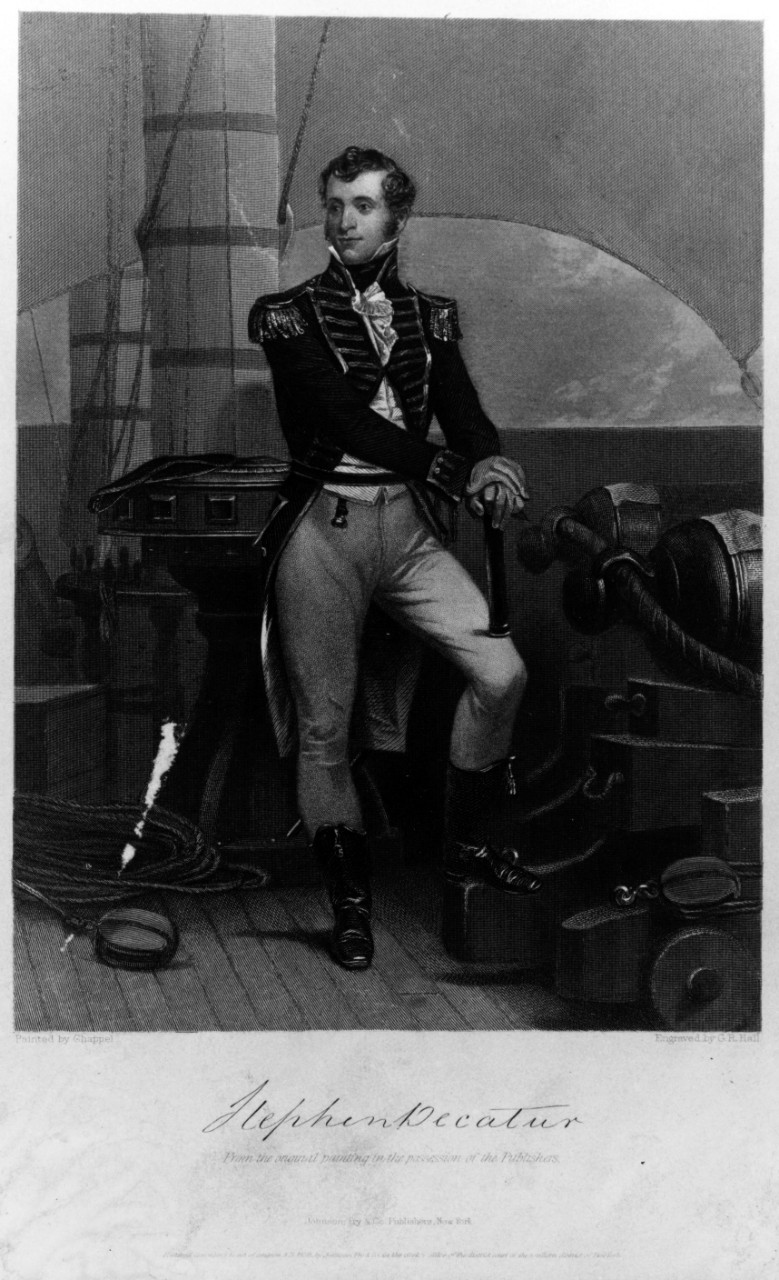 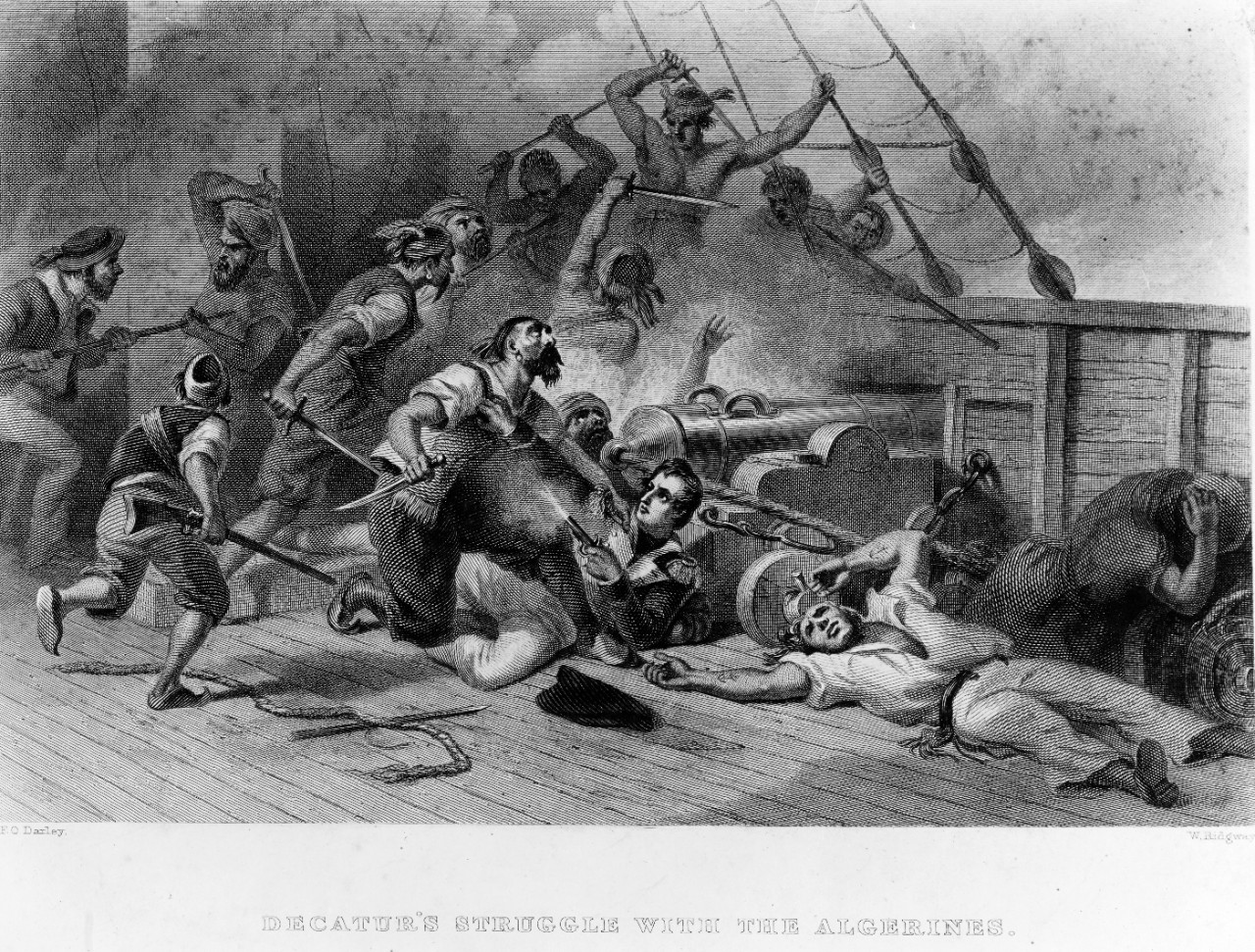 Line engraving by W. Ridgway after an artwork by F.O. Darley, published during the 19th Century. It depicts the battle on board a Tripolitan gunboat during the U.S. Navy's bombardment of Tripoli, 3 August 1804. Lieutenant Stephen Decatur is in the center, engaged in hand-to-hand combat. 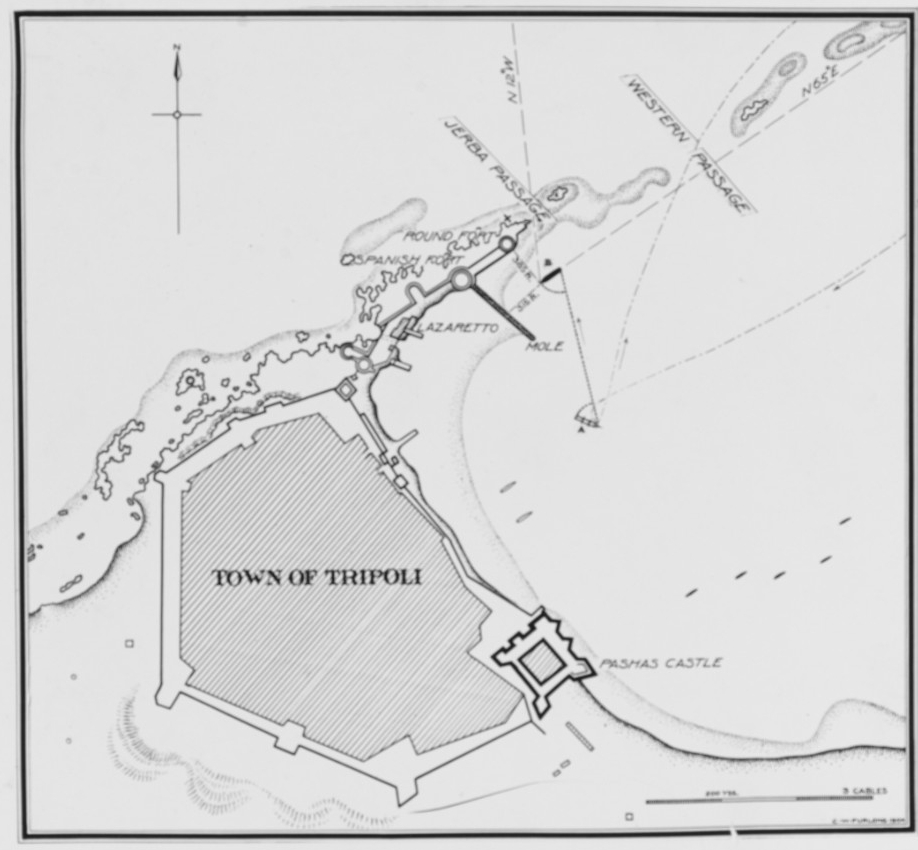 Chart by Charles Wellington Furlong, 1904, depicting (by dot and dash lines) the course followed by the ketch Intrepid, under Lieutenant Stephen Decatur, as she entered and left Tripoli harbor on her mission to destroy the captured USS Philadelphia. Heavy dashed line indicates Philadelphia's drift after she was set afire. Position A marks Philadelphia's position when boarded by Decatur's men, while B is the location of her wreck when Furlong located it about a century later and recovered artifacts. Position X (just west of the Jerba Passage) is the location of Intrepid's wreck after she blew up on 4 September 1804, during another mission into Tripoli harbor.