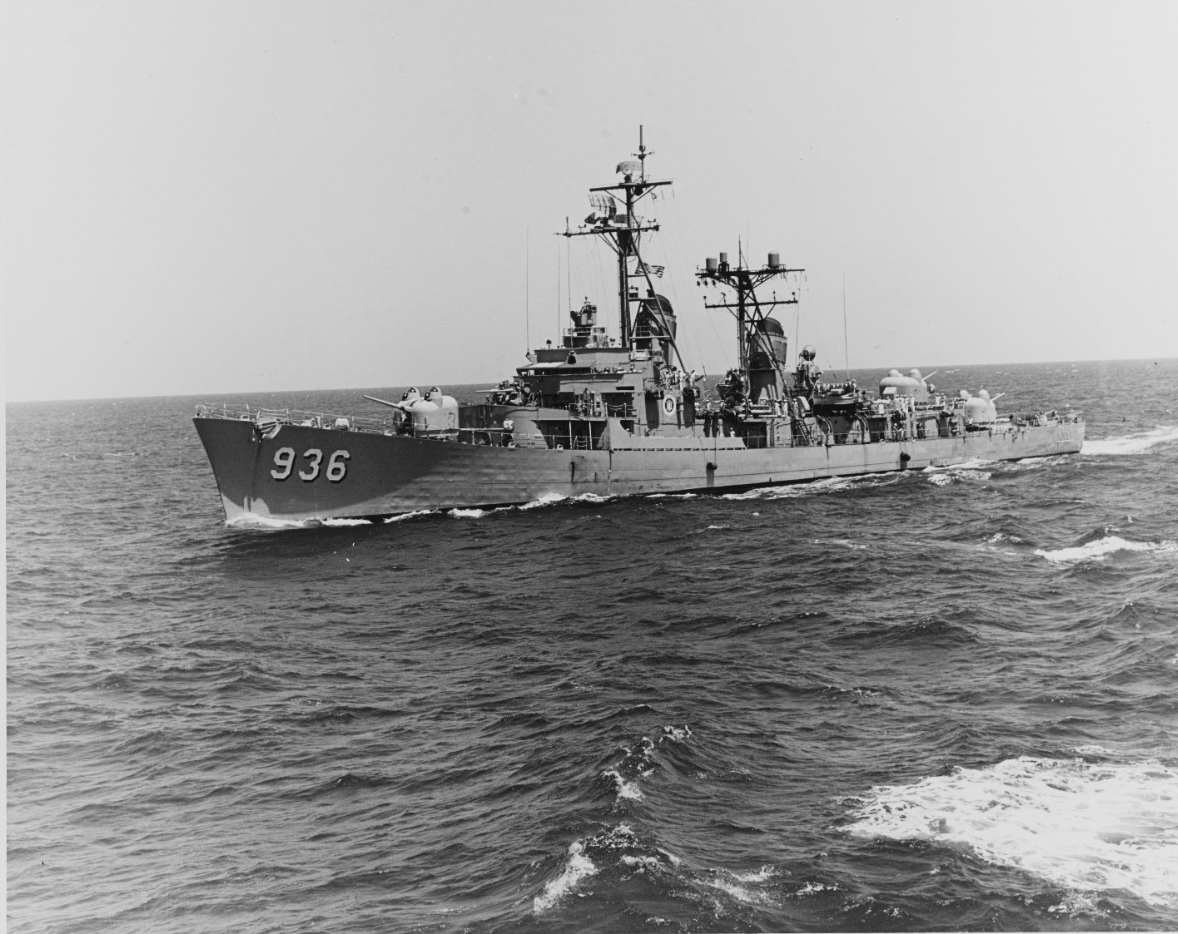 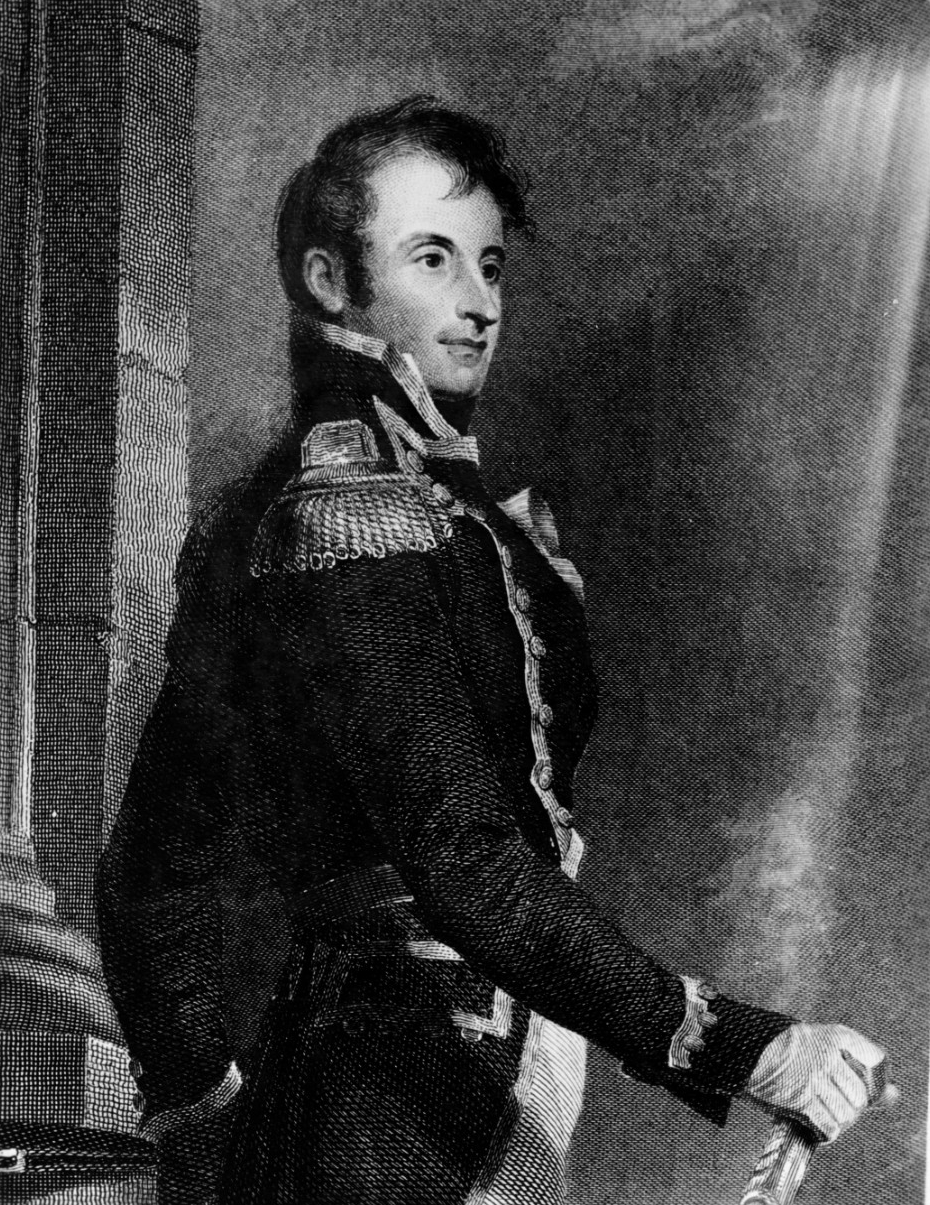 During the War of 1812, he commanded United States, capturing HMS Macedonian in one of the greatest single-ship actions of naval history. He took command of President at New York and attempting to slip through the blockade fell in with a British squadron of five heavy ships. After 2 hours of furious combat the frigate HMS Endymion was silenced but President had suffered such extensive damage that it was impossible to execute an escape. The twice-wounded Decatur reluctantly surrendered, but was paroled, landing at New London 22 February 1815.

Decatur sailed from Newport 3 September 1957 to take part in NATO Operation "Strikeback," calling at Largs and Rosyth, Scotland, before returning to Newport 22 October. She served on local operations until 1 February 1958 when she sailed to the Mediterranean for a tour of duty with the 6th Fleet. She returned to her home port 28 August for east coast operations.

She returned to the Mediterranean for duty between 7 August 1959 and 26 February 1960, then joined in antisubmarine exercises and a midshipman cruise in the Atlantic between March and September. On 6 September Decatur sailed on a cruise which took her north of the Arctic Circle, through the Mediterranean and the Suez Canal, into the Arabian Sea and Indian Ocean, and back to the Mediterranean where she operated with the 6th Fleet. The destroyer returned to Newport in mid-December.

She would continue this pattern of operations, a six-month deployment to the Mediterranean followed by year or so in home waters, for the next three years. A highlight of this period was Decatur's recovery, the first of its kind, of a NASA spacecraft at sea in September 1961. 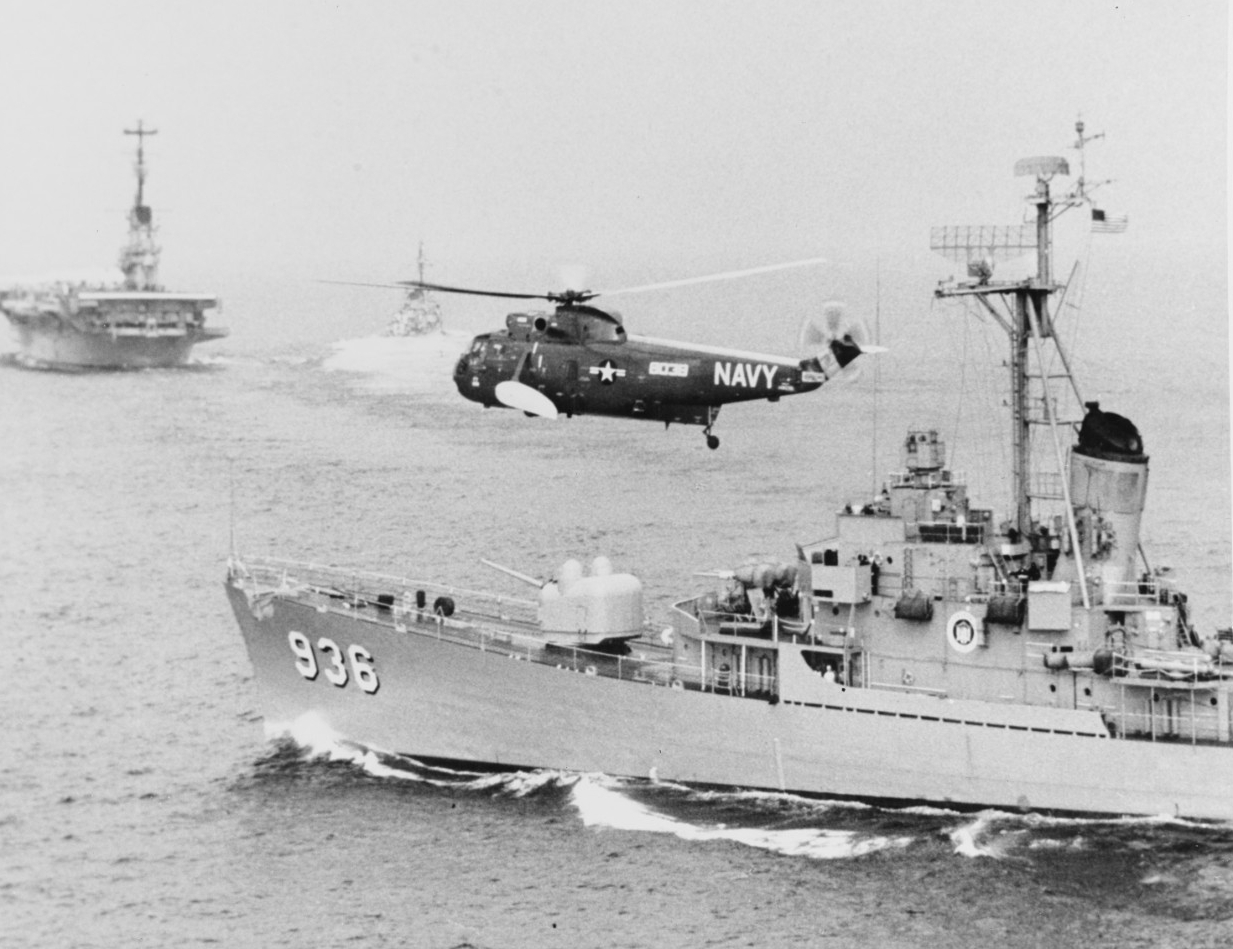 On 6 May 1964, while operating in an ASW exercise off the Virginia Capes, the destroyer suffered severe superstructure damage--both masts were lost over the side and the bridge and both stacks were crushed, remarkably injuring only one sailor--in a collision with Lake Champlain (CVS-39). Towed into Norfolk, she received temporary repairs alongside Shenandoah (AD-26) before returning to Newport at the end of the month. Tapped for conversion to a new class of guided-missile destroyers, Decatur subsequently sailed north to Boston and, after entering the Naval Shipyard in Charlestown, she was placed in reserve on 1 November and then decommissioned on 15 June 1965. While in the yard, conversion work was begun--which included the installation of the TARTAR missile system, new fire control radars, an ASROC system, and new sonar and other electronics equipment--and she was reclassified DDG-31 on 15 September 1966.

Recommissioned on 29 April 1967, Decatur passed her acceptance trials that summer and sailed to her new home port of Long Beach, Calif., on 22 August. After arrival on 26 September, she received a post-shakedown availability and conducted several months of missile firing tests before being pronounced ready for service on 10 June 1968.

On 18 July, Decatur began her first deployment in the Pacific. Arriving at Yankee Station in the Gulf of Tonkin on 23 August, the warship began six months of task force air defense and air traffic control for the carriers and their air groups. In between duties on Yankee Station, she visited Subic Bay, Hong Kong, and Singapore. She returned home, via Australia, New Zealand, and American Samoa, on 26 February 1969.

Following almost a year of local operations, which included visits to Seattle, Pearl Harbor and Acapulco, she returned to western Pacific operations on 10 February 1970. During this cruise, in addition to operations off Vietnam, she visited Taiwan and Japan, before sailing for home on 27 July. She again swung south across the equator, stopping in Australia and New Zealand, before arriving home on 29 August.

After an overhaul the following spring, Decatur spent the summer of 1971 conducting refresher training off the coast of southern California. She got underway for her third WestPac deployment on 1 October and arrived on Yankee Station on 2 November. Much like her last two deployments, the guided-missile destroyer interspersed her support of carrier operations with visits to Subic Bay, Hong Kong, and the occassional foray into the Sea of Japan or the Indian Ocean. She again returned home via the southern ocean and moored at Long Beach on 7 April 1972.

Decatur continued this pattern, a Vietnam cruise followed by refresher training off California, for her next two deployments. These took place between January and July 1973 and from August 1974 to the following January, before she commenced a long overhaul at the Long Beach Naval Shipyard during the spring and summer of 1975. Although the guided-missile cruiser still deployed to the western Pacific following the end of the Vietnam War, Decatur concentrated on operations in the south Pacific and in the South China Sea during her September 1976 to May 1977 WestPac cruise.

She returned to the area in December of 1978, though she then continued on into the Indian Ocean for operations off India and Pakistan. In February 1979, Decatur ventured into the Persian Gulf for a brief visit to Bahrain before sailing on the long voyage home and mooring in San Diego on 8 April. She underwent another overhaul late that year and did not finish qualifications until March 1981.

The guided-missile destroyer started her next deployment on 27 April, but this time sailed to Japan and Korea for exercises before heading south to the Philippines. In August she steamed south across the equator to Australia and New Zealand before returning home on 20 October.

Decatur's last deployment began on 30 October 1982, when she sailed to the Sea of Japan for a complex "War at Sea" exercise. Following a visit to Hong Kong, she sailed south for exercises off Thailand before moving on to the Persian Gulf. Once there, she helped cover tanker traffic imperiled by the Iran-Iraq war, before returning across the Pacific to Pearl Harbor on 7 May 1983.

Owing to her aging machinery, and old weapon systems, Decatur was decommissioned at Pearl Harbor on 30 June 1983. Struck from the Navy list on 16 March 1988, she was transferred to Naval Sea Systems Command for use as an experimental test platform out of Port Hueneme, Calif. The ship was sunk as a target off Hawaii on 21 July 2004.