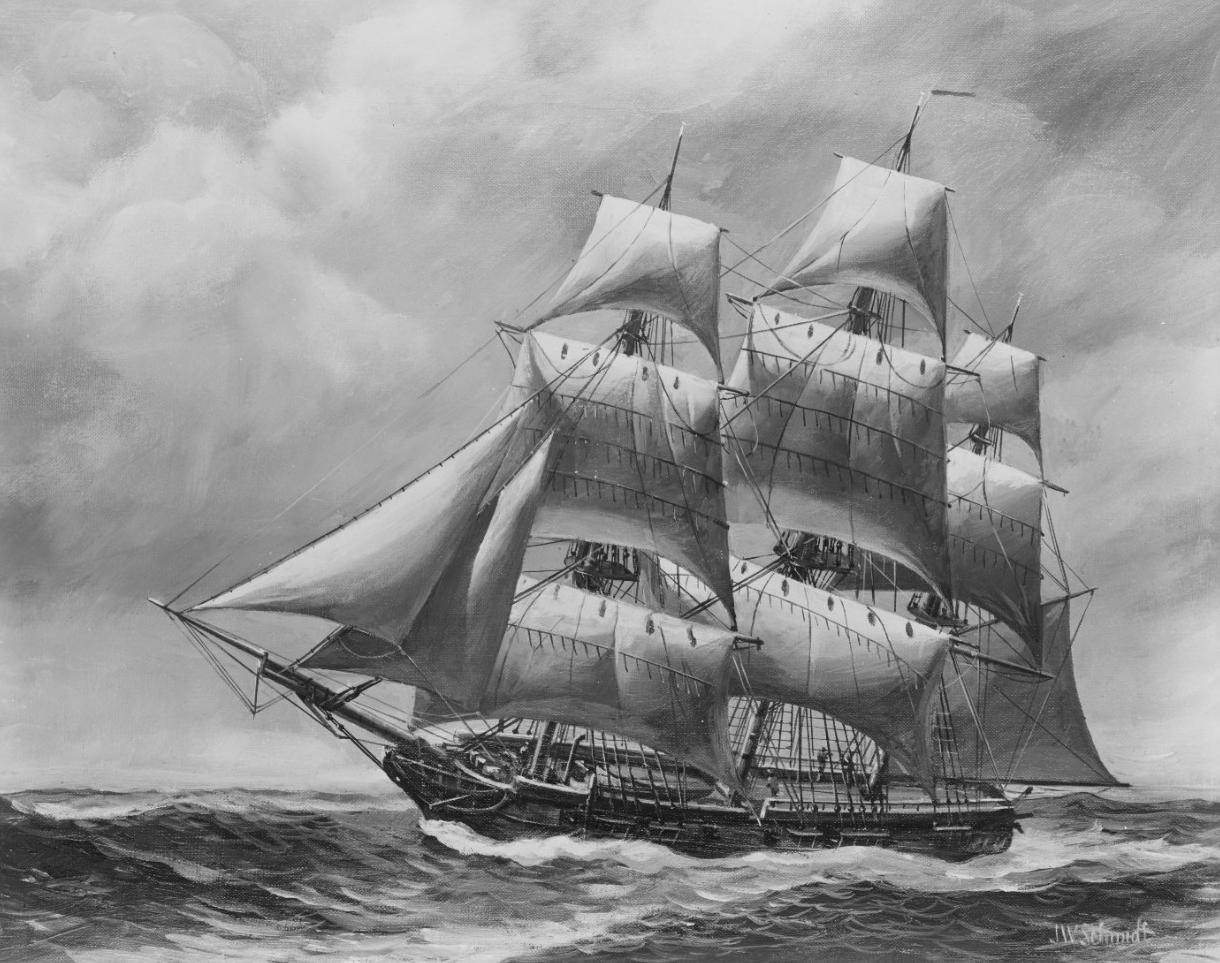 Continental Navy sloop Saratoga was built by Wharton & Humphreys in Philadelphia and launched 10 April 1780. She was the first ship named for the American Revolution battles at Saratoga, New York. Naval History and Heritage Command photograph, NH 108647.

Continental Navy sloop Saratoga was named for British General John Burgoyne’s October 1777 surrender to the Continental Army at Saratoga, New York, during the American Revolution. Considered a turning point for the young American nation, the victory at Saratoga ended a prolonged effort by the British to cut the colonies in two, and it persuaded the French, Spanish, and Dutch to join the cause against a mutual rival. The ship, first to be named Saratoga, was a sloop built at Philadelphia and launched on 10 April 1780. Commanded by Captain John Young, Saratoga departed Philadelphia on 13 August with the ketch Mercury that was sailing for Europe. Mercury was carrying former President of the Continental Congress Henry Laurens, who was planning to seek money on the European continent to finance the American government. Saratoga escorted the ship until she was well out at sea and then allowed her to proceed the rest of the voyage alone. Ultimately, Mercury was captured about a month later by the British before she was able to make it to Europe, and Laurens and the crew were imprisoned in England after dispatches were discovered on their intent. Saratoga, after parting ways with Mercury, spent more than two weeks east of the Atlantic shipping lanes training on their new ship.

On the afternoon of 9 September, a lookout spotted a sail to the northwest, and Young ordered his ship to advance towards the unknown vessel. By twilight, he was close enough to see that the ship was flying British colors. About two hours later, Saratoga closed within hailing distance. Young learned the ship was the Royal Navy’s brig Keppel, which had no intention of surrendering to the American ship. Saratoga opened fire with a broadside, which was quickly answered by the British brig beginning a three-hour, inconclusive battle. During the action, gale force winds prevented Saratoga’s guns from inflicting serious damage to her adversary and the British brig managed to evade Young’s repeated efforts to close within boarding distance. Finally, as midnight approached, Young ordered his ship to head for home. Three days later, as Saratoga approached Cape Henlopen off the Delaware coast, she overtook the British ship Sarah that was bound for New York loaded with rum from the West Indies. The merchantman surrendered without a fight. The two ships proceeded into the Delaware and then anchored off Chester, Pennsylvania, the following afternoon. The prize and her cargo were promptly condemned and sold, which provided desperately-needed funds to refit Continental frigate Confederacy that had been completely dismasted and almost lost in November 1779 while transporting the French Minister and his wife back to France.

During the three days at Chester, Saratoga replenished her stores and took on an additional ballast before heading back down the Delaware toward the open sea. She cleared the Delaware capes on 18 September and sailed north along the New Jersey coast. About a week later, she recaptured the 60-ton American brig Elizabeth, which was taken in the Chesapeake Bay several weeks earlier by British privateer Restoration. Young, subsequently, sent Elizabeth to Philadelphia under a prize crew. Saratoga remained in the vicinity without encountering any further action, and toward the end of the month turned south cruising parallel to the coast. On 10 October, during a fierce storm, Saratoga managed to only suffer superficial damage while a British squadron was decimated. Young had constantly exercised his crew on the ship’s guns and rigging to sharpen their seaworthy and fighting capability. The training paid off, and the crew proved their seamanship during the heavy seas event.

Later that night, Saratoga turned north again, and at dawn on the following day spotted two sails off her port bow. As Saratoga closed the distance, Young ordered his helmsman to head for the open water between the two enemy ships, which proved to be 22-gun letter-of-marque Charming Molly and schooner Two Brothers. When Saratoga managed to get between the ships, Young ordered Charming Molly to surrender, but her captain adamantly refused. After the American ship fired her broadside into the British vessel, a boarding party came aboard Charming Molly’s deck and opened a fierce hand-to-hand fight that ultimately compelled the British captain to lower his colors. An American prize crew took the place of Charming Molly’s leadership and some of its crew, and then Young gave chase to the fleeing Two Brothers, which ultimately surrendered without resistance and was sent to Delaware.

From the prisoners captured on Charming Molly, Young learned that the two ships had been part of a small merchant fleet that had sailed from Jamaica and had been scattered by the recent storm. As a result, as soon as his crew had finished temporary repairs to Charming Molly's battle-damaged hull, Saratoga began to search for the rest of the scattered enemy merchant fleet. Shortly thereafter, a lookout spotted three sails slowly rise above the horizon dead ahead. As Saratoga approached the vessels (the remainder of the Jamaica fleet), Young ordered his helmsman to head between two of the ships. As Saratoga passed between the British ships, she fired both broadsides. The enemy’s fire passed above Saratoga, causing only minor damage to her rigging while the first American salvo immediately knocked brig Nancy out of the fight and did substantial damage to the other vessel, which surrendered after taking another volley. Meanwhile, the third ship raced away, but Young, busy with his two new prizes, allowed her to escape without pursuit.

Saratoga’s crew labored tirelessly to repair the battered hulls of the prizes before they were sent to Delaware. Later that night, Saratoga was underway heading north. The following morning, near Cape Henlopen, a bluejacket reported seeing two unknown sails, one dead ahead and the other several miles off her port quarter. The first was identified as American brig Providence (then a British prize heading for New York), and the second was 74-gun British ship-of-the-line Alcide. Although Alcide was in close proximity, Young set out after Providence, and after an hour’s chase recaptured her. Young put a prize crew on Providence, and then Saratoga headed back to the Delaware where she anchored at Chester on 14 October.

After refitting at Philadelphia, Saratoga was underway on 15 December for Hispaniola to load French military supplies that were awaiting transportation to America. New officers and crewmembers were onboard to replace those who had left the ship to man all of prizes Saratoga had captured. On 21 December, an unknown sail was reported and Saratoga set out to investigate. Within two hours, she reached firing range and sent a warning shot across the ship’s bow. Instead of surrendering, the unknown ship, which turned out to be British privateer Resolution, maneuvered to attack. Then, both ships fired at each other instantaneously. The gunner’s both fired high, but the American ship suffered only superficial damage while Saratoga’s broadside damaged the privateer’s hull and superstructure, forcing her to surrender. Young embarked the privateer’s crew as prisoners and placed an American crew on the prize. The two ships then headed to Cape Henlopen, which they reached on New Year’s Day 1781. Young turned over the prisoners and departed the same day for the Caribbean.

On the morning of 9 January, in a fierce battle off the coast of England’s Royal Province of East Florida, Saratoga captured Tonyn, a 20-gun letter-of-marque that had recently sailed from St. Augustine laden with turpentine, indigo, hides, and deerskins intended for Liverpool. Young’s crew repaired the prize and their own ship’s rigging before both ships were underway on 11 January for Hispaniola. On 16 January, Saratoga captured, without resistance, armed brig Douglas that was carrying wine from Madeira to Charleston, South Carolina—an important southern port that had fallen into British hands. Young sent the prize to Philadelphia.

On 27 January, Saratoga and the prize Tonyn reached Cap-Français (Haiti), where Young turned Tonyn over to the French Admiralty Court. He arranged to have Saratoga docked to have her hull scraped and coated with pitch while awaiting the arrival of the military cargo and French frigates to assist in convoying the supplies. Meanwhile, the governor of the French colony of Saint Dominique suggested that Saratoga join sister Continental frigates, Deane and Confederacy, American privateer, Fair American, and French naval brig, Cat, in a cruise through the windward passage to Jamaica. The fleet departed Cap-Français on 20 February and returned eight days later with a prize, Diamond.

By mid-March, all was ready. The French frigates were on hand; the Continental warships were loaded; and 29 heavily-laden merchant ships were in the harbor awaiting escorts. The convoy departed Cap-Français on 15 March, and three days later, a lookout on Saratoga's deck reported two sails far off to the west. Saratoga left the convoy in pursuit of the unknown ships. By mid-afternoon, she caught up with one of the fleeing ships, which surrendered without a fight. Young placed an American crew onboard the prize and began to chase the second vessel. The prize crew later reported that, as they attempted to follow Saratoga, the wind suddenly rose to “fearful velocity” and almost capsized the prize. When they managed to get the ship back under control, no trace of Saratoga could be found. Ultimately, all hands were lost. No further details of Saratoga’s fate have ever been discovered.