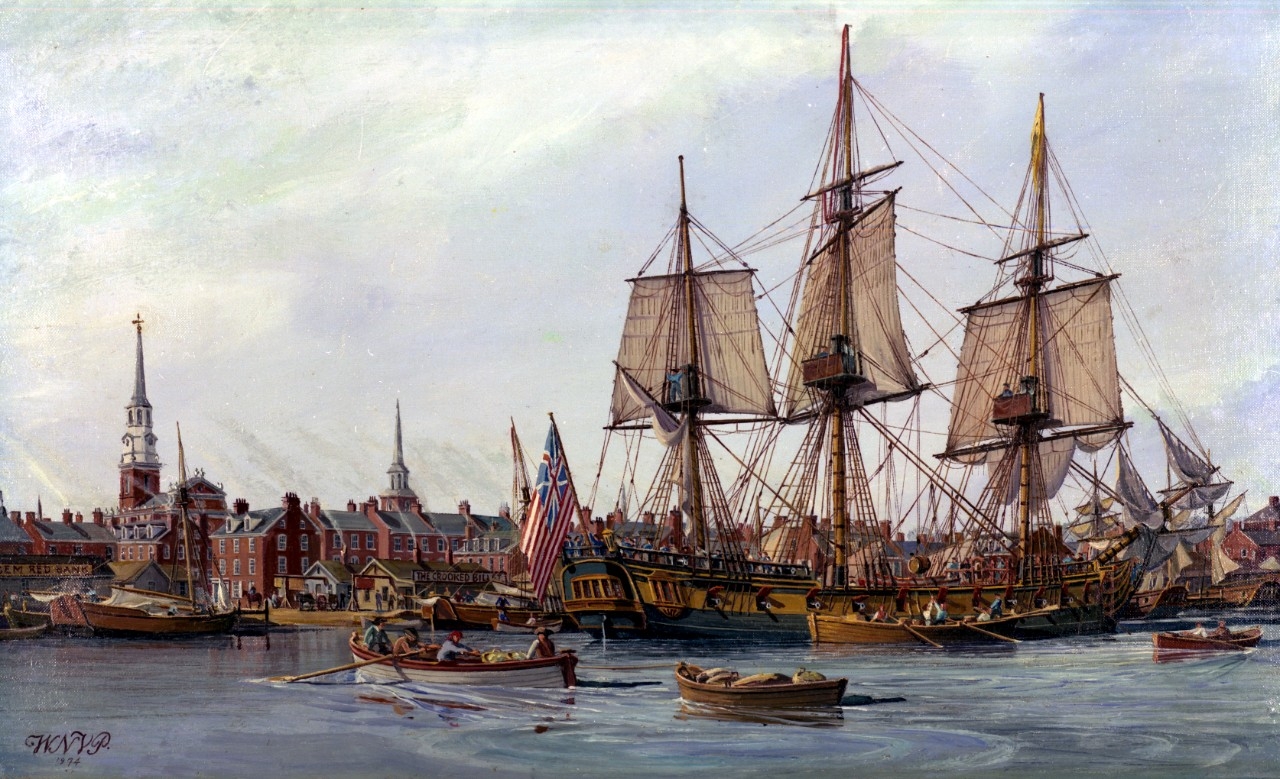 Originally the ship-rigged vessel Black Prince, Alfred, named for the youngest son of Aethelwulf, King of the West Saxons, was originally built at Philadelphia in 1774. With tensions with Great Britain rising, the Continental Congress authorized the fitting out of two American warships (10-guns each) to provide much needed supplies to the ill-equipped Soldiers of George Washington’s Army. Congress later decided to add two more ships to the American Navy inventory, one of 20-guns and the other slightly larger. Alfred was the latter ship. She was ordered to be converted to a man-of-war. John Barry, the ship’s former master, was placed in charge of her rerigging; Joshua Humphreys was selected to superintend changes strengthening her hull, timbers, and bulwarks as well as opening gunports; and Nathaniel Falconer was responsible for her ordnance and provisions. Soon other vessels joined Alfred—Columbus, Cabot, Andrew Doria, and the sloop Providence. Esek Hopkins, a veteran master merchantman from Rhode Island, was named commodore of the squadron. Alfred, Hopkins’ flagship, was placed in commission on 3 December 1775 with Captain Dudley Saltonstall in command. The young John Paul Jones served on the ship as a lieutenant. He hoisted the Grand Union flag on Alfred the day she was commissioned in Philadelphia.

As flagship of America’s first Navy squadron, Alfred and her cohorts dropped down on the Delaware River on 4 January 1776, but a cold snap froze the river and the bay. Maneuvers came to a standstill until some six weeks later when the fleet finally broke winter’s icy grasp, and they set sail for their first operation. The Marine Committee ordered Hopkins to sail for Hampton Roads to attack British warships that were harassing American shipping in Virginia waters. Their follow-on orders were to do the same at Charleston, South Carolina, and then to head for Rhode Island. However, by the time the ships were free from the icy waters, growing British strength in the Chesapeake Bay prompted Hopkins to head to the West Indies. He was given the option of disregarding the original orders if they proved impossible, and he had the discretion of planning an operation of his own. Hopkins knew the American colonies desperately needed gunpowder, so he decided to attack the island of New Providence in the Bahamas to capture a large supply of that commodity as well as other military supplies reportedly stored there. A fortnight after leaving the Delaware capes, Hopkins arrived off Nassau on the morning of 3 March and captured Fort Montague without resistance. Continental Marines, under the command of Captain Samuel Nicholas, joined Hopkins’ Sailors in America’s first amphibious operation.

After Fort Montague was secured, Hopkins issued a proclamation that promised not to harm “…the persons or property of the inhabitants of New Providence…” if they did not resist. The following morning, Governor Montfort Browne surrendered Fort Nassau, but only after he had moved most of the island’s precious gunpowder supply to St. Augustine, Florida. After Hopkins stripped the forts of their remaining guns and ordnance, Alfred led the American fleet homeward on 17 March, the same day British troops were evacuating Boston. On 4 April, during their homeward voyage, Hopkins’ ships captured the six-gun British schooner Hawk and eight-gun bomb brig Bolton. Shortly after midnight on 6 April, the fleet encountered 20-gun HMS Glasgow. The British frigate, which was carrying dispatches ordering the British to withdrawal, put up a fierce fight that enabled her to escape the more powerful American squadron. At the onset of the battle, Alfred’s tiller ropes were cut by cannon fire leaving Hopkins’ flagship unable to maneuver or give chase. Ultimately, Glasgow disappeared over the horizon and she eventually reached Newport, Rhode Island, without further incident. When Alfred and her cohorts finally reached New London, Connecticut, on 8 April, the American public welcomed them as heroes. However, many of the officers of the American squadron voiced their dissatisfaction with Hopkins, and he was later relieved of command of the ship.

Alfred was inactive throughout the summer of 1776 for a number of reasons, mainly due to the shortage of funds and men to operate the ship. On 7 August, Jones, now a captain who had helped fit out the ship and served on her during the seizure of New Providence, was placed in command of Alfred. She departed Providence on 26 October in company with 14-gun brig Hampden, but that vessel struck a sunken rock before they were even able to leave Narragansett Bay and had to return to Newport. Her officers and men then shifted to Providence, accompanying Alfred to waters off Canada’s Cape Breton Island, which they reached by mid-November. While there, they took three prizes: brigantine Active, bound from Liverpool to Halifax with an assorted cargo; armed transport Mellish, laden with winter uniforms for British troops at Quebec; and Kitty, bound from Gaspe to Barbados with fish and oil. However, due to several leaks, Providence was forced to sail home thereafter, and Alfred continued the cruise on her own.

On 22 November, Sailors on boats from Alfred raided Canso, Nova Scotia, where they burned a transport bound for Canada with provisions and a warehouse full of fish oil. They also captured a small schooner to replace Providence. Two days later, Alfred captured three colliers off Louisburg, bound from Nova Scotia to New York with coal for the British army and, on 26 November, captured 10-gun letter-of-marque John of Liverpool. On Alfred’s homeward voyage, she was pursued by HMS Milford, but managed to escape after a four-hour chase. She arrived at Boston on 15 December and began a major refit.

In May 1777, Captain Elisha Hinman became Alfred’s next commanding officer, but the ship did not get underway until 22 August when she sailed for France with the frigate Raleigh to obtain military supplies. While en route, they captured four small prizes. They reached L’Orient on 6 October, and on 29 December, sailed for American shores. They proceeded via the coast of Africa, where they took a small sloop, and then headed for the West Indies, hoping to collect more prizes before sailing northward for home. On 9 March 1778, they encountered British warships Ariadne and Ceres. As the American ships began to flee, Alfred fell behind. Shortly after noon, the British caught up with Alfred and after a half-hour’s battle, forced her to surrender. After Alfred was captured, they took her to Barbados where she was condemned and sold. She was later purchased by the Royal Navy and renamed HMS Alfred (20-guns). She was sold again in 1782. 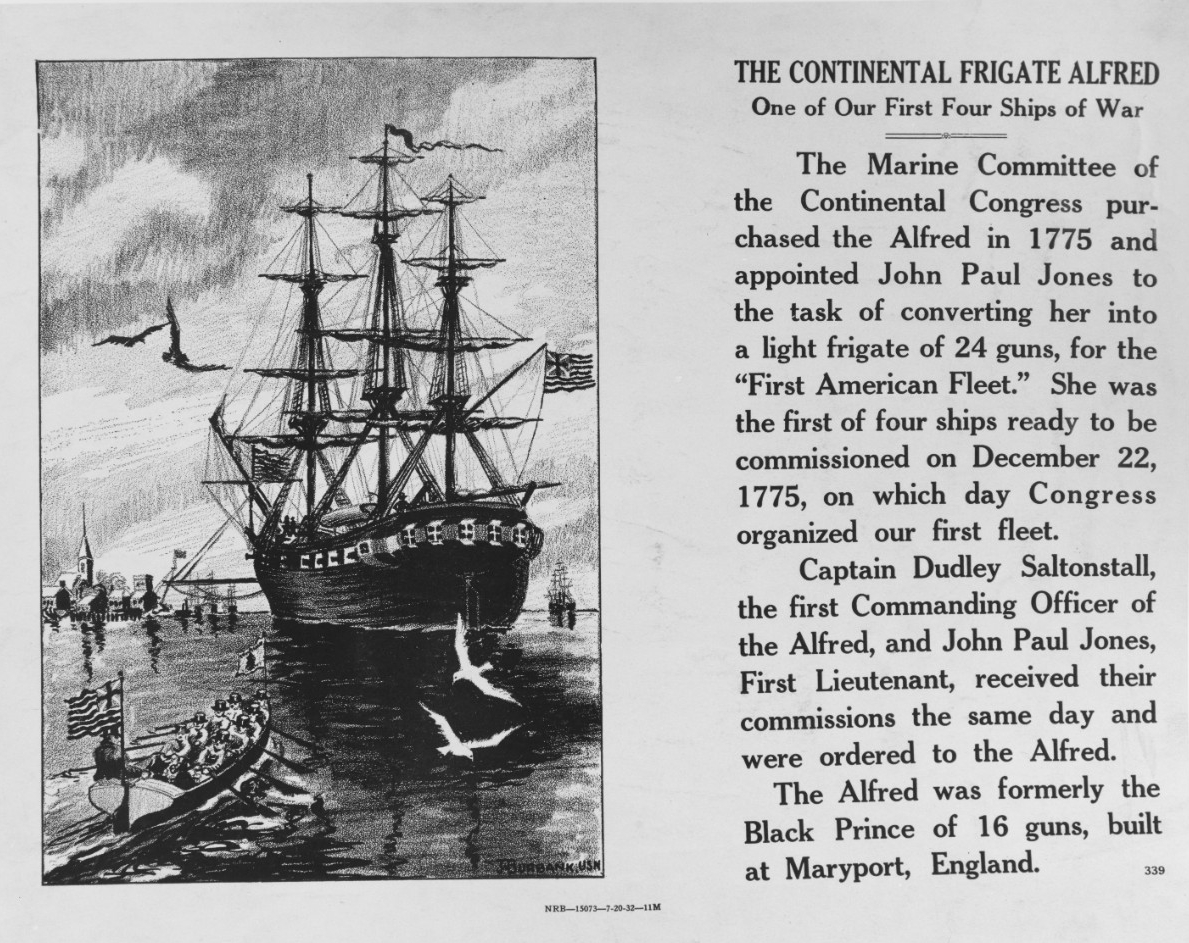 Recruiting poster for Continental ship Alfred, one of America’s first ships of war. The poster shows an illustration of Alfred by J. Burbank. The caption on the poster describes her conversion and commissioning in 1775 for the “First American Fleet,” as well as the appointment of Captain Dudley Saltonstall as the first commanding officer of Alfred with John Paul Jones as lieutenant. Naval History and Heritage Command photograph, NH 76791. 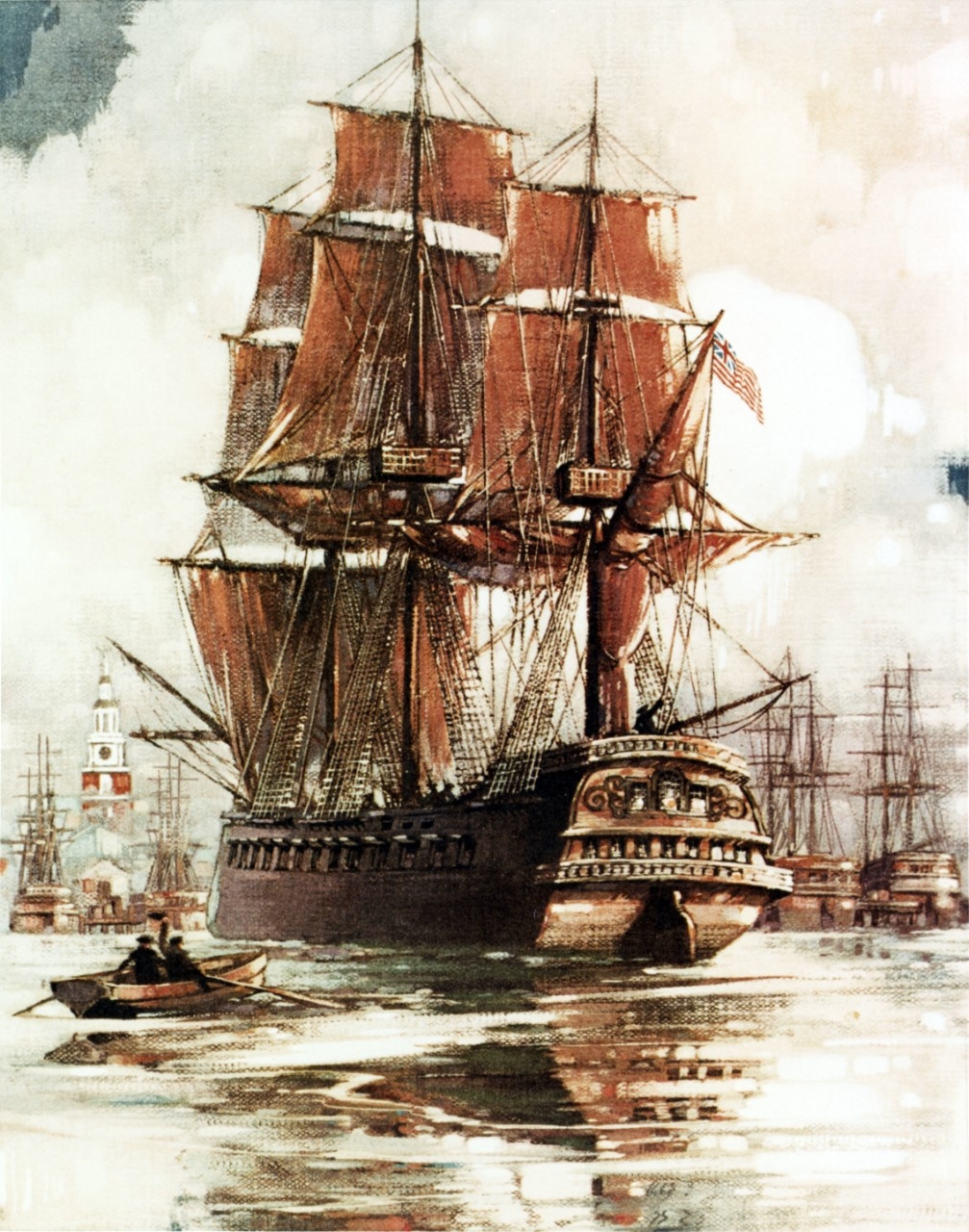 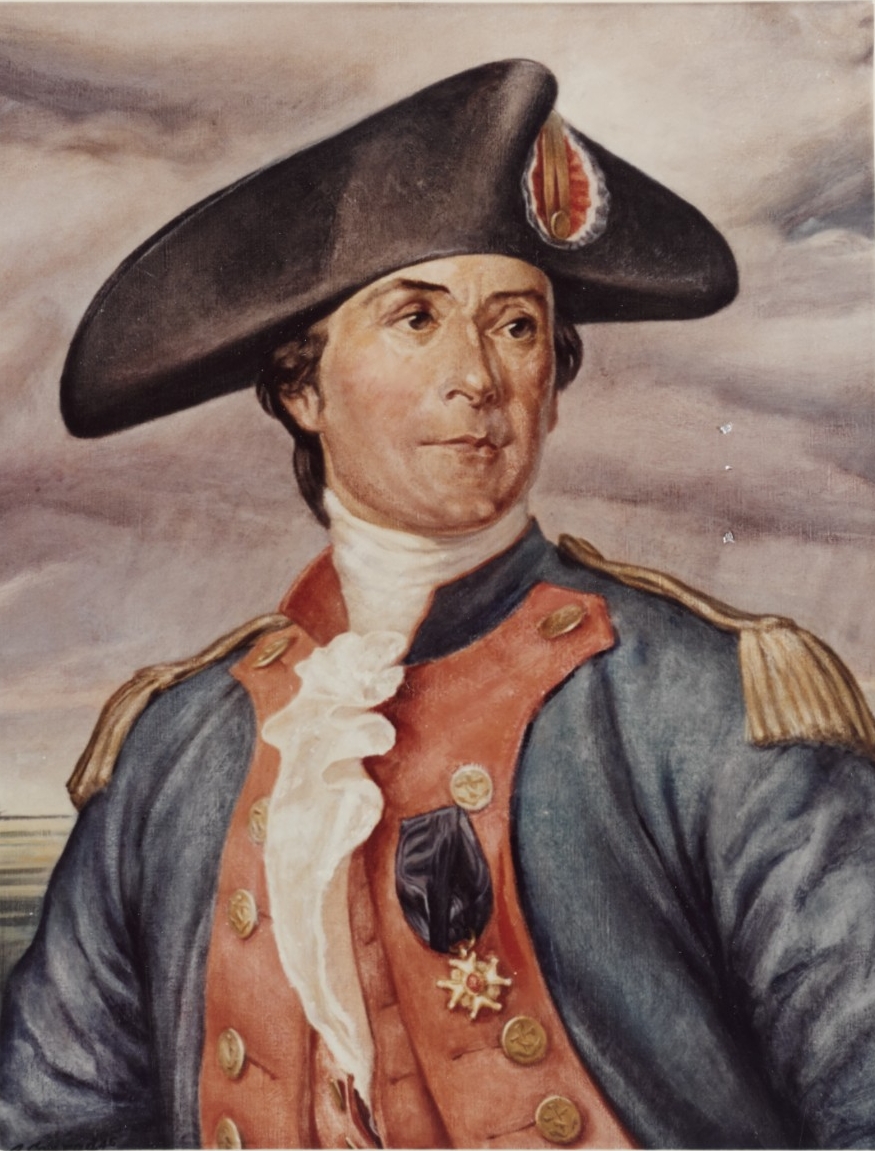 Painting by A. S. Conrad of Captain John Paul Jones. Jones’ served as a lieutenant onboard Continental Navy ship Alfred after she was commissioned in Philadelphia, 3 December 1775. He later took command of the ship in 1776. Naval History and Heritage Command photograph, NH 50112-KN. 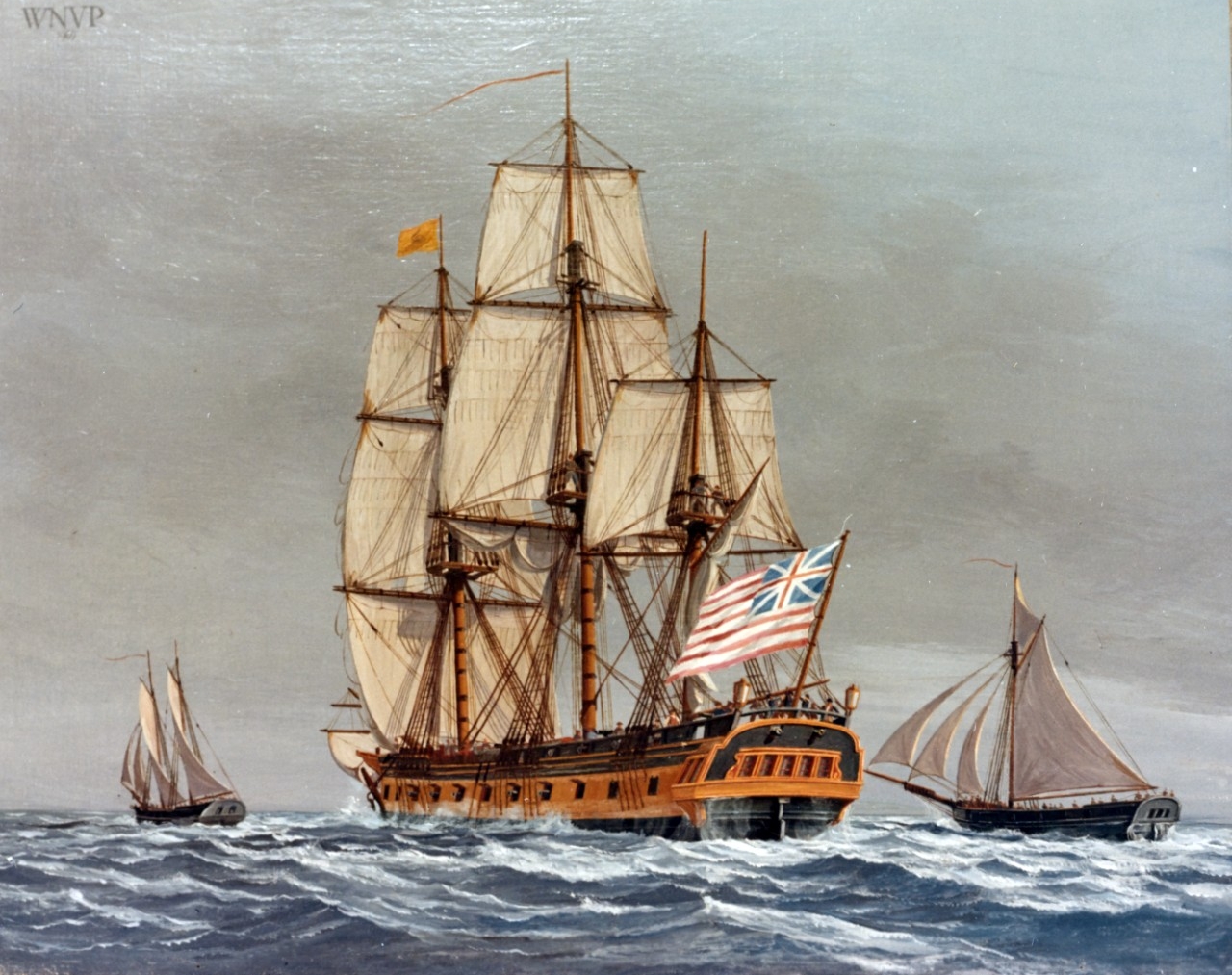 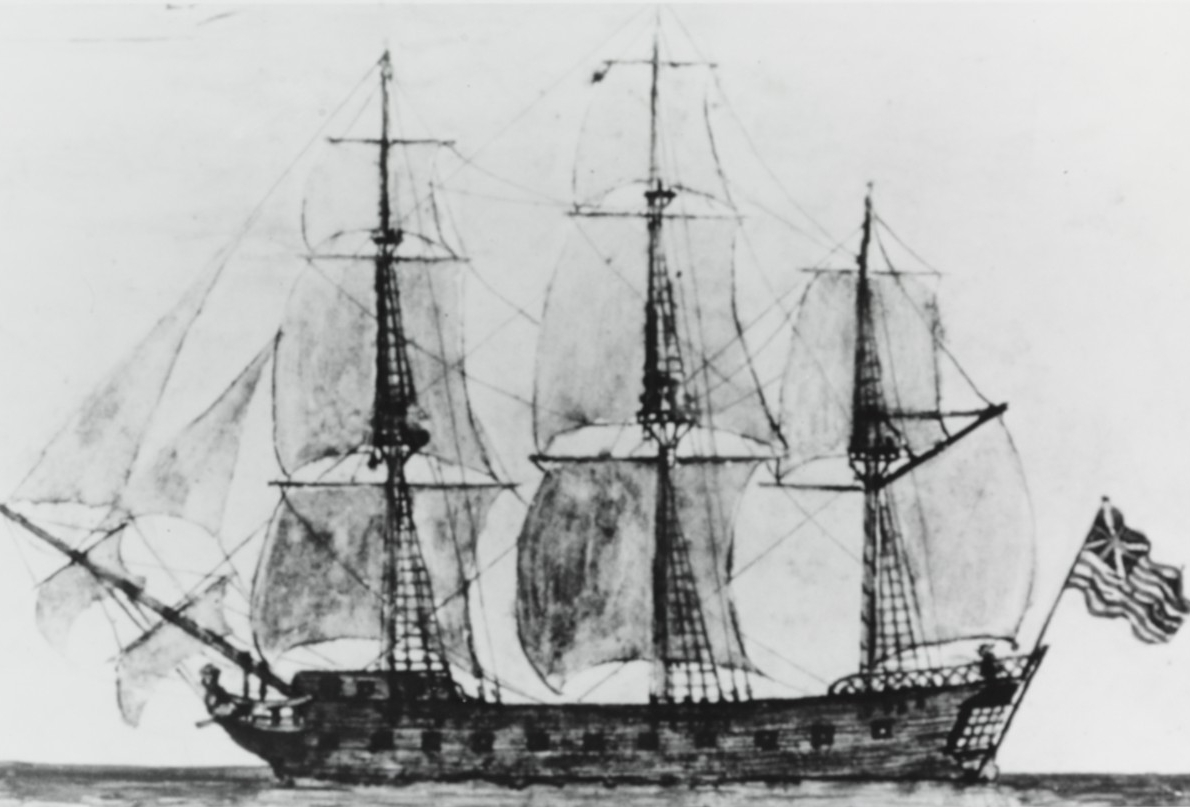 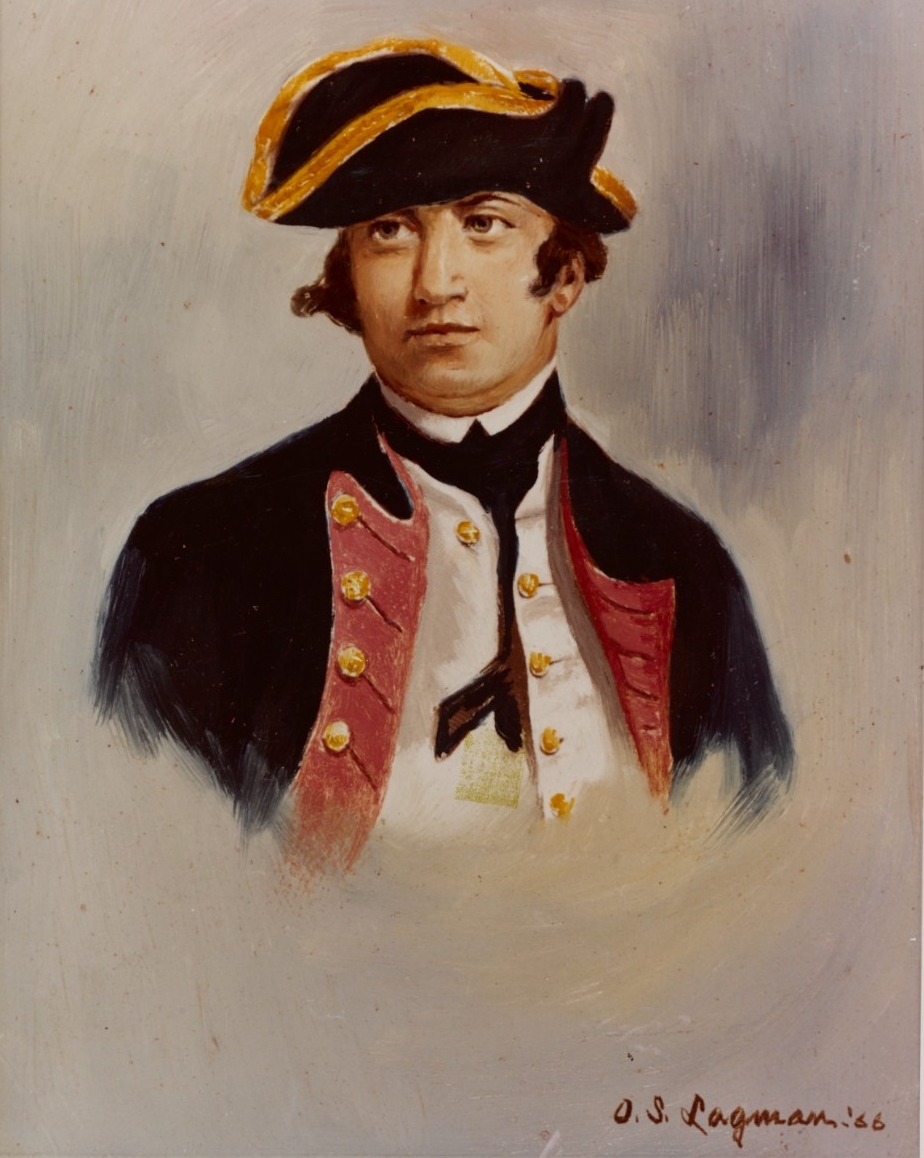 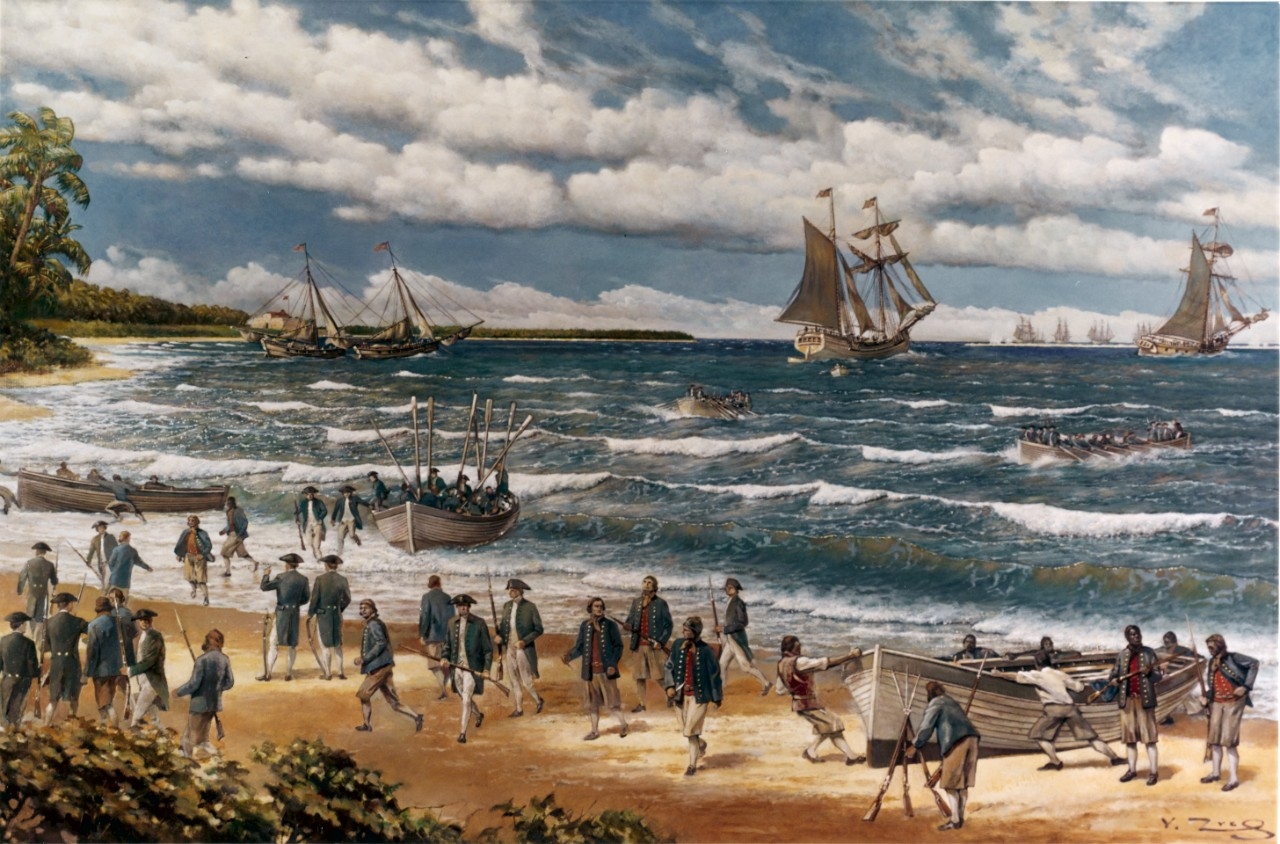 Oil painting on canvas by V. Zveg, 1973, depicting Continental Sailors and Marines landing on New Providence Island, Bahamas, 3 March 1776. Their initial objective, Fort Montague, is in the left distance. Close off shore are the small vessels used to transport the landing force. They are (from left to right): two captured sloops, schooner Wasp and sloop Providence. The other ships of the American squadron, to include Alfred, are visible in the distance. The operation was commanded by Commodore Esek Hopkins. Naval History and Heritage Command photograph, NH 79419-KN. 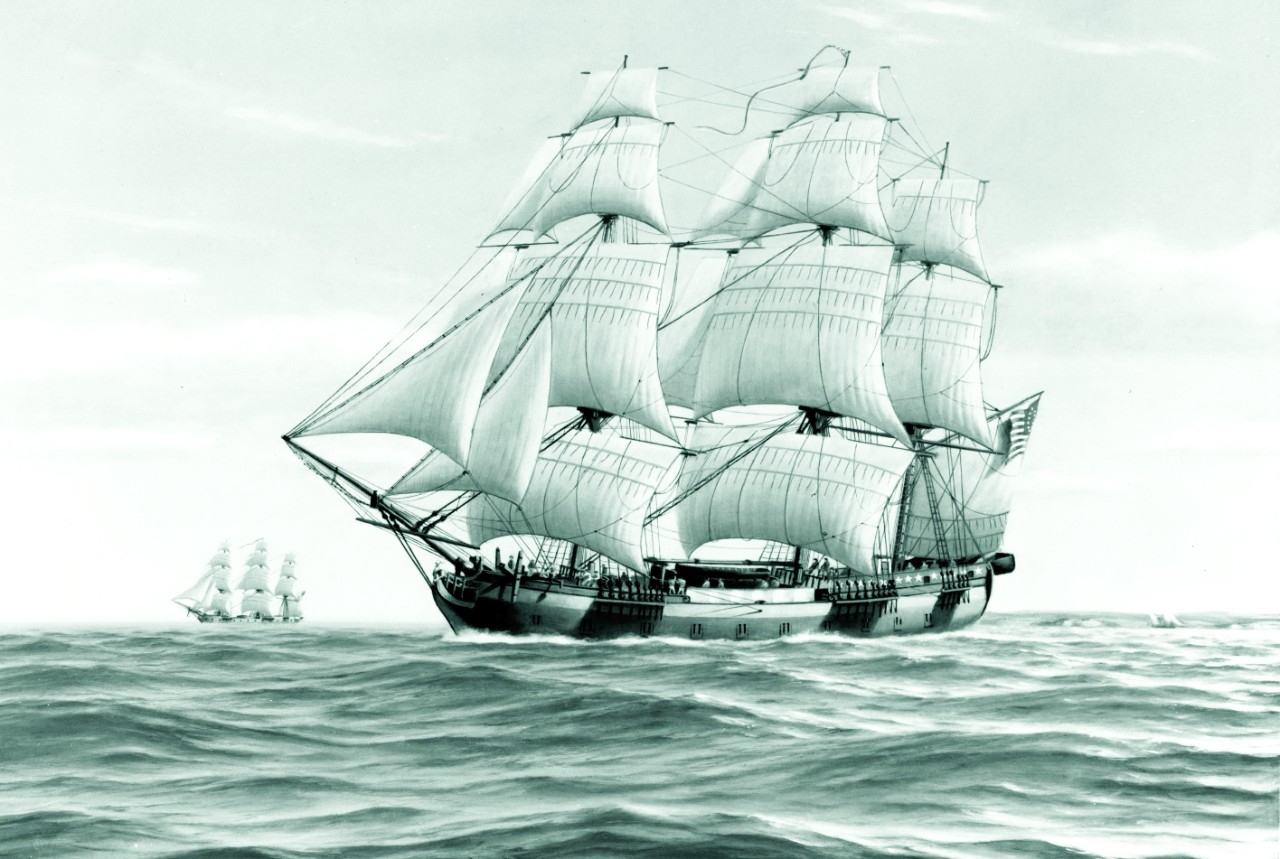 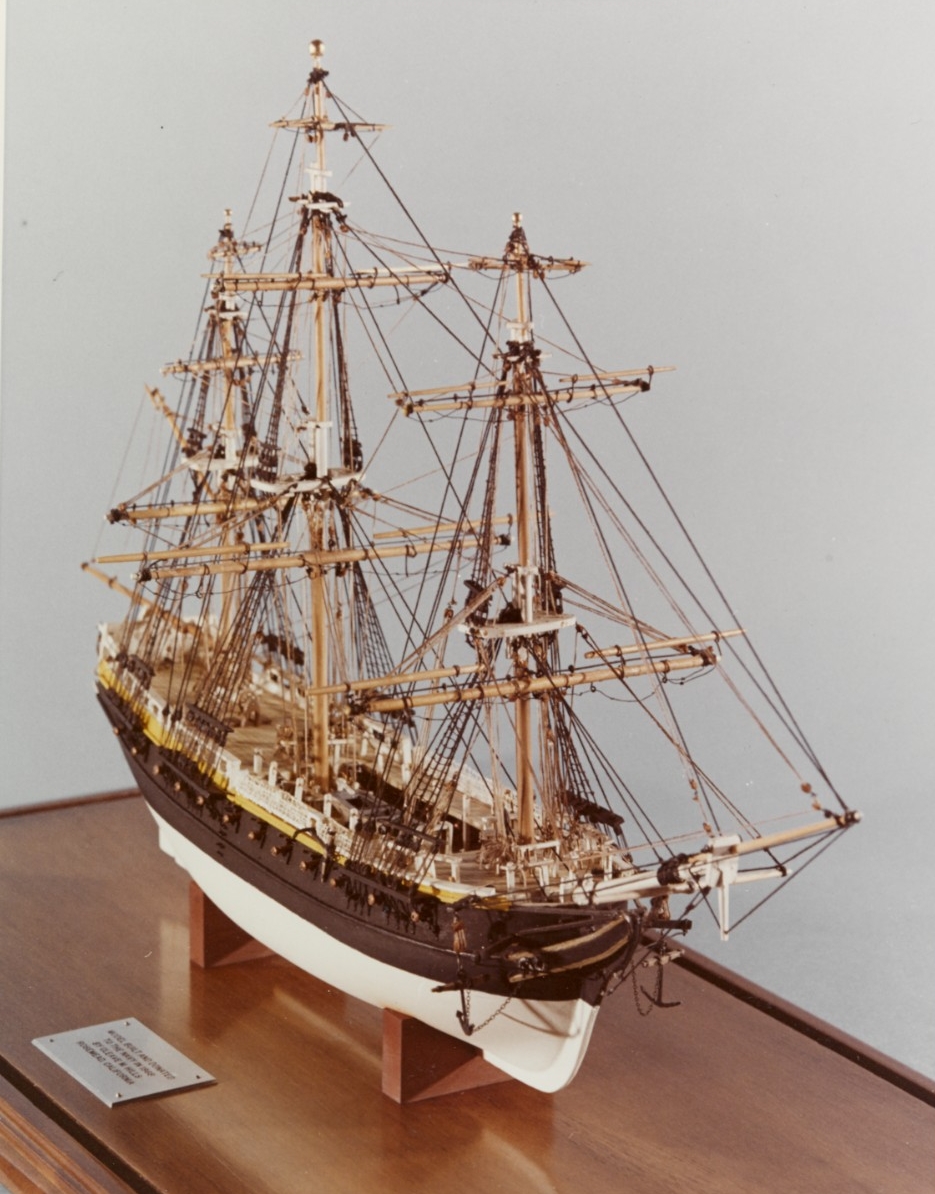 Alfred was one of the first ships of the Continental Navy and one of John Paul Jones' early commands. Cleave M. Hills was the model maker. It was donated to the U.S. Navy in 1968. This model can be found in the American Revolution and French Alliance section at the National Museum of the U.S. Navy in Washington, DC. Naval History and Heritage Command photograph, NH 84099-KN.