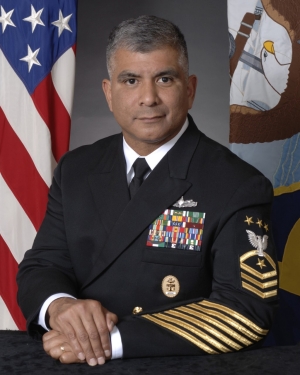 Master Chief Joe R. Campa Jr. was born and raised in California and enlisted in the Navy on 2 June 1980. He completed Recruit Training and Hospital Corps “A” School in San Diego, California.

Command Master Chief Campa is a distinguished honor graduate of the U.S. Navy Senior Enlisted Academy (class 88). He also graduated from the U.S. Army Sergeants Major Academy in May 2003 and completed the Command Sergeants Major course. He holds a Bachelor of Science Degree from Excelsior College. In March 2006 he graduated from the Naval War College with a Master of Arts degree in National Security and Strategic Studies.