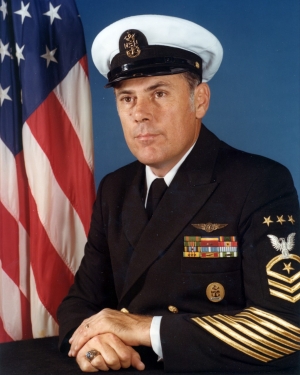 Master Chief Thomas S. Crow was born in Ohio and graduated from McArthur High School in 1952.

After completion of recruit training, Master Chief Crow attended AN “P” School and AM “A” School at NATTC, Memphis, Tennessee. His first tour was an Airframe Structural Mechanic, Transport Air Crew member, VR-21, Barbers Point, Hawaii. He became a Search and Rescue Helo Crew member, NAS Chincoteague, Virginia. In 1958, he attended AM “B” School at NATTC, Memphis, Tennessee, and was advanced to AMH2.

Master Chief Crow served as Aircrew A3D, VAH 9, Sanford, Florida, and deployed aboard USS Saratoga. This tour was followed with a tour as an instructor at AM “B” school, Memphis, Tennessee. He reported to VF-121, NAS Miramar, California, in September 1966. During this tour, he deployed aboard USS Coral Sea, and served in country in DaNang and Chu Lai, Vietnam.

In August 1969 Master Chief Crow reported to Naval Air Station North Island, California. During this tour he was advanced to Chief Petty Officer. His tour included a four month TAD to VRC-50 in support of CIA, COD, aircraft maintenance. After his return to North Island, he was advanced to Senior Chief and was awarded the Navy Achievement Medal for performance as Maintenance CPO.

Master Chief Crow attended Navy Drug/Alcohol Counselor School, NAS Miramar and served in the Human Resource Management Office in February 1977. In December 1977 he was selected to serve as Master Chief of the Force, Senior Enlisted Advisor to Commander Naval Air Force Pacific. During this tour he earned his bachelor of business administration at National University, San Diego, California.

In June 1979 Master Chief Crow was selected by the Chief of Naval Operations to serve as the fourth Master Chief Petty Officer of the Navy. He was sworn into the position on September 28, 1979.

Master Chief Crow retired from active duty on November 1, 1982. He remains an active advocate of the Navy as a Co-chairman of the Secretary of the Navy Retired Affairs from 1983-86, honorary board chairman, U.S. Navy Memorial Foundation, Navy League of the United States, Fleet Reserve Association, a member on the board of advisors to San Diego Armed Services YMCA, and president of the United Armed Forces Association.

Read more about MCPON Crow in excerpt from Winds of Change: The History of the Office of the Master Chief Petty Officer of the Navy, 1967–1992.