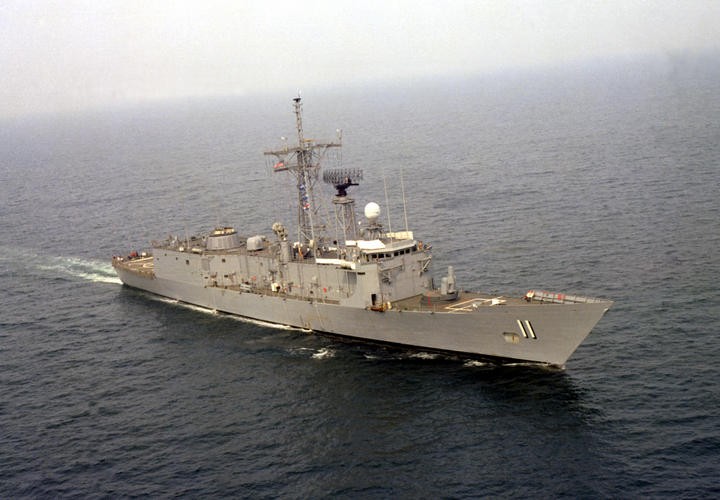 Joseph James “Jocko” Clark was born on 12 November 1893, to William A. and Lillie Berry Clark. He was the first Native American graduate of the U.S. Naval Academy. Of Cherokee ancestry, Clark served during both world wars and the Korean War. During World War II, Rear Adm. Clark caught the attention of Adm. Marc A. Mitscher, Commander, Fast Carrier Task Force (TF 58), with his aggressive leadership while serving as commanding officer of the aircraft carriers Yorktown (CV-10) and Hornet (CV-12). Unimpressed with the performance of one of the task group commanders of TF 58, Adm. Mitscher ordered Clark to take over. Adm. Clark later commanded the Fast Carrier Task Force (TF 77) during the Korean War, receiving a promotion to vice admiral, before commanding the Seventh Fleet. Clark retired from the Navy with the rank of admiral on 1 December 1953. Adm. Clark received several awards throughout his naval career, including the Navy Cross, Distinguished Service Medal (x2), Silver Star, and the Legion of Merit. He died on 13 July 1971, in St. Albans, N.Y.

Joining the U.S. Atlantic Fleet as a ship of Cruiser Destroyer Group (CruDesGru) 12 and Destroyer Squadron (DesRon) 8, Clark steamed from Bath, on 23 June 1980, for Mayport, Fla. She arrived at her new homeport on 1 July 1980. The first missile that Clark ever fired, during a missile exercise in the Caribbean, resulted in a direct hit.

After returning to Bath for a three month post-shakedown availability (9 January–9 April 1981), Clark began Weapon Systems Accuracy Trials at Puerto Rico and St. Croix. Upon completion on 28 April, she participated in Ocean Venture, an anti-submarine training exercise, firing her first two torpedoes. In October, Clark missed her first major fleet exercise (Readex 1-82) due to casualties to two of her four diesel generators. 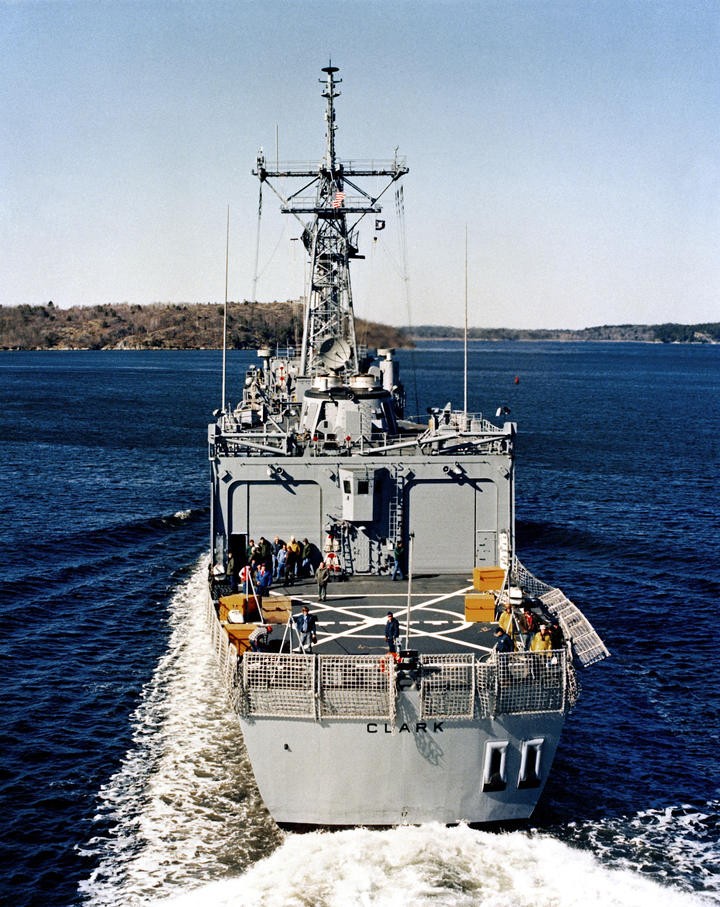 Clark departed Mayport en route the Mediterranean on her maiden cruise on 27 January 1982. During the deployment, the guided missile frigate sailed underway 113 days of the 168 days away from her homeport. Clark participated in Phiblex 82 and Sardinia 82 in February, providing escort and simulated naval gunfire support for the amphibious task group and to the supporting aircraft carrier, Dwight D. Eisenhower (CVN-69). After a port visit to Monaco in late June, Clark escorted amphibious transport dock Nashville (LPD-13) and dock landing ship Hermitage (LSD-34) as they evacuated Americans from Lebanon. In July, off the coast of Spain, the guided missile frigate rescued three sailors from John F. Kennedy (CV-67) who were washed overboard. A fourth missing sailor was never found.

Deploying for the Mediterranean on 20 October 1983, Clark relieved destroyer Arthur W. Radford (DD-968) at Tangiers, Morocco. Transiting the Strait of Gibraltar on 31 October, she joined elements of the Spanish Navy for NATO exercise Crisex 83. Steaming to Gaeta, Italy, Clark remained in port for three weeks while conducting an Intermediate Maintenance Availability. Clark patrolled with other Sixth Fleet vessels in the Eastern Mediterranean for the rest of the year, receiving the Navy Expeditionary Medal for operations in the Cyprus-Syria Gap (10–30 December).

Departing her Eastern Mediterranean station on 21 January 1984, Clark arrived in Izmir, Turkey, for a well-deserved port visit after 53 straight days at sea, a ship record (23 January). Passing through the Suez Canal, she joined Gallery (FFG-26) as part of the Middle East Force and arrived in the Red Sea. She arrived in the Persian Gulf on 10 February and conducted a turnover with frigate Whipple (FF-1062). After a port visit to Karachi, Pakistan, Clark returned to the Persian Gulf (23 February). Departing the Persian Gulf on 5 April, the warship began her homeward transit, arriving to Mayport on 6 May. After a short upkeep period, Clark began counter narcotics operations with the Coast Guard in the Caribbean (13 November–20 December).

Steaming up the St. John’s River to dry dock for SRA-II, the frigate completed repairs and modernization of her hull and superstructure, an installation of the fin stabilizer system, and repair of her cracked superstructure (8 April–21 August 1985). She sortied from Mayport on 31 August to avoid the effects of the approaching Hurricane Elena. On 17 September, Clark departed Mayport for her new homeport at Philadelphia. She also earned a Meritorious Unit Commendation for her previous deployment to the Persian Gulf the year prior.

Clark conducted a series of training events throughout 1986, beginning with Surface Warfare Training Week in April. She then held Naval Reservist Training (NRT) from 18–20 April. ASW training began in May, followed by an Active Duty for Training period on 17 July. On 19–20 October, Clark arrived at Roosevelt Roads to begin Castex exercises, enabling her to complete 23 training scenarios with superior grades.

Steaming to the Virginia capes, Clark conducted gunnery and training exercises to begin the New Year (4–6 January 1987). She later commenced SRA III (3 September 1987–8 January 1988). During port visits to Portsmouth, N.H., and Penns Landing, Pa., approximately 8,000 civilians received a tour of the vessel (16–21 May). On 27 June, Clark answered a distress flare from Honduran freighter Etoille De Bethelem, and took the vessel in tow to Guantánamo Bay, Cuba. After getting underway for Mayport, the guided missile frigate commenced Surface Warfare Training Week (15–19 August). Clark stood down the channel for a command inspection before assisting with sea trials for the pre-commissioning unit of guided missile cruiser Philippine Sea (CG-58) (9–15 November).

Clark continued various training exercises in the Atlantic, including an ASW exercise with submarine Augusta (SSN-710) and Oliver Hazard Perry (FFG-7) off the Jacksonville Operating Area (14–15 March 1989). On 7 April, Clark fire teams put out a Class Bravo fire that broke out in her 1A gas turbine engine. Proceeding to Mayport for repairs, she got underway again after a successful operational test of the engine. Clark then steamed north to New York City to participate in Fleet Week 89. 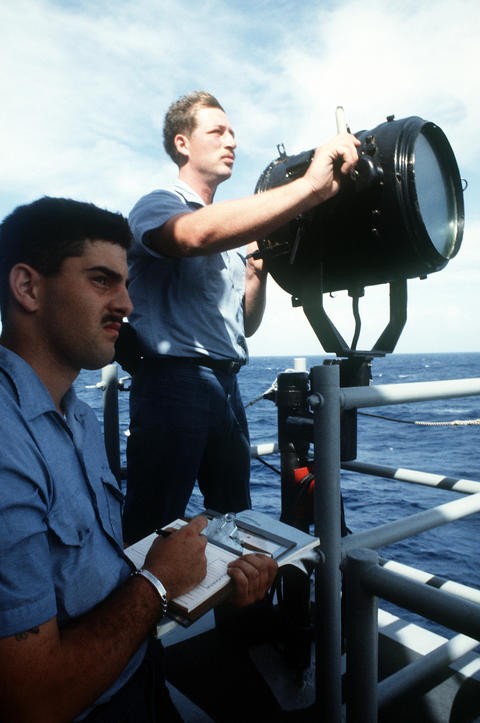 Sailors on the guided missile frigate USS Clark (FFG-11) man a signal lantern and note pad as they prepared to send a message and record the response. Under Coast Guard command, Clark and a Naval Air Reserve helicopter detachment were on a drug-smuggling interdiction patrol, 01 February 1990. VIRIN: DN-ST-90-05636.

Returning to sea for counter narcotics operations with the Coast Guard from Mayport, Clark began patrolling the Caribbean with fast combat support ship Detroit (AOE-4), Thomas S. Gates (CG-51), and Coast Guard cutter Seneca (WMEC-906) (17 January–26 February 1990). During NRT weekend, failures occurred to both gas turbine engines for different reasons. For six hours, Clark had only auxiliary propulsion available, until repairs by her crew enabled her to return to Philadelphia under her own power (7–9 March). The frigate began a ten-month dry dock period at the General Ship Corp., in Boston, Mass. (23 May–3 October). A strike by union workers caused delays when the shipyard closed (24 August–21 September).

A missile magazine room flooded with four feet of fresh water on 17 January 1991, causing further delays for Clark to resume underway training. Finally getting underway for sea trials, the guided missile frigate could not perform certain tests due to heavy weather, and returned to General Ship Corp. (17–20 April). Her training woes continued during an anti-aircraft training exercise, when the infrared target failed to operate correctly on two separate occasions, forcing Clark to return to Mayport (8–9 August).

Getting underway for Roosevelt Roads on 28 January 1992, Clark participated in Fleetex (2–8 February). In May, she steamed for the Caribbean to conduct counter narcotics operations with the Coast Guard. At the end of her assignment in the Caribbean, Clark returned to her homeport at Philadelphia for the last time. She made way for her new homeport at Newport, R.I., on 7 July. Steaming to the North Atlantic, the guided missile frigate participated in Canadian Fleet Operations (19–25 October), before making a port visit to Halifax, Nova Scotia. Clark then proceeded to conduct exercises off Roosevelt Roads (19–28 November) before returning to Newport for a holiday leave period.

Steaming into the Caribbean to conduct counter narcotics operations (1–17 June 1993), Clark transited the Panama Canal into the Pacific on 3 June. Crossing the Equator on the 8th, her pollywogs were initiated into King Neptune’s Court to become shellbacks. Clark arrived back at Newport to begin a six-month upkeep period in the shipyard (31 August 1993–7 February 1994). After sea trials, she conducted a Passex with the Brazilian Navy off Puerto Rico (11–14 March). Clark again shifted her homeport, this time to Norfolk (16 April). After making way en route to Haiti, she participated in Operations Support Democracy and Able Manner (24 June–18 July). 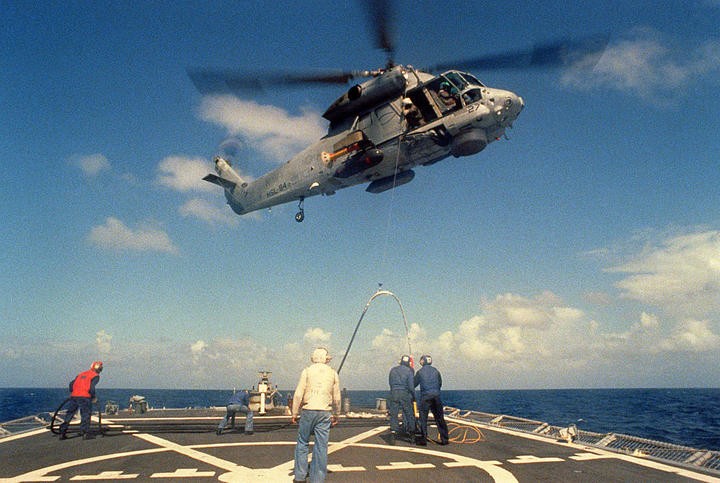 Clark conducted a tow escort exercise with Gonzales (DDG-66) on 7 April 1998, in preparation for a Towex. She began tow escort duties for ex-Mississippi (CGN-40) and ex-Groton (SSN-694) a week later, en route to the Panama Canal. Getting underway on 27 July, Clark embarked with Coast Guard Squadron 42 for counter narcotics operations in the Caribbean. The ship conducted a total of 13 at-sea boarding’s of suspect vessels before returning to Norfolk on 9 November.

After commencing a six-week restricted availability in Norfolk through January–February 1999, Clark began preparing for a tow escort mission and Great Lakes cruise. Departing for tow escort operations on 9 April, en route to the Panama Canal, the frigate detached from formation two weeks later before steaming for and conducting exercises off Puerto Rico. Getting underway for her Great Lakes cruise on 9 June, Clark made port visits at Boston (10–16 June); Portland, Maine (16–18 June); Quebec City, Quebec (22–23 June); Montreal (23–26 June); Ogdensburg, N.Y. (26–27 June); and Cleveland, Ohio (29 June–5 July). She made several port visits at cities along Lake Ontario, Lake Erie, and Lake Superior before turning about and steaming back down from Buffalo, N.Y. (23–25 August); Montreal (31 August–2 September); and Philadelphia (10–17 September) before returning to Norfolk on the 18th. Later estimates state that over 110,000 people visited Clark during her seventeen port visits, breaking the previous Great Lakes Cruise attendance record.

Turnover of Clark to the Polish Navy began in earnest on 6 January 2000. The veteran frigate stood out to sea for one day (19 January) for a training familiarization. In February, she conducted three separate three-day underway training periods, allowing the Polish crew more hands-on control of operations on board while she was underway.

Turned over to Poland, Clark was renamed General Kazimierz Pulaski (272), after Polish nobleman Kazimierz Pulaski, a cavalryman who fought for the Continental Army during the American Revolutionary War and was killed during the siege of Savannah, Ga., on 11 October 1779.