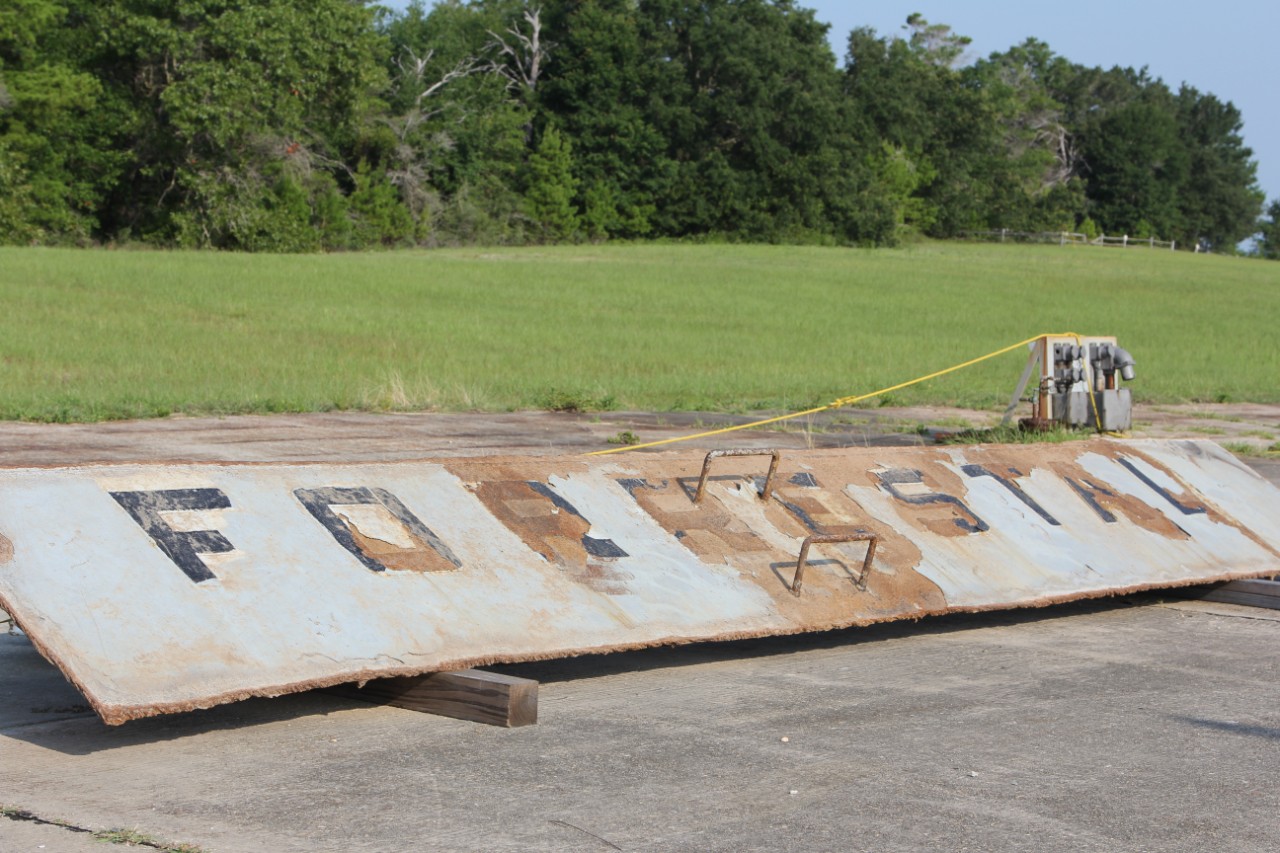 Caption: The stern plate, which has been part of the ship since her commissioning in 1955. It arrived in Pensacola just days before the 48th anniversary.

PENSACOLA, Fla. -- The two naval aviators were on hand Tuesday at the National Naval Aviation Museum (NNAM) at Naval Air Station (NAS) Pensacola to examine a section of their historic ship that was recently added to the museum’s collection.  The USS Forrestal (CVA 59) suffered a devastating fire and resulting explosions resulting from a rocket accident on 29 July 1967 which killed 134 Sailors and injured 161.

“Since the decision to scrap Forrestal (CV 59), the museum has sought to obtain this stern plate,” said Robert Macon, the museum’s acting director . “Every single aircraft that landed on the ship passed over it and to have a section of the ship that was the foundation for the modern supercarriers of today on display will be of great interest to our visitors.”

Workers at All Star Metals in Brownsville, Texas, where the ship arrived for scrapping in February 2014, cut away the stern plate, which has been part of the ship since her commissioning in 1955.  It arrived in Pensacola just days before the 48th anniversary. 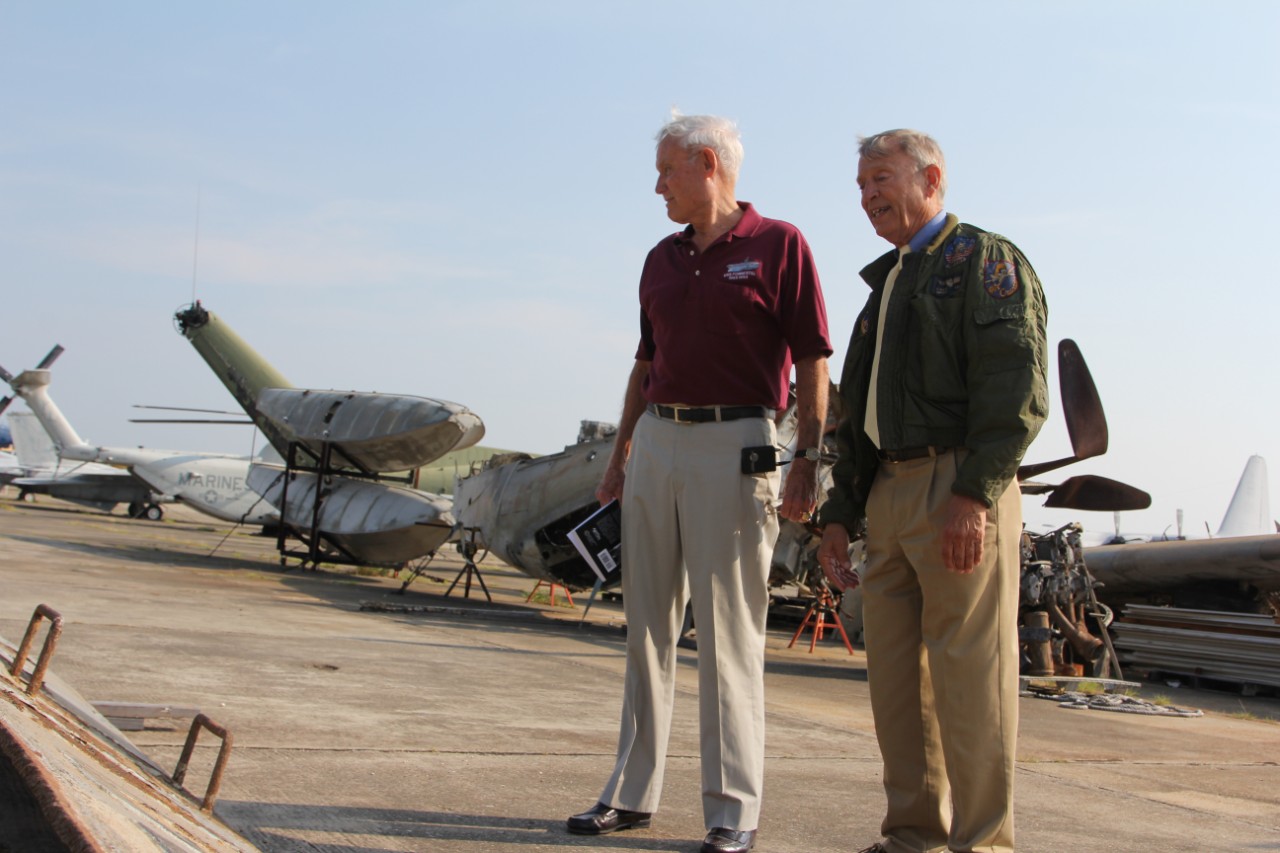 Caption: Retired naval aviators Rear Adm. Peter Booth and Capt. C. Flack Logan were fighter pilots serving on board the aircraft carrier that day which was operating off the coast of Vietnam when catastrophe struck.

Retired naval aviators Rear Adm. Peter Booth and Capt. C. Flack Logan were fighter pilots serving on board the aircraft carrier that day which was operating off the coast of Vietnam when catastrophe struck.  A Zuni rocket loaded on one aircraft impacted an external fuel tank of another airplane, starting a fire on the flight deck that caused bombs on fully-loaded aircraft spotted for launch to detonate.

Observing what was happening around him from the cockpit of his F-4 Phantom II, positioned along the starboard edge of the flight deck aft of the ship’s island, Logan climbed out and jumped onto the flight deck.  Running forward, he was caught in the explosion of a 1,000 lb. bomb, the force throwing him against the island.  From his squadron’s ready room below decks, Booth made his way to the catwalk and beheld the inferno.

“My heart was beating and tears welled up for this could not be happening to us,” he later wrote.

“During that first few minutes, many proud and dedicated sailors died with more to follow in the hours to come.”   In addition to the significant crew casualties, the fire destroyed 21 airplanes and the ship’s survivability was in doubt during the mass casualty.

In addition to Booth, who later in his career commanded the carrier, and Logan, the survivors included among others future Senator John S. McCain III, and future (and now retired) Commander Pacific Fleet Admiral Ron Zlatoper .

For more information about the tragedy – and how the Navy learned from it – see http://usnhistory.navylive.dodlive.mil/?p=32369 .  The page includes video from the accident itself.

“The heroic actions of the crew that fateful day embodied the honor, courage, and commitment that are a hallmark of Navy personnel,” commented museum historian Hill Goodspeed.  “The fact that the lessons of the Forrestal fire are still used in Navy training translates into the fact that most every sailor is familiar with this ship.”

After undergoing preservation by museum staff, the stern plate, which stretches 18 ft. in length and weighs upwards of 2,500 lb., will be placed on public display, where it will join that of the carrier USS Oriskany CV 34).  The stern plate of that ship was removed before her 2006 sinking as an artificial reef off Pensacola.

The Navy’s maiden supercarrier and the first aircraft carrier named for a naval aviator—James V. Forrestal received his wings in World War I and later served as the first Secretary of Defense—Forrestal served for 38 years, most of her deployments in the Atlantic Ocean and Mediterranean Sea, the exception coming in the summer of 1967, when she steamed to the Western Pacific and suffered the deadly fire off Vietnam.