Francis Asbury Roe -- born in Elmira, N.Y., on 4 October 1823 -- entered naval service as a midshipman on 19 October 1841 and graduated from the U.S. Naval Academy in 1848. He then left the Navy for eleven months (June 1848-May 1849) while serving on board the mail steamer Georgia of the New York & West India Line. With his return to the Navy, Roe received assignment to the brigantine Porpoise on the Asiatic Station. The ship served in an expedition to chart the northern Pacific, and Cape Roe on Tanegashima Island (Japan) was named in his honor. Later, he participated in an engagement with thirteen Chinese armed junks off Macau, in which six were sunk and the rest scattered. Roe received his commission as master on 8 August 1855 and was, shortly thereafter, promoted to lieutenant on 14 September. He then served on detached duty with the Coast Survey (1857-1858).

During the Civil War, in April 1862, he was executive officer on board the screw steamer Pensacola in Capt. David G. Farragut’s squadron. As a result of the commanding officer’s illness, Roe assumed command and earned a recommendation for promotion for gallantry for his actions as that ship led the starboard column past the Confederate Forts Jackson and St. Philip. Promoted to lieutenant commander on 16 July 1862 and ordered to command the gunboat Katahdin in operations on the Mississippi River, he defeated General John C. Breckinridge’s attack on Baton Rouge, La. and assisted in the destruction of the ironclad ram CSS Arkansas on 7 August 1862.

After commanding Katahdin, Roe was ordered to command the side-wheel steamer Sassacus of the North Atlantic Blockading Squadron in September 1863. During this duty his ship captured and destroyed several blockade runners in the North Carolina sounds. Roe was again commended for gallantry for his actions on 5 May 1864, where Sassacus cooperated in the engagement of the Confederate ironclad ram Albemarle and the gunboat Bombshell. During this action, Roe’s ship rammed the ironclad. The Confederates fired a 100-pounder rifle shell that slammed into the Federal ship and exploded in the boiler. Despite this damage and the scalding of crew members by the escaping steam, Roe skillfully handled his ship and compelled Bombshell to strike her colors. Subsequently, he transferred to command of the steamer Michigan on the Great Lakes and served in that capacity into 1866. During that year, he merited promotion to commander on 25 July. 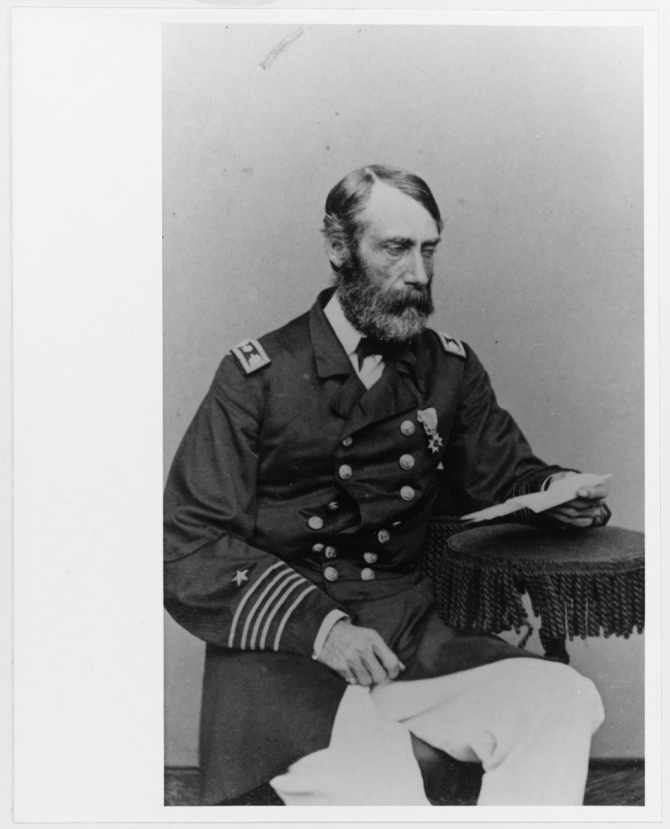 Roe, promoted to commander on 25 July 1866, assumed command of the gunboat Tacony on a special mission to Mexico as part of the Gulf Squadron. His firmness as senior officer prevented a bombardment of Veracruz. On 3 August 1867, he was detached and, in recognition of his services, was made Fleet Captain of the Asiatic Station, where he served until December 1871. Four months later, he was commissioned captain on 1 April 1872, and subsequently attached to the Boston Navy Yard (1872-1873). His last cruise was in command of the screw sloop of war Lancaster, the flagship on the Brazil station (1873-1875). His later assignments included being attached to the naval station at New London (1875-76) and on special duty in Washington, D.C. (1879-1880). He was promoted to commodore on 26 November 1880 and was later appointed governor of the Naval Asylum at Philadelphia (1883-1884). Having been commissioned rear admiral on 3 November 1884, Roe was ultimately transferred to the retired list on 4 October 1885.

Roe died in Washington, D.C., on 28 December 1901 and is interred at Arlington [Va.] National Cemetery. 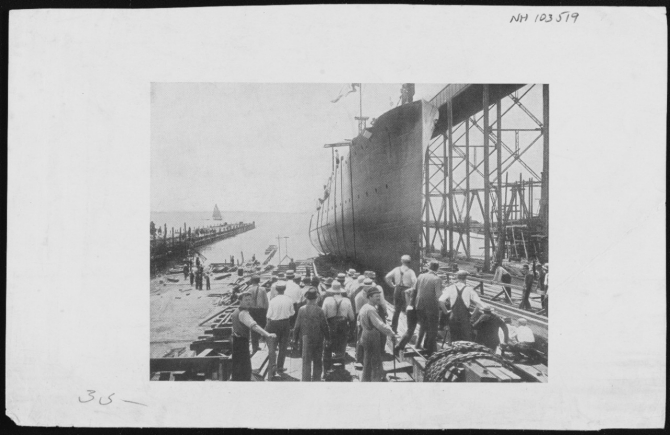 Roe sliding down the ways during her launching, 24 July 1909. (The original print is a halftone reproduction. Collection of the Society of Sponsors of the United States Navy; Naval History and Heritage Command Photograph NH 103519) 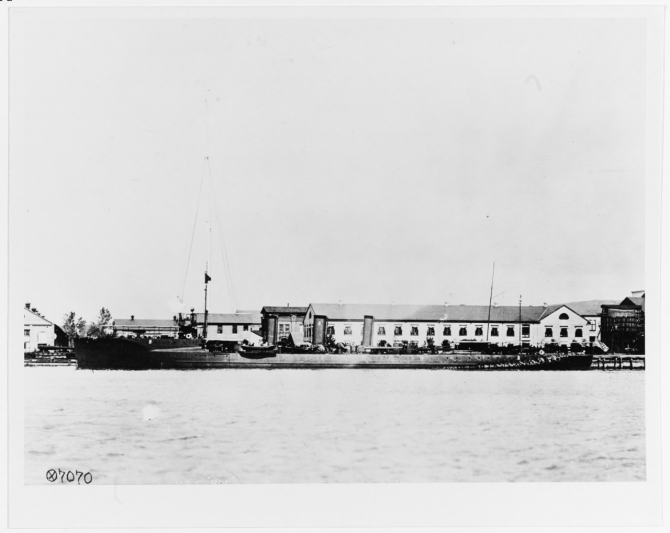 Following commissioning, Roe was attached to the Torpedo Flotilla, Atlantic Fleet, and conducted exercises in the Norfolk area until December 1910 with one interruption, a voyage to Newport, R.I., and back in early November. On 17 December, she got underway for Key West, Fla., and winter exercises in the Gulf of Mexico. With the spring, she returned to Norfolk and until January 1913 remained active off the mid-Atlantic and southern New England sea coasts. From January to April 1913, she participated in maneuvers in the Caribbean, then, into the fall, operated off New England. On 30 October, she arrived at Philadelphia where she was placed in reserve on 3 November.

In March 1914, she was assigned to the newly organized Reserve Torpedo Flotilla, Atlantic Fleet and until the World War rotated between reserve and active duty with the Atlantic Fleet. During the late summer and fall of 1914, she operated off the mid-Atlantic seaboard and from February to April 1915 again participated in winter maneuvers in the Caribbean. During the summer of 1915, she operated principally off southern New England; and, in November, put into Charleston, S.C. where she was placed in a reduced complement status. 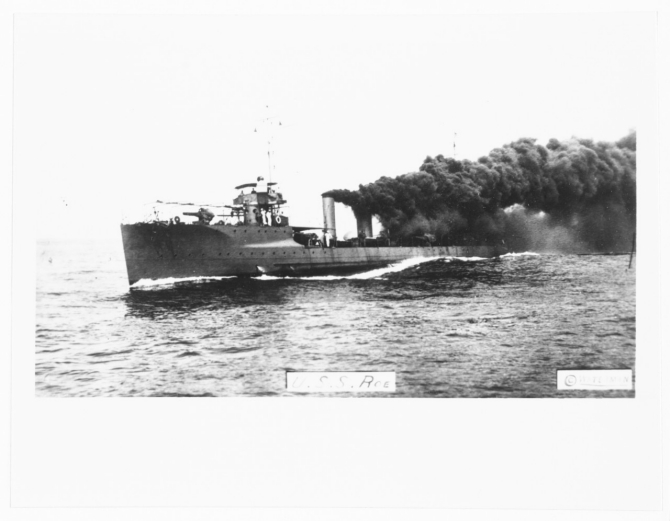 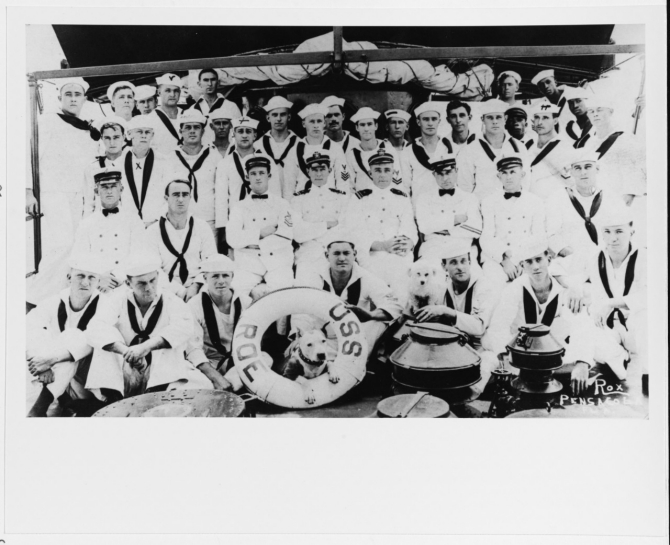 Roe’s officers and crew, circa 1915-1916. The two officers in the center are possibly (from left to right): Lt. (j.g.) Aaron S. Merrill, and Lt. (j.g.) Guy C. Barnes, Roe's commanding officer. The original photograph by Rox, 518 So. Palafox, Pensacola, Fla. was printed on a postal card, which was mailed at Pensacola on 23 September 1916 with the message: “Look natural?” (Naval History and Heritage Command Photograph NH 93718; courtesy of Jack Howland, 1982).

In March 1917, Roe, fully manned, was placed in full commission. With the new month, April, she was assigned to Squadron 2, Division 5, Patrol Force and ordered to assist Treasury and Labor Department officials at Wilmington, N.C. in preventing the destruction or escape of German merchant vessels. On 6 April, as the United States entered World War I, she sent an armed guard on board the German ship, Hohenfelde while she lay at Savannah, Ga.

At mid-month, Roe was transferred to Newport, R.I. whence she conducted anti-submarine patrols and carried out escort assignments between Newport and New York. During this time, on 29 April 1917, she collided with New Jersey (Battleship No. 16) and was towed to the New York Navy Yard for repairs. She was then assigned to patrol and picket duty on the York River. On 9 November, Roe sailed for France, where for the next year she performed coastal patrol and escort duty.

On 8 August 1918, Roe went to the rescue of the U.S. freighter Westward Ho, a 5,814-ton steamer, which had been torpedoed in the Bay of Biscay by U-62 (Kapitänleutnant Ernst Hashagen commanding) while en route from New York to LaPallice, France, in convoy HB-7. The destroyer took on board the 46 members of the sunken ship’s crew. While in formation the next day, 9 August, Roe received a signal of “submarine ahead.” The ship maneuvered until a wake was visible on which she dropped depth charges, but with no discernible results. On 22 October, Roe sighted an oil slick and dropped depth charges, but after further observation, Lt. Cmdr. William A. Hodgman, her commanding officer, decided that there was no submarine in the vicinity. 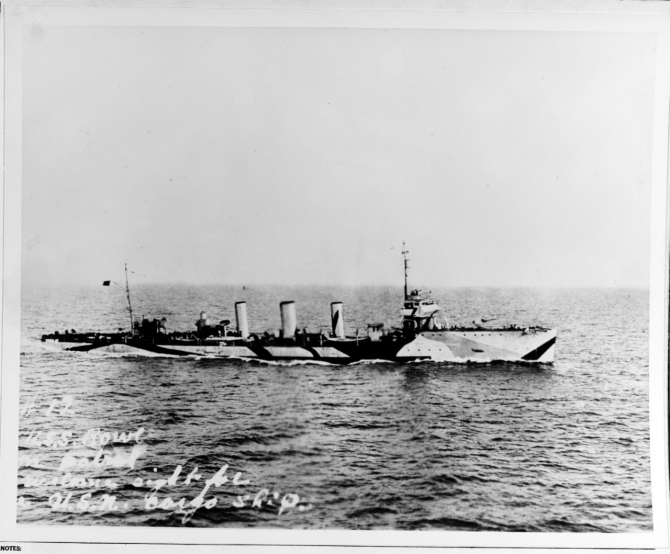 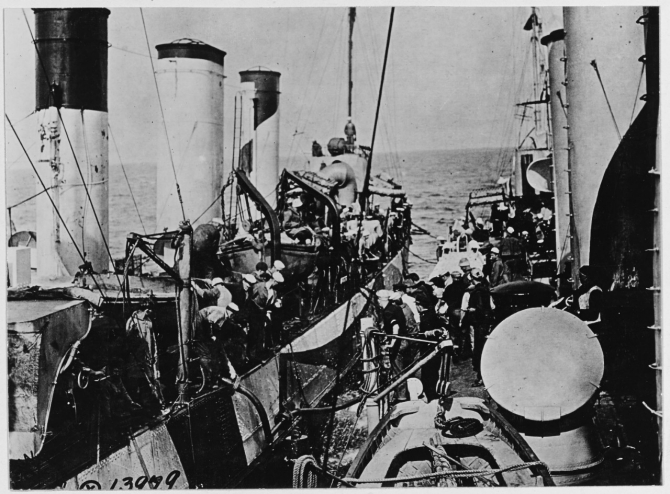 Lt. Cmdr. Hodgman later received the Navy Cross for “distinguished service in the line of his profession … engaged in the important, exacting and hazardous duty of patrolling the waters infested with enemy submarines and mines, in escorting and protecting vitally important convoys of troops and supplies through these waters, and in offensive and defensive action, vigorously and unremittingly prosecuted against all forms of enemy naval activity…”

On 5 November 1918, Roe departed Brest for the U.S. via the Azores and was thus en route home when the World War ended with the Armistice on 11 November. She arrived at New York on 1 December, and at mid-month received orders to the Charleston [S.C.] Navy Yard for general overhaul. After remaining there until July 1919, she then proceeded to Philadelphia, where she was placed out of commission on 1 December 1919 and berthed with the Reserve Fleet at League Island.

Designated DD-24 on 17 July 1920, Roe was reactivated and transferred to the Treasury Department on 7 June 1924 at the Philadelphia Navy Yard for service with the Coast Guard. Roe was one of the 31 destroyers transferred to the Treasury Department to enforce the Volstead Act (Prohibition) and interdict the illegal importation of alcohol. Adapting the vessels to service was thought to be less costly than building new ships. In the end, the rehabilitation of the vessels became a saga in itself because of the exceedingly poor condition of many of the war-weary destroyers. 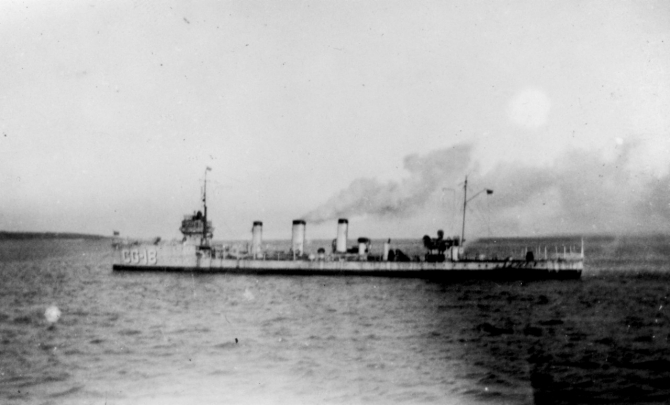 On 30 May 1925, Roe was commissioned as CG-18 at the New York Navy Yard and stationed at Boston, Mass., as a unit of Division Five, Destroyer Force. During the 1928-1929 Gunnery Year, Roe stood 7th of 24 destroyers in the competition. Having stood third in the short-range practice, her overall score was adversely affected by a poor performance in the long-range battle practice which was impacted by poor weather which damaged the targets and precluded the accurate recording of the ship’s shots during the competition.

Roe was placed in a reduced-manning status on 25 October 1929 and the larger part of her crew transferred to Trippe (CG-20). On 1 November 1929, the destroyer, with her reduced complement, arrived at the Coast Guard Depot, Curtis Bay, Md. On 1 February 1930, the Coast Guard ordered the ship’s complement further reduced and on 4 March, the Coast Guard decommissioned her at Curtis Bay. On 12 August, she was ordered to be towed back to Philadelphia Navy Yard which the Coast Guard tug Mascoutin accomplished on 30 August.

Officially returned to the Navy on 18 October 1930, Roe was reinstated on the Navy List in a decommissioned status. She was again berthed at League Island where she remained until sold for scrap in accordance with the terms of the London Treaty on 2 May 1934. Roe was stricken from the Navy list on 28 June 1934.