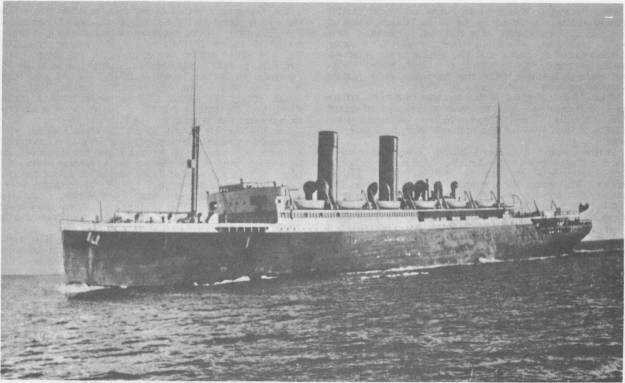 Great Northern (AG-9), was built by William Cramp & Sons in 1915; acquired from her owners, Great Northern Pacific Steamship Co. 19 September 1917 by the USSB; converted to a transport at the Puget Sound Navy Yard; and commissioned there 1 November 1917, Captain W. W. Phelps in command.

Embarking nearly 1,400 passengers at Puget Sound, including 500 "enemy aliens," women and children as well as men, Great Northern sailed for the East Coast 21 January 1918, reaching New York 9 February via the Panama Canal and Charleston. On 7 March she sailed from Hoboken, N.J., for Brest, France, with 1,500 members of the AEF. Great Northern returned to Hoboken 30 March with wounded veterans. From then until August 1919 she made a total of 18 transatlantic voyages, first carrying troops to the fighting zones and then bringing home the victorious "doughboys." Great Northern decommissioned at New York 15 August 1919 and was transferred to the U.S. Army Transportation Service the same day.

While in the USATS, Great Northern was based mainly in the Pacific. In late 1919 and early 1920 she made two long trips from Honolulu to Vladivostok to pick up approximately 3,000 American officers and men returning from the Allies' campaign against the Russian Communists. Great Northern also took a Congressional party on a long Pacific inspection, touching at Hong Kong, Honolulu, Cavite, and then returning to San Francisco, in the summer of 1920.

The transport's varied career took another turn when she was acquired by the Navy from the War Department 3 August 1921. Great Northern recommissioned at Mare Island 11 August 1921, Captain J. K. Taussig commanding, and sailed almost immediately for the East Coast. After disembarking passengers at the Canal Zone, Santo Domingo, Haiti, and Hampton Roads, she put into New York 7 October. Nine days later, 16 October 1921, Admiral Hilary P. Jones, Commander-in-Chief Atlantic Fleet, and his staff reported on board Great Northern to make her the flagship for the Atlantic Fleet.

On 19 November 1921 Great Northern's name was changed by Presidential order to Columbia (q.v.) to honor a name long famous in Navy annals. She remained in New York harbor, functioning as a floating command post, through the rest of 1921. Columbia sailed for the Caribbean to join the annual Atlantic Fleet winter exercises 7 January 1922, reaching Guacanayabo, Cuba, via Charleston and Key West 18 January. Three days later she joined the battleships Wyoming, Arkansas, North Dakota, and Delaware at Guantanamo Bay.

Columbia sailed north 24 February, reaching New York 3 days later. That same day, 27 February 1922, Admiral Jones shifted his flag to Maryland, and Columbia sailed for Chester, Pa. She decommissioned there 4 March 1922 and was transferred to the U.S. Shipping Board. Returning to merchant service, she was renamed H. F. Alexander with Canadian Pacific Lines until 1942, when she was taken over by the War Shipping Administration for use as a troop transport. Renamed George S. Simonds, she served through World War II, was laid up in the Maritime Commission reserve fleet for a time, and then scrapped.