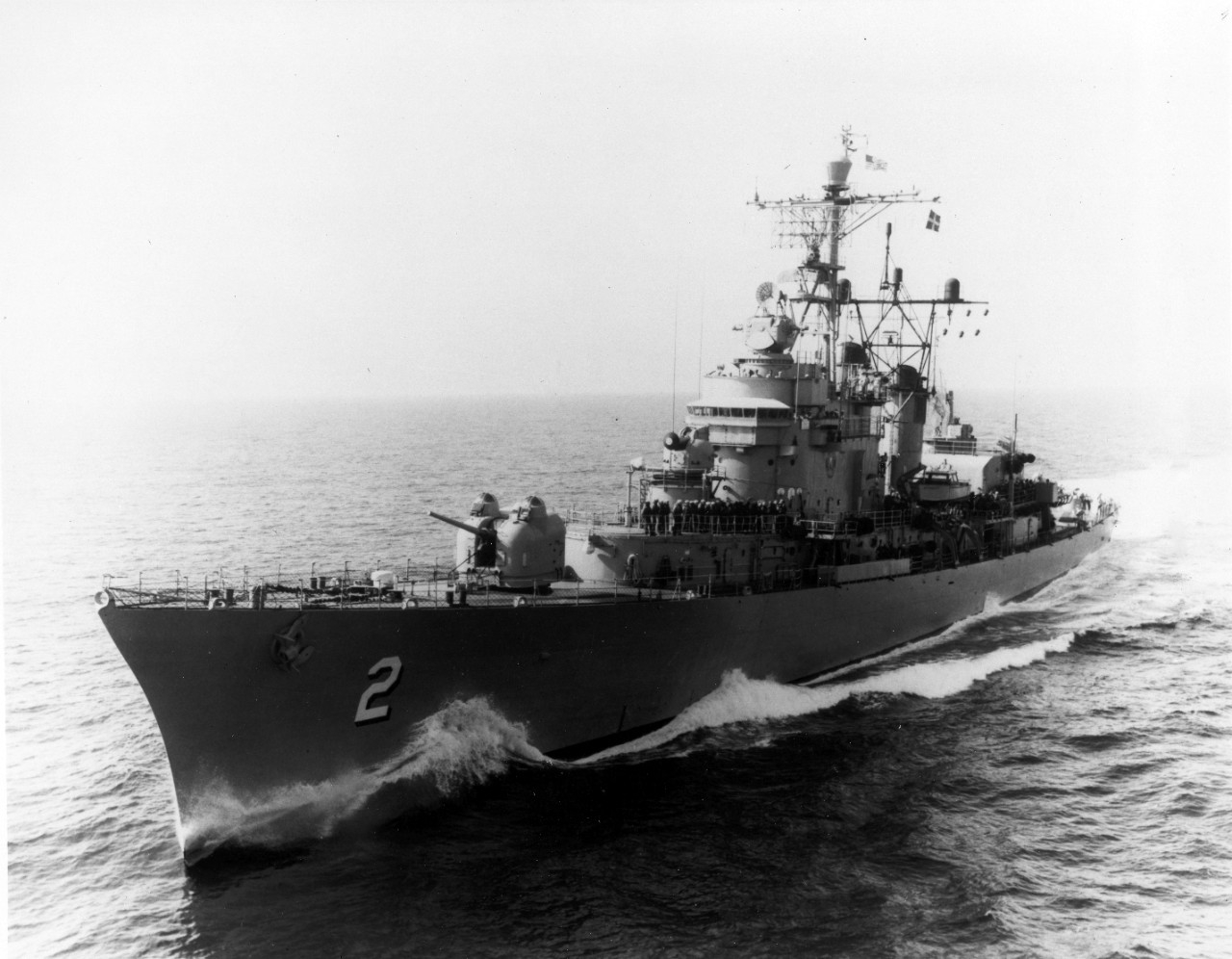 Marc Andrew Mitscher, born 26 January 1887 in Hillsboro, Wis., graduated from the U.S. Naval Academy 3 June 1910 and served 2 years at sea in Colorado. Commissioned ensign 7 March 1912, he served in San Diego during the Mexican campaign, and in September 1915 he reported for aviation training in North Carolina, one of the first ships in the Navy to carry an airplane. Designated naval aviator No. 33 on 2 June 1916, he served at various east coast naval air stations and in the Office of the Chief of Naval Operations before reporting to Seaplane Division 1. On 16 May 1919 he took off from Newfoundland as pilot of NC‑1. His plane and NC‑3 landed in heavy fog near the Azores, but heavy seas prevented them from joining NC‑4 in completing the first transatlantic air passage. For his part in this historic operation, Mitscher received the Navy Cross. 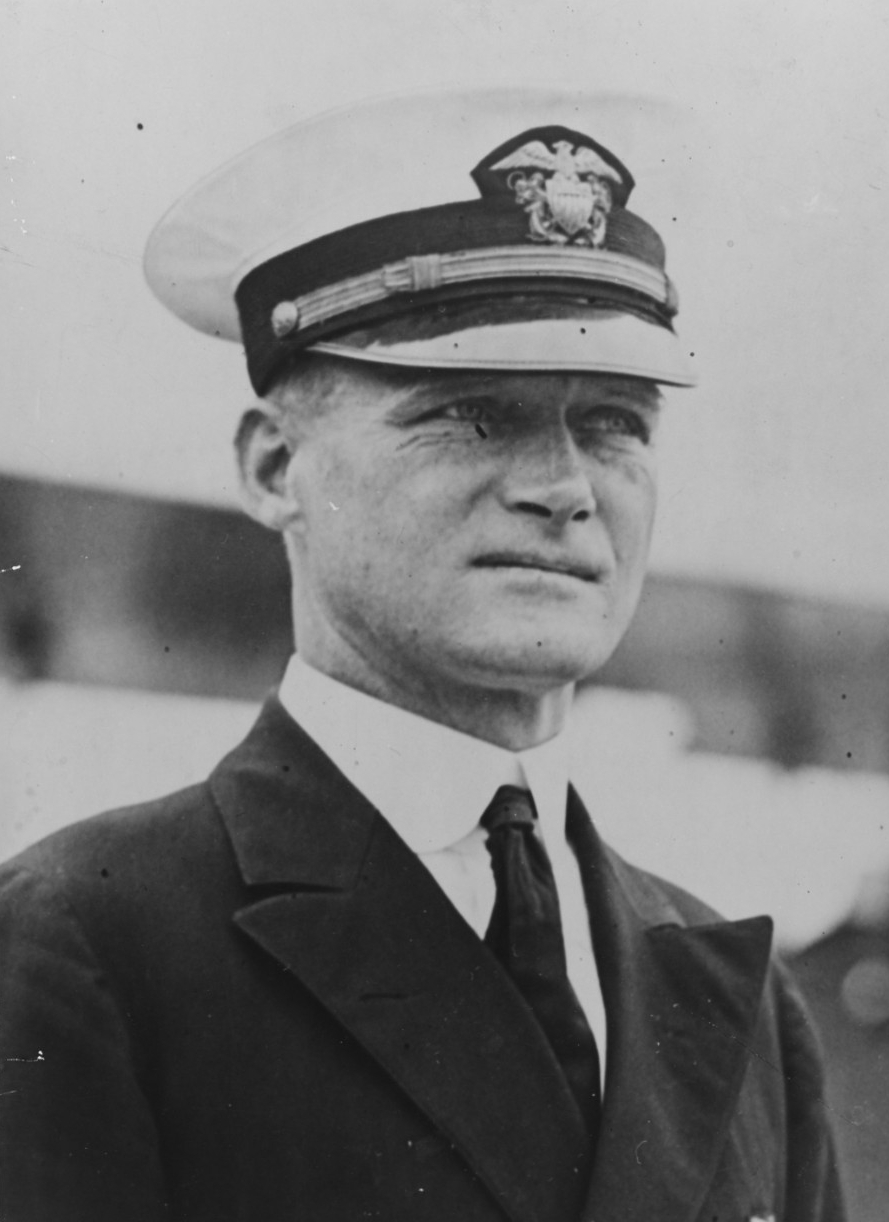 In addition to several shore‑based commands, Mitscher, during the next two decades, served in carriers Langley and Saratoga, seaplane tender Wright, and as commander, Patrol Wing 1. Between June 1939 and July 1941 be served as assistant chief of the Bureau of Aeronautics. Thence, he fitted out carrier Hornet and assumed command at her commissioning 20 October 1941. While under his command, Hornet launched Doolittle's Army bombers for airstrikes against Japan 18 April 1942 and thus gained fame as "Shangri La". He captained her during the mighty Battle of Midway 4 to 6 June, but was detached from the carrier 30 June less than 4 months before her loss 26 October during the Battle of Santa Cruz Islands.

Mitscher commanded Patrol Wing 2 until December when he became commander fleet air, Noumea. In April 1943 he became commander air, Solomon Islands, and from August to January 1944 he commanded fleet air, west coast. Returning to the central Pacific as Commander, Carrier Division 3, he was appointed vice admiral 21 March 1944 and ordered to take command of TF 58. This fast carrier task force, which operated alternately as TF 38, inflicted severe and irreparable damage on Japanese ground installations and against enemy naval and merchant shipping. His hard‑hitting, wide‑ranging carriers pounded the enemy from Truk to the Palaus, along the New Guinea coast, and throughout the Marianas. His eager, resourceful aviators devastated the enemy in the Battle of the Philippine Sea 19 to 20 June 1944. During the next year his warring carriers spearheaded the thrust-of‑death against the heart of the Japanese Empire, covering successively the invasion of the Palaus, the liberation of the Philippines, and the conquest of Iwo Jima and Okinawa. During these operations he repeatedly led the fast carriers northward to pound the Japanese home islands.

By July 1945 when he returned to the United States to serve as Deputy Chief of Naval Operations for Air, Mitscher had received, among other awards, two Gold Stars in lieu of a second and third Navy Cross and the Distinguished Service Medal with two Gold Stars. He served briefly as commander 8th Fleet and on 1 March 1946 became Commander‑in‑Chief, U.S. Atlantic Fleet, with the rank as admiral. While serving in that capacity, Mitscher died at Norfolk, Va., 3 February 1947.

After initial shakedown exercises off Cuba, Mitscher, a guided missile frigate, returned to Boston for further modification, followed by another shakedown cruise to Guantanamo Bay, ending 31 August 1954. Homeported thereafter at Newport, R.I., she conducted exercises off the east coast until 3 January 1956, when she sailed on a good‑will cruise to England, Germany, and France, returning to Rhode Island 10 February. For the next 5 years, she continued her east coast operations, deploying annually either to the northern or eastern Atlantic for NATO exercises.

On 9 February 1961, she departed her new homeport, Charleston, S.C., and steamed to the Mediterranean for her first 6 month tour with the 6th Fleet. Such deployments over the next 4 years involved her in further NATO exercises as well as 6th Fleet exercises. In August 1964, while in the Mediterranean, she stood off Cyprus to aid in the evacuation of American nationals, and then steamed through the Suez Canal to patrol the Red Sea and the Persian Gulf. On 2 March 1966, Mitscher departed Newport for the Philadelphia Naval Shipyard. There, on the 18th she decommissioned for conversion to a guided missile destroyer, DDG‑35. Recommissioned 29 June 1968, Mitscher reported the same day to ComCruDesLant for fitting out at Philadelphia, trials and shakedown exercises off the east coast, after which she will report to DesDiv 182 for duty in the Atlantic Fleet.