Adm. Blandy was a notable U.S. Navy flag officer who distinguished himself both during and after the Second World War (1939–1945). From 1941 to 1943, he served as the Chief of the Bureau of Ordinance and then later commanded Amphibious Group 1 in the Pacific theater. Following the war, he commanded Joint Task Force 1 during the atomic bomb tests at Bikini Atoll and then served as the Commander-in-Chief of the U.S. Atlantic Fleet from 1947 to 1950. 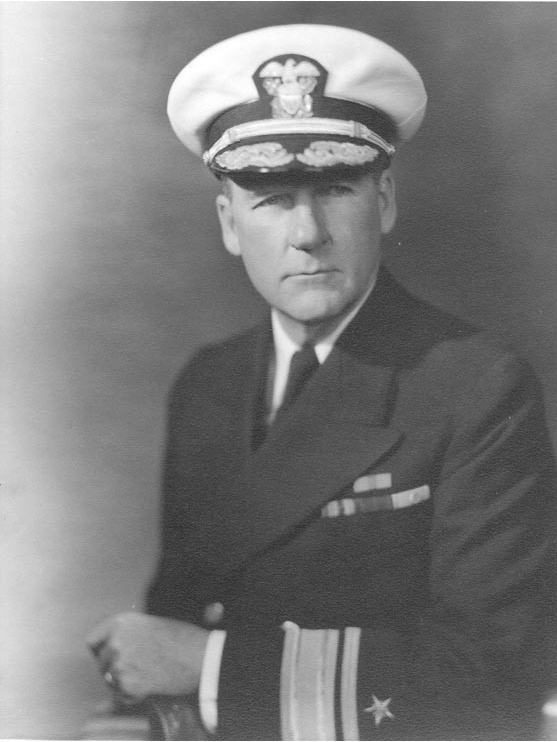 Blandy was laid down on 29 December 1955, at Quincy, Mass., by Bethlehem Steel Company; launched on 19 December 1956 and sponsored by Miss Hope Gilmour Blandy Lee the daughter of Adm. Blandy; commissioned on 26 November 1957, at the Boston Naval Shipyard, Boston, Mass., Cmdr. William F. Cafferata, USN, in command.

Following her sea trials in late January 1958, Blandy steamed to Guantanamo Bay Naval Base, Cuba, for her shakedown training. While in the Caribbean Sea, she made visits to Kingston, Jamaica and the U.S. Virgin Islands. With her initial training completed on 28 March 1958, Blandy began her first trans-Atlantic voyage and subsequently made port calls at Rotterdam, Holland; Goteborg, Sweden; Copenhagen, Denmark; Portsmouth, England; Casablanca, Morocco and Naples, Italy.

On 26 May 1958, Blandy rendezvoused with the guided missile cruisers Canberra (CAG-2) and Boston (CAG-1) off the Virginia Capes where final selection of the World War II Unknown Soldier was made. Following a ceremony at sea, Blandy proceeded to anchor in the Chesapeake Bay near the mouth of the Potomac River before making her way to the Naval Gun Factory [Washington Navy Yard]. On 28 May, in a nationally televised ceremony, the remains of the Unknown Soldiers were removed from Blandy while at anchor at the Naval Gun Factory, and then after lying in state, they were later taken to Arlington National Cemetery for interment at the Tomb of the Unknown Soldier.

Following the ceremonies in Washington D.C., Blandy steamed to the Boston Naval Shipyard, for a Post-Shakedown Availability that lasted through September 1958. Once deemed ready for duty with the fleet, Blandy reported to her first homeport at Newport, R.I., and was assigned to Destroyer Squadron (DesRon) 24. Shortly after joining the squadron, Blandy began operating with Anti-Submarine Warfare (ASW) Task Group (TG) Bravo. 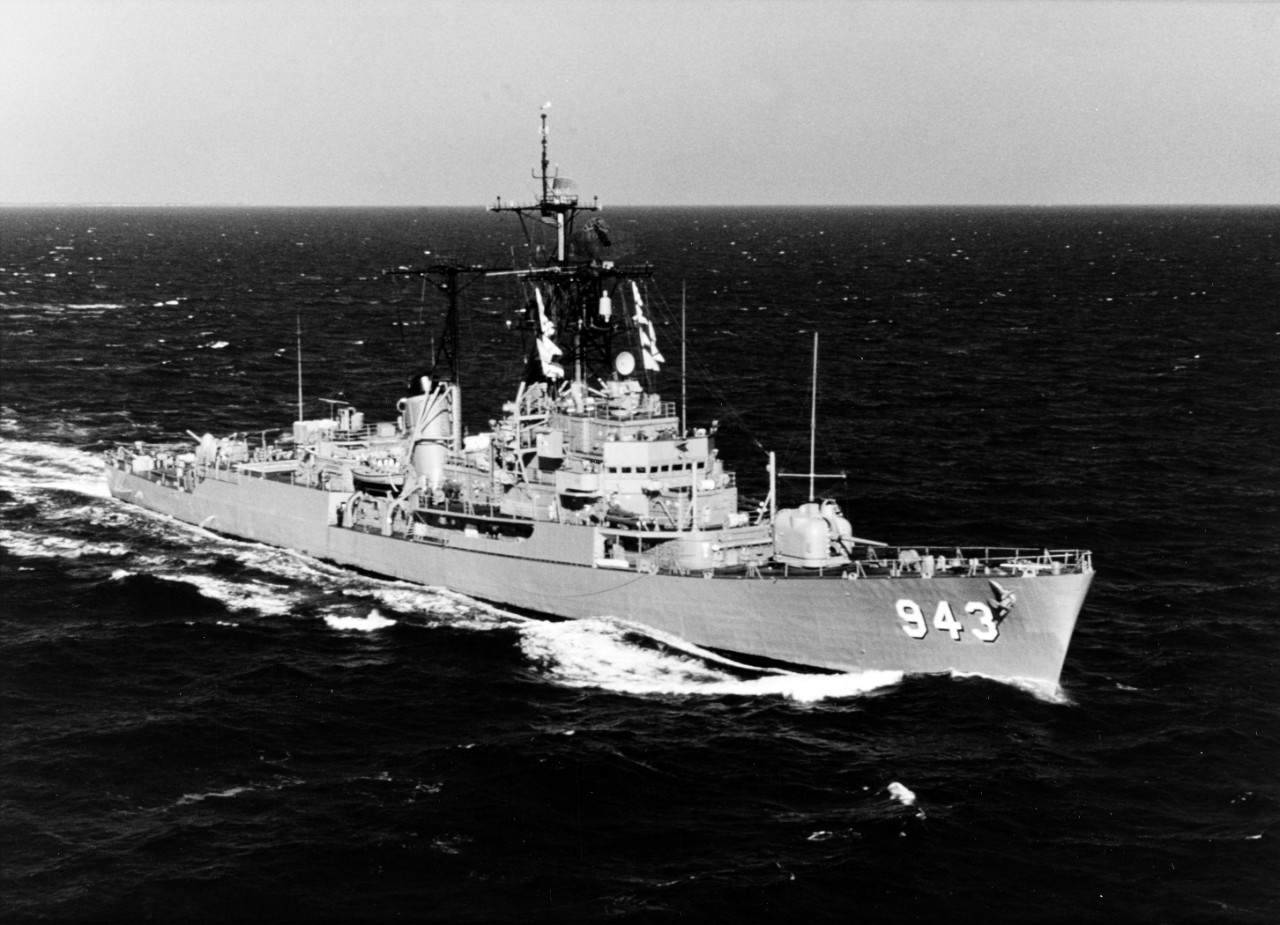 During the early part of 1960, Blandy operated with TG Bravo in the Eastern Atlantic. In June, she set out on another midshipman training cruise and steamed to the Mediterranean Sea. In the course of the voyage, she made port calls at Barcelona, Spain; Palma, Mallorca; Naples, Italy; and Cannes, France. That July, she became one of only two Atlantic Fleet destroyers to win the coveted Battle Efficiency “E” award. The accolade is presented only to those destroyers which have scored grades of “Excellent,” or above in all departmental competitive exercises. On 31 August, Blandy was honored again as the first recipient of a trophy presented by the Navy League of Rhode Island to the ship in the Atlantic Fleet that displayed the greatest proficiency in ASW.

In 1961, Blandy continued operating with TG Bravo. Late in the year, Blandy went into dry dock at the Boston Naval Shipyard for an overhaul following which she spent eight weeks training at Guantanamo Bay. She then served as a school ship at Fleet Sonar School, Key West, Florida. In the autumn, she was reassigned to TG Alpha and partook in a feasibility study, which determined that Forest Sherman class destroyers were capable of recovering an astronaut capsule.

In 1962, Blandy was dispatched to participate in Operation Springboard, however on her way back to Newport she was assigned to an astronaut capsule recovery group during the Mercury-Atlas 6 (MA-6) space mission. She served with the recovery group through February and then in April, the destroyer took part in Lanthphibex 1-62 off the coast of Puerto Rico.

With the Cuban Missile Crisis coming to a head in late October 1962, Blandy became one of the first ships to get underway for President John F. Kennedy’s “quarantine” of Cuba. During the operations there, she gained the distinction of forcing a Soviet submarine to the surface. Following the diffusion of the crisis in Cuba on 28 October, Blandy returned to her homeport. She then ended the year with a three-month midshipman training cruise in the Mediterranean Sea during which, she made port calls at Barcelona and Valencia, Spain, San Remo and Naples, Italy and Cannes.

In a ceremony at Providence, R.I., on 19 January 1963, Blandy received the annual Navy League Trophy, awarded to the Atlantic Fleet’s most outstanding ASW ship. In April 1963, Blandy became one of the first U.S. Navy ships to investigate the wreckage of the submarine Thresher (SSN-593), which had been lost off the coast of New England earlier that month.

In the fall of 1963, Blandy in company with DesRon 24 got underway with antisubmarine warfare support aircraft carrier Essex (CVS-9) to participate in a Central Treaty Organization naval exercise near the Indian Ocean. During the exercise, she operated with the navies of Pakistan, Iran and Great Britain. Additionally, she made port calls at Barcelona; Valetta, Malta; Aden, Adan Protectorate; Karachi, Pakistan; Massawa, Ethiopia; and Naples.

Blandy was assigned to DesRon 2 in late June 1964 and re-homeported at Norfolk, Va. From July to November 1965, Blandy participated in U.S. Second Fleet Blue-Gold operations and then on 27 November, weighed anchor from Norfolk for a deployment to the Mediterranean. During the voyage, the warship made stops at Naples; Marseille, France; Valletta; Palma and Gibraltar before returning to Norfolk in late March 1966. In the course of the cruise, a boiler fire resulted in the deaths of FN Phillip J. Mastripolito and BT2 Lee E. Manning.

Blandy deployed to the Mediterranean again in January 1967. During her time there, she participated in several extensive international exercises including Spanex 1-67 and Fair-Game V, operating in concert with Spanish, French, British and Italian warships.

In March 1968, Blandy set out on her first deployment to the warzone in Vietnam. The destroyer served in the region as a part of the Seventh Fleet from April to October 1968. Her first task upon arriving in Vietnamese waters was to provide fire support to the Third Marine Division operating at the Demilitarized Zone against the People’s Liberation Armed Forces of South Vietnam, the military arm of the National Liberation Front, or Việt Cộng.

During her time in the conflict area, Blandy fired 27,428 rounds of ammunition of all types on board, killed an estimated 148 Việt Cộng soldiers, and silenced numerous hostile gun emplacements. In total, she operated on the gun line for 19 straight days and while participating in Operation Sea Dragon off the coast of North Vietnam she sank 22 waterborne logistics craft.

Blandy’s exceptional performance providing naval gunfire support off Vietnam won her several awards. She received the Battle Efficiency “E” in July 1968 and then in August, she won the Arleigh Burke Fleet Trophy, which is awarded to the ship or aircraft squadron within the Atlantic Feet that achieves the greatest improvement in battle efficiency.

Blandy returned to Norfolk on 5 November 1968. In all, during her seven-month voyage she steamed over 60,000 miles and made numerous port calls all over the world. Her port visits included Kaohsiung, Taiwan; Sasebo, Japan; Hong Kong; Subic Bay, Philippines; Guam; Oahu; Midway; San Diego; and Rodman, Canal Zone.

On 2 January 1969, Blandy’s crew returned from Christmas leave and off-loaded her ammunition. The destroyer then steamed to the Philadelphia Naval Shipyard, Pa., where on 15 January 1969, she was decommissioned in order to undergo ASW modernization. To cap off her numerous achievements that same January, Adm. Thomas H. Moorer, the Chief of Naval Operations from 1967–1970, awarded Blandy the Meritorious Unit Commendation.

Blandy’s modernization included extensive changes to her structure, equipment and weaponry. Of primary note, she had a formidable ASW weapons system installed around her hull. Components of this system included new sonar and an RUR-5 Anti-Submarine ROCket (ASROC) system.

Improved and ready for sea again, Blandy was re-commissioned on 2 May 1970. Just a few months later on 17 September, she got underway for a two-month refresher training cruise near Guantanamo Bay.

The following year, on 1 January 1971, Blandy joined DesRon 26 and then later that summer on 6 July, she got underway with the rest of her squadron for a deployment to the Mediterranean. In the course of her six-month deployment in the Mediterranean, she participated in multiple Sixth Fleet and NATO exercises. She also worked closely with Italian and British naval ships during ASW exercise Deep Furrow and later accompanied destroyers from Greece, Turkey, Britain and Italy for exercise Double Edge. In all, Blandy made port calls at Gibraltar (16–19 July), Naples (23 July–3 August), Palma (7–11 August); Athens, Greece (27 August–10 September); Marmaris, Turkey (15–17 November) and Barcelona (4–7 December).

From 14 February to 3 March 1972, Blandy deployed to the Caribbean Sea for Operation Spring Board. While in the region, she gathered intelligence on a Soviet destroyer and submarine, as well as two Cuban submarine chasers.

On 17 October 1972, Blandy deployed for the second time to the waters off Vietnam. She arrived near the mouth of the Cửa Việt River on 23 November, and joined TG 75.9. On the same day of her arrival, she fired her first round at a Việt Cộng position north of Quảng Trị City. Blandy engaged North Vietnamese forces on a daily basis firing a total of 10,000 rounds of her main and secondary batteries from the gun line and destroying numerous bunkers, mortars and other military targets. While providing this crucial fire support, Blandy also had several near misses from enemy guns.

Because of the numerous actions in which she took part during her time in Vietnam, Blandy was awarded the Combat Action Ribbon. The destroyer left the Vietnam firing line on 28 January 1973, but continued conducting exercises in the Western Pacific for several more months. She finally returned to Norfolk on 6 April 1973.

From 15 November to 15 May 1975, Blandy deployed to the Mediterranean and participated in several NATO exercises. On 7 January 1976, Blandy began a yard period that lasted through November of that year. Operational again in 1977, Blandy then weighed anchor for an extended deployment to the Mediterranean, which lasted from 27 September 1977 to 25 April 1978.

During her 1977–1978 Mediterranean cruise, Blandy operated primarily with TG 60.2, and made numerous port calls during her time there. The destroyer also participated in several key exercises including an anti-air warfare training and missile exercise off Souda Bay, Crete (5 December 1977), ASW Week (20–25 January 1978), and National Week XXIV (2–13 February).

Civil unrest occurring in Iran in late 1978 prompted a buildup of U.S. military forces in the Persian Gulf. On 6 December 1978, Blandy deployed to the region and was still conducting surveillance operations there when massive demonstrations forced Shah Mohammad Reza Pahlavi to flee the country in January 1979. Blandy remained in the area ready to support any potential evacuations of U.S. citizens for several months. She finally began the voyage back to her homeport on 27 April 1979.

On 15 January 1980, Blandy entered Norfolk Shipbuilding and Drydock Corporation, Brambleton Plant, Norfolk, for a major yard overhaul that kept her there for the entire year.

On 30 November 1981, she steamed into the Atlantic on a deployment to the Indian Ocean via the Suez Canal. The cruise was largely meant to provide a U.S. naval presence in the region following the Soviet Union’s invasion of Afghanistan.

In November 1982, the U.S. Navy announced that the Forrest Sherman-class destroyers were to be placed out of service. This was due largely to the fact that they had been deemed “obsolescent (almost from commission) because they had the misfortune to join the fleet just as the guided missile revolution was beginning.”

Blandy was decommissioned at the Philadelphia Naval Shipyard on 5 November 1982.

Eight years later on 27 July 1990, Blandy was stricken from the U.S. Naval Vessel Register and eventually sold for scrapping.