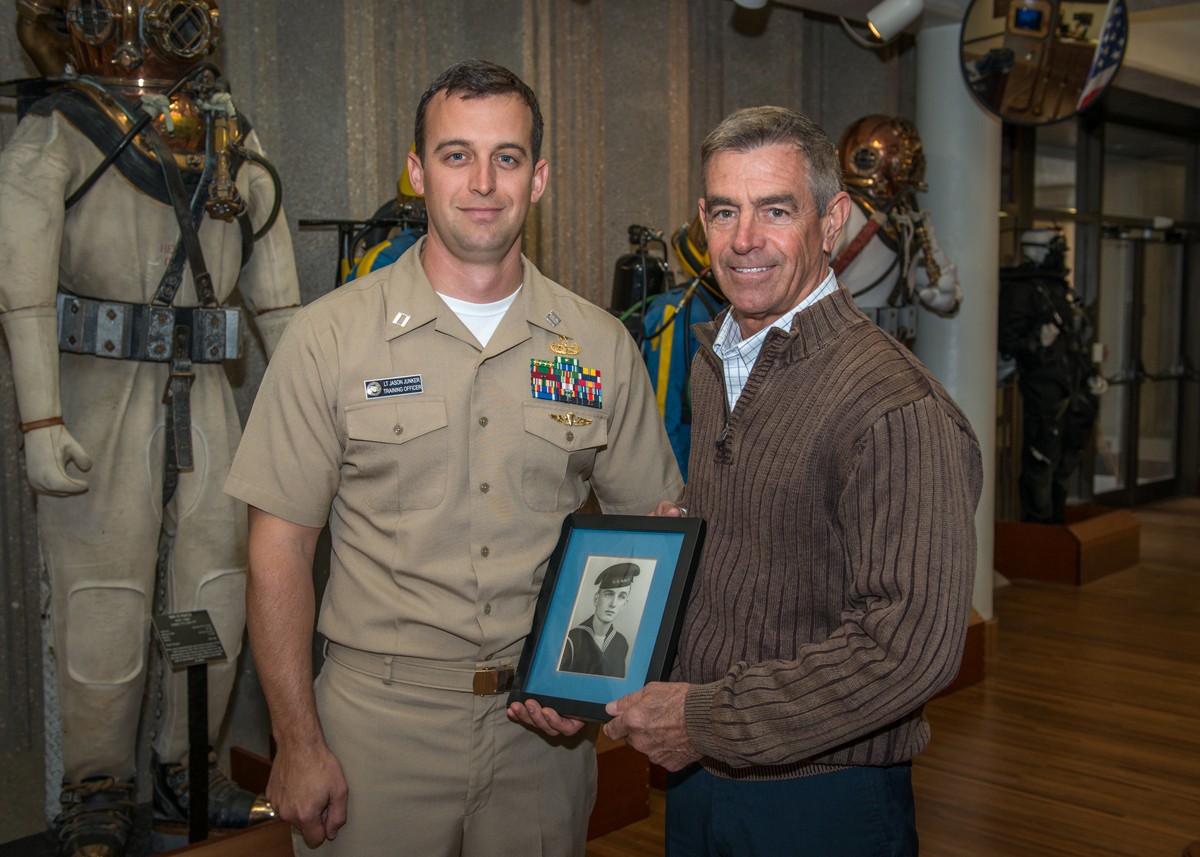 PANAMA CITY, Florida – Ask any military diver today or from yesteryear about what makes their military community so special and you’ll hear one word: Brotherhood. For two men stationed onboard Naval Support Activity Panama City (NSA PC) Florida, this brotherhood allows them to share both a personal and professional bond in the home of military diving during this, the Year of the Military Diver.

Naval Diving and Salvage Training Center (NDSTC)’s Training Officer Lt. Jason Junker, today serves in the U.S. Navy’s diving community as an Explosive Ordnance Disposal Officer just across the base from his father David Junker, a retired Master Chief Machinist Mate and diver, serves as the In-Service Engineering Agent for the Explosive Ordnance Disposal (EOD) systems at the Naval Surface Warfare Center Panama City Division (NSWC PCD). The latter Junker retired in 1997 after 20 years on active duty and four years in the reserves.

“Being a Navy diver to me means being part of a long legacy of Navy divers, conducting work under extraordinarily difficult conditions. That was very rewarding for me,” said Dave Junker. “On many occasions during my career, I reflected on how much I enjoyed the work and camaraderie, ultimately leading to a full career in this field.”

Following in his father’s impressive and successful footsteps, Jason graduated from Bay High School in 1997 and enlisted in the Navy in 1999. Working his way up through the enlisted ranks and the EOD community, he advanced to Chief Petty Officer before he was selected for the Seaman-to-Admiral program in which he earned his commission. Since first enlisting, Jason has served in Operations Enduring Freedom and OIF. He has been stationed at EOD mobile units two, six, and five. Today, Junker is NDSTC’s third in command.

“Being a military diver means having the honor to follow in the footsteps of some of the bravest men and women who have served our country,” said Jason. “It’s also about maintaining the proud tradition and heritage they built for us, while moving forward in today’s Navy and creating new milestones for future military divers to be proud of.”

While his most memorable dive job or duty station to date remains with EOD Mobile Unit Two in Kandahar, Afghanistan, he can embrace the legacy of being in the military dive community during the Year of the Military Diver commemoration. This year, 2015, is also the 100th anniversary of the Mark V dive suit and NDSTC’s 35th anniversary.

“The year of the military diver offers a time to gather the diving communities from all DOD services together to share experiences and discuss our history,” said Jason. “It provides a rare opportunity for young divers to give something back to those that went before us. It also offers education and quality interaction between our diving community and Bay County leadership.”

For Dave Junker, who grew up in Galion, Ohio, enlisted in the Navy’s submarine community in 1972. He fondly remembers when the facilities that now embody the home of military diving were being built on the Navy base in Bay County, Florida. It’s an area that he proudly calls home and has worked at NSWC PCD now for 10 years.

“I was on staff at the Washington Navy Yard until 1978 and I went through first class dive school here in 1980 when the old YDTS were here,” said Dave. “I had a four year break in service and was in the reserves with the Harbor Clearance Unit in Seattle. A chief petty officer I had worked for persuaded me to return to active duty.”

Initially, Dave was a “nuke” before he became a Navy diver and was stationed onboard USS Proteus (AS 19), and served in a staff billet at Navy First Class Dive School, Washington Navy Yard before the function was transferred to NDSTC by 1980. He was also stationed at Naval Medical Research Institute, Bethesda, Maryland, MV Seaforth Clansman with the British Ministry of Defense diver exchange program, USS Ortolan (ASR 22) as a saturation diver, and the Submarine Development Group One, where he worked deep submergence operations support. Finally, he worked at the Navy Experimental Diving Unit (NEDU) located onboard NSA PC in Panama City, Florida where he served as an unmanned test director and unlimited dive supervisor. Of all the wide range of experiences Dave had throughout his 20 year of Navy diving, he fondly recalls his work as a research subject between 1984 and 1987 at the Naval Medical Research Institute.

“What made this job so memorable for me was the testing and understanding the limits of physiological and psychological limitations for extended underwater missions,” said Dave.

Today, Dave reflects on what being a Navy diver has meant to him.

“To be part of a long legacy of Navy divers, conducting work under extraordinarily difficult conditions was very rewarding,” he said. “On many occasions during my career, I reflected on how much I enjoyed the work and camaraderie, ultimately leading to a full career in this field.”

Today, Dave continues to support his dive community but these days it’s as a federal civil servant working on EOD systems at NSWC PCD, which is a research, development, test and evaluation facility.  Over the years, he has not only watched the base grow into a military dive hub, he has been a major part of it.

“Certainly, in our local community, Navy divers are well known and are hopefully well regarded,” said Dave. “Panama City has been the hub of Navy dive training since 1980 when NDSTC opened, and with the Navy Experimental Diving Unit (NEDU) being here since 1970.”

Military divers have been stationed or trained at the Navy base for almost 60 years when divers worked at the base – then called the Mine Defense Laboratory – on mine countermeasures, and diving and life support programs. Those programs have endured and are now supported by NSWC PCD where Dave Junker is employed working engineering and system development for EOD and diving.

“For many divers, Bay County feels like your hometown because at some point, we’ve all come through the dive school for training,” said Jason. “Small, specialized communities, like EOD or divers, tend to go unnoticed most of the time to the public. Panama City and Panama City Beach are unique in that they are exposed to such a large number of men and women divers from all services and Department of Defense (DoD) organizations. The local public seems to recognize the work and sacrifice that the diving community has made and has supported our service members extremely well.”

"Jason Junker is a tribute to Panama City.   He grew up in this city and graduated from Bay High School,” said NDSTC Commanding Officer Cmdr. Hung Cao, USN. “Today, he is not only walking in his father's footsteps but he is also the training officer responsible for developing the next generation of divers."