The first ship to be named Inchon.  From the first days of the Korean War, Gen. Douglas MacArthur had hoped to deliver a counterstroke directed at the Inchon-Seoul region. Operation Chromite was planned for this area. Planners had to take into account the extraordinary tides and currents of the Yellow Sea, the lack of suitable landing beaches, and the mud banks and islands which restricted the long approach to Inchon. Joint Task Force 7, under the command of Vice Adm. Arthur D. Struble, consisted of 230 ships of varying types. From these ships on 13-17 September 1950, the First Marine Division with attached U.S. Army and Republic of Korea units landed and captured the city of Inchon and advanced into the mainland en route to the re-capture of Seoul. On the morning of 15 September, Admiral Struble received a visual message: “The Navy and Marines have never shone more brightly than this morning. MacArthur.” The invasion was a superb example of teamwork and adaptability under adverse conditions. Rarely had so small a force entered so large a land mass under such difficult conditions and at such a great distance from supply bases.

Inchon (LPH-12) was laid down on 8 April 1968 at at Pascagoula, Miss., by Litton Ingalls Shipbuilding; launched on 24 May 1969; sponsored by Mrs. Charlotte Brooks, wife of Representative Jack Brooks, Texas; and commissioned on 20 June 1970 at Pensacola, Fla., Capt. Arthur H. Cummings Jr. in command. 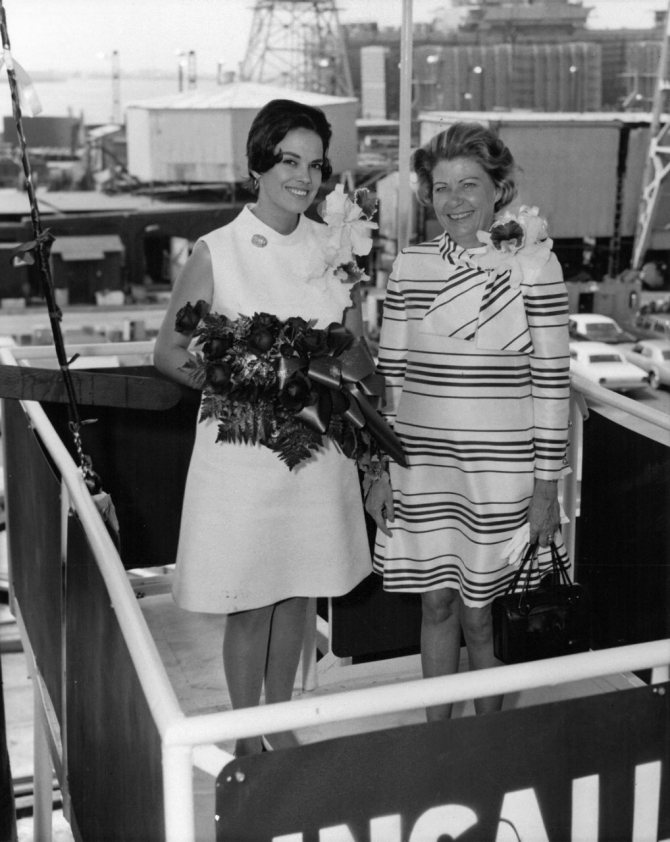 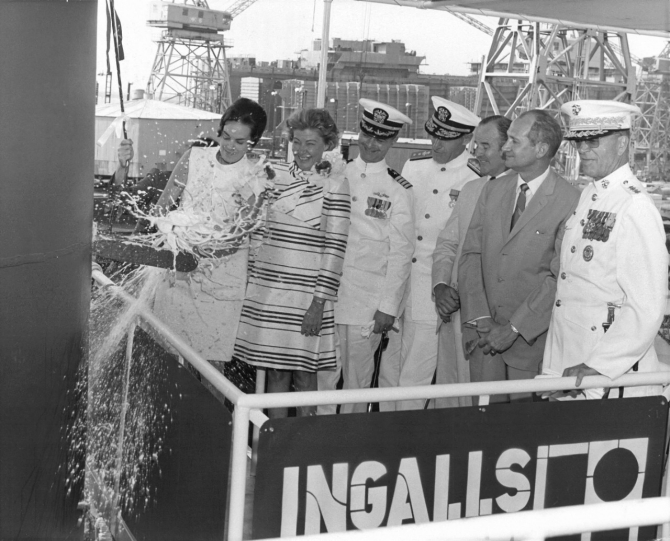 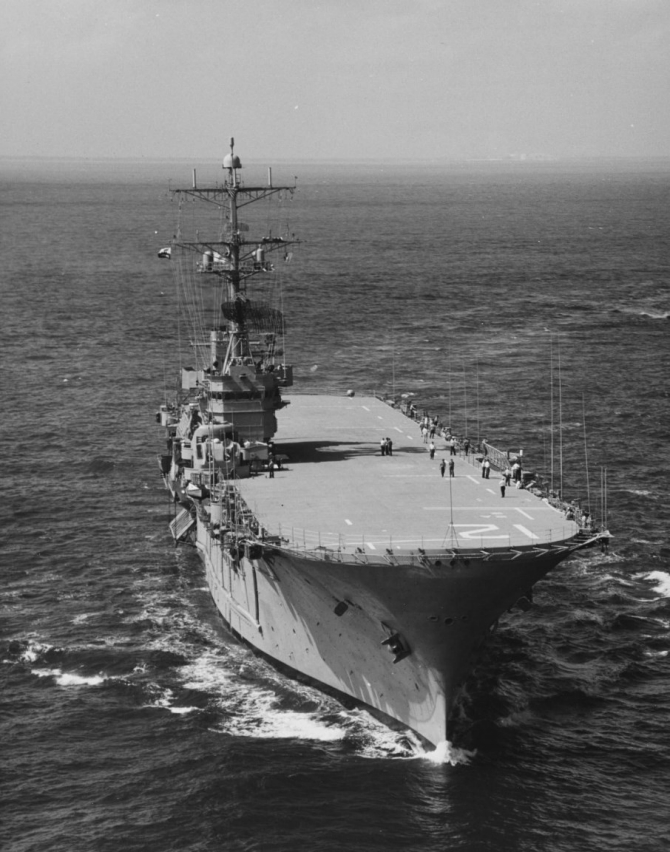 Inchon underway in the Gulf of Mexico, 11 May 1970. (U.S. Navy Photograph NH 72187, from the collections of the Naval History and Heritage Command)

In 1972-1973 Inchon circumnavigated the globe and returned to Norfolk, Va. In February 1973 Inchon was attached to Task Force 78 for Operation End Sweep, the U.S. Navy’s effort to clear U.S. mines from North Vietnamese waters after the signing of the Paris Peace Accords. Those operations were suspended from 17 April through 17 June. They resumed 18 June and End Sweep was completed on 18 July. 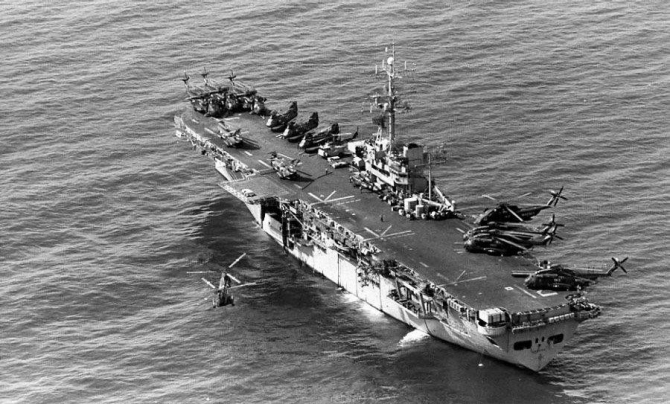 On 9 July 1975, more than 100 sailors and marines from Inchon and amphibious transport dock Shreveport (LPD-12) fought a fire on board a Spanish merchant vessel at Palma de Mallorca, Spain. On 16 December, Inchon and oiler Caloosahatchee (AO-98) were in a minor collision during refueling in rough seas west of Italy.

On 5 February 1980 Inchon collided with dock landing ship Spiegel Grove (LSD-32) while refueling in the Atlantic en route to the Mediterranean Sea, with reportedly no injuries and only minor damage. On 7 October 1981 Inchon suffered a boiler explosion while preparing to get underway from Norfolk, Va.

From 29 October 1982 to 15 February 1983 Inchon earned the Navy Unit Commendation and the Navy Expeditionary Medal serving as the flagship of Amphibious Squadron 6, on station at Beirut, Lebanon.

On 13 August 1986, Inchon suffered a casualty to the ship's evaporators while underway to Morehead City, NC, causing the ship to return to Norfolk, Va., for two days of repairs. On November 1989 a fire in the hangar deck of Inchon injured 31 people while the ship is docked for maintenance in Norfolk, Va.

In 1994 Inchon deployed to the Mediterranean Sea and Indian Ocean to conduct Operation Continue Hope off the coast of Somalia and Operation Deny Flight off the coast of Bosnia. Following a six-month deployment, Inchon remained in home port for only two weeks, before she was called upon to assist in Operation Support Democracy off the coast of Haiti.

On 1 March 1995 Inchon was re-classed as a mine countermeasures ship (MCS-12) and commenced a 15-month conversion/overhaul by Ingalls Shipbuilding.

In July 1996 Inchon changed homeports to Ingleside, Texas, home of the Navy’s Mine Warfare Center of Excellence. Sustaining extended mine countermeasures operations at forward deployed locations required extensive command and control and logistics capabilities. Inchon provided both a landing platform for MH-53E Sea Dragon mine-sweeping helicopters and repair and re-supply facility for Avenger-class mine countermeasures ships and Osprey-class coastal minehunters. From March-July 1997, Inchon made her first deployment in her new capacity, successfully demonstrating her capabilities. Inchon once again deployed in 1999, from April through August, and the crew provided critical heavy lift support to Operation Shining Hope, the humanitarian relief effort for Kosovar refugees in the Balkans. 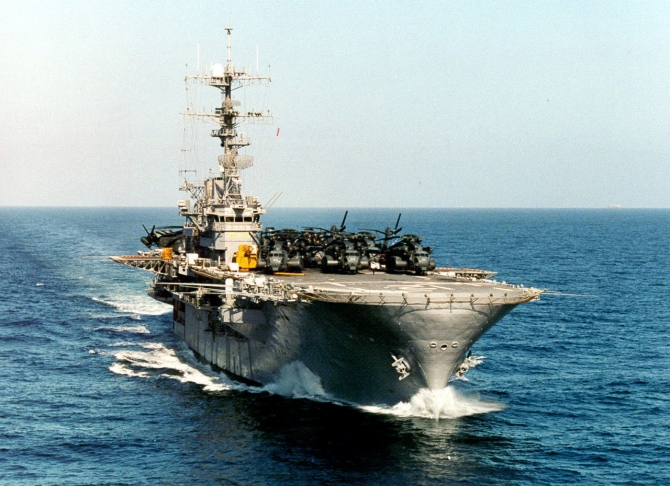 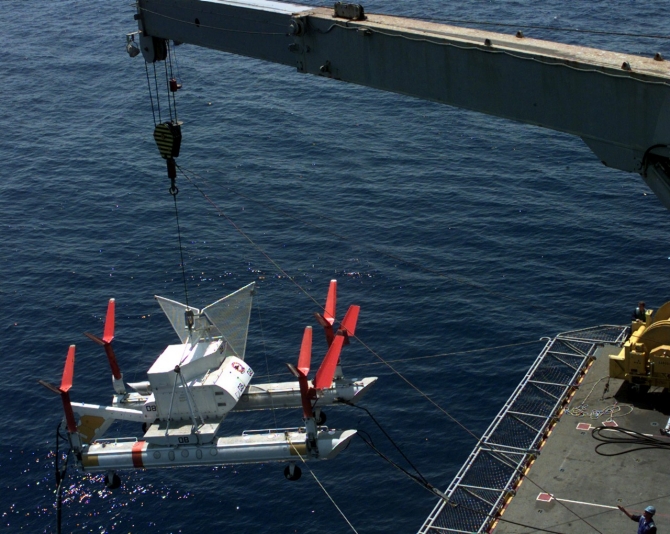 A MK-105 Sled is lowered into the water from Inchon during a mine countermeasures exercise in the Adriatic in support of Operation Shining Hope, 27 May 1999. (Photographer's Mate 2nd Class Brian McFadden, U.S. Navy Photograph 990527-N-6019M-501, Navy.mil Photos)

Inchon’s final deployment began in April 2001. On 19 October 2001 a fire was discovered in the ship's Boiler Room at approximately 1742. Firefighting crews from Inchon and Naval Station Ingleside Fire Department responded to the scene, assisted by rescue and assistance teams from several other ships based at the station. Crews extinguished the fire at approximately 1826, but not before Machinist's Mate Third Class Ronnie Joe Palm Jr., had been killed and seven other sailors injured. Six of those were treated for minor burns or smoke inhalation and released; one remained hospitalized in a local facility. At the time of the incident, Inchon had completed tests of her engineering and operational systems after a scheduled planned maintenance availability at Naval Station Ingleside. 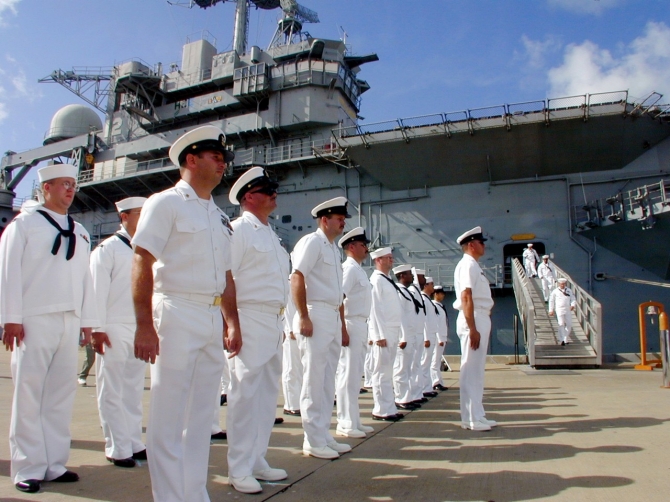