9/11 Attack on the Pentagon

Artifacts recovered from the rubble of the Pentagon 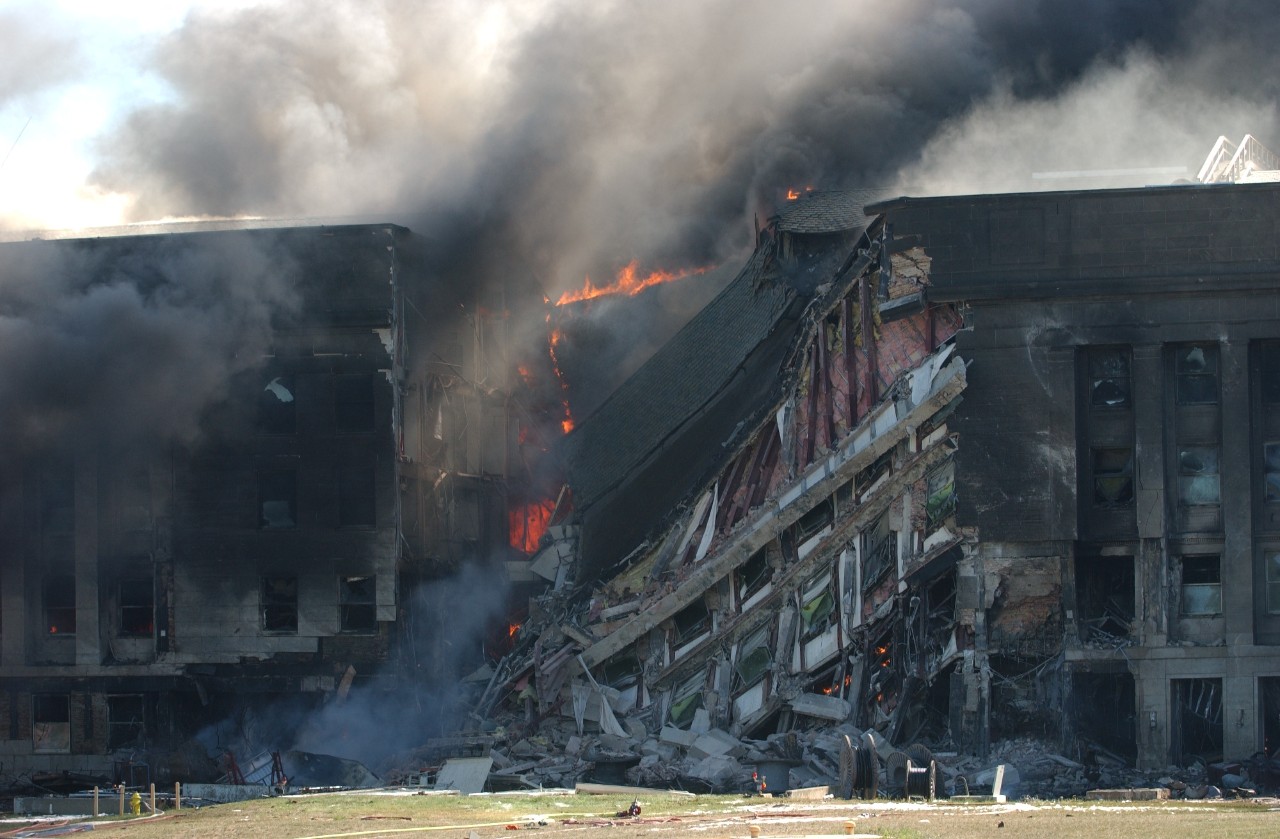 Title: Firefighters had to back away from the building after the E Ring of the Pentagon collapsed, 11 September 2001
Description: DoD Photo Number 010911-M-4122I-051 (U.S. Marine Corps photo by Cpl. Jason Ingersoll) (Released)
Catalog #: From Navy Archives Collection AR/670

On September 11th 2001, American Airlines Flight 77 was high-jacked and flown into the west wall of the Pentagon at 9:37 am in an act of terrorism. 125 Department of Defense employees, 64 passengers and crew were killed in the attack along with the 5 terrorists who had hijacked the aircraft.

In the weeks following the attack, a group of museum professionals from the Navy, Army, Marine Corps, and Air Force worked together to collect artifacts from the damaged areas of the Pentagon for each of their collections that would provide a visual interpretation of the attack and embody the devastation that occurred on that day.

The artifacts below are a small sample of the items collected. Each object bears the physical scars of the destruction and devastation of that day. 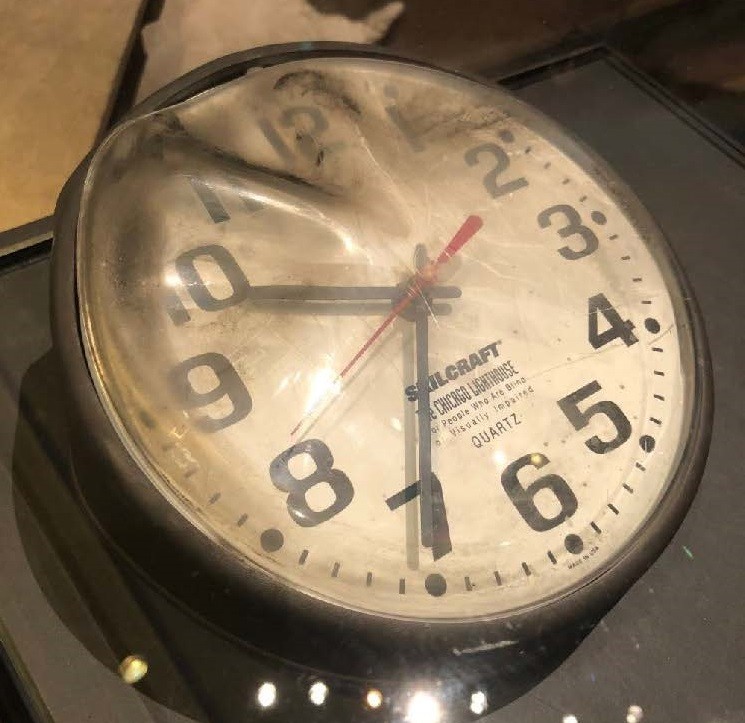 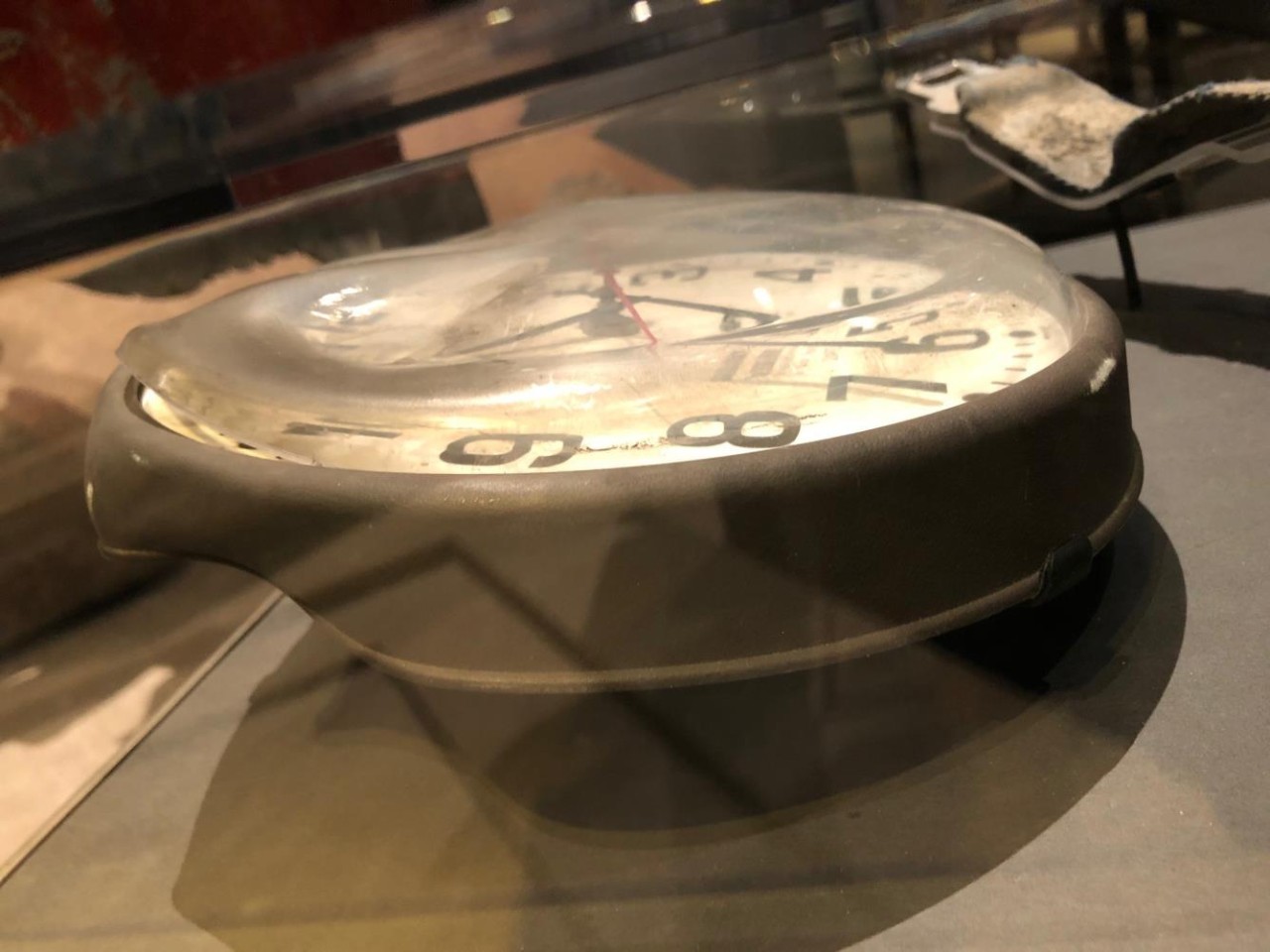 One 9" circular office clock recovered from the Pentagon's Navy Command Center following the attack on September 11, 2001. This 12-hour clock has a black colored plastic body with a clear plastic cover. The black hands are frozen at the time of impact, 9:37 a.m. The piece is heavily damaged from the heat of the fire and remains covered in soot. This artifact is currently on display at the 9/11 Memorial & Museum in New York. Photos courtesy of 9/11 Memorial & Museum.
NHHC 2001-91-6 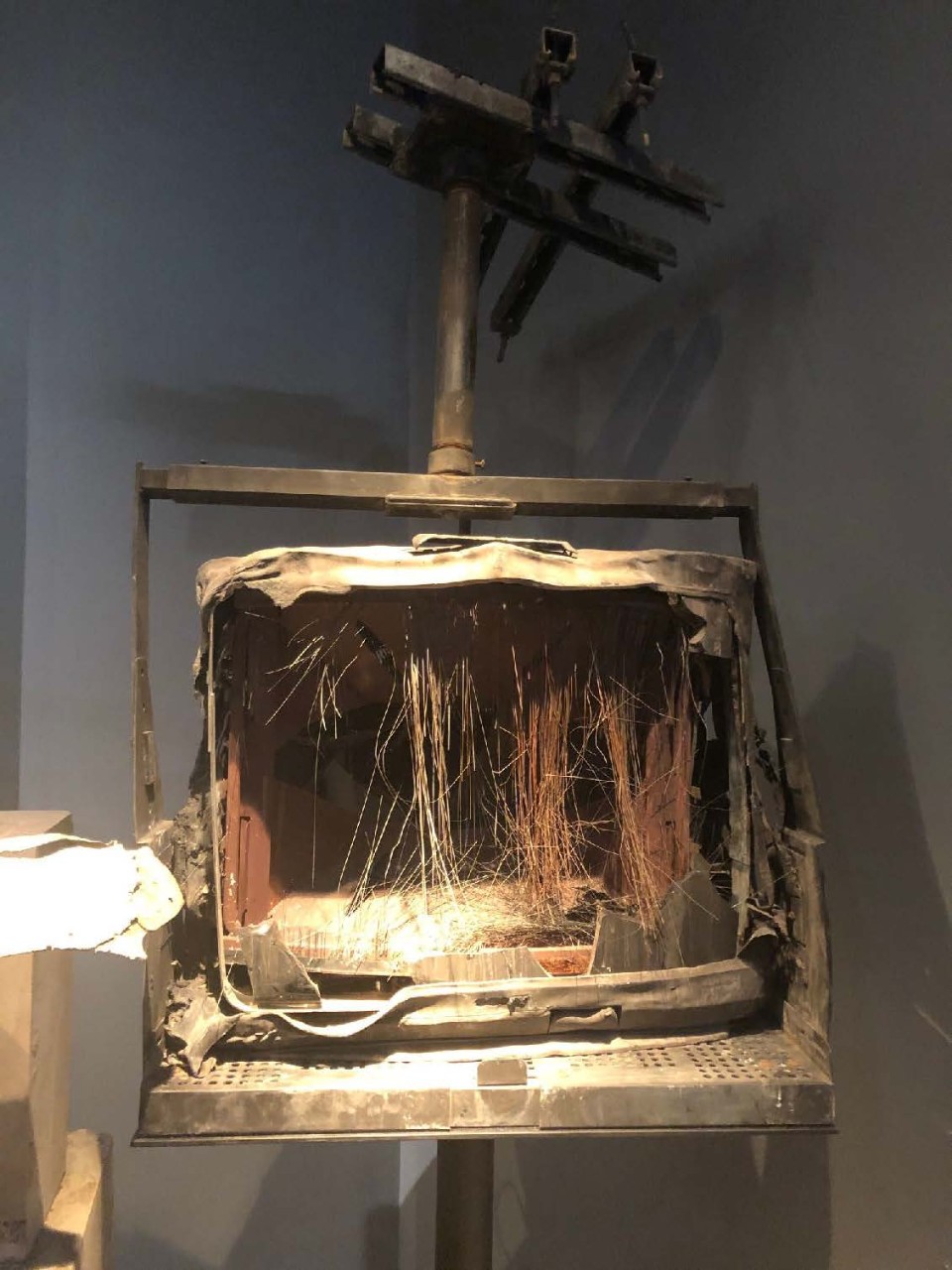 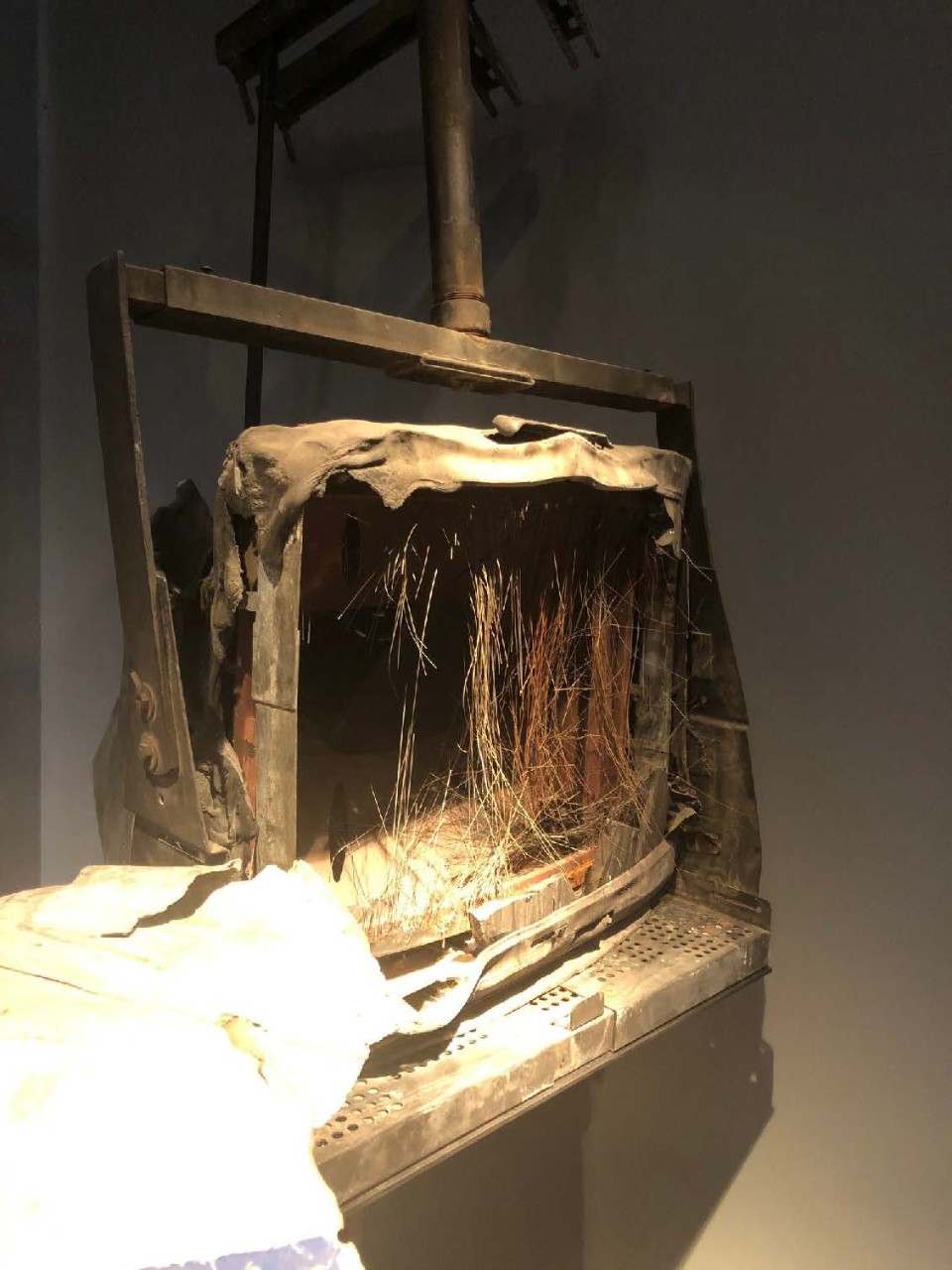 One television and mount recovered from the Pentagon’s Navy Command Center following the terrorist attacks on September 11, 2001. The twenty-four inch, square-shaped television has exposed wiring and melted edges. Attached to the television mount, at the top, is the hanging bracket. The television was used for viewing commercial new feeds within the Command Center. This artifact is currently on display at the 9/11 Memorial & Museum in New York. Photos courtesy of 9/11 Memorial & Museum.
NHHC 2001-91-15 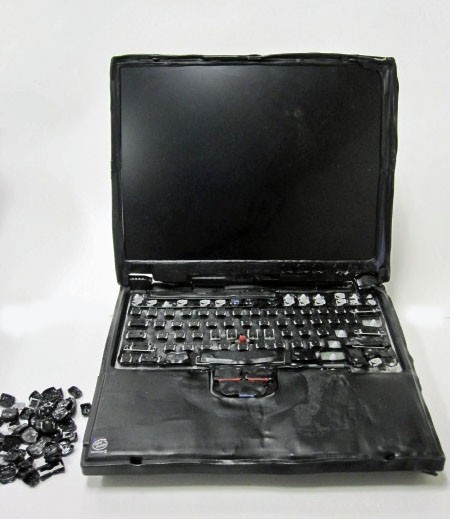 One laptop computer recovered from an office in the Pentagon following the attack on September 11, 2001. It is an IBM ThinkPad with an Intel Pentium II processor and black in color. The laptop is inoperable and severely damaged by heat. The edges of the black plastic case are warped, with strap impressions on top. The key covers are melted and many are no longer attached to the keyboard. The laptop underwent a conservation review and treatment in 2021 in preparation for the 20th anniversary of the attack.
NHHC 2001-91-1 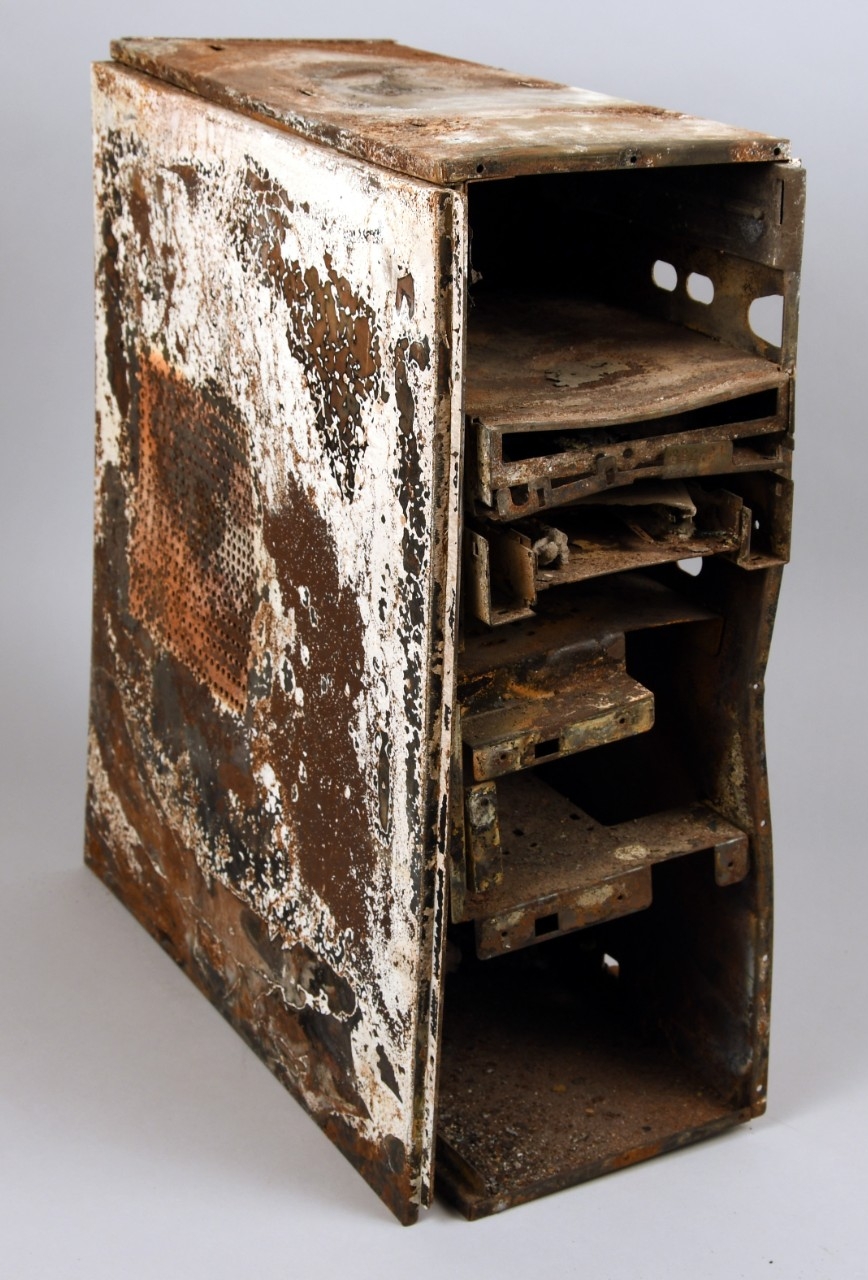 The remains of a desktop computer tower, recovered from the Pentagon after the September 11, 2001 attack. The case has heavy physical, fire, and water damage from the attack and subsequent fire suppression operations. All hardware, including the hard drive have been removed from the case.
NHHC 2001-91-18

One Bifold Litter Model 90C black mesh folding stretcher with green legs made by North American Rescue Products that was used during recovery operations at the Pentagon following the attacks on September 11, 2001. Fabric is stained in multiple locations. White dust is present on the feet and the handles.
NHHC 2001-91-32 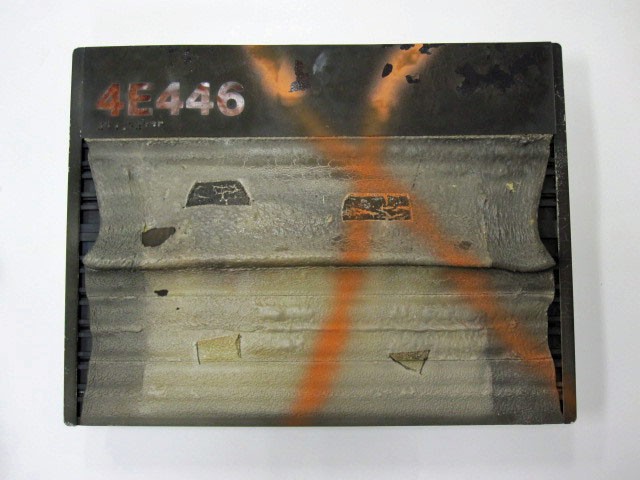 One office door sign. Rectangular-shaped, black plastic with an orange X spray-painted across the face of the sign. The numbers 4E446 are colored red in the top left corner. The braille version is located below. The sign was originally located on the 4th floor, E ring, room 446. E ring is the outermost ring of the Pentagon. The rooms with numbers in the 400s were located on the side of the Pentagon where the plane hit. The orange X means search and rescue checked the space for survivors and remains.
NHHC 2001-91-13 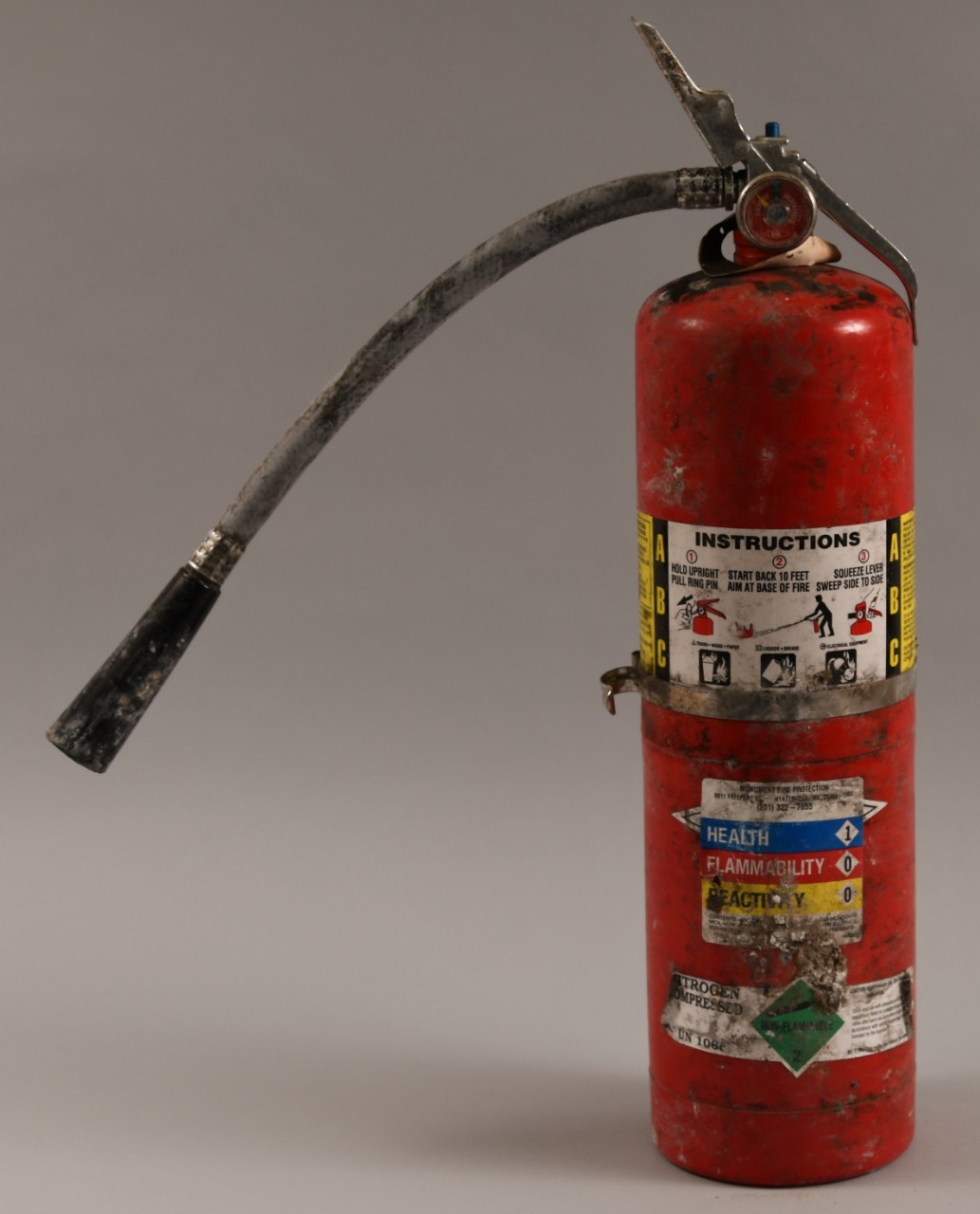 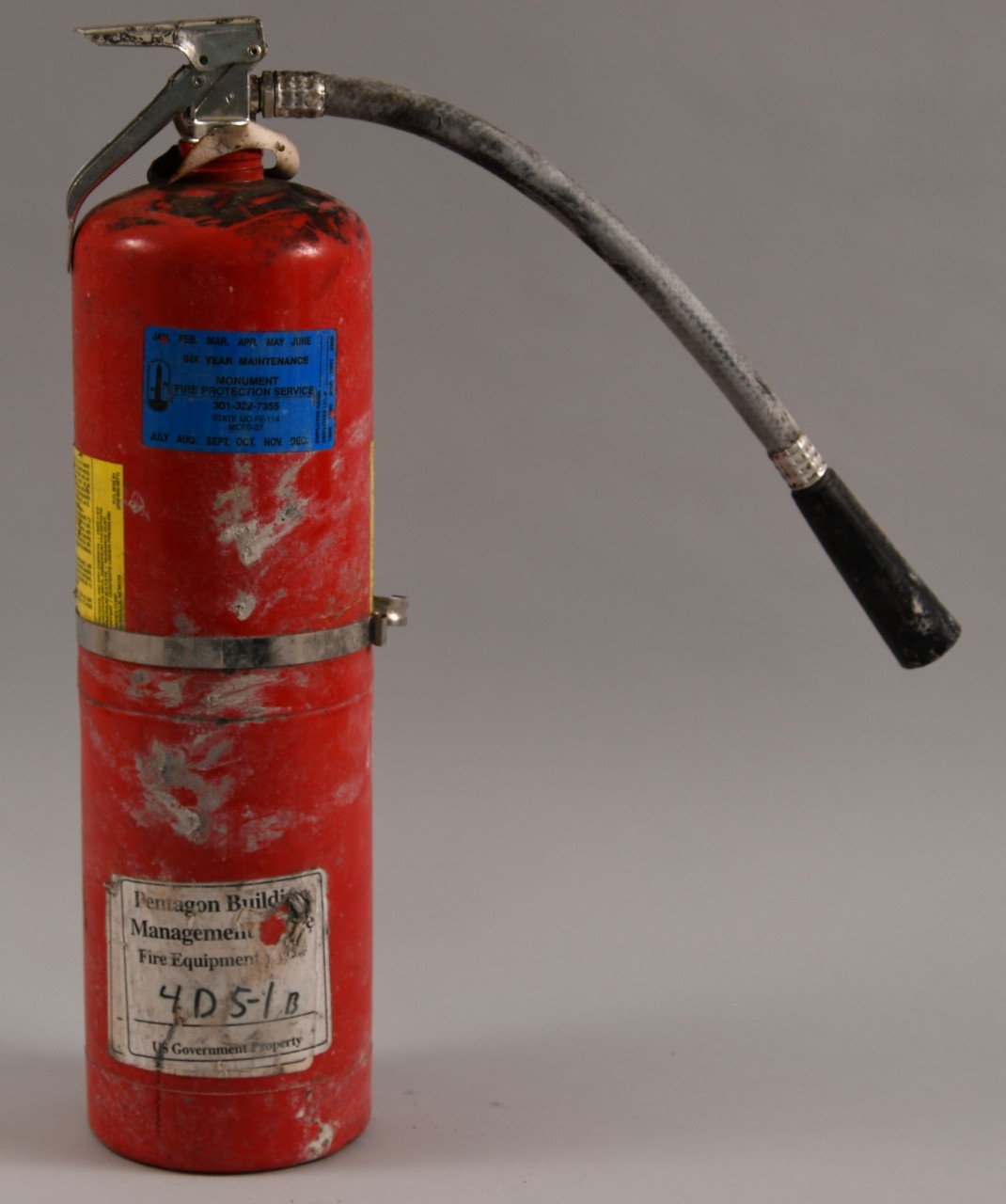 One fire extinguisher. Cylindrical shaped red metal body with a black rubber hose and actuator handle at top. Printed instruction decals are attached to body along with a US Government Property sticker. This fire extinguisher was part of the Pentagon’s onsite building management fire equipment and an example of what safety equipment was immediately on hand for office workers on the morning of September 11, 2001. While it is unknown where the fire extinguisher was located inside of the Pentagon or when it was used, the pressure gauge near the handle indicates that it is in need of a recharge and had been used before being salvaged from the wreckage.
NHHC 2001-91-5 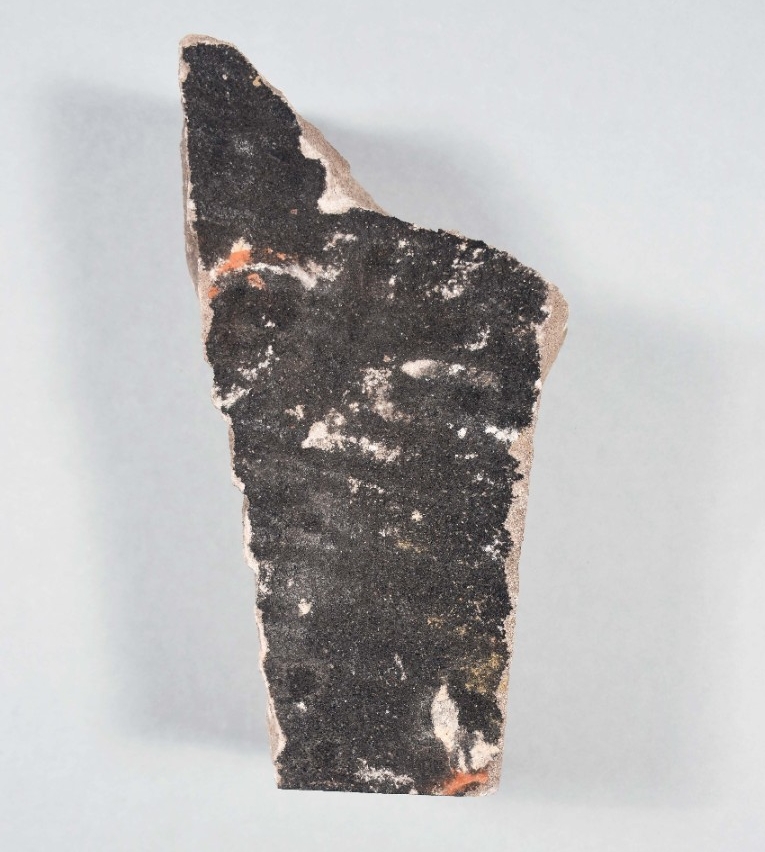 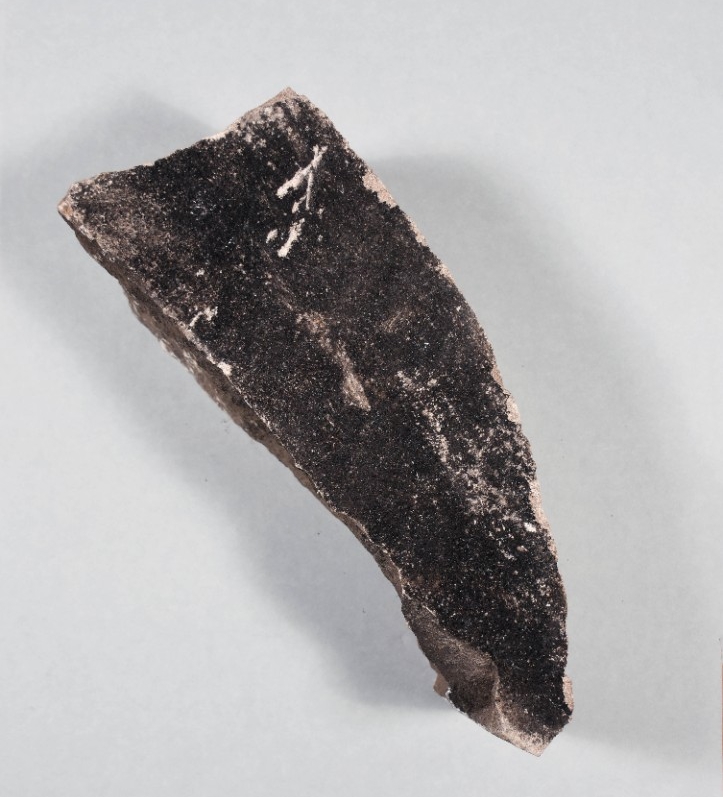 Stone Fragments from Facade of the Pentagon

Two damaged pieces of the façade of the Pentagon in Washington, D.C. dislodged by the terror attacks of September 11, 2001. The two pieces exhibit irregular shapes and damage patterns caused by the destruction and subsequent fires. The smoke and fire caused portions of the normally grey stone to permanently blacken from exposure.
NHHC 2001-91-27, NHHC 2001-91-28 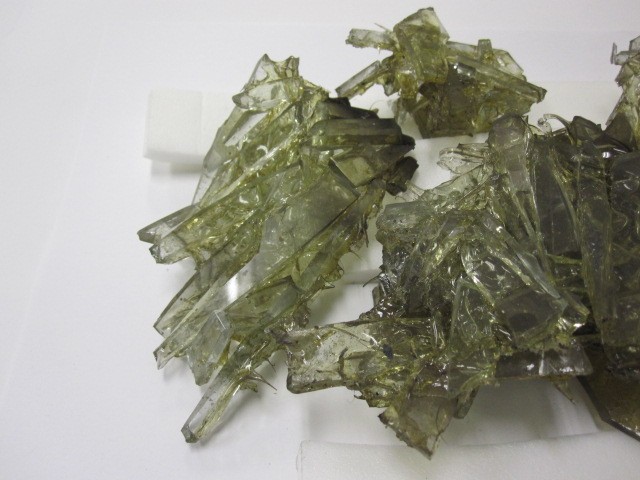 Fragments of window glass recovered from the USMC Aviation Conference Room at the Pentagon following the attack on September 11, 2001. The glass is blackened, charred, and fused together from the intense heat of the fires caused by the crash.
NHHC 2001-91-10

In the days following the terrorist attacks, as the world began to process the tragedy that had befallen the United States, individuals across the globe sought a way to express their sympathy with a grieving nation. The objects below are a sample of those memorials. 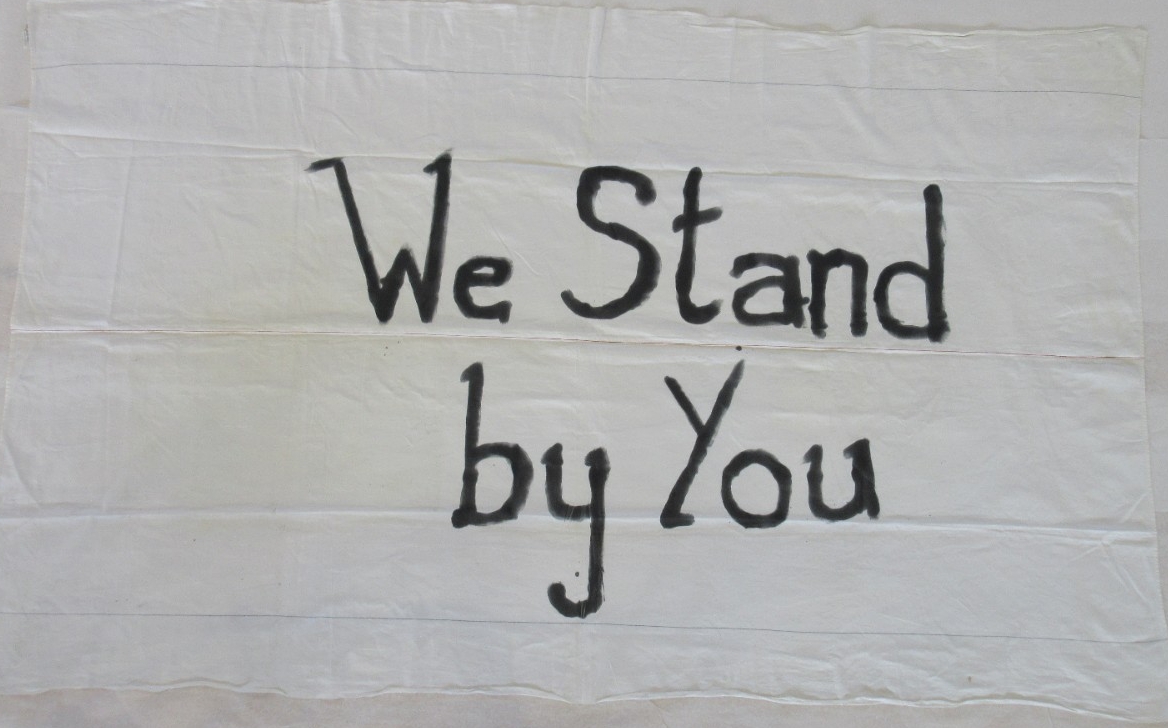 "We Stand By You" Banner

White bedsheet inscribed with the words "We Stand By You." The banner was made and displayed by the German destroyer FGS Lutjens to USS Winston Churchill (DDG-81) following the terror attacks on the United States.
NHHC 2020.049.001 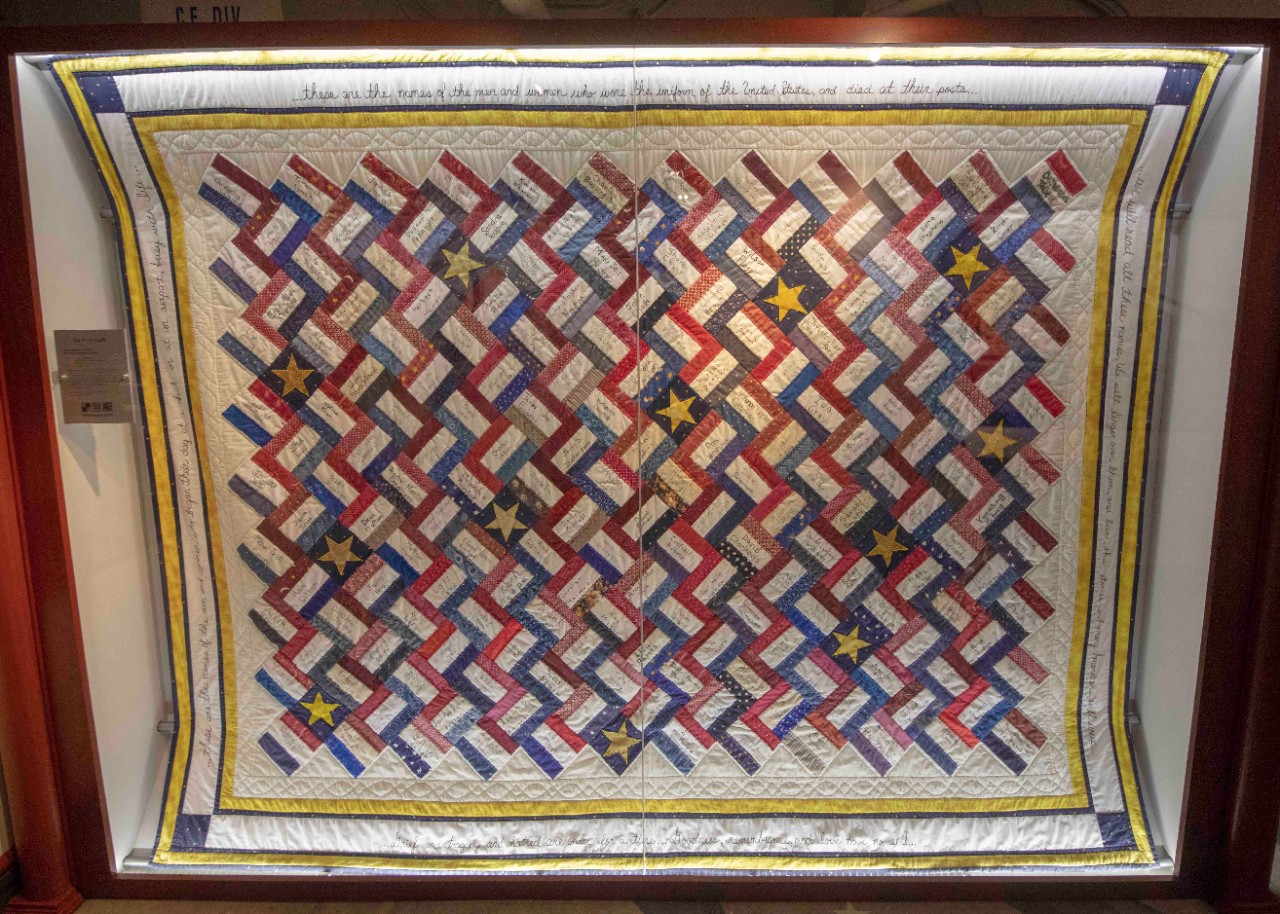 Handmade quilt presented to the Pentagon to honor the memory of the people whose lives were lost during the attack on the Pentagon. The quilt squares are inscribed with the names of those who perished.
NHHC 2001-123-1