Armed Guard of USN sailors use  6" 40 Caliber gun to fire on submarine.

The SS Mongolia was a steamer, a merchant ship launched on July 25th 1903 which formed part of the Atlantic Transport Co. fleet in October 1915.  On March 17th 1917 she took on an armed guard of United States Sailors and was armed with three 6 inch guns. This was a result of President Woodrow Wilson’s initiative to arm merchant ships to safeguard American lives and property in an increasingly tense and hostile diplomatic relationship with Germany. Germany’s declaration of unrestricted submarine warfare on January 31st 1917 prompted the cessation of diplomatic relations with Germany and the eventual involvement of American forces in World War I.   “All ships would be sunk without warning, within a designated war zone around Britain and France in the Atlantic and around France and Italy in the Mediterranean.”

Mongolia was attacked by a German submarine on April 19th 1917 at 0520. She fired on the submarine wrecking the periscope and conning tower and forced the submarine to submerge. This was the first encounter of an American ship with a U-boat. The gun which engaged the submarine is on display at Gosport Park, City of Portsmouth, Virginia and forms part of the Naval History and Heritage Command artifact collection. This was one of the three 6” 40 Caliber guns assigned to the Mongolia. This is a multi-faceted artifact, it was the gun used in the first armed action by the United States Navy in World War I; but it also symbolizes the impact of new technologies on the rules of warfare and maritime law. 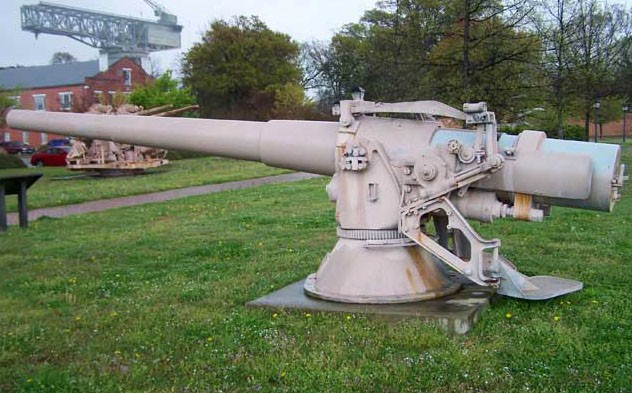 Gun is displayed in Gosport Park, Portsmouth VA and is the gun used in the first armed action by the United States Navy in World War I. Photograph courtesy of Marcus Robbins.

The United States asserted a position of neutrality at the outbreak of World War I. The government and Wilson, in particular, firmly believed in the concept of free trade as a fundamental principle of international maritime law and this included the ability to trade unimpeded with all parties.

There was no legislative body decreeing “international law” at this time, but  rather it was a combination of  “international understandings, treaties and agreements…..arbitration and negotiation had resolved many disputes between the Great Powers, including the United States and other nations, between 1890 and 1910.”    The Declaration of London in 1909 was one such agreement between the major maritime powers.  The declaration included sixty rules on how navies should conduct war at sea, it also defined neutral rights. What constituted rights were fluid and open to interpretation and subject to benign and malignant interference by both belligerents during the war. The closing of the North Sea to neutral shipping by the British in its quasi blockade (Gregory 1971, 55), and the use of Q ships by the British are two such examples of interference.

The development of the submarine  drastically altered the conduct of naval strategy and the rules of engagement.  The rules of cruiser warfare necessitated that an armed ship be stopped and warned prior to  boarding, and sinking. The very nature of the submarine defied application of cruiser rules. Its sole tactical advantage was stealth and this was instantly lost when it had to surface to inspect ships prior to action. Submarines could not spare men for prize crews nor could they take on-board crews of the sunken ship and most importantly surfacing compromised the safety of the submarine. Inexperienced U-Boat commanders and the conflicting orders from the High Command on how to conduct the submarine campaign inevitably lead to mistakes and the attack and sinking of neutral ships and non-combatant allied shipping.

The sinking of the British steamer Arabic was one such example.  The ship had appeared to threaten a submarine by zigzagging and the commander fearing his submarine would be rammed, attacked the ship.

The results of the final restricted submarine campaign were however effective. With a total of about 75 percent of the shipping sunk by gunfire versus 20 percent of shipping sunk without warning using torpedoes. Germany however took a calculated risk when it moved to unrestricted warfare.  The majority of British tonnage was devoted to military material. If the U-boat force was doubled in size then the losses to the British tonnage would also incrementally increase, forcing the capitulation of Britain within six to eight months. The United States could be disregarded and even if they entered the war would not be able to render any significant assistance in this time-frame.

With the declaration of unrestricted warfare against all shipping it was inevitable that the United States would be drawn into the conflict. The loss of American lives and property prompted Wilson’s request for a declaration of war against Germany. 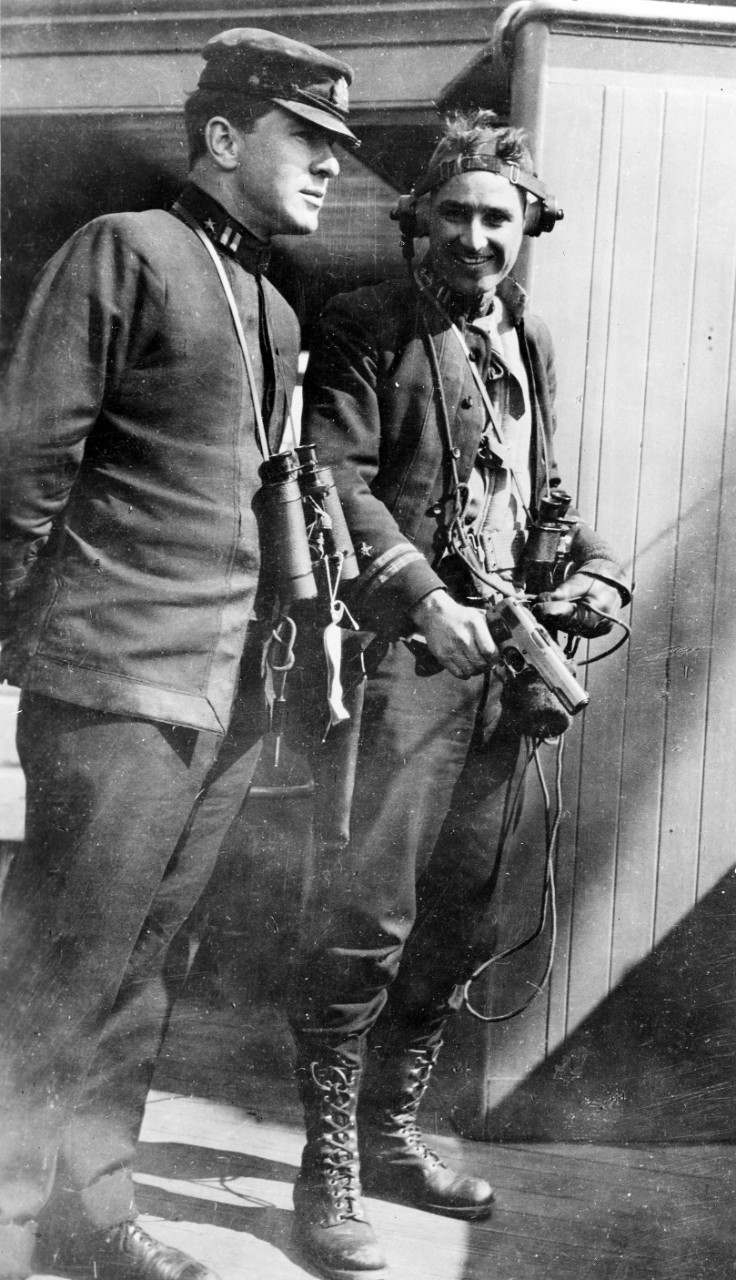 Photograph is from the NHHC Archives Photograph Section. The photograph was taken shortly after the action against the German submarine on April 19th 1917. The officers are shown wearing communication head gear and one has an automatic pistol in his hand.