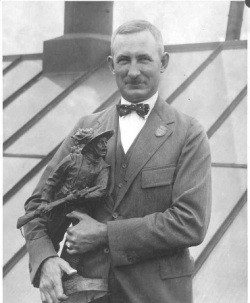 Osburn, an Ohio native, entered the United States Naval Academy in 1903, graduating early in 1906 in response to a chronic shortage of naval officers. His first assignment as midshipman was in USS Rhode Island (BB-17) as she took part in the Atlantic Fleet's world cruise, commonly referred to as the world cruise of the Great White Fleet. During the Wilson presidency, he served aboard the presidential yacht USS Mayflower (PY-1) where he was awarded the Belgian Order of the Cross. He also had command of several US Navy vessels, including USS Schenck (DD-159), USS Dallas (DD-199) and USS Henderson (AP-1) for a total of nineteen years of sea duty. Osburn retired with the rank of Captain in 1939 but was recalled to active duty in 1941 to serve as the War Plans Officer of the 12th Naval District, San Francisco until 19451.

While Osburn's naval career is noteworthy, perhaps his most remarkable accomplishments were in the arena of competitive marksmanship. Osburn's achievements are well documented in the annals of American shooting history where he is known for his superb marksmanship and his successes in both international and national shooting competitions.

Cy Osburn, a tall, reticent man, began his competitive shooting career while at the United States Naval Academy where he was a member of the rifle team, lettering in that sport. The 1907 entry for Osburn in the Lucky Bag, the Naval Academy's yearbook, describes him as being quiet, reflective, and a good listener, "A quiet countryman from Ohio who took a course in agriculture before entering the Academy because he heard that ships ploughed the waves. Once made a speech of ten words, but as his roommate fainted, he hasn't tried it since . . . A sympathetic listener . . . though never known to show much excitement over anything.2" His early shooting prowess is underscored by the sketch of a rifleman that appears next to this entry entitled, "Deadshot Cy, The Jacksonville Wonder."3 The seeds were being sown for a long and illustrious shooting career. According to George B. Harris, Manager, Rifle Department, National Rifle Association of America, "Carl T. (Cy) Osburn is one of the great figures in the history of American marksmanship. Although he shot successfully in domestic high power competition (today called "over the course" competition – at 200, 300 and 600 yards) and long range matches (800, 900 and 1000 yards) his greatest accomplishments were in international 300 meter competition." 4 Over a span of almost twenty years Osburn competed successfully both nationally and internationally. During that time he competed in three Olympic Games winning a total of eleven Olympic medals. Osburn was inducted into the USA Shooting Hall of Fame in 1994 where he is listed as being one of the country's nine greatest marksmen, those people who, according to George Harris, "really left their mark in shooting history, the people who knew how to win and did it consistently." 5

Carl Osburn held the record for the most Olympic medals won by an American for forty-six years until his total was matched by Mark Spitz in 1972, yet his accomplishments and those of other early US Navy Olympic marksmen such as his teammate at the 1920 Olympics in Antwerp, VADM Willis A. Lee, Jr. USN, have all but been forgotten. Competitive shooting has never been a particularly popular sport in the United States as seen in the article entitled Rifle Shooting at the Olympic Games of 1912, by Lieutenant Commander Harris Laning, USN, captain of the 1912 U.S. Olympic Rifle Team. Laning writes, "The press of this country has never taken much interest in rifle shooting, and though the big rifle matches of the country involve an enormous number of competitors, they are rarely even reported by the big newspapers and certainly are never treated as fully as are other competitive sports." 6 This observation is as valid today as it was in 1912.

Captain Osburn’s significant collection of medals, trophies and memorabilia relating to his competitive shooting career was donated to the Naval Historical Foundation in 1967 by his widow, Mrs. Mary Osburn. These artifacts are now in the custody of the Naval History and Heritage Command’s Curatorial Management Branch.