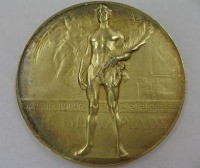 Captain Carl T. Osburn, USN participated in three consecutive Olympic Games winning a total of eleven medals: five gold medals, four silver medals, and two bronze medals, all for rifle shooting events. For forty-eight years, from 1924 to 1972, he held the record for the most medals won by an American in Olympic competition, a record broken by Mark Spitz.

Shooting has a long and illustrious history at the Olympic Games. The introduction of the modern Olympic Games in 1896 by French nobleman Baron Pierre de Coubertin saw the inclusion of shooting competitions at the games. Coubertin, a former French Pistol Champion, supported the inclusion of four pistol and two high-powered rifle events in the Games. Shooting “traditionally attracts the third largest number of participating nations of any sport at the Olympic Games,” and apart from two exceptions, in 1904 in St. Louis and 1928 in Amsterdam, has been part of every Olympic Games.

Carl Osburn, then a lieutenant in the United States Navy began his Olympic career in 1912 at the Stockholm Olympics, where he won the first four of his eventual eleven Olympic medals. Osburn was part of a twelve-man team and participated in military rifle, any-rifle, and miniature rifle competitions, both team and individual. A very interesting and often entertaining account of the trials and tribulations of this team is presented in Rifle Shooting at the Olympic Games of 1912, an article by Lieutenant Commander Harris Laning, USN, captain of the 1912 U.S. Olympic Rifle Team.

In 1912, only military marksmen, with one exception, were considered for the American rifle competition teams because of the costs associated with sending competitors to Europe, and the time needed to physically travel to Stockholm. All military services, including the National Guard, were asked to send six representatives to the tryouts from which a total of eight were chosen for the Olympic team. An additional four were later added to create a twelve-man team. "To make a place on that team meant a great deal to those men, for it at once placed them at the top of the military marksmen of the country and, if the team won in Stockholm at the top of the military marksmen of the whole world." There were three U.S. Navy representatives on the twelve-man Olympic team; Lieutenant Osburn, Hospital Steward W. A. Sprout, and Passed Assistant Surgeon W. M. McDonnel. The team had two weeks to train together at the U.S. Naval Academy range in Annapolis and learn new rules for the games. According to Laning, "not one man connected with the team knew anything at all about the any-rifle shooting (match-rifle), which is highly developed in Europe."

The United States Olympic team traveled to Stockholm aboard the S.S. Finland, a trip that took 16 days. In order to arrive in time for their first competition, the American rifle team disembarked in Antwerp on June 24th and continued on by train, a trip that would prove anything but smooth, arriving in Stockholm on the 26th just two days before the start of the competition. On June 29th, the opening day of the games, and in spite of having little or no time to prepare, the Americans, using the "New Springfield" standard issue military rifle, won the Gold medal in the prestigious International Mens Team Rifle Competition (also known as the Military Rifle Competition). The team shot at 200, 400, 500 and 600 meters. Lieutenant Osburn as part of this six-man team won his first gold medal. Lieutenant Commander Laning commented on his team’s achievements, "This was perhaps the most important military rifle match ever held, as ten of the leading military countries of the world were represented." Taken in context of the world political situation in the early years of the twentieth century, this may well have been the case. The First World War would begin in two years and Europe was on the brink of profound social, cultural and political change. Many of the major countries with key interests in maintaining the balance of power in Europe, and the rest of the world, competed in these games. Teams came from Greece, Russia, South Africa, Germany and Britain to name a few. The United States was a relative newcomer and to win such a prestigious event with its military overtones could be seen as an example of her emergence as an international power.

Lieutenant Osburn competed in both the 300m and 600m individual military rifle matches winning silver in both. Osburn was also part of the 50m small bore rifle team that took a bronze. Laning writes of Osburn, "In these military matches the work of Lieut. C. T. Osburn, of the navy, was remarkable. He not only did his work well in the team match, but in the individual matches he was especially brilliant. . . in the rapid fire match. . . in the shoot-off of the tie in that match he made a score that beat the winning score by two points, he proved to the world his remarkable ability and steadiness. When, on top of that . . . he tied for first place in the long-range slow-fire match, he proved his right to the title of the best all-around military marksman in the world."