Karl Goetz’s medals are a visual cacophony of images designed to provoke social commentary and ridicule their subjects. Images of skeletons, emaciated people, buzzards, caricatures of President Wilson and other influential persons and harsh subject titles confront the viewer of the medals.

Goetz produced 633 medals on a variety of subjects of which 175 were of a satirical nature. The Naval History and Heritage Command (Curator Branch) has seven of these satirical medals in its collection.

NHHC’s satirical medals can be divided into two groups as outlined by Gunter Kienast in his book The Medals of Karl Goetz: the World War I series (1914-1918) and the Revolution and Occupation of the Rhine and Ruhr (1919-1923) series. The use of the term satirical would suggest that the medals are similar to such magazines as Punch. Goetz does indeed use irony, sarcasm, and ridicule to expose, denounce and deride vice and folly, but in this case it is the vice and folly of the Allied governments and politicians. Goetz manufactured the medals and sold them to the public where they were viewed among collectors similarly to the tradition of collecting baseballs cards. Is this propaganda? Was Goetz trying to deliberately cause harm in the production of the medals?

Goetz was not part of an organized national propaganda effort; instead he used his artistic skill to provide social commentary on the events enveloping Germany and himself. Mark Jones in his booklet, The Dance of Death, Medallic Art of the First World War, notes that one of the features of the medals produced in Germany in this period were, “.…the use of the medal[s] to provide instant political comment and to express the artist’s feelings, in this case hatred and contempt, for his subject.” [referring to Goetz]

Jones’s analysis looks at the divergent artistic styles between French medals of this period produced in the Art Nouveau style and the German medals, such as Goetz’s. Referring to German medal production he states, “They also include the use of awkward, angular forms and of dramatic and imaginative legends to convey them.” These artistic choices reflect the political feelings of the artist as well as a break with the stylistic norm of the day.

Jones comments that the break with stylistic tradition is not an individual choice but rather a reflection of, “the feeling common among Germans at that time that their country had rejected and had been rejected by international society.”

In comparison, “French medals remained true to the elegant refinement of the pre-war tradition that had been common to all European medalists.” Naval History and Heritage Command has three French Exposition Medals from 1900 in the collection.

These bronze medals were designed by Jules Clement Chaplain who worked in the art nouveau style and reflect the “elegant refinement” described by Jones. 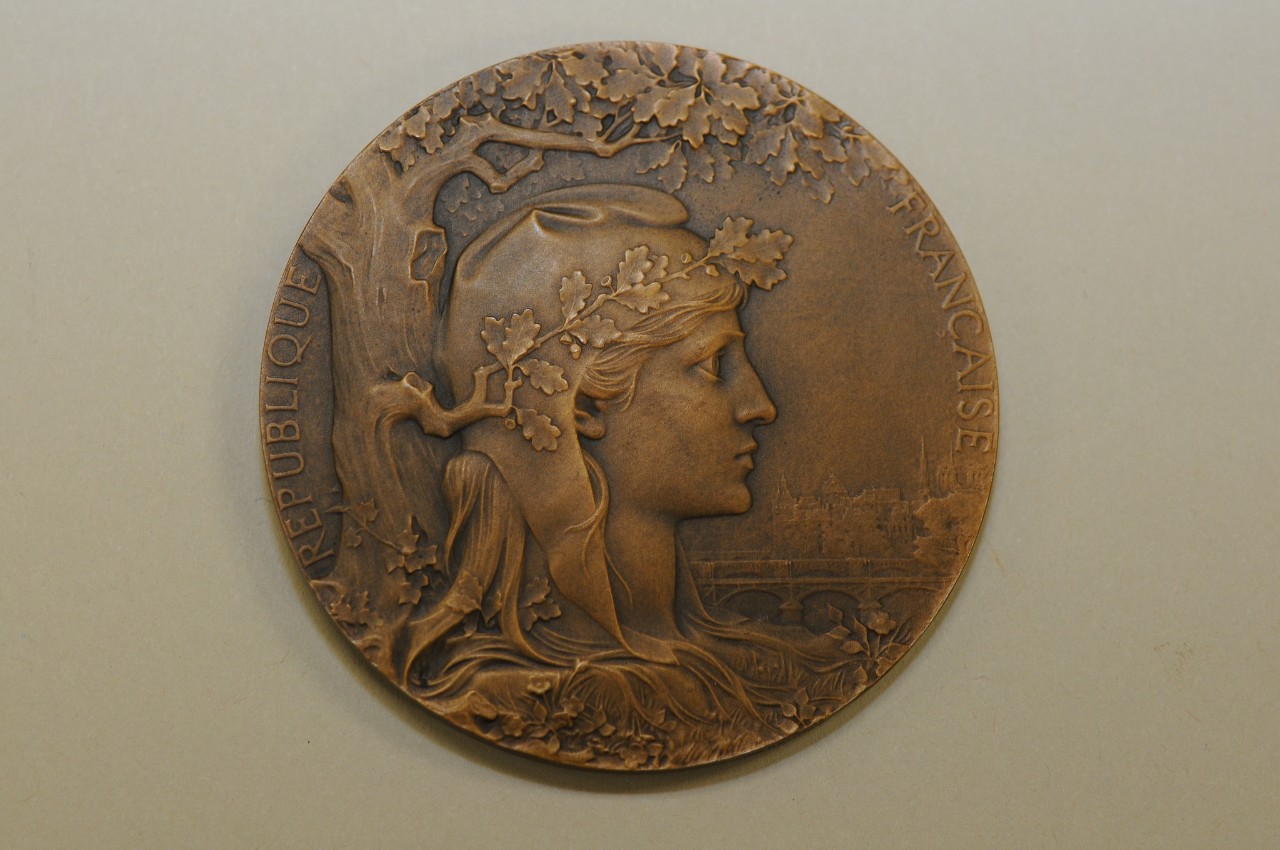 An example of this French style medal has the bas relief of Marianne at the center with the Paris skyline to the right. Marianne is the personification of the French Republic wearing a Phrygian cap; she embodies the ideals of liberty equality and freedom. Marianne is surrounded by the leaves of an oak tree; organic motifs are commonly found in art nouveau design. 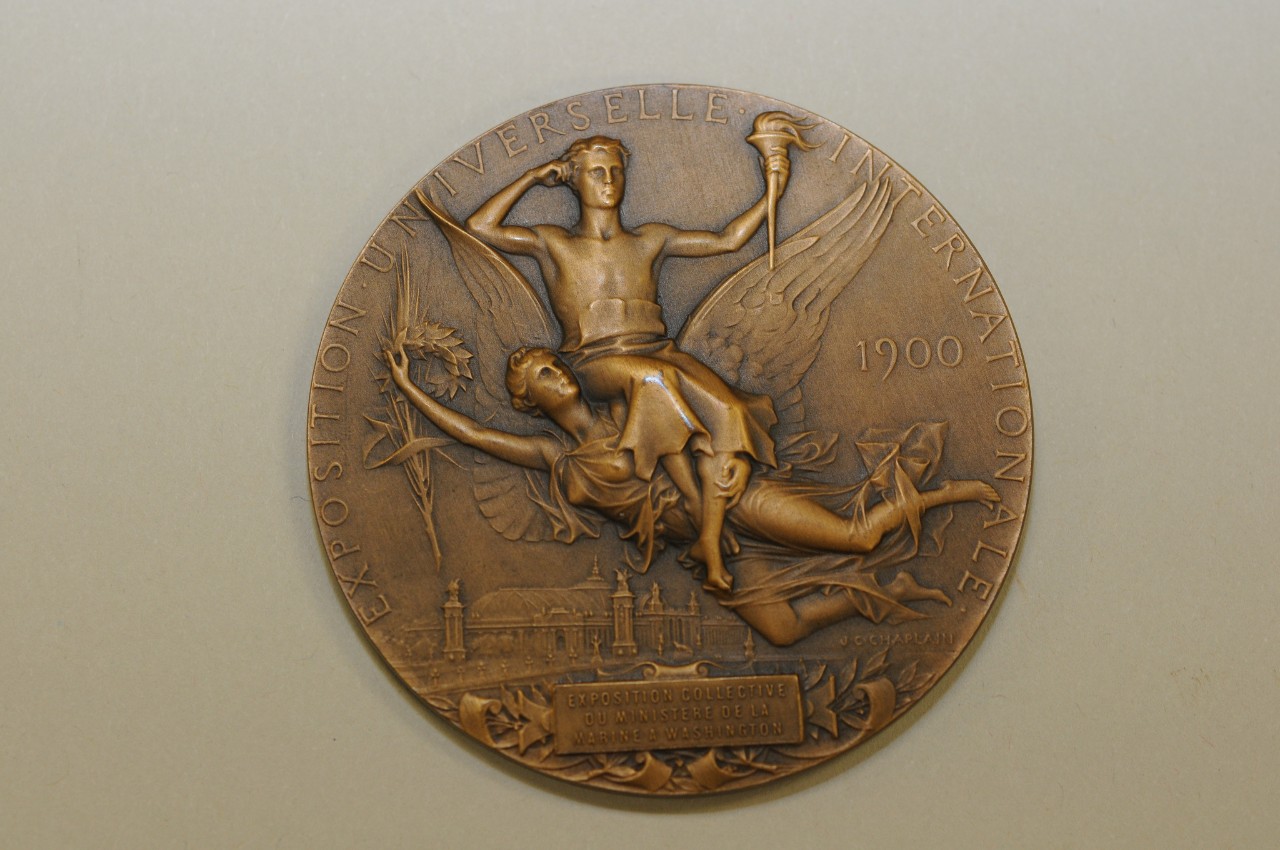 The reverse of the medal shows Victory flying over the exhibition supporting a prize winner. This particular medal was awarded to the Department of Navy for their collective exhibits at the Exposition.

Goetz’s satirical German medals are a visual juxtaposition to the refined and optimistic French medals. His most infamous medal, Lusitania, reflects the nihilistic style of medals from this period and represents German feelings of resentment during and following World War I.

The medals were “inspired by newspaper reports,” and created by Goetz from accounts he read. Gunter Kienast, reflects that this is the source of discrepancies in the medals, in particular the incorrect date on the infamous Lusitania Medal. 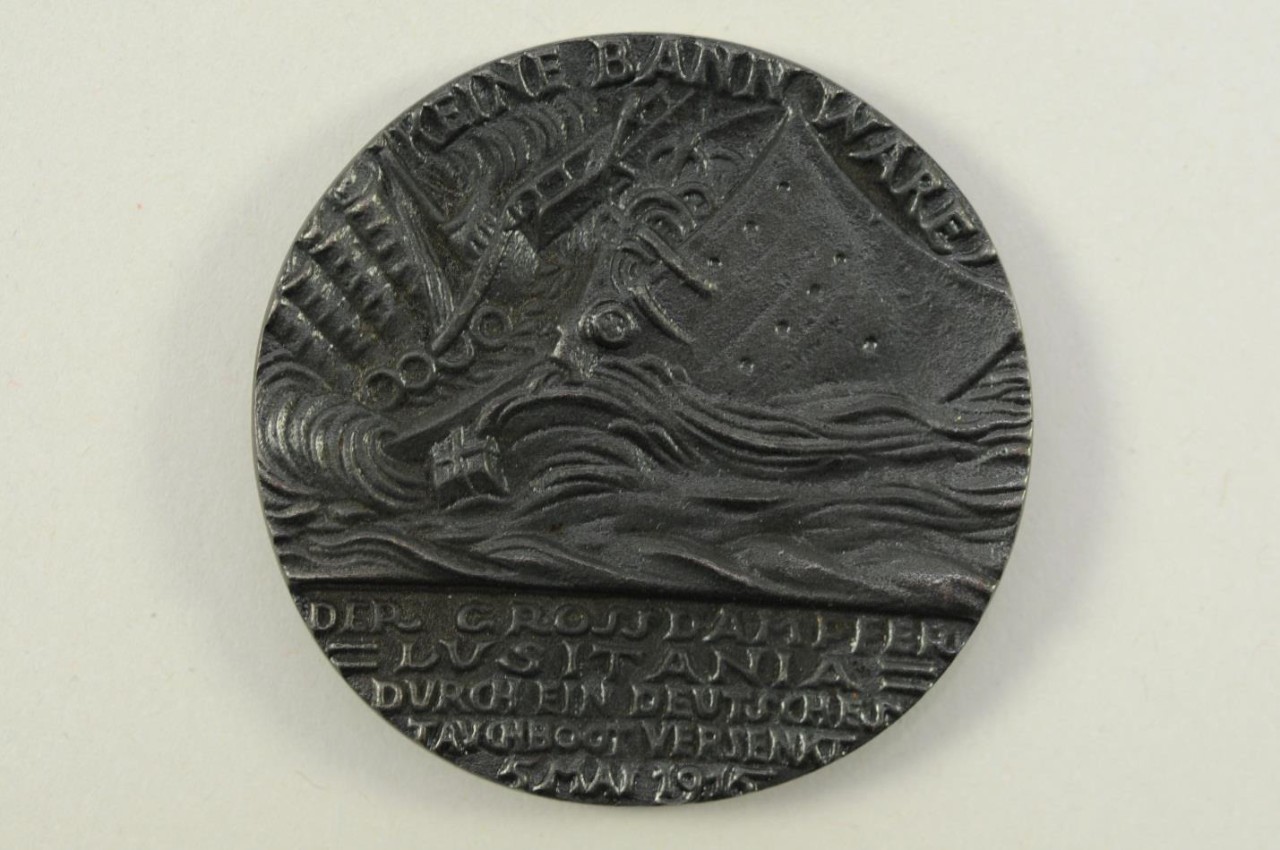 Goetz’s Opus 156, The Sinking of the Lusitania, was produced to castigate the business sense of the Cunard Line. Goetz wrote on the subject of his controversial medal on numerous occasions. In a letter to Dr. C. A. Schenck, Manager of the American Service Committee in Frankfurt, dated July 24 1921 Goetz states; “…..for myself the Lusitania case was not an event for triumph, but for censure of the Cunard Line for gross neglect. Only this my medal wanted to show…”

Obverse of the medal is inscribed; “No Contraband,” the exergue is inscribed “The liner Lusitania sunk by a German Submarine May 5 1915.”

Goetz’s medal was cast with a date of Mai 5 [May] 1915 when the ship was sunk on May 7. This inconsistency was used as evidence by the British authorities that the Germans had planned the sinking in Berlin.

The Lusitania medal in the Naval History and Heritage Command’s collection is a British reproduction medal as indicated by the “May 5th” date. It was produced at the time of the sinking and used for propaganda purposes to vilify the German authorities. According to Kienast 250,000 copies were sold to raise money for the British charities; the Red Cross and St. Dunstan’s.

The interior of the box which accompanies the medal reads, “This indicates the true feeling the War Lords endeavor to stimulate, and is proof positive that such

crimes are not merely viewed favorably, but are given every encouragement in the land of Kultur.” 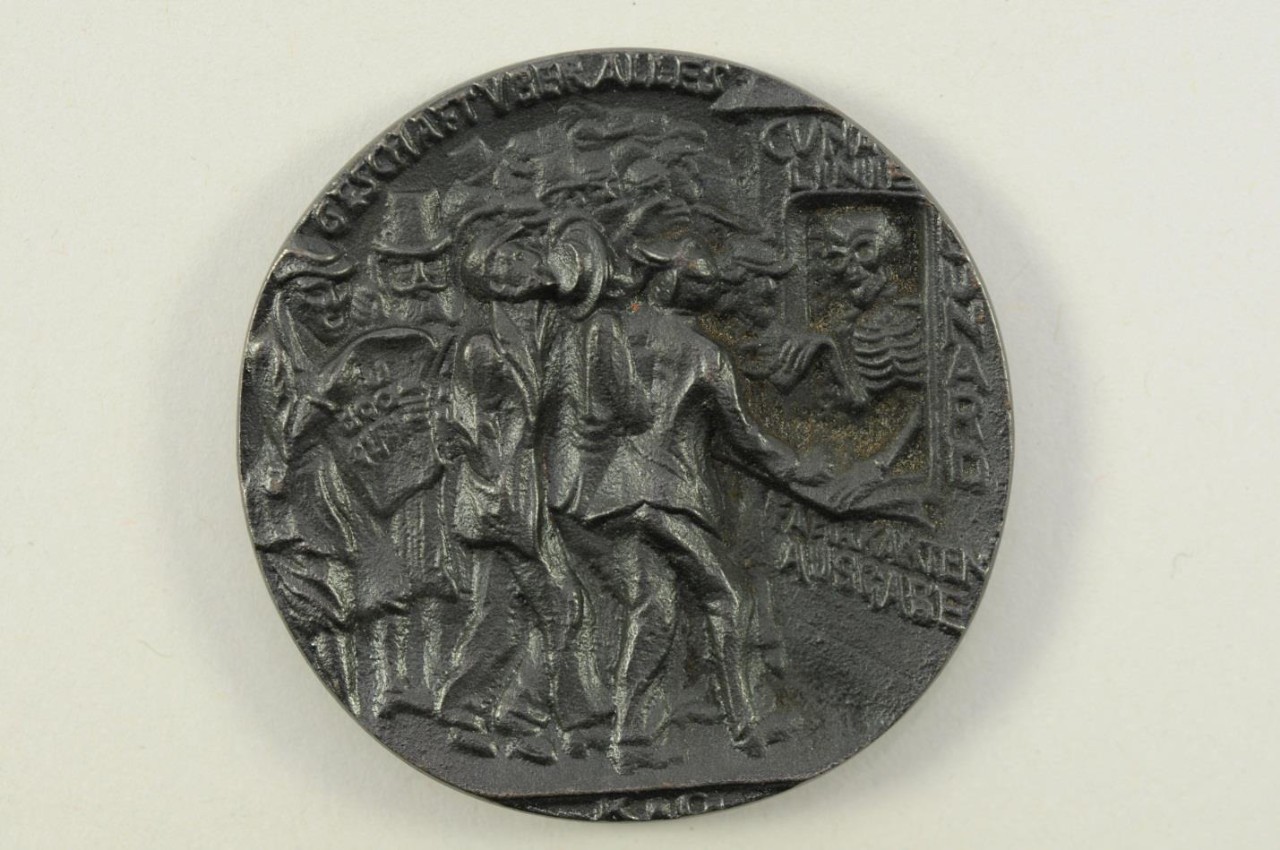 The reverse of the medal depicts a skeleton behind a Cunard ticket counter and is inscribed, “Business above all.” 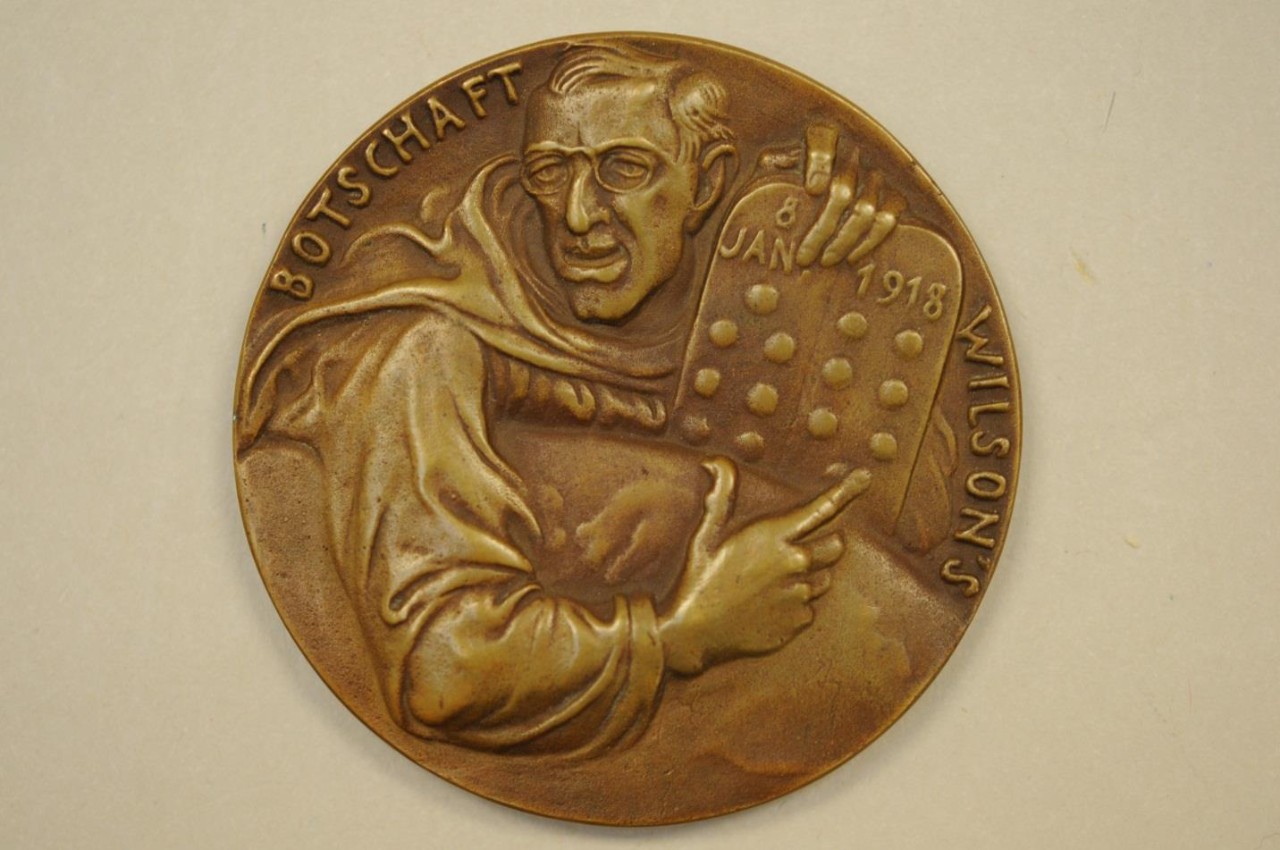 In Opus 203, “America’s Peace Terms,” Goetz comments on the occasion of President Woodrow Wilson’s fourteen point’s speech to Congress. Wilson was trying to facilitate a “just and secure peace” for all parties involved in the conflict and this medal reflects the optimism felt by the German people and Goetz. 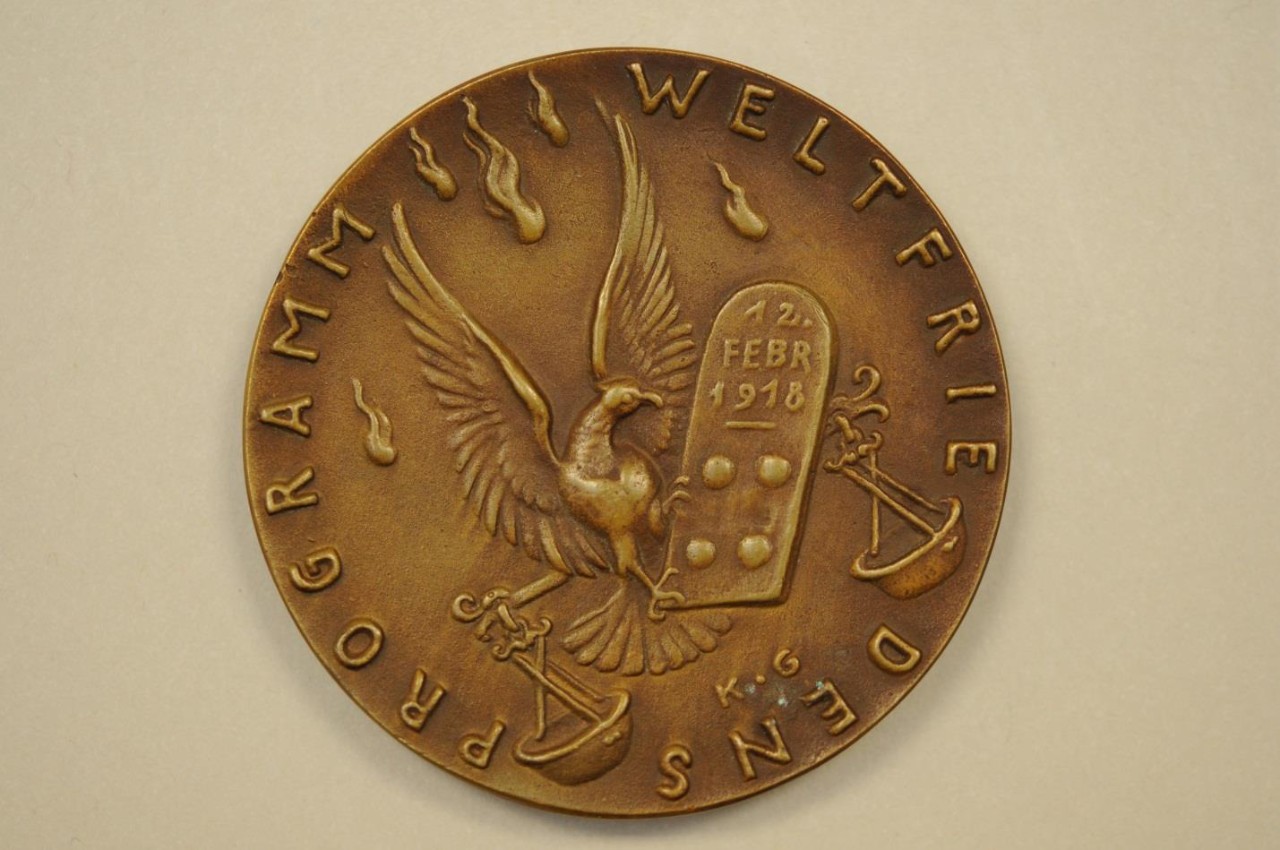 The reverse is inscribed, “Program of World Peace.” “The four points on the board are symbolic for the four supplementary points as declared by Wilson on February 12, 1918.” 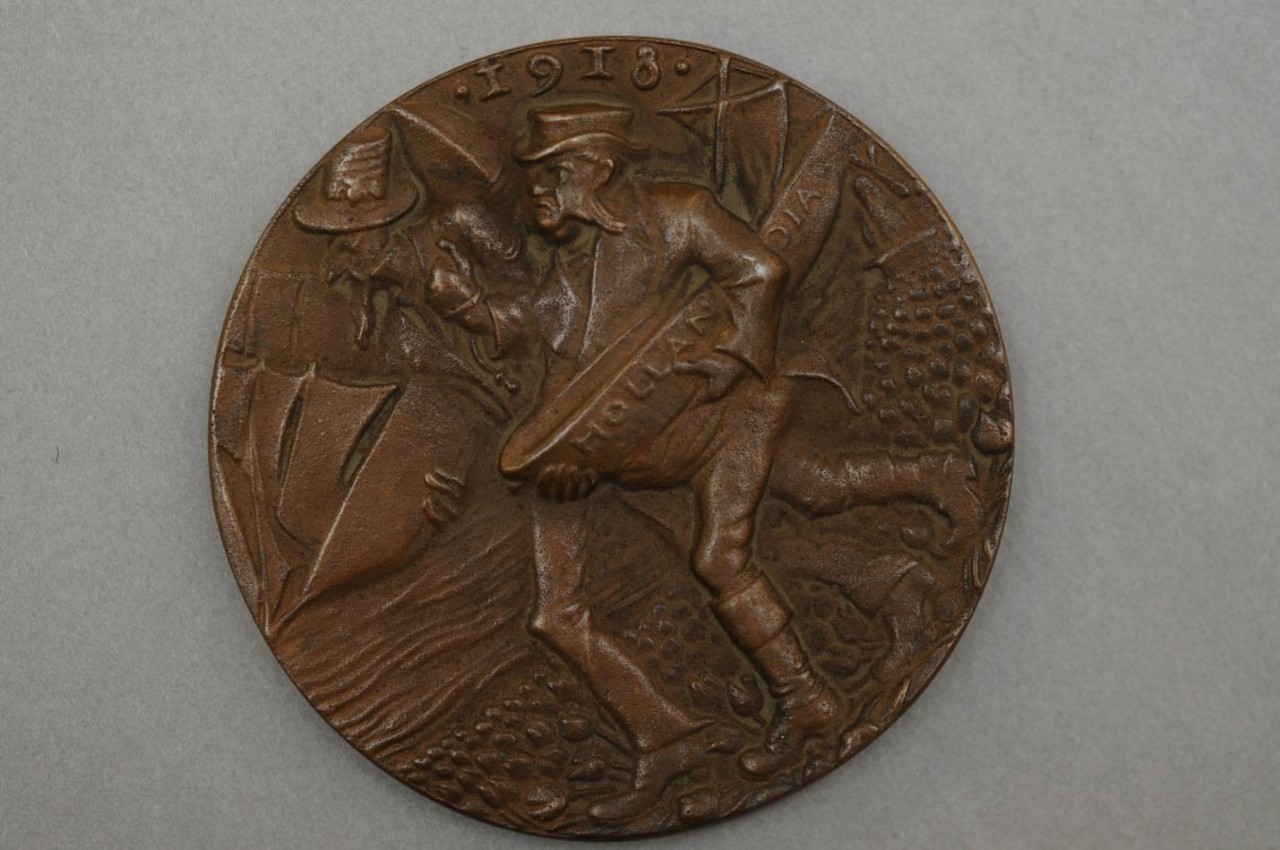 In Opus 210, “Shortage of Shipping Tonnage,” Goetz comments on the occasion of the appropriation of Dutch ships by the United States in March 1918. Here we see Uncle Sam and John Bull walking away with ships in their arms. 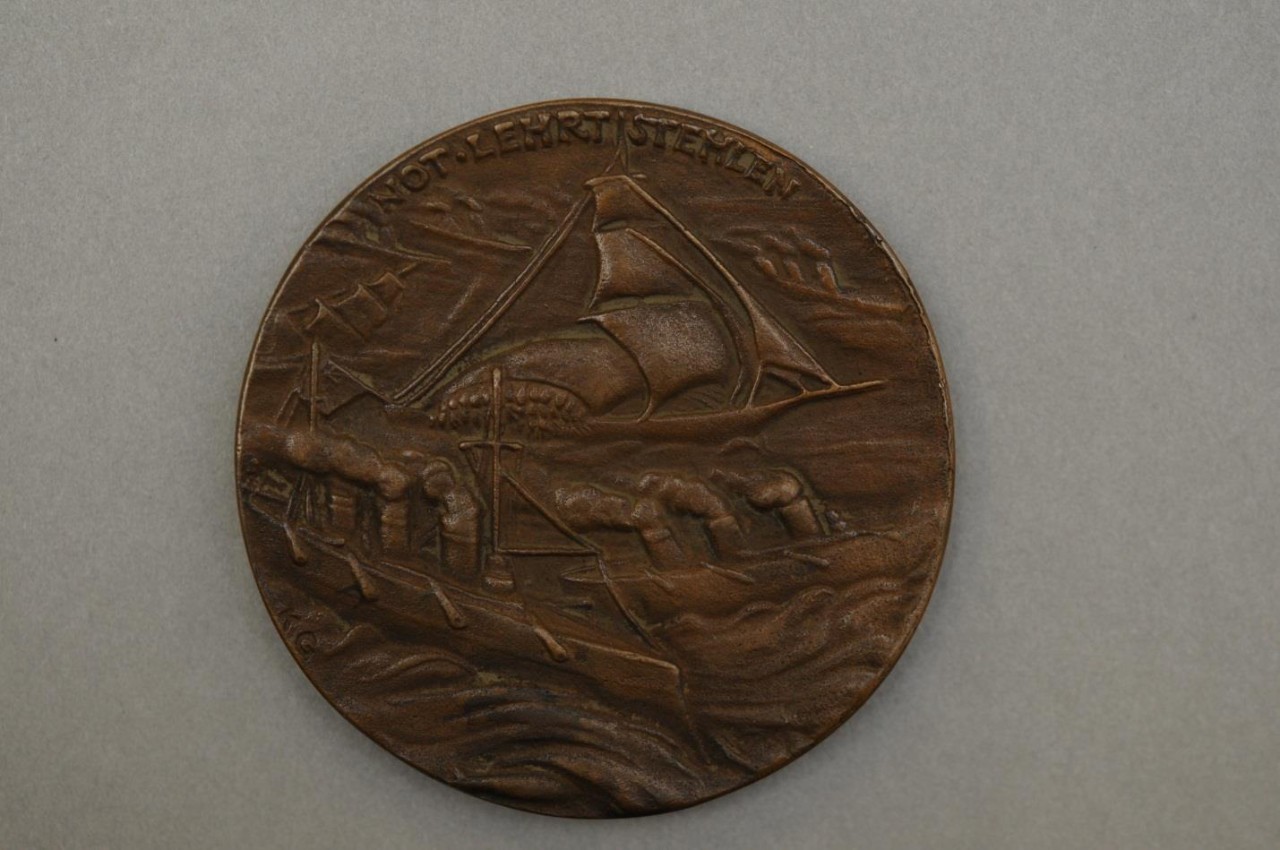 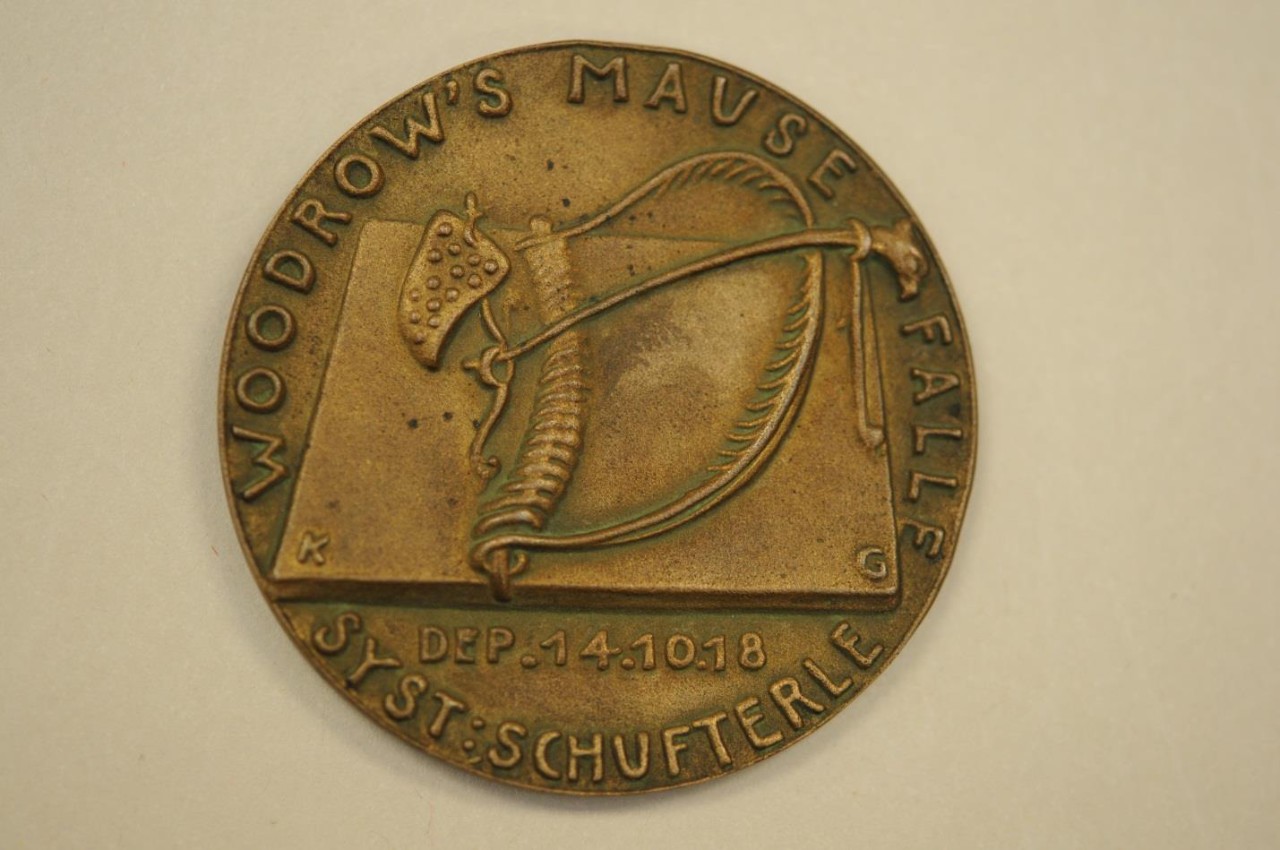 Opus 227, “Woodrow’s Mousetrap” depicts Goetz’s criticism Wilson and the American government. The obverse depicts a giant mousetrap; reflecting the popular perception that the Germans’ were trapped by relying on Wilson’s fourteen points.     The phrase, “System Scoundrel”, System Schufterle reflects Goetz’s sense of betrayal. It was a popular perception [untrue] that, “Lundendorff and other German generals of World War I, claimed that they had been lured into an armistice in November 1918, by the promises of Woodrow Wilson and his Fourteen Points. 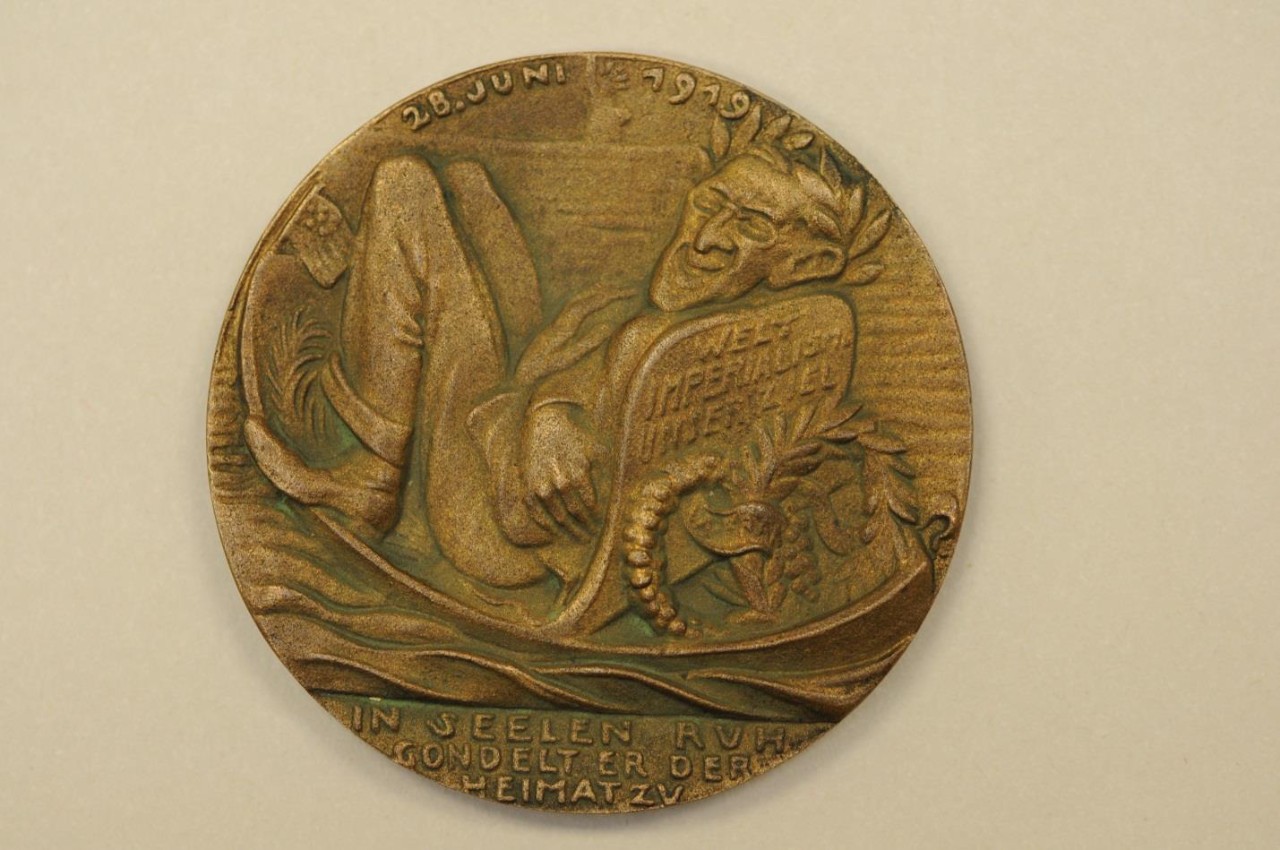 The reverse is inscribed, “June 28, 1919, he is sailing home in much tranquility, [inscription on the back of Wilson’s seat] World imperialism is our goal” 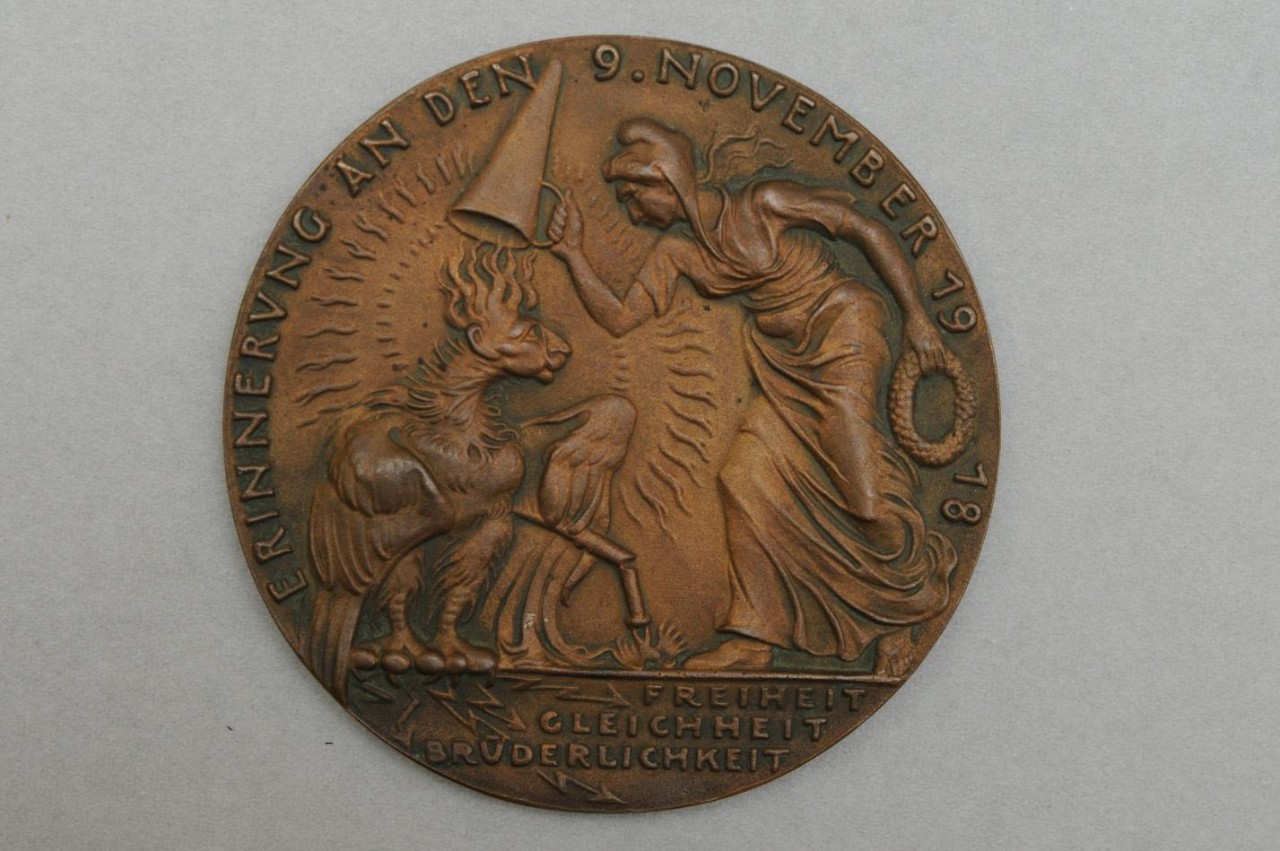 In Opus 218 Goetz is commenting on the abdication of the Kaiser, the renunciation of the throne by the Crown Prince, and the formation of the Weimar Republic. The young woman representing the new Republic helps to extinguish the fire in the House of Hohenzollern. The obverse is inscribed, “In memory of 9 November 1918.” 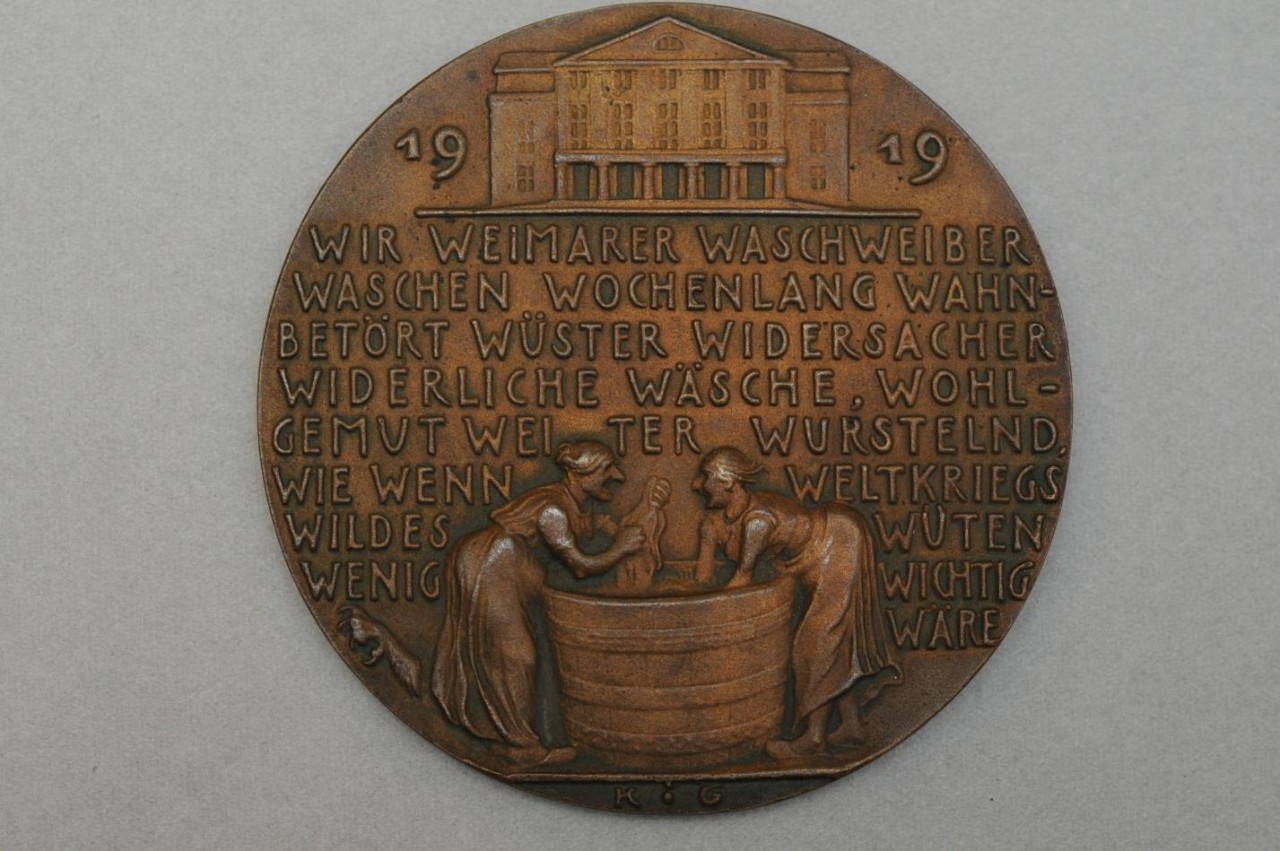 The reverse is inscribed, “We washer-women of Weimar are washing for weeks the repugnant laundry of insane, wild antagonists, but keeping it up in good spirits as if World War’s raging was of little importance.” In the background is the German National Assembly. 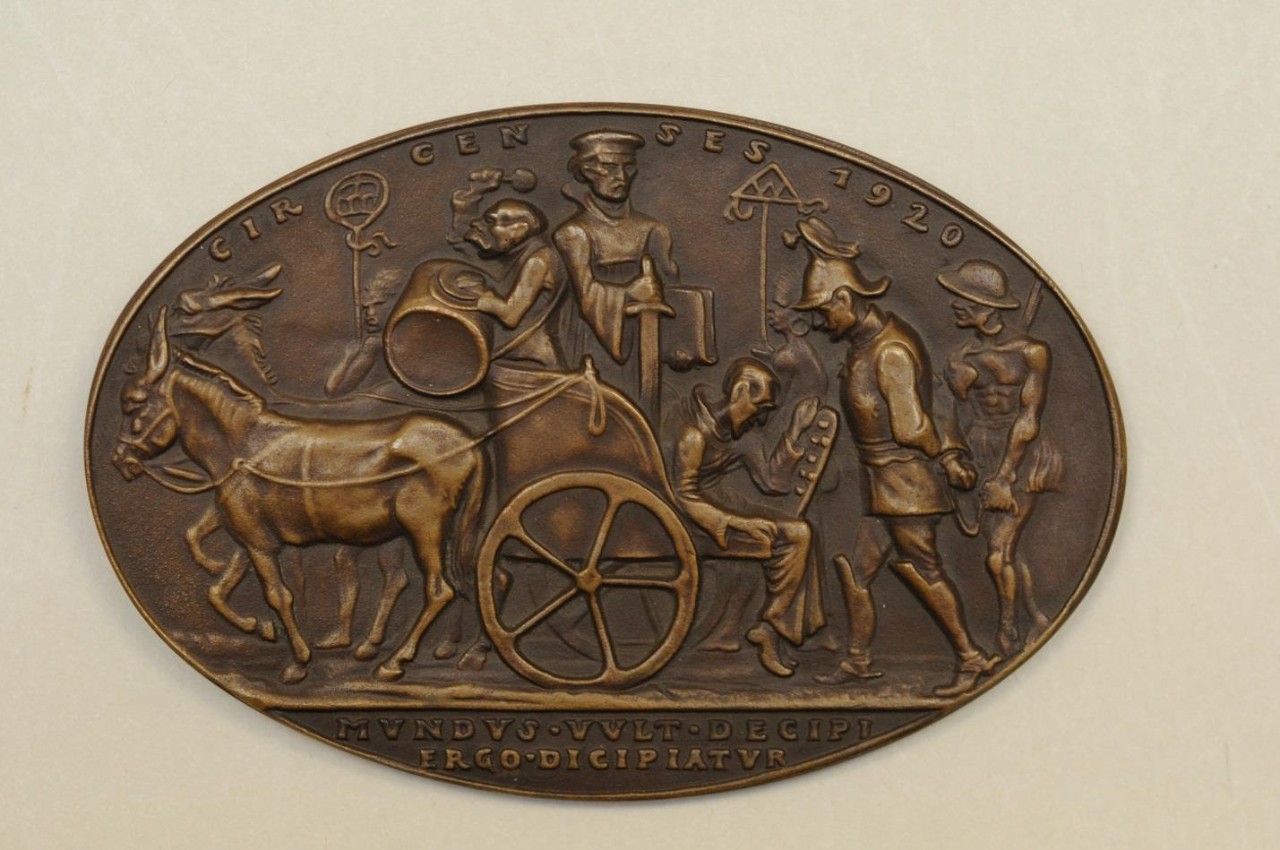 In Opus 231, “The Circus Games,” Goetz “criticizes the clause in the Versailles Peace Treaty which demanded the trial of the former Kaiser and the extradition of German Generals accused of violations of the laws and customs of war.”18 The obverse is inscribed, “The Circus Games 1920.” The exergue is inscribed “The world wants to be deceived, so let it be fooled.” The medal is a parody of a Roman Triumph. The obverse depicts captured German officers under guard following a mule drawn chariot holding allied national leaders. 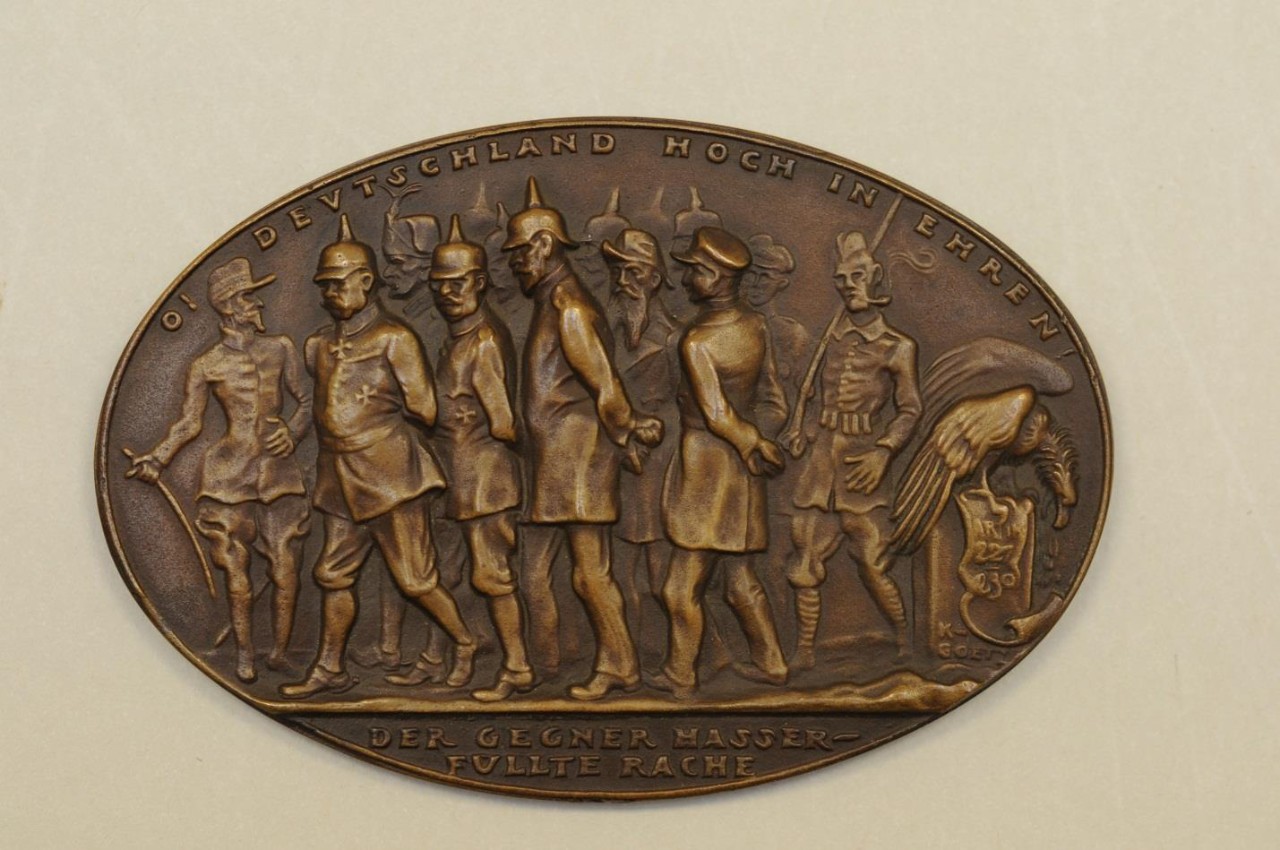 The reverse is inscribed, “O Germany High in Honor” with the inscription in the exergue, “The enemies’ hateful revenge.” 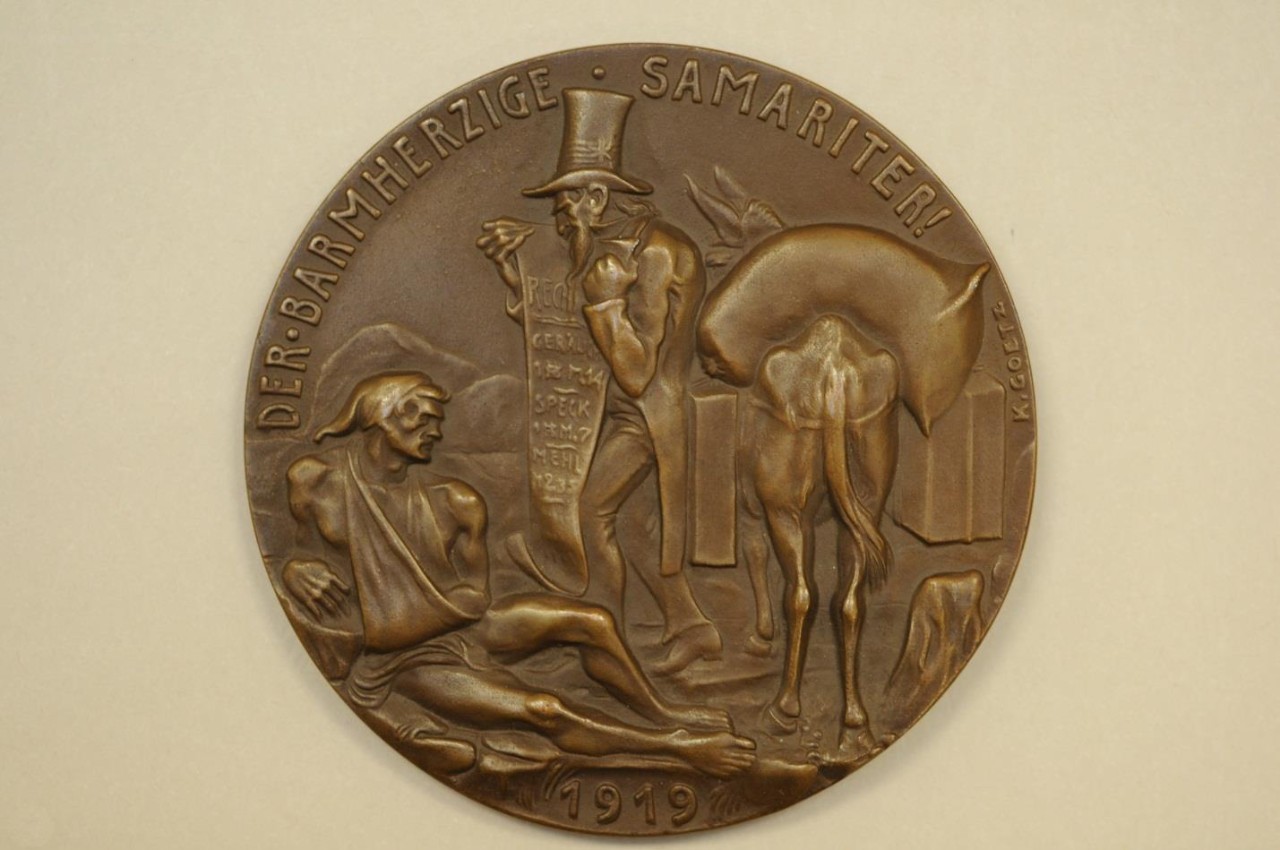 With Opus 229, “The Good Samaritan” Goetz comments on the lifting of the trade blockade on Germany on July 12, 1919 enacted by the Allied forces in particular the British Forces. Germany was subjected to blockades even after the Armistice was signed and the blockade was not lifted until Germany signed the Treaty of Versailles on June 28, 1919. The continuation of the blockade caused the civilian population additional hardships in the post war period.  The obverse is inscribed, “The Good Samaritan 1919.” Here we can see Uncle Sam with a list of supplies and a fully laden donkey addressing a sick man at the roadside. 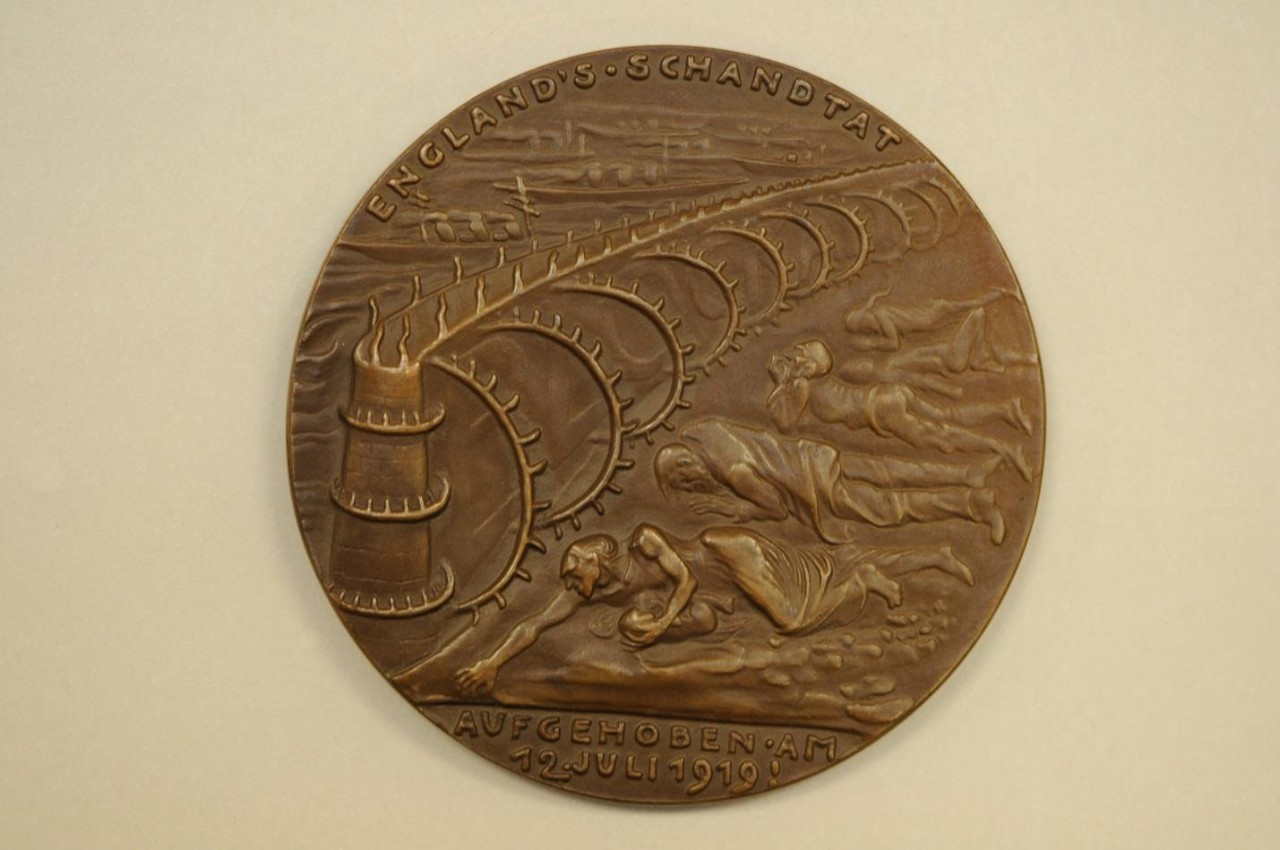 This is in contrast to the reverse which is inscribed, “England’s deed of shame.” The exergus is inscribed, “Lifted on July 12, 1919.” The medal depicts starving people scrabbling on the ground for food, waiting to be plowed under by the British.

NHHC’s collection of satirical medals provides a fascinating insight into the social and political culture in Germany during World War I and its aftermath. Goetz highlights topics which were prescient to him and to citizens of Germany. The medals are fascinating as art works, but they are also an enduring legacy, that highlights some of the less well known historical events in World War I.

The medals provide vibrant social commentary on the war and serve to remind the viewer of the toil and sacrifice World War I exacted not only on the allied and axis forces, but also on regular citizens.

The Dance of Death, Medallic Art of the First World War, by Mark Jones, The Trustees of The British Museum, Billings & Sons Ltd London 1979, p1.