Escape From the Pentagon: NSWC Crane Group on 9/11 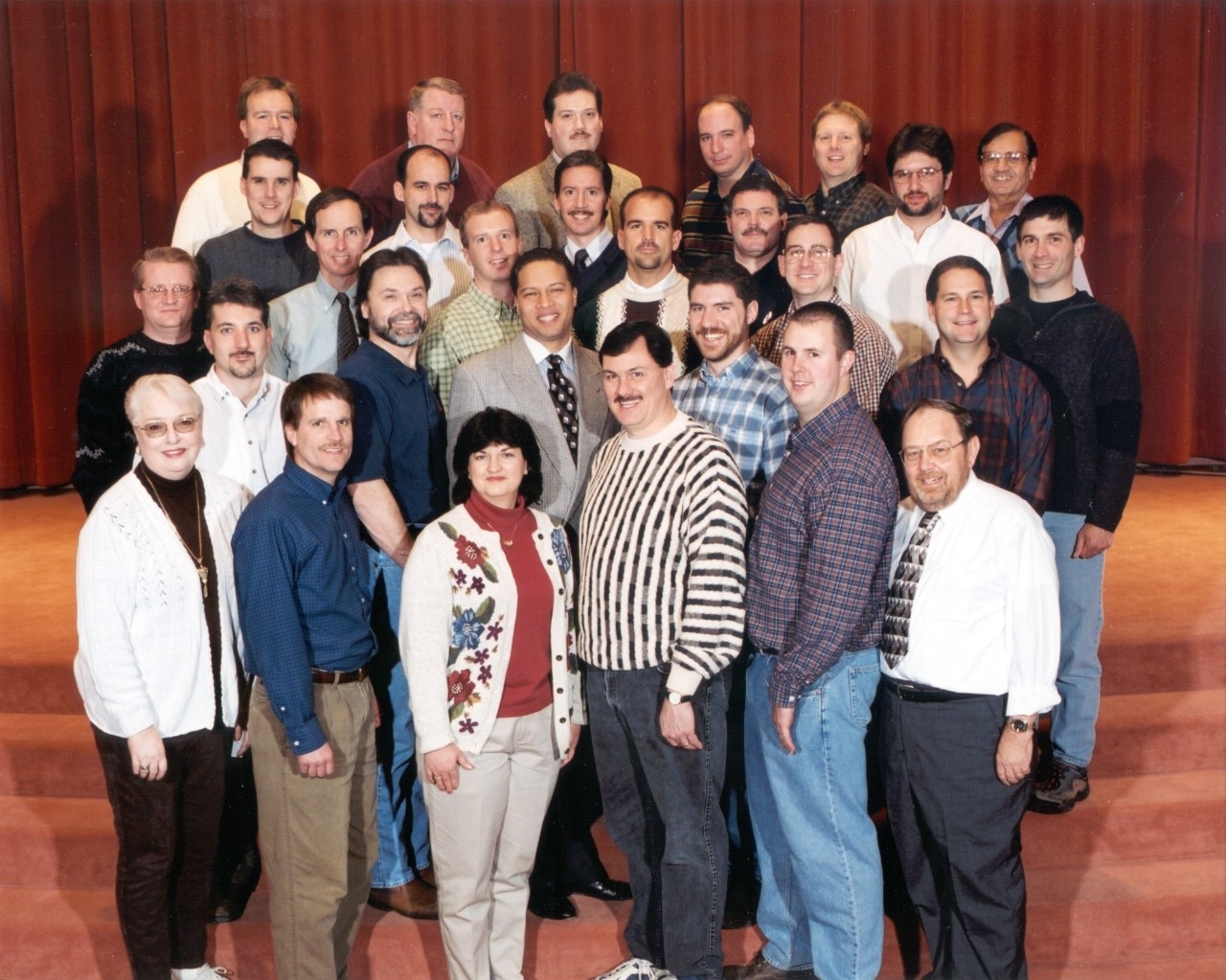 For millions of Americans, 11 September 2001, began as any other day. For those on the East Coast, the morning dawned with few clouds and bright sunshine. After enjoying their morning coffee and breakfast, the rush out of the house began only after kissing their significant others and school-bound children goodbye, with thousands starting the routine commute to work. By the end of this deceptively normal morning, the routine, commute, and life itself would never seem the same again.

Thirty Navy civilian employees from Naval Surface Warfare Center (NSWC) Crane Group, Indiana, had arrived in the nation’s capital just two days prior to 11 September to take part in a weeklong industrial management course. The group spent the morning of the 10th sitting through three separate lectures. Several of the Crane Group members looked forward to visiting the Pentagon the next day for a talk from Susan Livingstone, the first acting female Undersecretary of the Navy.[1] 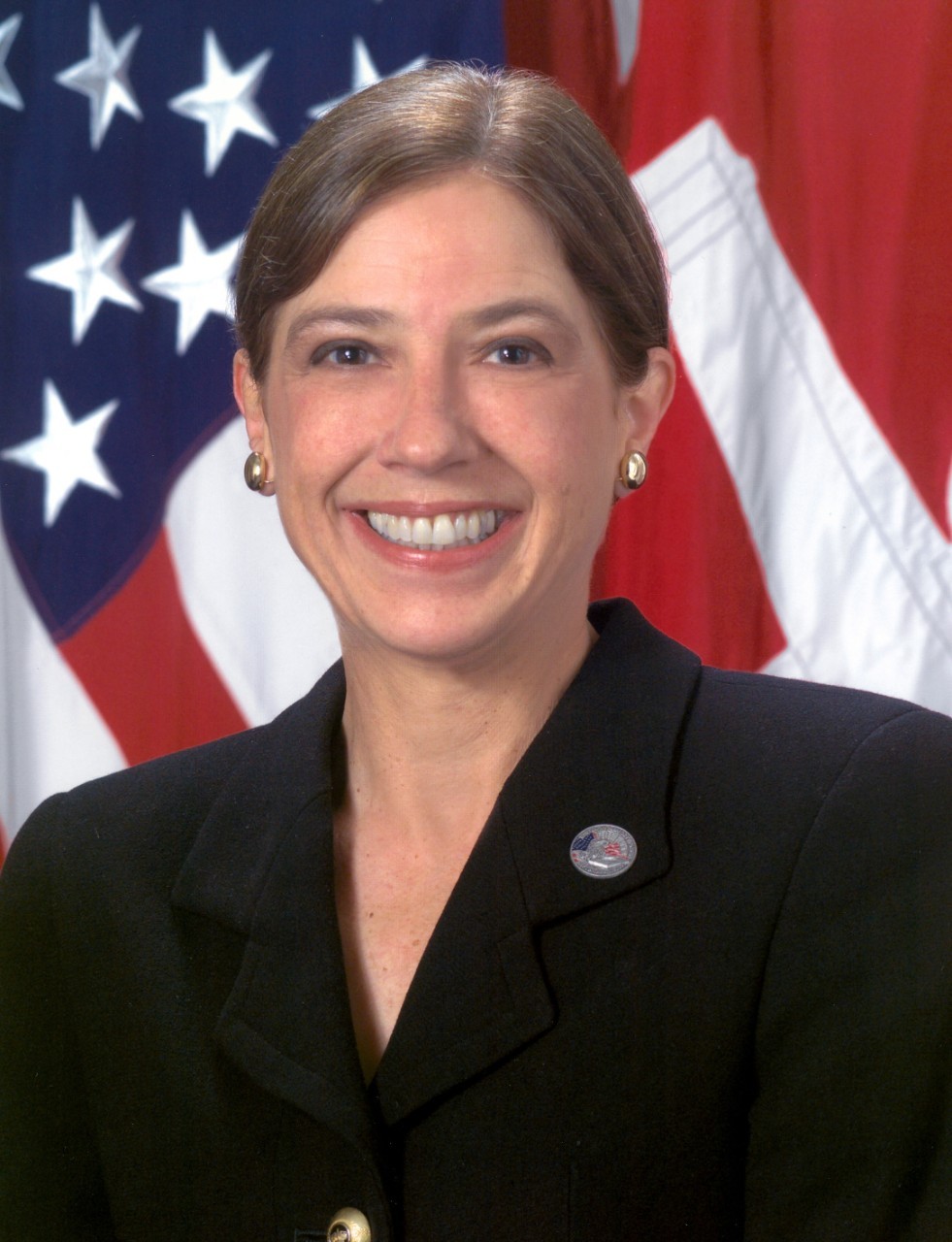 Susan Livingstone, the first acting female Undersecretary of the Navy, was speaking to the Naval Surface Warfare Center (NSWC) Crane Group from Indiana when Flight 77, hijacked by terrorists, struck the Pentagon on 11 September 2001.

Due to some difficulties in transportation from the hotel to the Pentagon, the group was late for their 0900 briefing in room 5E490 with Undersecretary Livingstone. After finally arriving to their conference room on the fifth floor some five minutes later, Undersecretary Livingstone’s executive assistant, Captain Dennis Kern, informed the class that aircraft had struck the World Trade Center buildings in New York City. After hearing about the terrorist attacks for the first time that morning, engineer Richard D. Marshall, Jr., remembers thinking that the Pentagon “could be a prime target as well.”[2]

Despite the concern about events in Manhattan, Undersecretary Livingstone opened the class with some remarks about budget cuts and the effect on certain groups within the Navy. With another speech scheduled at 1000, Captain Kern began giving Livingston “the high sign” to conclude her remarks.[3] Wanting to take at least one or two questions from the class, she was a few words into her first response when at 0932, American Airlines Flight 77, hijacked by five members of al-Qaeda, struck the west side of the Pentagon, directly below and slightly to the left of the conference room the group was in.

The members of the Crane Group felt the building lurch as if shaken by a violent earthquake. Captain Kern recalled a “very loud explosion” that “rocked the room.” Undersecretary Livingstone exclaimed, “There has been a terrorist event… And we need to evacuate and get out of here.”[4] Light fixtures fell to the floor while ceiling tiles dropped into the corridor. To make matters worse, black smoke began filling the room, making it difficult for everyone to see and breathe. With none of the offices having windows facing the outside of the building, it was difficult to discern what had happened. JoAnn Moubray, a supply systems analyst with the Supply Directorate of the Crane Group noticed that smoke immediately “came out of the light fixtures.”[5] She also recalled being one of the first out of the conference room, following just behind Secretary Livingstone. With the conference room filling with smoke, the class members stepped out into the hallway. Within ten seconds, all were out but instantly became confused as to which direction to go. Somebody in the group checked the stairwell and upon seeing only the first two stairs, alerted everyone else that there did not seem to be any stairs to climb down. Several people in the group wondered if the stairs and the hallway leading away from the room were the only two ways off the fifth floor. With plumes of smoke rapidly entering the hall, there did not seem to be an exit in that direction (in fact, the hallway leading to the conference room from the stairs led to a dead-end wall). All of the class members began covering their mouths and noses with coats and handkerchiefs to protect themselves from the effects of smoke inhalation.

At that moment, several Pentagon employees began entering the hallway from the offices on the fifth floor, most of whom were visibly upset. After Undersecretary Livingstone managed to calm them, she began walking uneasily down the smoke-filled hallway with Captain Kerns in the lead. Kerns knew the layout of the E Ring better than the class members did and made sure they were right behind him. As the group began following Captain Kerns, a female voice suddenly told the others to watch their step and each person carefully had to step down nearly two feet. The dropdown was the result of floors 1, 2, and 3 buckling from the impact of the plane. Captain Kerns realized the only way to get out was forward down the darkened hallway and into corridor 4, recalling there was a construction wall that blocked the way behind them. As soon as the members turned into the corridor, they all noticed it was pitch black.

Captain Dennis Kerns recalled the group made a perilous, and mostly blind, exodus down Corridor 4. Telling everyone to get down on the floor to avoid the deadly smoke, the group began crawling on all fours close to the right hand side of the corridor. Captain Kerns understood the fire was raging in the floors below them due to the heat emanating off the floor and walls. Leading from the front, and unable to see if any possible dangers before him, he ran his right hand along the wall while he held onto Undersecretary Livingstone just behind him with his left. With each person, “grasping the hand of the person behind them,” the group moved “in a daisy chain type” of formation down the hall.[6] As he led the Crane Group members, a voice down the hallway suddenly began providing support. Some of the members pressed the voice to continue speaking, in order for them to follow the sound and get closer to safety. If the helpful voice suddenly became quiet, even for a few seconds, people in the group would again ask the person to keep speaking. The voice became a beacon of hope and calm to the disoriented group. The class could not definitively establish to whom the voice belonged.[7]

Despite the panic that individuals may have felt within themselves, the class proceeded down the corridor calmly, working together while helping and encouraging one another. As the thick acrid smoke began to burn their throats, several members of the class began to wonder if they would make it out of the Pentagon alive. Others thought only of their families and moving forward as much as possible with a fervent desire to survive. Nearly all of those later interviewed remarked on how incredibly at peace everyone seemed. Jim Buher, the coordinator of logistical support for the Crane Group class, recalled how he became, “totally amazed and impressed by how calm everyone stayed through the entire process. I never saw a hint of anyone panicking.”[8] 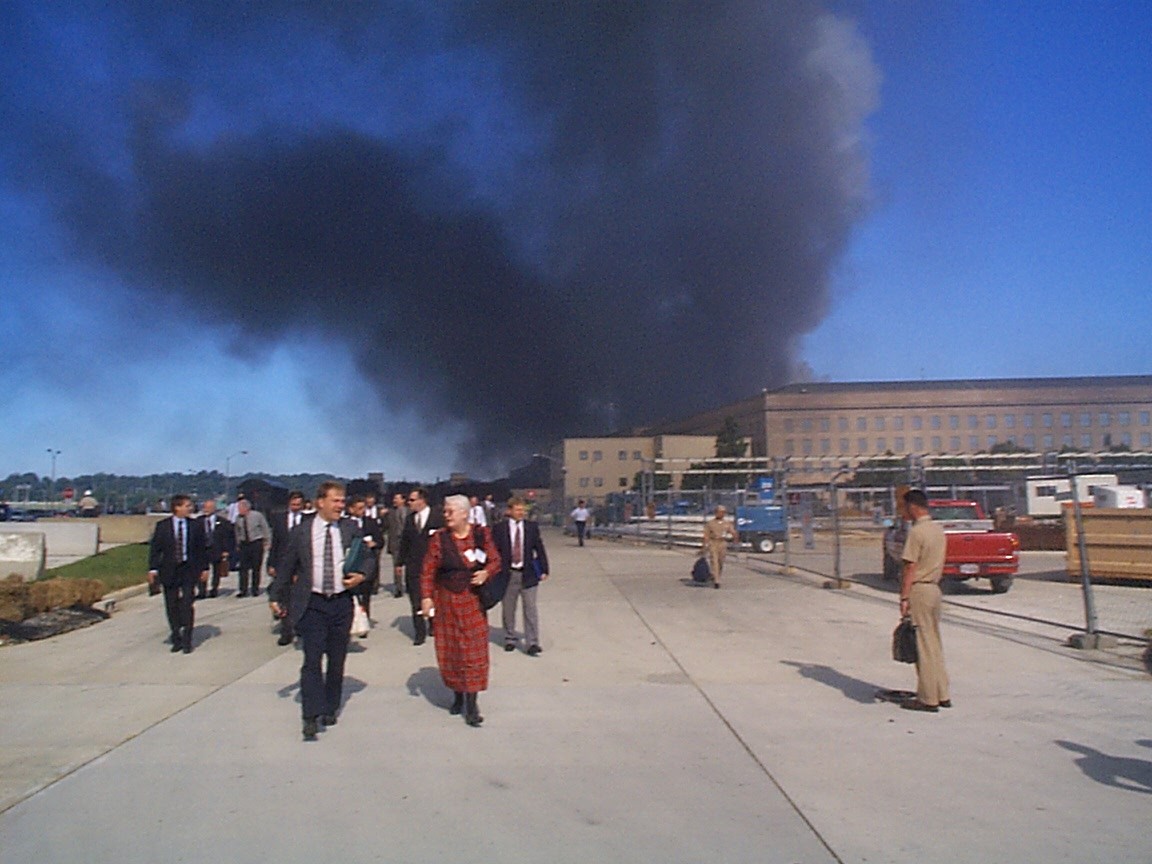 The aftermath of the terrorist attack on the Pentagon, 11 September 2001.

After what must have seemed an eternity, the class “finally got where the smoke started thinning down,” recalled JoAnn Moubray, “It was almost a miracle.” Hearing a male voice suddenly exclaim, “Run!” she began to move quickly towards three stationary escalators towards the Metro exit. A friend later asked if she thought the voice was a real person or an angel. She replied, “I didn’t care what it was, it was an angel to me.”[9] As the class at last made its way out of the Pentagon, Undersecretary Livingstone recalled the building’s security officers encouraging survivors to go into the Pentagon’s large courtyard. After what the group had just been through, she felt, “That seemed to me to be the last place in the world you’d want to be if there was unknown further attacks that were going to occur.”[10] Instead, the class made their way out to the Metro Concourse, then on to the south entrance and into the South Parking area. Finally, after conducting a headcount, every member of the Crane Group was accounted for. Only when the group felt relatively safe and gathered with other survivors did they learn what had happened. While most of them originally believed the Pentagon had suffered a terrorist bomb attack, they learned from several other witness survivors that it was an airplane flying into the building that had caused the deadly destruction.

While looking back on that frightening morning, Undersecretary of the Navy Susan Livingstone recalled, “There was so much that was learned that day…not only from the perspective of the Pentagon, the military services, and the Department of Defense, but the nation itself, and life fundamentally changed on that day.”[11] Sadly, there were 189 total fatalities in the Pentagon attack. Onboard American Airlines Flight 77, six crewmembers, fifty-three passengers, and five terrorists were killed. Inside the offices of the Pentagon, 125 workers perished in the attacks (55 military personnel and 70 civilians). Of those, 92 died on the first floor, 31 on the second floor, and two perished on the third floor. Despite their unfamiliarity with the Pentagon’s layout, coupled with the horrors and confusion following Flight 77’s impact, NWSC Crane Group proved the largest and best-organized group to escape the Pentagon after the terrorist attack. All 30 members, plus Captain Kern and Undersecretary of the Navy Susan Livingstone, made it out alive with no injuries, a testament of the will to survive by ordinary people put in extraordinary circumstances.