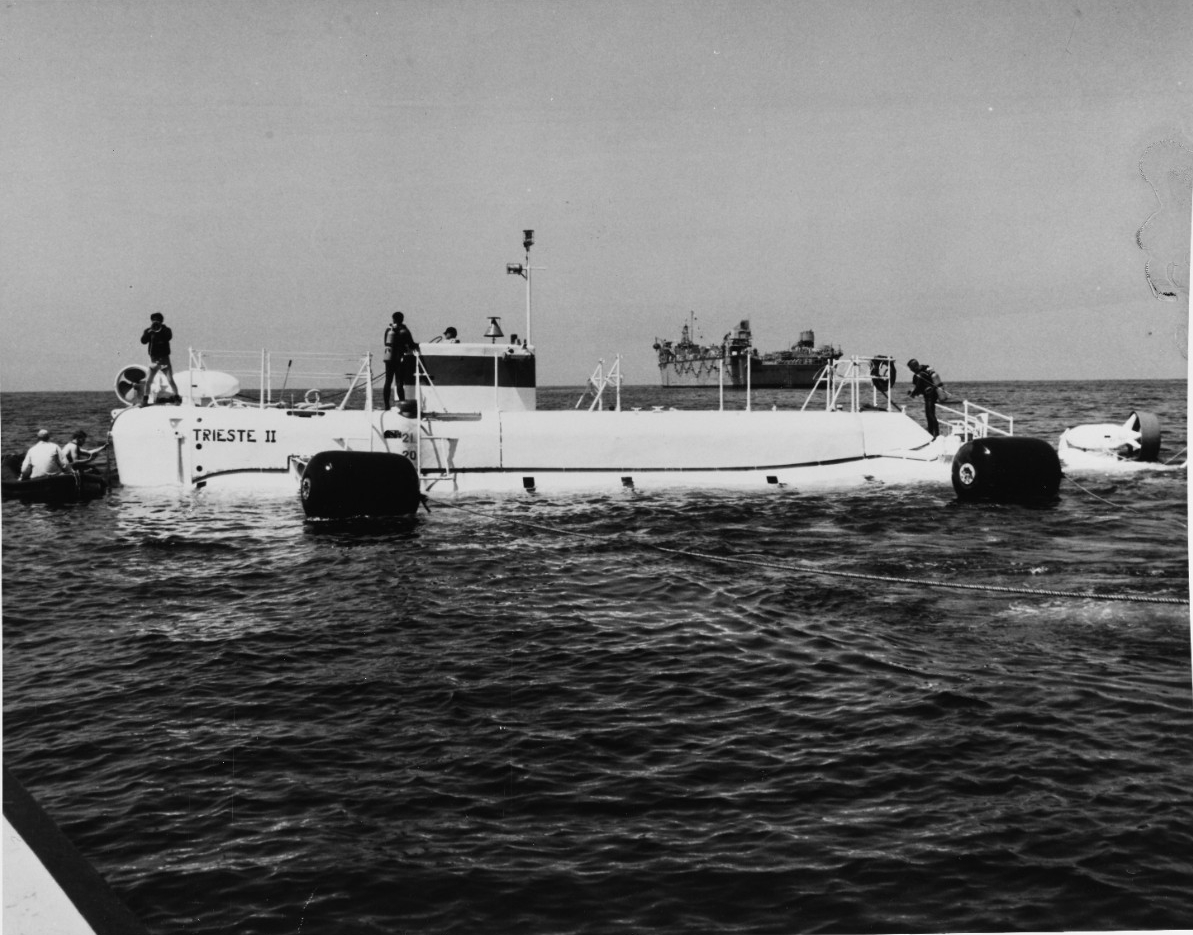 See Trieste for an explanation of the name.

Trieste II was designed by the Naval Electronic Laboratory, San Diego, Calif., as a successor to Trieste, the Navy's pioneer bathyscaphe. Built at the Mare Island Naval Shipyard, Trieste II incorporated the Terni, Italian-built sphere used in Trieste with an entirely new bathyscaphe float, one more seaworthy and streamlined. Completed in early 1964, Trieste II was placed on board USNS Francis X. McGraw (T-AK-241) and shipped, via the Panama Canal, to Boston.

Commanded by Lt. Comdr. John B. Mooney, Jr., Trieste II conducted dives in the vicinity of the loss site of Thresher, operations commenced by the first Trieste the year before. She recovered bits of wreckage, positively fixing the remains as that of the lost Thresher, in September 1964.

Subsequently shipped back to San Diego, Trieste II underwent a series of modifications until April 1965, when she was launched on 19 April to undertake the first of many dives as test and training vehicle for the Navy's new deep submergence program. After a series of dives off San Diego, Trieste II underwent further modifications at Mare Island to improve the craft's undersea navigation, control, and small object recovery.

As the bathyscaphe continued her operations as test vehicle for the deep submergence program, she qualifled four officers as "hydronauts," the beginning of a burgeoning oceanographic operation. Trieste I/'s valuable experience in deep submergence operations has helped in the design and construction of other deep-diving submersibles which could be used in rescuing crews and recovering objects from submarines in distress below levels reachable by conventional methods.

This unique craft was listed only as "equipment" in the Navy inventory until the autumn of 1969. On 1 September 1969, Trieste II was placed in service, with the hull number X-l. Reclassified as a deep submergence vehicle (DSV) on 1 June 1971, Trieste II (DSV-1) continued her active service in the Pacific Fleet into 1980.