Jarvis served on board the frigate Constellation under 45 year-old Commodore Thomas Truxtun during the Naval Quasi-War with France. In the engagement between Constellation and the French frigate Vengeance on 1 February 1800, Jarvis, 13 years of age, commanded the main-top. The rigging that supported the mainmast had been shot away during the action and although warned of his dangerous position, he refused to leave his post. When the mast crashed down soon afterwards, Jarvis and three other sailors were washed overboard and drowned.

Commodore Truxtun, in his report of the action to Secretary of the Navy Benjamin Stoddert, stated that, “I regret much his loss as a promising young officer and amiable young man”. The Sixth Congress in its resolution of 29 March 1800 regarding the engagement between Constellation and Vengeance declared.

“That the conduct of James Jarvis, a Midshipman in said frigate, who gloriously preferred certain death to an abandonment of his post, is deserving of the highest praise and the loss of so promising an officer is a subject of National regret”.

The first Jarvis (Destroyer No. 38) was laid down on 1 July 1911 at Camden, N.J. by the New York Shipbuilding Company; launched on 4 April 1912; sponsored by Jean Knox, daughter of Samuel Knox, President of the building yard; and commissioned on 22 October 1912, Lt. Cmdr. Daniel Pratt Mannix in command. 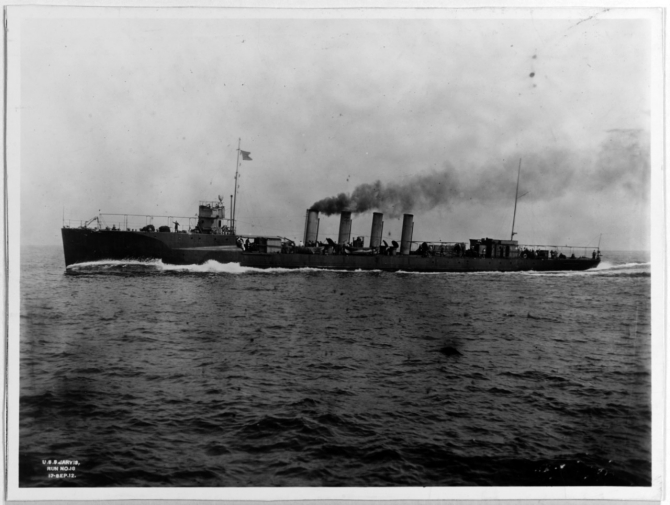 Jarvis on 17 September 1912 running her sea trials. Her armament has not yet been installed. (Naval History and Heritage Command Photograph NH 52188)

Jarvis got underway from the Philadelphia Navy Yard on 18 November 1912, calling at Newport, R.I. and Norfolk, Va. on her way to winter cruising in the Caribbean from the U.S. Navy Base at Guantanamo Bay, Cuba. She returned to Norfolk on 20 March 1913 for gunnery and torpedo practice in Tangier Sound, Chesapeake Bay, followed by speed runs off New Rochelle, N.Y. and tactics from Newport off Long Island and Block Island Sounds. She entered the Norfolk Navy Yard on 2 December for upkeep, which she conducted after winter maneuvers in waters off Cuba, then called at Key West and Pensacola, Fla. She steamed thence on 20 April 1914 with the Fifth Torpedo Division and spent the next six weeks in patrol off Tampico and Vera Cruz, Mexico, during the occupation of Vera Cruz. Jarvis returned Hampton Roads on 16 June and resumed training along the eastern seaboard from Norfolk to Newport between participation in a special scouting problem which took her to Guantanamo Bay.

During the next two years, she conducted strategic problems and battle practice with her flotilla off the New England coast, the Virginia capes and the Caribbean. She entered the New York Navy Yard on 17 May 1917 in order to prepare for distant service.

Jarvis departed New York on 26 May 1917 to join U.S. Naval Forces that operated in the European waters under Vice Adm. William Sowden Sims. Reaching St. Nazaire, France on 8 June 1917, she sailed three days later to Queenstown, Ireland. The destroyer patrolled against submarines along the coast of England and Ireland and formed part of an effective convoy escort system which afforded protection to inbound and outbound convoys in ocean approaches ranging as far as two hundred miles from shore.

She rescued 41 survivors of the torpedoed British tanker Batoum on the morning of 19 June 1917 after she was attacked by U-61 commanded by Victor Dieckmann. The master of Batoum reported that stoker, J. Fleming, was the only man missing. No sign of him was seen in the water and the ship slipped slowly beneath the waves by the stern at 0822 Greenwich Mean Time (G.M.T.) One day later, Jarvis braced for a possible torpedo attack and positioned herself between the Mechanician and a U-boat in order to protect the merchantman from enemy attack. Several minutes afterwards McDougal (Destroyer No. 54) arrived and took over escort duties for Mechanician while Jarvis set course for Berehaven, County Cork, Ireland.

At 1645 G.M.T. on 25 July, Jarvis rescued 22 survivors of the British merchant ship Purley that was sunk by a U-boat off of the Irish coast. One of the men had four fingers on his right hand badly mangled while lowering a life boat. Twenty-three others were picked up by Wilkes (Destroyer No. 67). The survivors were landed at Queenstown four days later.

On 15 September 1917, Jarvis arrived at Milford Haven, proceeded to Pembroke and fueled. She then stood out for Dale Roads in order to escort Moldavia. Soon after getting underway, the British merchant vessel Idomeneus was torpedoed by U-67, commanded by Hans Nieland, approximately seven miles south of the entrance to the harbor. Jarvis along with O’Brien (Destroyer No. 51) and several trawlers steamed to assist and retrieve survivors. They patrolled the area afterwards, found no evidence of U-boat activity and returned to Dale Roads that evening.

At 0840 the following day, Jarvis heard the sounds of firing west of her position. Winslow, (Destroyer No. 53), went to investigate, but found nothing. Fishing boats ten miles west of her position also reported that no submarines were seen or guns heard, but the firing was distinct. After sighting heavy black smoke, Jarvis sent the patrol boat P-55 to investigate and she found it to be the schooner Henry Lippett of New York on fire aft and abandoned. She had apparently been shelled, but there was no sign of the crew and an oil slick indicated that she had sailed for several miles.

As a unit of the United States Naval Forces in France, she drove off several German submarines from the track of convoys along the coast of France and gave constant protection to shipping until 22 July when she collided with Benham (Destroyer No. 49), causing considerable damage to her bow. The ship then sailed for repairs at Birkenhead, England. After resuming her patrol and escort duties at Brest on 20 September, she sailed on 28 December for the United States. 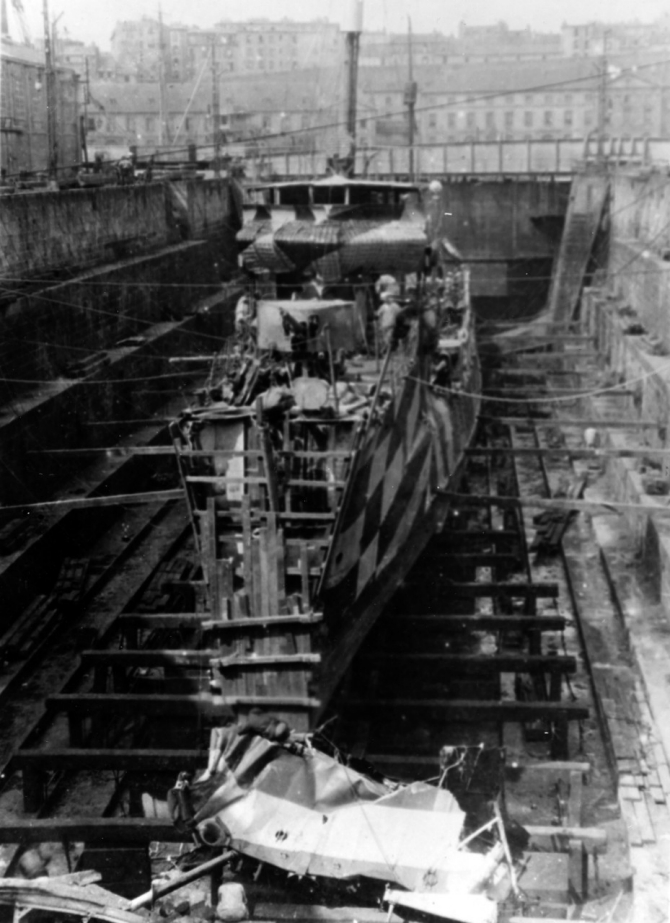 Jarvis on 22 July 1918 at Brest, France in drydock after her collision with Benham (Destroyer No. 49). The wreckage of her bow was cut away by a repair crew from Prometheus (Repair Ship No. 2). Upon completion of temporary repairs, Jarvis went to Birkenhead, England, where permanent repairs were completed in September 1918. (Naval History and Heritage Command Photograph NH 64983)

Jarvis called at the Azores and Bermuda on her way to Philadelphia where she arrived on 12 January 1919. After voyage repairs, she joined Flotilla B of the U.S. Atlantic Fleet for operations along the eastern seaboard which took her as far north as New York City. She entered the Philadelphia Navy Yard on 21 July 1919 in order to prepare for inactivation and decommissioning on 26 November 1919. She remained inactive at Philadelphia and her name was stricken from the Naval Vessel Register on 8 March 1935. She was sold for scrap on 23 April 1935 to Michael Flynn of Brooklyn, N.Y. under terms of the London Treaty of 1930 which limited naval armament. 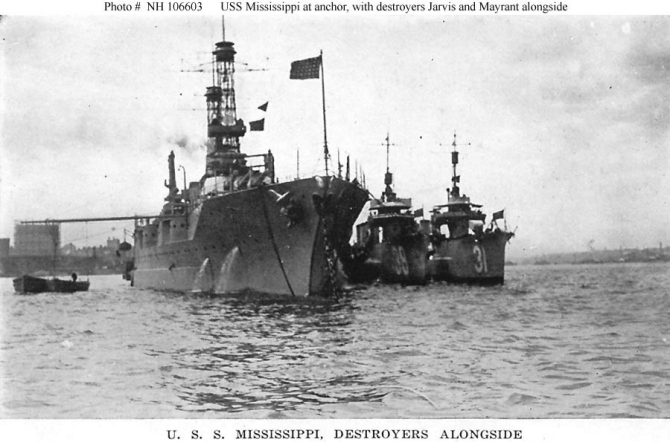 Mississippi (Battleship No. 41) at anchor in early or mid-1919. Jarvis and Mayrant (Destroyer No. 31) are moored to her port side. (Naval History and Heritage Command Photograph NH 106603)