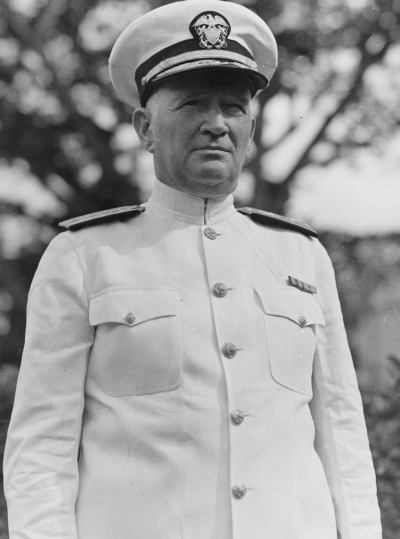 Jesse Barrett Oldendorf was born in Riverside, California 16 February 1887, attended public schools there, and was appointed to the US Naval Academy from the Eighth District of California in 1905. As a Midshipman, he participated in swimming, tennis, and won the Sharp-shooter's Medal. Graduated in June 1909, he was commissioned Ensign on 5 June 1911, after serving the two years at sea then required by law. He attained the rank of Vice Admiral to date from 7 December 1944, and was transferred to the Retired List of the Navy on 1 September 1948, and advanced to the rank of Admiral.

Upon graduation, he was assigned sea duty and served consecutively in the USS California (armored cruiser), flagship of the Pacific Fleet, the USS Preble, USS Denver, USS Whipple, USS San Diego (ex-California), and the USS Hannibal. When detached from the Hannibal on 10 October 1916, he was ordered to duty in charge of the Navy Recruiting Office at Pittsburgh, Pennsylvania. In June 1917, after the outbreak of World War I, he had command of the Armed Guard Unit attached to the US Army transport Saratoga, which was sunk later in a collision off New York. On 6 August, the same year, he reported aboard the USS President Lincoln, of the Cruiser and Transport Force, and was Gunnery Officer of that vessel when she was sunk by a German submarine off the coast of Ireland on 31 May 1918.

Returning to the United States, he had duty as Engineer Officer in the USS Seattle from August 1918 until March 1919. Then reporting to Commander, US Naval Forces operating in European Waters, he was assigned duty as Executive Officer of the former German transport Patricia. From July to October 1919 he was Officer in Charge of the Pittsburgh Naval Recruiting Station and Special Disbursing Agent, and for the succeeding eight months served as Naval Inspector of Machinery at the Baltimore Shipbuilding and Dry Dock Company and Bethlehem Steel Company, Baltimore, Maryland, with additional duty as Naval Inspector of Engineering Material for that District. From June to October 1920, he was Officer in Charge of the Branch Hydrographic Office in Baltimore.

In October 1921 he went aboard the USS Dolphin as Aide and Flag Secretary on the Staff of the Commander, Special Service Squadron, then operating in Central and South American Waters. In July 1922 he reported for duty as Aide to the Commandant, Navy Yard, Mare Island, California. When that duty was completed, he assumed command of the destroyer Decatur in competitive maneuvers. When detached from that command on 30 May 1927, he was ordered as Aide to the Commandant, Navy Yard, Philadelphia, Pennsylvania, serving there until June 1928. Between June 1928 and July 1930 he completed courses at the Naval War College, Newport, Rhode Island and Army War College, Washington, DC. He then returned to sea, as navigator of the USS New York, serving until June 1932.

For the next three years he had duty as an instructor in the Naval Academy's Department of Seamanship and Navigation. In June 1935 he reported as Executive Officer of the USS West Virginia, and after two years in that assignment, was ordered to the Bureau of Navigation, Navy Department, Washington, DC as an Officer in charge of the Naval Recruiting Section. In October 1939 he assumed command of the USS Houston and when detached on 30 August 1941, was ordered to the Staff of the Naval War College, Newport, Rhode Island. In February 1942 he was named Commander All Forces, Aruba-Curacao Area, Netherlands West Indies, and from 2 July 1942 until 21 April 1943, served as Commander, Naval Operating Base, Trinidad, British West Indies. He was awarded the Distinguished Service Medal with the following citation:

"For exceptionally meritorious service...as Commander All Forces Aruba-Curacao Area from March 2 to July 2, 1942, and as Commander Trinidad Sector, Caribbean Sea Frontier and Commandant of Naval Operating Base, Trinidad, from 2 July, 1942 to April 19, 1943. Displaying excellent judgment and outstanding leadership, Rear Admiral Oldendorf assisted materially in the effective employment of the Naval Surface forces and combined Army-Navy aircraft assigned to his command in the anti-submarine warfare. By his forceful initiative and intelligent planning, he coordinated and directed the efforts of various services, which resulted in marked improvement and efficiency in the port if Trinidad."

He commanded a Task Force of the Atlantic Fleet from 2 May to 25 November 1943 and in January 1944 was ordered to the Pacific Area as Commander, Cruiser Division 4. The following December he was designated Commander, Battleship Squadron ONE, with additional duty in command of Battleship Division TWO. For service in those commands he was awarded the Legion of Merit, Gold Star in lieu of a second Legion of Merit, two Gold Stars in lieu of the second and third Distinguished Service Medal, and the Navy Cross. The citations follow:

Legion of Merit (with Combat "V"):
"For exceptionally meritorious conduct...as Commanding Officer of a Fire Support Group during the assault and occupation of Roi and Namur Islands, Kwajalein Atoll and Eniwetok Atoll of the Marshall Islands...Rear Admiral Oldendorf directed the First Support Group in the fierce and effective bombardment of enemy-held islands during the assault phases of both these vital operations. Skillfully maneuvering the ships of his group close to known shoals, he directed the delivery of supporting gunfire to reduce to a minimum the enemy's opposition to the assault of our forces...and contributed to the successful capture of these island..."

Gold Star in lieu of Second Distinguished Service Medal:
"For exceptionally meritorious service...as Commander of all Fire Support Groups during action against the Japanese-held Saipan and Tinian Islands in the West Pacific, June 14 to August 1, 1944...Rear Admiral Oldendorf organized the firepower of all battleships, cruisers and destroyers comprising his support groups for furious onslaught. Disposing his ships for maximum striking power in a determined offensive executed in preparation for our amphibious attack on these important Japanese-held islands, he coordinated his component units and led the mighty armada into the dangerous waters of the assault area where his powerful guns assailed the enemy's strong coastal defenses in a smashing naval bombardment. Aggressive and unceasingly vigilant in his support tactics, (he) controlled the terrific fire of his vessels with extreme proficiency, effectively delivering all call fire, harassing and counter-battery fire as required by our troops ashore during and after the initial landings..."

Gold Star in lieu of Second Legion of Merit:
"For exceptionally meritorious conduct...as Commander of the Fire Support Group in the assault of the strongly defended Japanese-held Peleliu and Anguar Islands, September 12 to 30, 1944. Entrusted with the direction of minesweeping, underwater demolition and shore bombardment preparatory to the assault, Vice Admiral Oldendorf ably carried out his duties without loss while under the continuous threat of, and often under actual enemy fire. He supervised the delivery of accurate and devastating fire against hostile defenses, thereby contributing to the success of our offensive..."

Navy Cross:
"For distinguishing himself by extraordinary heroism in action against the enemy on 25 October 1944, in support of landings on a heavily defended enemy-held island base. In the Battle of Surigao Strait, as Commander Support Force he engaged a powerful detachment of the Japanese Fleet, consisting of battleships, cruisers, and destroyers, and in a short but decisive action practically annihilated the enemy force. Fleeing remnants were closely pursued by units of his command, which, with the aid of cooperating aircraft, completed their destruction. His personal courage, determination, and perseverance, were reflected in the outstanding performance of the force under his command, which resulted in a brilliant naval victory and incalculable damage to the enemy..."

Gold Star in lieu of the Third Distinguished Service Medal:
"For exceptionally meritorious service...as Commander Bombardment and Fire Support Group, prior to and during the invasion of Leyte, Philippine Islands. A master of amphibious warfare and all phases of capital ship operations, Rear Admiral Oldendorf rendered invaluable assistance to the Philippine attack Force Commander during the perfection of plans which culminated in the Leyte invasion on October 20, 1944. Under his forceful and brilliant leadership, battleships, heavy and light cruisers and destroyers blasted Japanese shore installations in sustained and devastating bombardment, silencing enemy batteries and thus making possible the landing of liberating forces with but light casualties...(He) played a vital role in countering powerful resistance by hostile air and surface forces toward the liberation of the Philippines from Japanese domination..."

In November 1945 he was ordered to duty as Commandant, Eleventh Naval District, San Diego, California and from 14 January 1946 also served as Commander, Naval Operating Base, San Diego. In February 1947 he became Commander, Western Sea Frontier, with additional duty as Commander, Pacific Reserve Fleet, Headquarters at San Francisco, California. On 25 June 1948 he was relieved of these commands, and reported to the Eleventh Naval District, San Diego for duty pending his retirement on 1 September 1948.

In recognition of his services as a wartime naval leader, Admiral Oldendorf received letters of regret upon his retirement, congratulations on his distinguished career, and expressing the gratitude of the nation from the Secretary of the Navy John L. Sullivan and Admiral Louis E. Denfeld, Chief of Naval Operations.

Admiral Oldendorf died in Portsmouth, Virginia on 27 April 1974 and was interred at Arlington National Cemetery.