President Lincoln was built by Harland & Wolff, Belfast, Ireland [Northern Ireland], U.K., completed on 14 May 1907, she was originally named Scotian; she was sold to the Hamburg-Amerikanische Packetfahrt-Actien-Gesellschaft (HAPAG) shortly afterward and initially renamed Berlin, then renamed again as President Lincoln. The German steamer was seized in New York harbor in 1917 after the declaration of war against Germany. She was turned over to the U.S. Shipping Board and then transferred to the Navy for operation as a troop transport.

Having been damaged severely by her German crew prior to her internment, President Lincoln underwent extensive repairs and conversion at Robin's Dry Dock & Repair Co., Brooklyn, N.Y. The ship was commissioned on 25 July 1917, at the New York Navy Yard, Brooklyn, N.Y., Cmdr. Yates Sterling, Jr., in command. 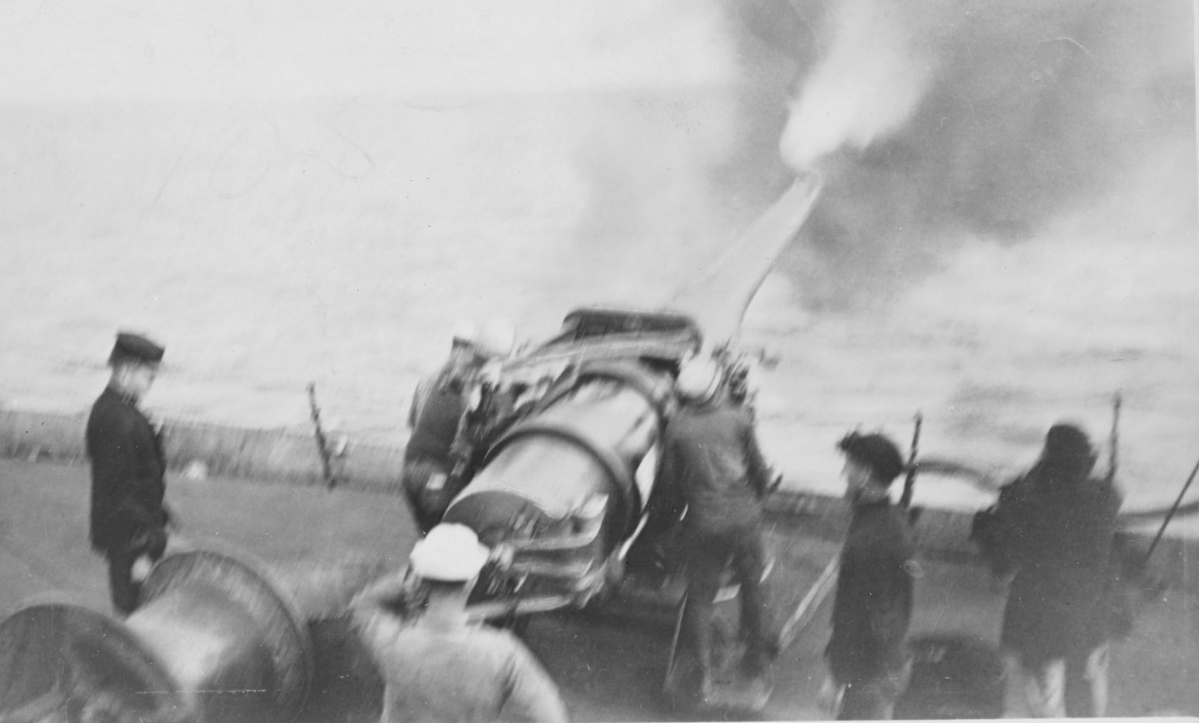 President Lincoln embarked 4,669 troops and departed Hoboken, N.J., and departing on 19 October 1917, made her first voyage, with Group No. 9, carrying units of the American Expeditionary Force (AEF) to France. She arrived on 31 October at St. Nazaire, France (Base No. 8), and disembarked the troops. She embarked homebound passengers and cleared St. Nazaire, on 18 November. Bound for Hoboken, she arrived on 29 November, with Covington (Id. No. 1409) and Leviathan (Id. No. 1326). Repeating this cycle the transport would make four additional eastbound transits. The second was again from Hoboken, with 4,509 troops on board. Departing on 12 December, with Group No. 14, she reached Brest, France (Base No. 7), on 27 December. She completed discharging her embarked troops on 2 January 1918. Clearing Brest at 2:30 p.m. on 17 January, President Lincoln, in company with Covington, and Pocahontas (Id. No. 2267), and escorted by Reid (Destroyer No. 21), Flusser (Destroyer No. 20), Smith (Destroyer No. 17), and Lamson (Destroyer No. 18), stood out bound for Tompkinsville [Staten Island], N.Y. (Base No. 21). Once clear of the “Danger Zone,” the escorts parted with the outbound transports at 2:30 a.m. the next day, and steamed to rendezvous with inbound convoys in the Western Approaches. The transport returned to Tompkinsville on 31 January. She then shifted to the U.S. Army Docks at Hoboken the next day. On 10 February, President Lincoln was again eastbound from Hoboken, with 4,482 troops as part of Group No. 20 [Von Steuben (Id. No. 3017) Finland (Id. No. 4543), Martha Washington (Id. No. 3019), and Antigone (Id. No. 3007)], initially escorted by Pueblo (Armored Cruiser No. 7). She arrived at St. Nazaire, on 24 February with Finland, War Rose, Santiago (Id. No. 2253), Charlton Hall (Id. No. 1359), and Mexican (Id. No. 1655). On 3 March, Wilkes (Destroyer No. 67), O'Brien (Destroyer No. 51), Reid, and Preston (Destroyer No. 19) took President Lincoln, George Washington (Id. No. 2049), and Covington in the direction of Brest, at a speed of 15 knots.  She departed the next day, 4 March, in company with Wilhelmina (Id. No. 2168), Finland, and Panaman (Id. No. 3299), and raised Gravesend Bay, N.Y., on 16 March. She entered the New York Navy Yard, two days later. Then she shifted to the Army Docks at Hoboken on 22 March. On her fourth passage she departed Hoboken, on 30 March, and reached St. Nazaire with Group No. 26, where she disembarked her 4,644 troops on 13 April. Departing again, on 21 April, she steamed from Brest, and stood in to New York en route to Hoboken on 1 May. Nine days later, on 10 May, she began her fifth and final eastbound passage in Group No. 35. Loaded with 4,625 troops, she arrived at Brest, on 23 May, and discharged the U.S. troops embarked.

President Lincoln got underway on 29 May 1918 with the transports Rijndam (Id. No. 2505), Susquehanna (Id. No. 3016), and Antigone, escorted by four American destroyers and one French aviso, Oise, for the return voyage to the United States. The escorts had orders, upon leaving the westbound convoy, to join, on May 31, storeship convoy HN 69 from New York. The other escort vessels of U.S. forces in France were all employed: four were escorting two troopships to Brest; two were required for use on 30 May, to bring a troopship group and Leviathan into Brest and to go out the same afternoon to join a convoy of storeships from New York; the two remaining destroyers were undergoing overhaul. Accordingly, at 8:43 p. m., on May 30th, it being thought that the westbound convoy would be comparatively safe during the night run before it, the escort vessels left it. It was learned afterward that U-90 (Kapitänleutnant Walter Remy commanding) had sighted the westbound convoy that afternoon, had overtaken it during the night, and had taken position well ahead to await its approach. On the morning of 31 May, at 8:57 a.m., the convoy was attacked. Three torpedoes crossed the bow of Rijndam and plunged into President Lincoln’s port side, two forward near the bridge and the third aft of the engine room. Though the stricken vessel settled rapidly, she wirelessed her position. It was soon evident to the captain that she was doomed and though the ship’s guns were manned in the hope that U-90 would show herself, Capt. Foote ordered the ship to be abandoned. Although she soon sank at 9:30 a.m., the comparatively small loss of life, three officers and 23 enlisted men, was confined to the crew. None of the Army or other passengers embarked were lost. Shortly after the ship went down, the crew pulled the lifeboats, 12 in all, among the rafts and lashed them together to prevent drifting apart and becoming lost. About 30 minutes after the ship went down; U-90 surfaced and came among the boats searching for the commanding officer or other senior officers to take as prisoners. Able to identify only one officer, Lt. Edouard V.M. Isaacs, USNRF, the Germans took him on board U-90 and submerged. 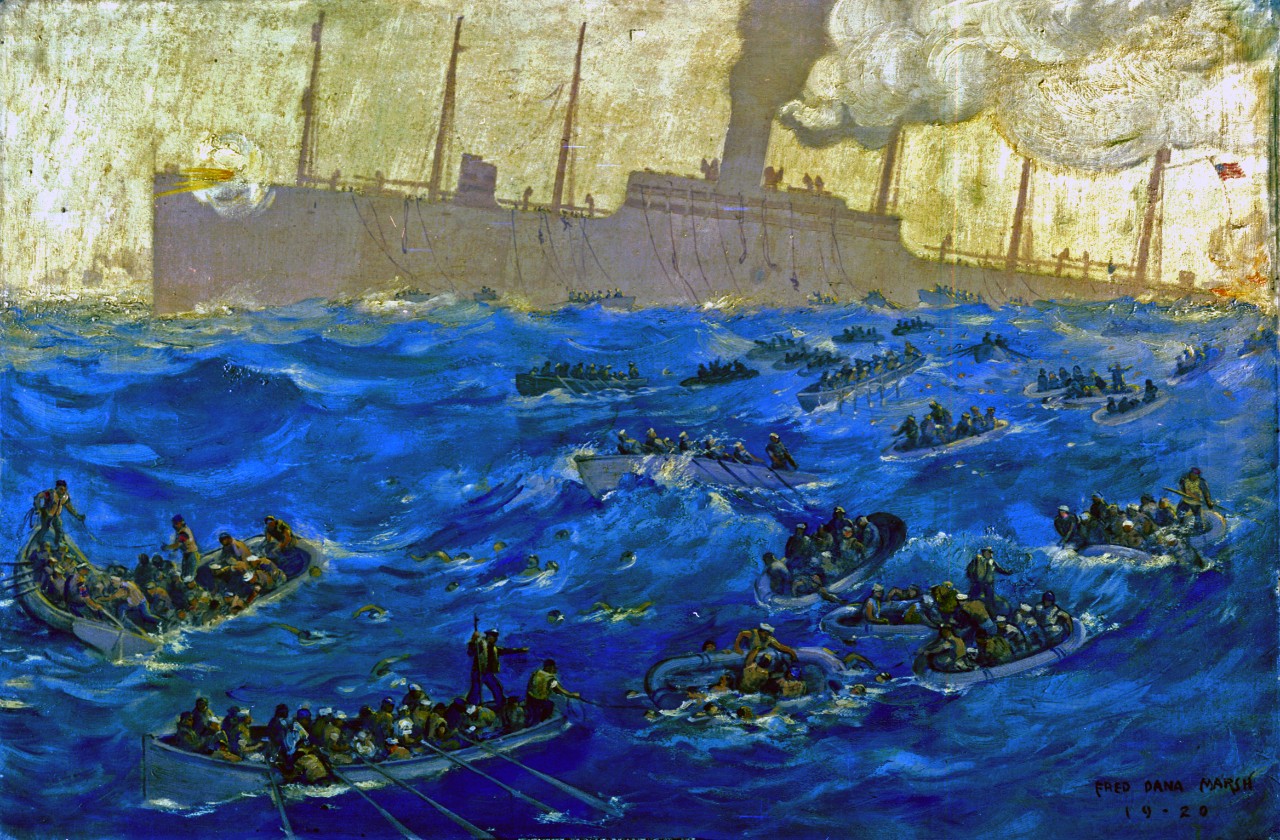 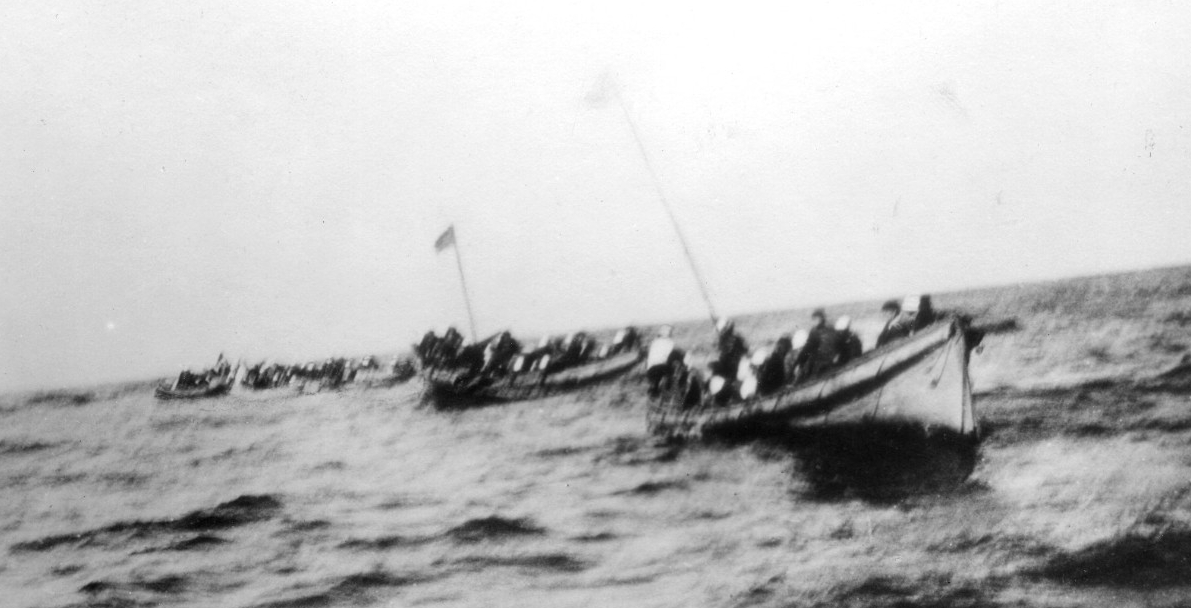 Caption: Sinking of President Lincoln on 31 May 1918 Life boats and rafts adrift with survivors on board, after the ship was torpedoed and sunk by the German submarine U-90. Courtesy of the Naval Historical Foundation - President Lincoln Collection. (U.S. Army Signal Corps Photograph, Naval History and Heritage Command Photograph NH 103275)

The next morning, 1 June 1918, Smith returning to port  loaded with survivors, sighted U-90 ahead of her and made full speed to the attack. The submarine naturally submerged, and Smith and Warrington, on arriving in the position of her sighting, dropped some twenty depth charges which exploded. No evidence, however, of any success appeared on the surface, and the two destroyers, conscious of the importance of landing the rescued, abandoned the attack and continued on to Brest. Lt. Isaacs, from his unique vantage point within U-90, later reported that the depth charge attack severely shook up U-90. The destroyers entered Brest the following day, 2 June, and disembarked the President Lincoln survivors where ambulances from Base Hospital No. 5 took care of the wounded.

A court of inquiry was convened at Brest on board Great Northern (Id No. 4569) to address the loss of the ship (3-5 June 1918). The court’s findings were that no responsibility was attached to any on board the ship for her loss, which was the result of an act of war. Later on 5 June, the survivors from President Lincoln, minus those still in hospital, departed Brest embarked on Great Northern and arrived at Hoboken on 12 June.

Lt. Isaacs later escaped from a German prison camp and made his way to neutral Switzerland. He was subsequently turned over to the U.S. Legation at Bern whence he proceeded to London, England, via Paris, France. For his actions, Lt. Isaacs [who changed his name to Edouard V. M. Izac in July 1925] was awarded the Medal of Honor. 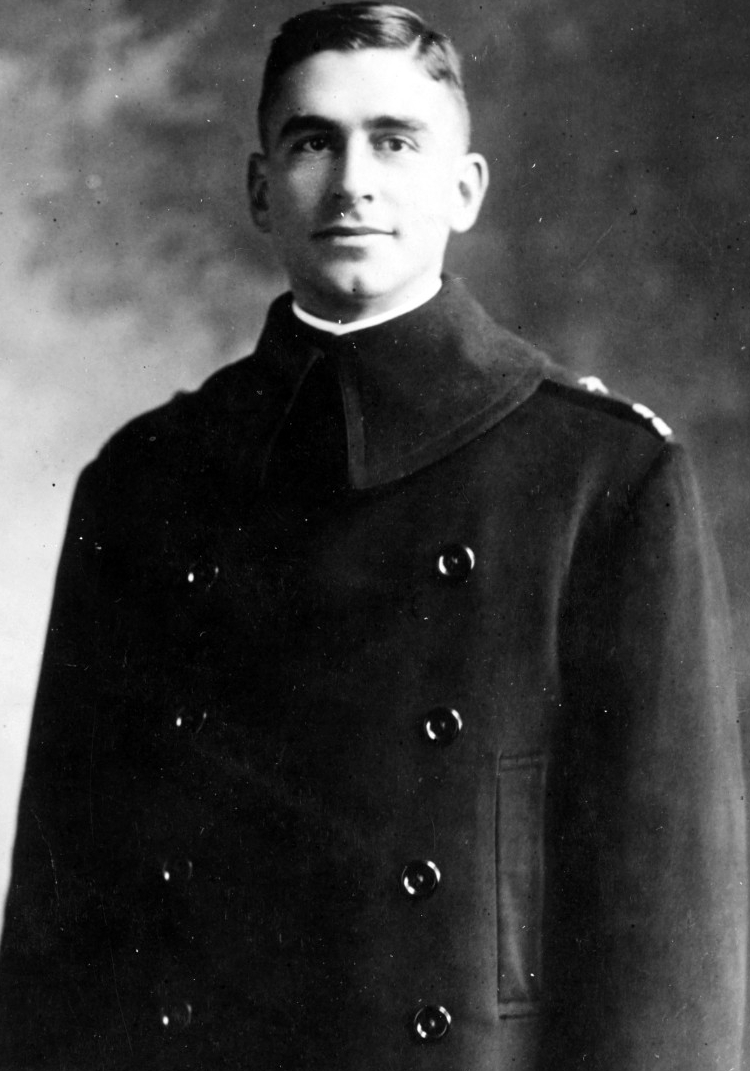 Caption: Lt. Edouard V. M. Isaacs’s portrait taken by Harris & Ewing, Washington, D.C. Lt. Isaacs was awarded the Medal of Honor for his heroism as a prisoner of war after President Lincoln was sunk on 31 May 1918. (Naval History and Heritage Command Photograph NH 48836) 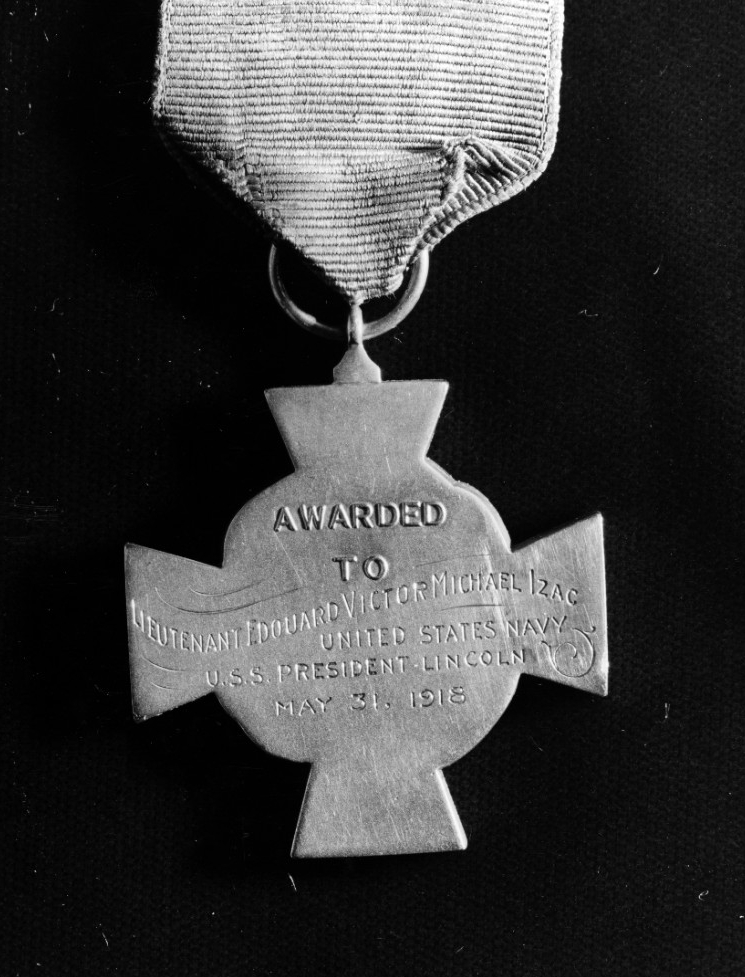 Caption: Reverse of the Tiffany Cross pattern Medal of Honor awarded to Lt. Isaacs for heroism following the sinking of President Lincoln on 31 May 1918, his capture, and subsequent escape from a German prisoner of war camp. (Naval History and Heritage Command Photograph NH 82602)

President Lincoln was stricken from the Navy List by General Order No. 417 of 26 August 1918.