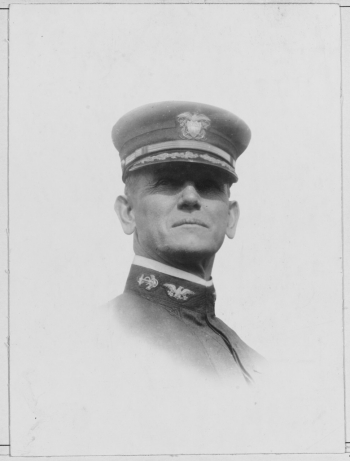 After graduation in 1890, Rear Admiral Vogelgesang had consecutive duty in USS Alliance, USS Bancroft, USS Mayflower, USS Kentucky, and was watch and division officer in USS Adams, and USS Mohican until 1895. Following duty in the Bureau of Navigation, Navy Department, Washington, DC, he returned to sea in 1896 and the next three years served in USS Bancroft and USS Celtic. He was on duty at the Naval War College, Newport, Rhode Island, from 1914-1917 when reported for duty as Chief of Staff to the Commander, Asiatic Fleet. For his services in this command he was awarded the Navy Cross with the following citation:

“For exceptionally meritorious service in a duty of great responsibility as Chief of Staff to Commander in Chief, US Asiatic Fleet….”

In January 1918, Rear Admiral Vogelgesang became Senior Member of the Naval Commission to Brazil in connection with the Brazilian War College. A year later he assisted in fitting out USS Idaho at the New York Shipbuilding Company, Camden, New Jersey, and served as Commanding Officer of that battleship from her commissioning, 24 March 1919, until July 1920, when he was transferred to duty as Chief of Staff to the Commander, Atlantic Fleet. He served as Commandant, Navy Yard, New York, and Commandant, Third Naval District, New York from July 1921, until November 1922, when he had duty in connection with organizing the US Naval Mission to Brazil. He served as Chief of that Mission from December 1922, until January 1925.

Rear Admiral Vogelgesang was Commander, Battleship Division 2, Scouting Fleet, from April 1925 until June 1926, when he was transferred to duty as Commander, Light Cruiser Division, Scouting Fleet. In December he entered Naval Hospital at Washington, DC, where he died 16 February 1927.

A destroyer (DD-862), the USS Vogelgesang, has been named in his honor.