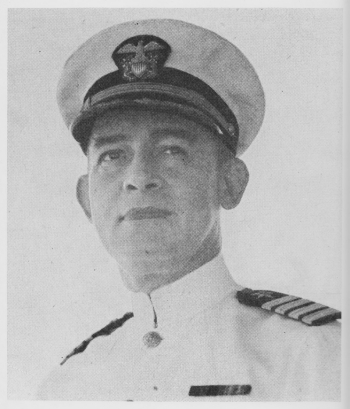 Captain Van Valkenburgh was born in Minneapolis, Minnesota, 5 April 1888, and was appointed to the Naval Academy from the Fifth District of Wisconsin in 1905. After graduation in 1909, he served in USS Vermont, USS South Carolina and USS Rainbow, of the Asiatic Fleet, until 1914, when he reported for duty at the Naval Academy and during 1920 and 1921 was engineer officer of USS Minnesota.  He was executive officer of USS Savannah from January until November 1922, and during the next three scholastic years he was at the Naval Academy.

After serving in USS Maryland, he was on duty in the Office of the Chief of Naval Operations from 1928 until June 1931, when he was ordered to command the destroyer Talbot. He was Commander, Destroyer Division Five, Battle Force, from April 1932, until June 1933, and, upon completion of the Naval War College course in June 1934, reported for duty at the Navy Yard, New York, as an Inspector of Naval Material. He assumed command of USS Melville in June 1936, and in August 1938, assumed duty as Inspector of Naval Material, New York District, New York. He was commanding officer of USS Arizona, and was killed in the attack on Pearl Harbor on 7 December 1941.

Captain Van Valkenburgh was awarded the Medal of Honor, posthumously, by the President of the United States in the name of Congress, with the following citation:

“For conspicuous devotion to duty, extraordinary courage, and complete disregard of his own life, during the attack on the Fleet in Pearl Harbor, Territory of Hawaii, by Japanese forces, on 7 December 1941. As Commanding Officer of the U.S.S. ARIZONA he gallantly fought his ship until the U.S.S. ARIZONA blew up from magazine explosions and a direct bomb hit on the bridge which resulted in the loss of his life.”

Captain Van Valkenburgh had the Haitian Campaign Medal, and the Victory Medal, Atlantic Fleet Clasp.  He has been awarded the Purple Heart Medal, posthumously, and is entitled to the American Defense Service Medal and the Asiatic-Pacific Area Campaign Medal.

A Destroyer, USS Van Valkenburgh, has been named in honor of Captain Van Valkenburgh. His widow, Mrs. Franklin Van Valkenburgh sponsored the ship when she was launched, 19 December 1943, at the plant of the Gulf Shipbuilding Corporation, at Chickasaw, Alabama.