Change of Command and Retirement Ceremony of the Commandant Naval District, Washington, D.C. 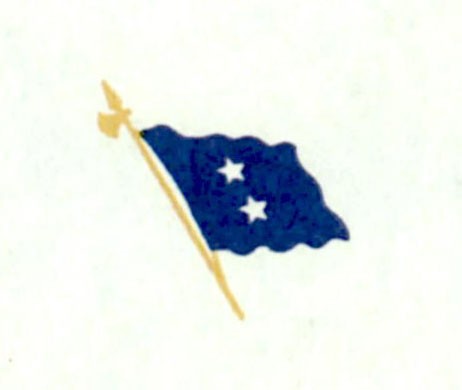 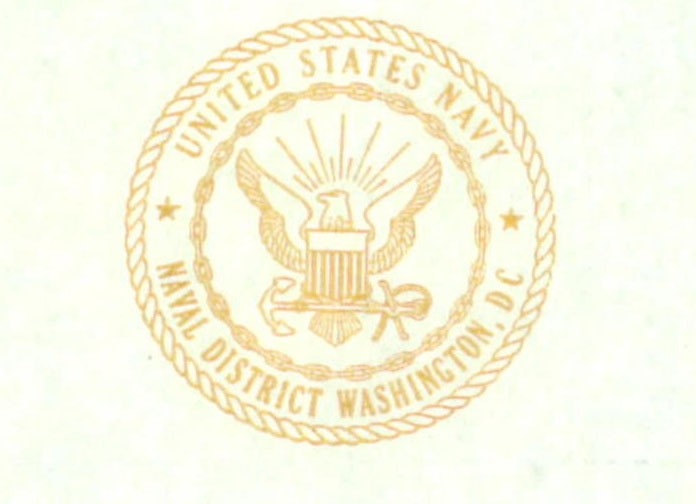 Presentation of the National Ensign to Rear Admiral Esch

by the Navy League of the United States

Remarks by the Secretary of the Navy

The Reading of Orders

Accompanied by the U.S. Navy Band 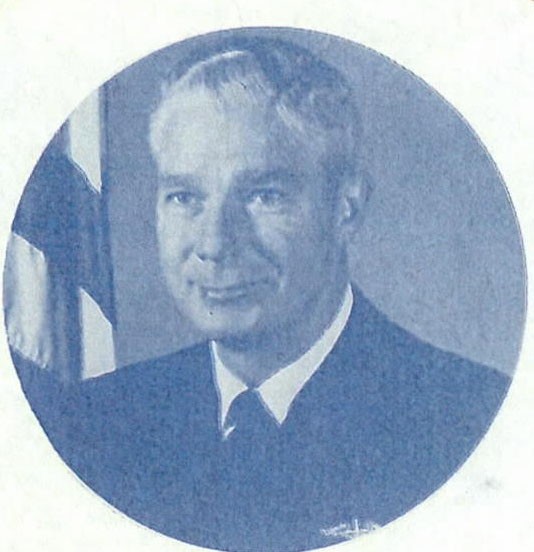 Ralph H. Carnahan was born in Pittsburgh, Pennsylvania, On October 1, 1924, son of Dr. Donald Carahan (now deceased) and Mrs. (Marion Barbara Stegall) Carnahan.  He attended Carnegie Institute of Technology, Pittsburgh, for a year, prior to entering the U. S. Naval Academy, Annapolis, Maryland, in 1943.  He was graduated and commissioned Ensign witht he Class of 1947 on June 5, 1946.

Following graduation he servced on board the Carrier Saidor and then the cruiser Helena.  After completing Submarine School in December 1948, he was assigned to the USS Grouper (SSK-214) and in April 1952 he reported to the USS Harder (SS-568) and served as Engineer Officer from her commissioning until June 1953.  After a shore tour at the U. S. Naval Academy, he served on the USS Gudgeon (SS-567) and then USS Bass (SSK-2) in Pearl Harbor prior to commencing nuclear power training in July 1957.  Upon completion of that training, he commissioned the USS Skipjack (SSN-585) on April 15, 1959, as Executive Officer and Navigator.  Subsequently, from April 1960 to September 1966, he commanded in turn the USS Jallao (SS-368), the Nuclear Power School, Bainbridge, Maryland, the USS Robert E. Lee (SSBN-601), and the USS John Marshall.

From October 1966 to July 1969 he serced as Deputy Director, Policy Planning Staff, International Security Affairs, Office of the Secretary of Defense.  Following, while a student at the Air War College, Montgomery, Alabama, he attended Auburn University and received a Master's Degree in Political Science.  FRom August 1970 to July 1971 he was Director, Polaris/Poseidon Operatins on the Staff of Commander in Chief Atlantic.  He transferred in July 1971 to become Chief of Staff and Aide to Commander Submarine Force, U. S. Atlantic Fleet.  He subsequently served as Special Assistant to Director, Navy Program Planning, in the Office of the Chief of Naval Operations.  After selection to Rear Admiral in March 1973, he was transferred in April to Defense Mapping Agency as Deputy Director for Plans, Requirements and Advanced Technology.

Rear Admiral has been awarded the Legion of Merit, the Meritorious Service Medal with Gold Star, the Navy Expeditionary Medal, and numerous Service medals.  He is a member of Pi Sigma Alpha, Political Science Honorary Fraternity. 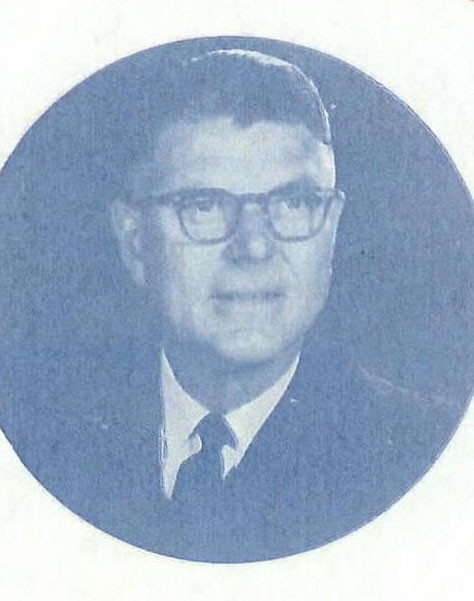 Rear Admiral Arthur G. Esch is the son of Rev. and Mrs. Ben Esch, born 31 January 1917 in Washington, Illinois. Local schools, Severn School, Eureka College, U.S. Naval Academy BS 1940. He holds graduate degrees in Law, 1949, and International Affairs, 1964, from George Washington University. Five and a half years­ – throughout WWII –were spent in his first ship USS Louisville: Ensign to Lieutenant Commander, Gunnery Officer. Many destroyer command billets since, including: CO POWER, ComDesDiv 282, ComDesRon TWO, ComCruDesFlot ELEVEN, and ComCruDesGru-7thFlt. Some half dozen tours in each the SIXTH and SEVENTH Fleets have featured his sea experience. And he was Executive Officer of the cruiser NORTHAMPTON (CLC-1). 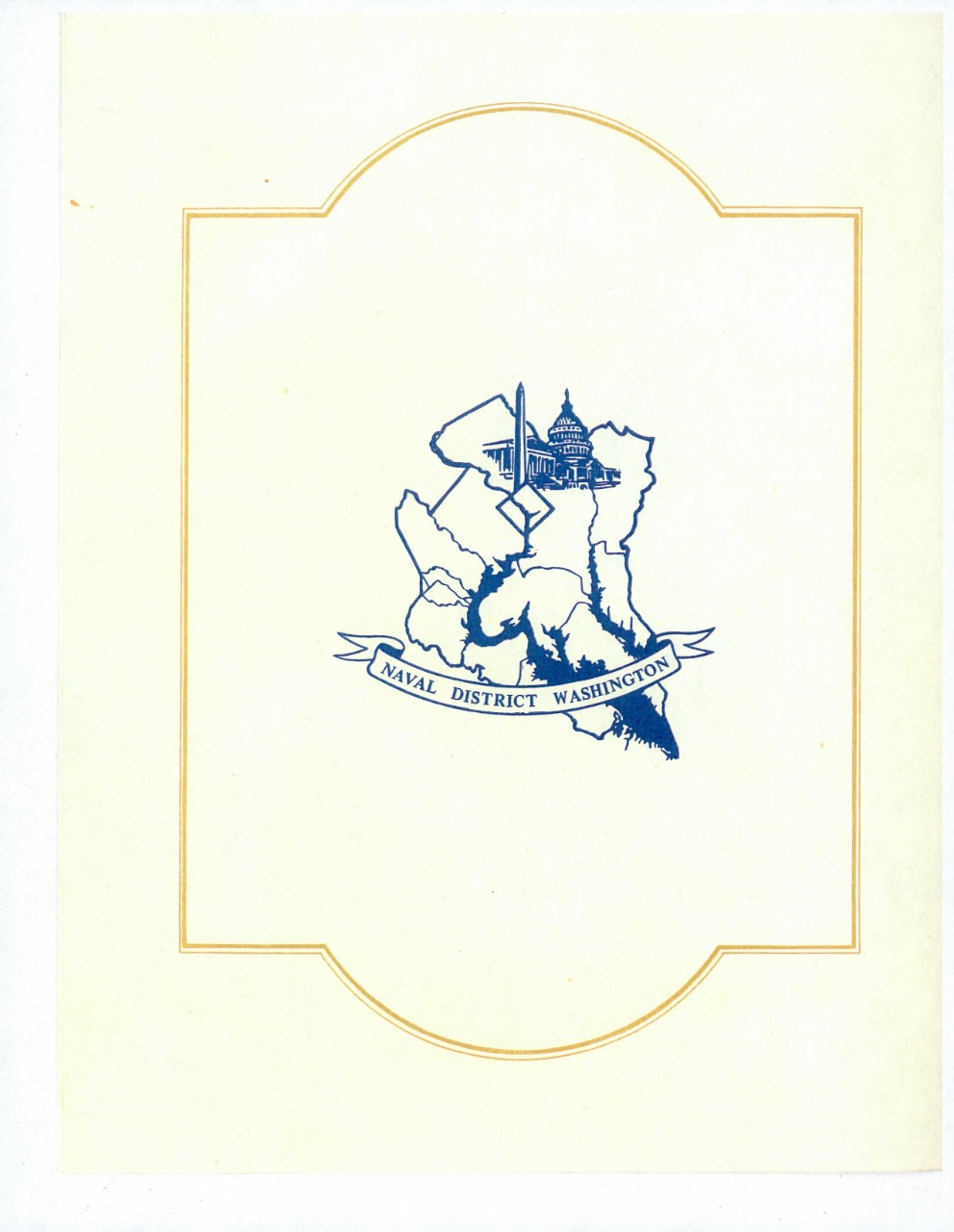 Envisioned by George Washington and placed into existence by President John Adams, the Washington Navy Yard was founded on October 2, 1799. The first Superintendent was Captain Thomas Tingey who was ordered to proceed to Washington in [sic] January 22, 1800 to direct the planning and layout.

In 1804 Benjamin Latrobe was designated “Engineer of the Navy Department” and was called upon to prepare and submit a plan for the development of the Washington Navy Yard and to design buildings to be constructed. The plan was completed that same year and approved by the Secretary of the Navy in 1805. Frequent interruptions and extensive modifications delayed execution of the plan which set the pattern of the Yard’s development for the next decade. Traces of the plan are still found in the Main Gate and Tingey House.

The War of 1812 came and the Navy Yard bustled with activity. On August 24, 1814, the Navy Yard was ordered burned by the Secretary of the Navy to save it from falling into British hands. Tingey House and the Main Gate were spared.

During the next half century the Navy Yard expanded. In August, 1886, a gun factory was established and in June, 1896, the Navy’s first experimental ship model tank was begun. This basin was designed and built under the supervision of Naval Constructor David W. Taylor, (later Rear Admiral and Chief of Construction and Repair).

The Spanish-American War and World War I brought further development to the Washington Navy Yard. The period between World Wars I and II however, saw a gradual reduction of production and then expansion. Production besides that of replacement of guns for the Navy’s ships consisted mainly of spare parts, mounts, sights, gun directors and torpedo tubes. There was some work done in improving the design of broadside mounts for heavy ships, wet mounts for submarines, wind-less gear rings of non-corrosive steel for submarines and in developing a powder-type airplane catapult to replace the compressed air-type being used.

During World War II the Gun Factory became the most important activity at the Navy Yard and, on December 1, 1945, the Washington Navy Yard changed its’ name to the U.S. Naval Gun Factory.

Giant gears used to operate the Panama Canal locks and the first of the famous Watergate Concert Barges, scene of many popular capital concerts and entertainments, were among the items, other than guns, constructed at the Naval Gun Factory.

On July 1st, 1964, the Yard was once again designated the Washington Navy Yard. Headquarters Naval District Washington (formerly Headquarters Potomac River Naval Command) has been located in the Navy Yard since December 1941.