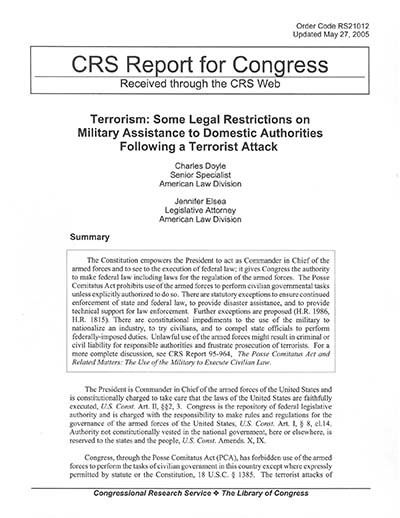 Congressional Research Service, The Library of Congress
Updated May 27, 2005

The Constitution empowers the President to act as Commander in Chief of the armed forces and to see to the execution of federal law; it gives Congress the authority to make federal law including laws for the regulation of the armed forces. The Posse Comitatus Act prohibits use of the armed forces to perform civilian governmental tasks unless explicitly authorized to do so. There are statutory exceptions to ensure continued enforcement of state and federal law, to provide disaster assistance, and to provide technical support for law enforcement. Further exceptions are proposed (H.R. 1986, H.R. 1815). There are constitutional impediments to the use of the military to nationalize an industry, to try civilians, and to compel state officials to perform federally-imposed duties. Unlawful use of the armed forces might result in criminal or civil liability for responsible authorities and frustrate prosecution of terrorists. For a more complete discussion, see CRS Report 95-964, The Posse Comitatus Act and Related Matters: The Use of the Military to Execute Civilian Law.

Congress, through the Posse Comitatus Act (PCA), has forbidden use of the armed forces to perform the tasks of civilian government in this country except where expressly permitted by statute or the Constitution, 18 U.S.C. § 1385. The terrorist attacks of

September 11, 2001, prompted some calls for the increased use of the military to fight terrorism. While the USA PATRIOT Act (P.L. 107-56) broadened the permissible circumstances for the use of the military to assist law enforcement agencies in countering terrorism, Congress also reaffirmed its determination to maintain the principle of the posse comitatus law, 6 U.S.C. § 466.

Statutory Exceptions to the PCA

Congress has provided the President with the authority to use military force to enforce the law under a number of different circumstances. The President has explicit statutory authority to use military personnel to suppress insurrection or to overcome obstructions to or interference with the enforcement of federal or state law, 10 U.S.C. §§ 331 to 333; and to grant the request of a state governor to use military resources to perform emergency work for 10 days following a major disaster (with 75% of the cost to be borne by the federal government), 42 U.S.C. § 5170b.

If the Attorney General and the Secretary of Defense jointly determine that an emergency exists involving chemical or biological weapons of mass destruction, the Secretary of Defense may provide resources and personnel to assist civil authorities, 10 U.S.C. § 382, subject to reimbursement, where such assistance is necessary for the enforcement of sections 175 (prohibiting biological weapons) or § 2232c (repealed, should probably refer to § 2232a - prohibiting the use of certain weapons of mass destruction) of title 18, U.S. Code. However, military personnel may not make arrests, participate directly in searches or seizures of evidence, or participate directly in intelligence collection for law enforcement purposes, unless such action is necessary for the immediate protection of human life and cannot be accomplished by law enforcement personnel, 10 U.S.C. § 382(d)(2). Forms of assistance authorized under section 382 include the operation of equipment to monitor contain, disable, or dispose of the weapon

The corresponding authority for the Attorney General to request military assistance is found in 18 U.S.C. § 2332e. Unlike 10 U.S.C. § 382, however, the provision is not limited to emergencies involving chemical and biological weapons, but was amended in the PATRIOT Act (P.L. 107-56, § 104) to cover all weapons of mass destruction, which are defined in 18 U.S.C. § 2332a to include:

(B) any weapon that is designed or intended to cause death or serious bodily injury through the release, dissemination, or impact of toxic or poisonous chemicals, or their precursors;

(C) any weapon involving a disease organism; or

(D) any weapon that is designed to release radiation or radioactivity at a level dangerous to human life.

(A) any explosive, incendiary, or poison gas - (i) bomb, (ii) grenade, (iii) rocket having a propellant charge of more than four ounces, (iv) missile having an explosive or incendiary charge of more than one-quarter ounce, (v) mine, or (vi) device similar to any of the devices described in the preceding clauses;

(B) any type of weapon (other than a shotgun or a shotgun shell which the Secretary finds is generally recognized as particularly suitable for sporting purposes) by whatever name known which will, or which may be readily converted to, expel a projectile by the action of an explosive or other propellant, and which has any barrel with a bore of more than one-half inch in diameter; and

The Attorney General also has authority to request military assistance in enforcing the prohibition of transactions involving nuclear materials, 18 U.S.C. § 831. Section 831 proscribes, inter alia, the intentional unauthorized receipt, possession, use, transfer, alteration, disposal or dispersal of any nuclear material or nuclear byproduct material that the defendant knows is likely to cause the death or serious bodily injury to any person, or substantial damage to property or to the environment. The Attorney General may ask the Secretary of Defense for the assistance of any DoD personnel in accordance with chapter 18 of title 10, 18 U.S.C. § 831(d), or, in case of an emergency as determined by the Attorney General and Secretary of Defense, may request military assistance "notwithstanding [the Posse Comitatus Act]." Assistance under § 831 (probably meaning subsection (e) only) includes the authority to arrest persons and conduct searches and seizures, as well as "such other activity as is incidental to" its enforcement or to protect persons or property from the proscribed conduct. 18 U.S.C. § 831(e). The Secretary of Defense may require reimbursement as a condition of assistance, 18 U.S.C. § 831(e)(4). (This last provision should probably be read to apply only to assistance under subsection (e); reimbursement of assistance under subsection (d) is likely meant to be controlled by 10 U.S.C. § 377.)

Finally, it is arguable that Congress' authorization for the use of force against terrorists responsible for the September 11 attacks, P.L. No. 107-40, 115 Stat. 224 (2001), has mooted some of the limitations on the use of the military for law enforcement purposes by recasting them as military operations. For example, the arrest and rendition of terrorist suspects abroad for trial in the United States has been unnecessary, as such persons have instead been transported to the military detention facilities at Guantanamo Bay, Cuba, where they may eventually be tried by military commissions. By treating suspected terrorists as "enemy combatants" rather than criminals, the Administration could assert that their treatment is a matter for the military rather than law enforcement agencies, even for persons found within the territory of the United States. See Padilla ex rel. Newman v. Bush, 233 F.Supp.2d 564, 588 (S.D.N.Y. 2002), rev'd in part 352 F.3d 695 (2d Cir. 2003); see also CRS Report RL31724, Detention of American Citizens as Enemy Combatants.

Legislation in the 109th Congress. H.R. 1986 would, upon the determination of the Secretary of Homeland Security that the assignment of troops is necessary to respond to a threat to national security, authorize members of the Armed Forces to assist the Bureau of Border Security and the Bureau of Citizenship and Immigration Services of the Department of Homeland Security, to prevent the entry of terrorists, drug traffickers, and illegal aliens into the United States. It would also authorize military assistance to the Customs Service in the inspection of cargo, vehicles, and aircraft and to prevent the entry of weapons of mass destruction or their components, prohibited narcotics or drugs, or other terrorist or drug trafficking items. The Secretary would be empowered to establish ongoing joint task forces to carry out these activities. Military members would first have to undergo training in issues related to law enforcement in border areas, would have to be accompanied by civilian law enforcement officers while carrying out the authorized duties, and would not be permitted to conduct searches, seizures, or arrests. H.R. 1986 passed the House as section 1035 of the National Defense Authorization Act for Fiscal Year 2006 (H.R. 1815), but without a limitation that would have ended the authority after September 30, 2007.

Inherent Presidential Authority to Use Troops to Enforce the Law

The questions of the President's authority to act in the absence of an explicit statutory exception remain unresolved. The PCA aside, it appears that the President may not use the military to:

Restrictions on use of the National Guard (until federalized) are a matter of state law which varies from jurisdiction to jurisdiction.