A Guide to Locating Sources 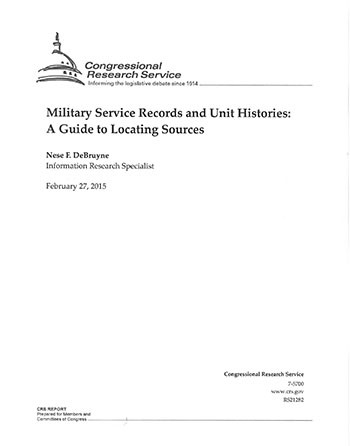 Informing the legislative debate since 1914

CRS REPORT
Prepared for Members and
Committees of Congress

This guide provides information on locating military unit histories and individual service records of discharged, retired, and deceased military personnel. It includes contact information for military history centers, websites for additional sources of research, and a bibliography of other publications.

This report will be updated as needed.

The National Personnel Records Center (NPRC), Military Personnel Records, holds most existing military personnel, health, and medical records of discharged and deceased veterans of all services from World War I to the present. Personnel records may be requested online (http://www.archives.gov/veterans), by mail (the appropriate address listed on the back of the form), or fax (314-801-9195) using the Standard Form 180.

In 1973, a disastrous fire at NPRC destroyed approximately 16 million to 18 million Army and Air Force official military personnel files. In such cases where files were lost, NPRC uses alternate sources of information to respond to requests.

More information about obtaining military personnel files can be found on the NPRC websitehttp://www.archives.gov/st-louis/military-personnel/, or by contacting the center at

Older military personnel records (generally prior to 1917) are located at

The Modern Military Records office of the National Archives and Records Administration (NARA) has custody of records relating to World War I, World War II, Korea, and Vietnam. The records vary by conflict and branch of service. The records for Army units active during the interwar periods (1920-1939 and 1945-1950) are incomplete. For more information, contact the Textual Records office at National Archives and Records Administration - College Park, 8601 Adelphi Road, College Park, MD 20740-6001; telephone 301-837-3510. Online contact information is available at http://www.archives.gov/contact/.

Certain published unit histories can be found in the collections of the Library of Congress or the military history center of each U.S. military branch (see Table 1).

Veterans History Project at the Library of Congress
The project collects, preserves, and makes accessible the personal accounts of American war veterans.
http://www.loc.gov/vets/

Beers, Henry Putney. The Confederacy: A Guide to the Archives of the Government of the Confederate States of America. Washington: National Archives and Records Administration, 1998.

Center of Military History. Order of Battle of the United States Land Forces in the World War.

U.S. War Department. The War of the Rebellion: A Compilation of the Official Records of the Union and Confederate Armies. Washington: GPO, 1880-1901. 70 v.

An earlier version of this report was authored by Julissa Gomez-Granger and Anne Leland.