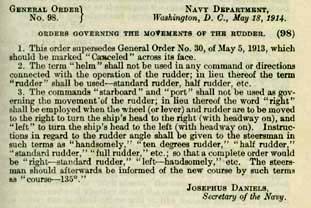 2. The term "helm" shall not be used in any command or directions connected with the operation of the rudder; in lieu thereof the term "rudder" shall be used--standard rudder, half rudder, etc.

3. The commands "starboard" and "port" shall not be used as governing the movement of the rudder; in lieu thereof the word "right" shall be employed when the wheel (or lever) and rudder are to be moved to the right to turn the ship's head to the right (with headway on), and "left" to turn to turn the ship's head to the left (with headway on). Instructions in regard to the rudder angle shall be given to the steersman in such terms as "handsomely," "ten degrees rudder," "half rudder," "standard rudder," "full rudder," "left—handsomely," etc. The steersman should afterwards be informed of the new course by such terms as "course—135°."


JOSEPHUS DANIELS,
Secretary of the Navy.