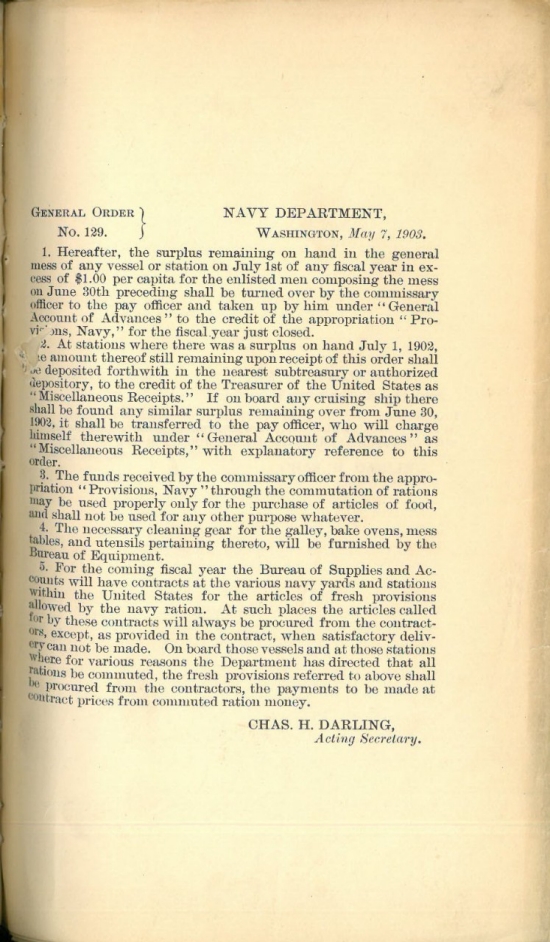 1. Hereafter, the surplus remaining on hand in the general
mess of any vessel or station on July 1st of any fiscal year in ex-
cess of $1.00 per capita for the enlisted men composing the mess
on June 30th preceding shall be turned over by the commissary
officer to the pay officer and taken up by him under "General
Account for Advances" to the credit of the appropriation "Pro-
visions, Navy," for the fiscal year just closed.

2. At stations where there was a surplus on hand July 1, 1902,
the amount thereof still remaining upon receipt of this order shall
be deposited forthwith in the nearest subtreasury or authorized
depository, to the credit of the Treasurer of the United States as
"Miscellaneous Receipts." If on board any cruising ship there
shall be found any similar surplus remaining over from June 30,
1902, it shall be transferred to the pay officer, who will charge
himself therewith under "General Account of Advances" as
"Miscellaneous receipts," with explanatory reference to this
order.

3. The funds received by the commissary officer from the appro-
priation "Provisions, navy" through the commutation of rations
may be used properly only for the purchase of articles of food,
and shall not be used for any other purpose whatever.

4. The necessary cleaning gear for the galley, bake ovens, mess
tables, and utensils pertaining thereto; will be furnished by the
Bureau of Equipment.

5. For the coming fiscal year the Bureau of Supplies and Ac-
counts will have contracts at the various navy yards and stations
within the United States for the articles of fresh provisions
allowed by the navy station. At such places the articles called
for by these contracts will always be procured from the contract-
ors, except, as provided in the contract, when satisfactory deliv-
ery can not be made. On board those vessels and at those stations
where for various reasons the Department has directed that all
rations be commuted, the fresh provisions referred to above shall
be procured from the contractors, the payments to be made at
contract prices from commuted ration money.