Orders Governing the Movement of the Rudder: General Order No. 30, 5 May 1913 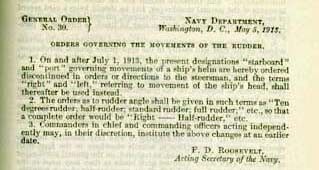 Image of General Order No. 30 (1913) Orders Governing the Movements of the Rudder


1. On and after July 1, 1913, the present designations "starboard" and "port" governing movements of a ship's helm are hereby ordered discontinued in orders or directions to the steersman, and the terms "right" and "left," referring to movement of the ship's head, shall thereafter be used instead.

2. The orders as to rudder angle shall be given in such terms as "Ten degrees rudder; half-rudder; standard rudder; full rudder;" etc., so that a complete order would be "Right--Half-rudder," etc.

3. Commanders in chief and commanding officers acting independently may, in their discretion, institute the above changes at an earlier date.