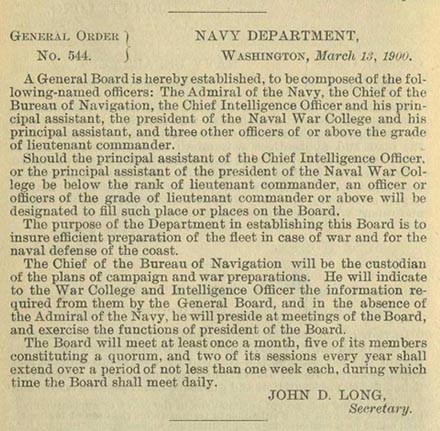 The purpose of the Department in establishing this Board is to insure efficient preparation of the fleet in case of war and for the naval defense of the coast.

The Chief of the Bureau of Navigation will be the custodian of the plans of campaign and war preparations. He will indicate to the War College and Intelligence Officer the information required from them by the General Board, and in the abscence of the Admiral of the Navy, he will preside at meetings of the Board, and exercise the functions of president of the Board.

The Board will meet at least once a month, five of its members constituting a quorum, and two of its sessions every year shall extend over a period of not less than one week each, during which time the Board shall meet daily.