GAf (German Air Force, Luftwaffe] and the Invasion of Normandy - 1944 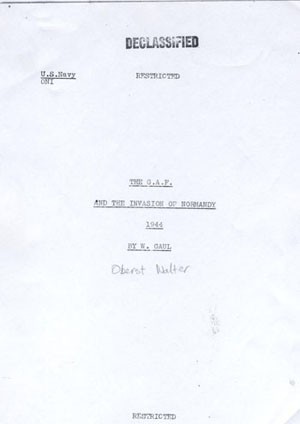 THE G.A.F.
[German Air Force, Luftwaffe]
AND THE INVASION OF NORMANDY
1944

The following work is a study of the part played by the G.A.F. (Luftflotte 3) in the invasion of Normandy from the beginning of April, 1944, until the allied breakthrough near Avranches on 1 August. It deals exclusively with the air force and merely refers to army operations in the field, where interpretation of the narrative demands.

* All based on German Sources.

For operational purposes the above-mentioned units were grouped together as follows:

* Those figures denote the "establishment strength".

**Documents regarding high-level conferences between the Air Force and Supreme Command, Armed Forces, or Hermann Goering and Hitler were not available. The statement is based on notes made by the Liaison Officer of the Navy on the G.A.F. Operational Staff Luftwaffenfuehrungsstab) and on the writer's personal knowledge.

During this stage of the war the German air units had, decreased in strength from 400 early in the year to an average of 100-140 aircraft; losses amounted to 8 to 10. During May the G.A.F. raided Bristol, Portsmouth and neighboring coastal waters, as well as Torquay and Falmouth. The formations showed a further marked decline of between 50 to 100 aircraft.

It was therefore extremely probable, given satisfactory weather conditions, that the allies would invade.

The invasion had begun, the order "imminent danger West" went out from the Supreme Command West at midday of 6 June.

No description of the German situation would be complete without a general outline of allied operations in the invasion area.

Due to the allied air supremacy, the fighters' main task was defense of the army's supply lines, for only by concentrated operations were the German units enabled to maintain mobility on land for a limited period. The already unfavorable situation deteriorated visibly, particularly after 10 June, when the Allies succeeded in securing a first airfield on the bridgehead for fighter operations. From then on, if the weather was good and large-scale allied sorties were reported, German fighters could not go up. Losses amounted to 2 to 3 aircraft out of every 10.

aircraft of Ju 88 successfully attacked a convoy in the Portland Bill area. In addition to operations against ship targets in the extensive region of the Seine bay and the Channel area, attacks on vessels unloading at and near the bridgeheads took place daily.

Observation during these nightly sorties was very difficult. Numerous searchlights, concentrated anti-aircraft fire and smoke cover over the target areas, precluded all possibility of successful observation. The reports of the crews were therefore treated with caution. Luftflotte 3 claimed the following successes in the first days:

Actual results, however, by no means tallied with these reports, being considerably lower. Contemporary British sources (War at Sea Vol. V) mention the following sinkings by the Luftflotte:

On 6 June the frigate Lawford

On 13 June the destroyer Boadicea by air torpedo.

Damaged: On 7 Juno HMS Bulolo and the cruiser Eucrates. Losses of small craft are not reported.

continued unabated. On 13 June, they were concentrated south of Carentan, and on the 14th, fighting became heavier in the Caumont area, with the aim of encircling Caen from the west. Other focal points developed on both sides of the Bayeu--St. Lô road in the direction of St. Lô. and it was attempted to cut off the Cotentin peninsula by westerly attacks from the Carentan.

By 15 June, according to German calculations, the Allies had 23 to 25 divisions on the bridgehead.

During the ensuing period there was a lull in the fighting around the mouth of the Orne tout pressure in the west for the purpose of cutting off Cotentin was maintained. The decisive event of 15 June was that the Allies broke through the German front near St. Sauveur le Vicomte westward. On reaching the west coast at Barneville on 18 June, the Allies achieved their objective and sealed off Cherbourg to the south. On the evening of 19 June, Cherbourg received its first bombardment from the land; on the 23rd the Allies made deep penetrations in the direction of the fortress and by 29 June harbor and town were occupied by American troops.

Before the close of the battle for Cherbourg, the Allies were already attempting [the] capture of Caen.

harbor and dock installations at Boulogne.

According to the records of the German aircraft reporting service, allied sorties by day between 6 June and 1 July, 1944, totaled

*The question of release of the pressure-mine for G.A.F. use in the invasion area is discussed elsewhere by Vice-Admiral Weichold.

Sorties of torpedo aircraft and bombers on the nights of the 15th, 19th, 23rd and 25th June were regarded as particularly successful.

The above successes are not, however, confirmed by British sources. Subsequent air force successes were the sinking by aerial torpedo of the British coaster Albert C. Field, 1,470 G.R.T., and damage done to the destroyer Onslow and the frigate Nith.

In contradiction to the German report of 1 July from Supreme Command, Armed Forces, regarding 51 allied ships of 313,000 G.R.T. sunk and 56 damaged totaling 328,000 tons, the British figures mention a total of 17 allied ships and transports amounting to 80,034 G.R.T.* Many of these losses were caused by mines and may thereforebe regarded as Air Force successes (see Appendix 1).

During the same period, units of Luftflotte 3 and of the 1st Jagdkorps (fighter Korps) shot down 414 aircraft (by day fighter), 219 aircraft (by night fighter) and 672 aircraft (by A.A. fire) over the occupied western territories. This total of 1,305 aircraft shot down compares with German losses of 458 fighters, fighter bombers and reconnaissance planes, 224 bombers, 7 supply planes and 137 destroyed on the ground, totaling 826 aircraft, added to which 86

*Difficult conditions of night observation may explain the surprising unreliability of G.A.F. reports.

aircraft were heavily, and 126 lightly damaged.

The return to Portsmouth on the afternoon of 30 June of the Naval Commander Eastern Task Force closed the second phase of the invasion of Normandy. The army's position appeared so secure that as in the case of the former landings in North Africa, Sicily and Italy, the Allied Fleet was now concerned only with the routine provision of regular supplies.

1 transport, 2 further vessels and a number of landing craft and barges were reported damaged.

In reality, the results for July also were much more modest. War at Sea quotes the following losses due to G.A.F. action with torpedoes or bombs:

Continued mining operations, by Korps IX constituted a much graver threat to the Allies at sea. In July 1,644 L.M.B. and 993 BM 1000 were laid. It was only thanks to the keen and tireless work of the minesweeper squadrons that the Allies were able to keep German successes down to a comparatively low figure. Not a single capital ship was sunk and the losses and damage caused to transport in no way affected the progress of the invasion operation according to plan (see Appendix 2 for mine losses).

N. A. Lo-do-
Ther German Naval Defense
Against the Allied Invasion of Normandy 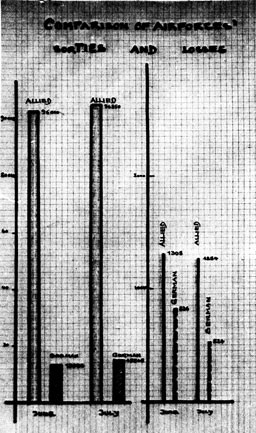 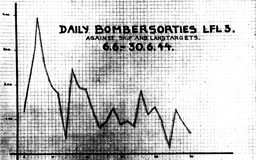 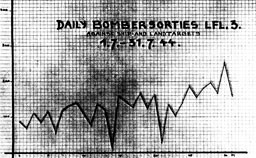 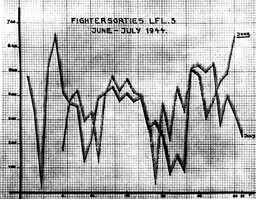 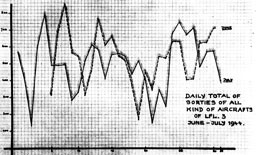 Appendix 7 - Daily Total of Sorties of All Kinds of Aircraft of LFL 3 June-July 1944. 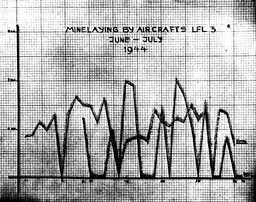 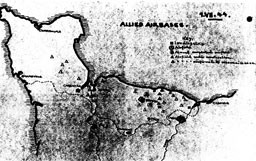 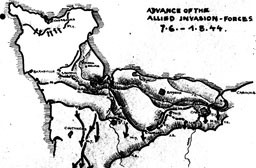 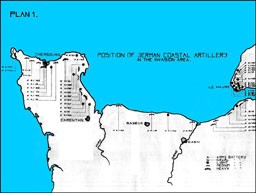 Plan 1. - Position of German Coastal Artillery in the Invasion Area. 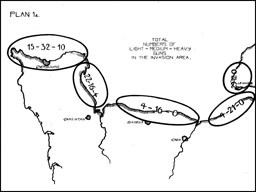 Plan 1a. - Total Numbers of Light-Medium-Heavy Guns in the Invasion Area. 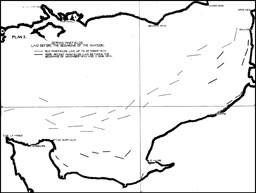 Plan 2. - German Minefields Laid Before the Beginning of the Invasion. 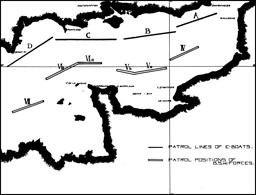 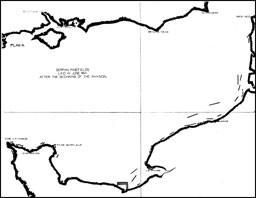 Plan 4. - German Minefields laid in June 1944 after the Beginning of the Invasion. 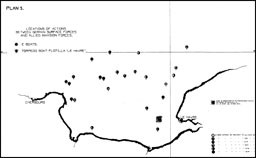