A Soldier’s Guide to Bosnia-Herzegovina was produced by Headquarters, U.S. Army Europe, Office of the Chief of Public Affairs and is published as a Command Information booklet. 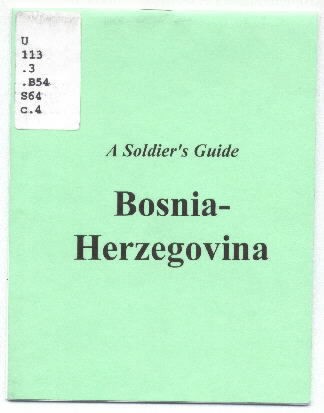 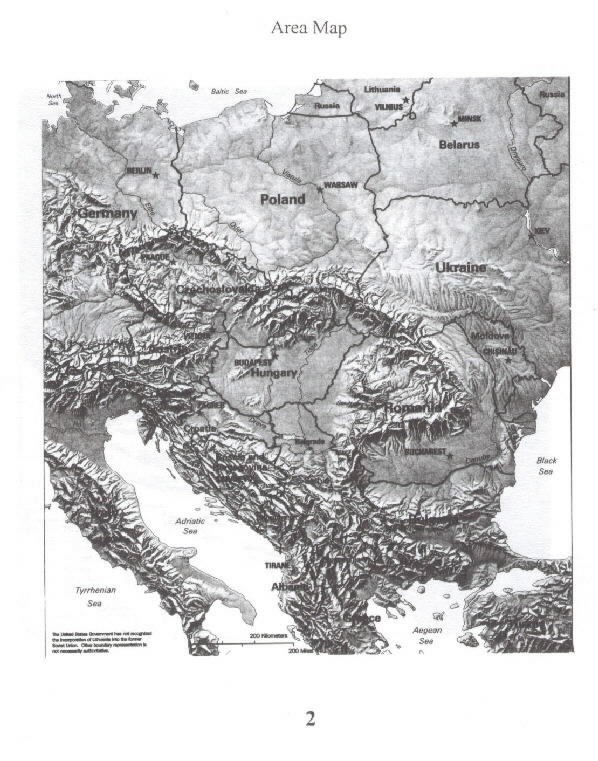 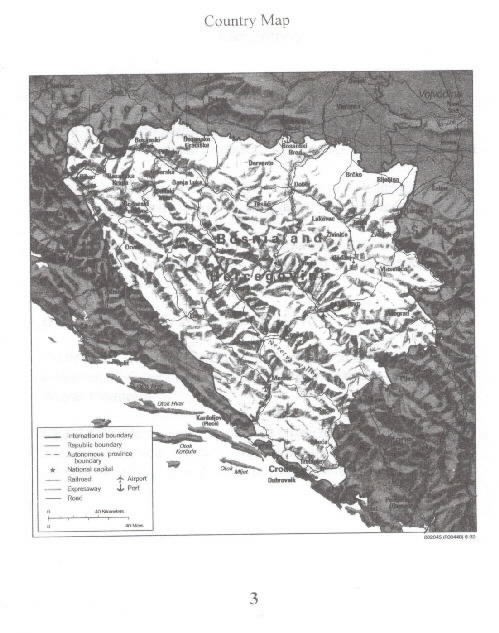 Location: On the Balkan Peninsula in the southeast corner of Europe. Bosnia-Herzegovina shares borders to the west and north with Croatia, with Serbia to the east and Montenegro to the southeast. It has a short western coastline - 12 miles - on the Adriatic Sea.

Size: It covers about 19,741 square miles (51,129 square kilometers) - which makes it slightly larger than Tennessee.

Terrain: The northern part is mountainous and covered with thick forests. The southern part is composed largely of rocky hills and flat farmland.

Capital: The capital of Bosnia-Herzegovina is Sarajevo, with an estimated 1993 population of 383,000. It was the site of the 1984 Winter Olympics.

Climate: Hot summers and cold winters, with a steady rainfall throughout the year. Areas of high elevation have short, cool summers and long, severe winters; mild winters along the coast.

Languages: Bosnian, Croatian and Serbian are the different names for the same spoken language used by most of the population (commonly referred to as Serbo-Croatian); there are some differences between pronunciation and usage. Two different alphabets are used: the Serbs use the Cyrillic script like Russian; the Croats and Bosnians use a Roman script.

Economy: Ranked next to the Former Yugoslav Republic of Macedonia as the poorest republic in the old Yugoslav federation. Although agriculture has been in almost all in private hands, farms have been small and inefficient, and the republic has traditionally been a net importer of food. Industry has been greatly overstaffed, one reflection of the rigidities of Communist central planning and management. Bosnia-Hercegovina hosted a large share of Yugoslavia’s defense plants. Interethnic warfare in the last three years has caused production to plummet, unemployment and inflation to soar. The country receives substantial amounts of humanitarian aid from the international community.

Bosnia-Herzegovina was part of the Roman Empire during the first centuries of the Christian era. After the fall of Rome, the area was contested between Byzantium and Rome’s successors in the West. By the 7th century A.D. it was settled by the Slavs. The 9th century saw the establishment of the neighboring kingdoms of Serbia and Croatia. In the 11-12th centuries, Bosnia came under the authority of the Kings of Hungary.

Around 1200 A.D., Bosnia fought for and gained its independence. In the 14th century, the Ottoman Turks embarked on their conquest of the Balkans. The provinces of Bosnia-Herzegovina formed part of the Turkish (Ottoman) Empire for almost 400 years before the annexation to the Austro-Hungarian Empire in 1878. The population of the provinces was composed of an ethnic mixture of Orthodox Serbs, Roman Catholic Croats and Muslims (mainly Bosnian Slavs who had converted to Islam).

Austria-Hungary attempted to end Serbian expansionism in 1914 by declaring war on Serbia; this conflict was to escalate into the First World War. Dec. 4, 1918, the Kingdom of Serbs, Croats, and Slovenes was proclaimed when the Serbs and Croats agreed with other ethnic groups to establish a common state under the Serbian monarchy. The provinces of Bosnia-Herzegovina formed part of the new kingdom. Bitter disputes ensued between Serbs and Croats, however, and in January 1929 King Alexander imposed a dictatorship, changing the name of the country to Yugoslavia.

During the second World War, Josip Broz Tito’s partisans, who were from a variety of ethnic groups, dominated most of Bosnia-Herzegovina, waging war against invading German and Italian troops, the Ustasa regime in Croatia and the Serb-dominated Chetniks. After the war, Bosnia Herzegovina became one of the six constituent republics of the Yugoslav federation.

In the 1960s, Tito increased Muslim representation in Bosnia-Herzegovina. In 1971 Slav Muslims were granted a distinct ethnic status. With Tito’s death in 1980, it became increasingly difficult to keep together the six federal republics comprising Yugoslavia.

As Yugoslavia disintegrated, Bosnian Muslims and Bosnian Croats attempted to create an independent Bosnia-Herzegovina, but the Bosnian Serbs opposed it. In the spring of 1992, independence was declared and officially recognized by the international community. However, the Bosnian Serbs created their own separate Serbian republic within Bosnia-Herzegovina and removed their members from the government.

In 1992, the Bosnian Serbs, assisted by the Federal Army of Serbia, attempted by carve out land for itself within Bosnia. The Federal and Bosnian Serb armies under General Ratko Mladic, aided by paramilitary groups, began seizing territory in northern and eastern Bosnia, expelled much of the non-Serb population, and engaged in ethnic cleansing, in which intimidation or violence were used to remove all members of other ethnic groups from the area. They also laid siege to Savajevo. At the same time, a large group of Bosnian Croats decided to break away, taking most of the remaining territory in Bosnia to form a union called Herceg-Bosna. This led to fighting between formerly allied Bosnian Croats and Bosnian Muslims.

In 1992, the UN [United Nations] imposed economic sanctions and sent approximately 8,000 UNPROFOR [United Nations Protection Force headquartered in Zagreb, Croatia] troops to protect noncombatants and the safe zones. The UN also demanded Bosnia remain a single country and not be partitioned into three separate, ethnically pure states. This UN policy was incorporated into the Vance-Owen peace plan, but was rejected by the Bosnian Serbs. Later that year, the UN came up with the Owen-Stoltenberg plan (almost opposite to the former UN plan), which was rejected by the Bosnian Muslims.

As the atrocities and casualties continued to mount, the UN Security Council in June 1993 agreed upon a resolution. It called for the deployment of up to 25,000 additional UN soldiers and gave them the mandate to use force to defend safe areas. Several cease-fires were also negotiated, but were quickly violated. Due to UN sanctions, the Federal Army withdrew all official support from the Bosnian Serbs.

In February 1994, during one of the cease-fires, the Croatian and Bosnian governments resumed their alliance and formed a Joint Federation to oppose the Serbs. In May 1994, the United States, France, Britain, Germany, and Russia (the Contact Group) endorsed a plan to leave 51 percent of Bosnia under control of the new Bosnian-Croat Federation, while awarding 49 percent to the Bosnian Serbs. The Bosnian Serbs rejected this plan and continued their attacks.

In 1994 it was estimated that, since the beginning of the civil conflict in Bosnia-Herzegovina, more than 200,000 people had been killed and many more wounded, while more than 2.7 million people (about 60 percent of the pre-war population) had been displaced.

Following NATO airstrikes and attacks by the combined Bosnian Muslim and Croatian armies in the late summer and early fall of 1995, the Bosnian Serbs again considered the peace plan. A cease-fire was declared Oct. 12, 1995, to be followed by peace talks whose objective is to negotiate a final peace plan. Once this plan is signed by all warring factions, NATO and other military forces will establish a peace implementation force in Bosnia-Herzegovina.

Before the current crisis, the warring factions were part of the Yugoslav National Army (JNA). 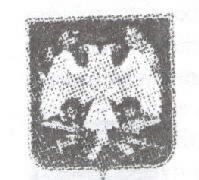 Federal Republic of Yugoslavia (JA) came into being in May 1992. It is made up of two-thirds of the former Yugoslav National Army and is subordinate to the Yugoslav government. The JA has 250,000 men, 800-900 tanks, 740 APCs and 1,400 field guns and howitzers. 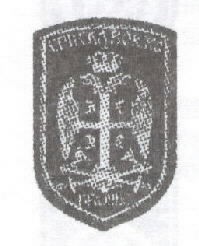 Bosnian Serb Army (BSA) comprises 85,000 troops and uses heavy weapons to compensate for lack of manpower. It has received support from the JA and can count on large numbers of irregular soldiers often called Chetniks. Ultranationalist paramilitary groups, like Arkan’s Tigers and the White Eagles, also conduct military operations in Bosnia and are suspected of committing some of the worst atrocities of the war. 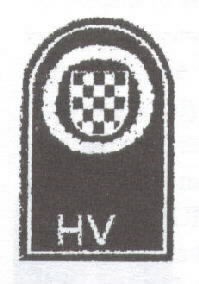 Croatian Army (HV). The Croatian army is divided into three components: the Regular Army, Home Defense Force, and Army Reserve. The Regular Army numbers about 45,000 and is made up mainly of conscripts. The Home Defense Force is about 75,000 men and is formed in each Croatian district, with cities responsible for raising and supplying these units. The Croatian Army Reserve numbers approximately 150,000 men. 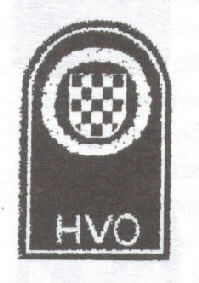 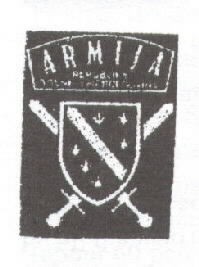 Army of Bosnia-Herzegovina (ABiH). The ABiH was formed from Territorial Defense Forces in Bosnia-Herzegovina and numbers approximately 52,000 troops. Historically, it was the least well equipped of the warring factions, but has a large arms and ammunition manufacturing capability. The ABiH is aided by a small number of Mujahadeen and other volunteers from Islamic countries, who are often used for shock troops due to their fundamentalist inspired fanaticism.

Because of the close identification of these ethnic groups with their religion, it is extremely important for outsiders to be sensitive to religious matters and the customs of the country. Always act in a respectful manner when dealing with the local population; do not discuss politics or show partiality to any group; remove headgear in religious buildings; do not take photographs of public buildings or people without first obtaining permission.

Never interrupt when someone is in prayer. Remember, these people are the product of more than 1,000 years of history and culture. They can be easily insulted when they perceive any disrespect of them or their culture. Simply act in a respectful and considerate manner at all times.

The following hand gestures should not be used: the peace sign using the index and middle fingers; and, a three-fingered gesture using the thumb, index, and middle fingers held apart and upright from the palm. The first is an informal greeting used by the Croats, so it would be very offensive to Serbs; the second is a gesture used by the Serbs, so it would be very offensive to Croats and Bosnian Muslims. Either gesture could provoke a violent reaction.

A soldier who is well informed through command information can be an excellent unofficial spokesperson. Reporters want a soldier’s perspective of military operations and seek out soldiers of all ranks and positions. Public affairs staff can assist soldiers prepare for a scheduled interview; however, some reporters will ask spontaneous questions of any soldiers.

· Know who you are talking to. Accredited media will be escorted by public affairs staff or have authorization to operate in the area. Think OPSEC [Operations Security]. When in doubt, call the PAO.

· Listen to the question. If you are unsure of a question, ask the reporter to repeat or clarify it. Take time to think about your answer.

· Be honest. There is nothing wrong with saying “I don’t know” or “I can’t tell you.” However, never lie to a reporter.

· Stay within your responsibility or expertise. Just remember: if you command it, own it or did it, then talk about it. Avoid hypothetical questions.

· Do not discuss classified or sensitive information. If you’re not sure if a topic is sensitive or classified, don’t talk about it.

· Keep your answers brief and to the point. Broadcasters will edit your 30 seconds of comments into a single 3- to 5-second sound bite.

· Relax and be yourself. Reporters are interviewing you because of who you are; do not try to be anyone else.