Chapter 5: The Battle of Midway 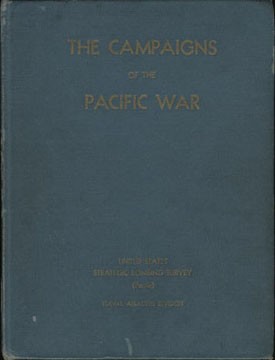 The first phase of the Pacific War, following the neutralization of the United States Fleet at Pearl Harbor, consisted of the swift expansion of the Japanese Empire into the South Pacific and Southeastern Asia and the establishment of a defensive perimeter of island positions to the southeast and to the south. This phase terminated in the seizure of the Dutch East Indies and the acquisition therewith of the resources considered necessary by Japan to sustain her power and position in the Western Pacific.

Immediately after the seizure of the key objectives, the second phase commenced, in which Japan planned to seize additional outposts to guard the newly gained Empire against attack, to consolidate positions and to cut enemy supply lines. This phase included a plan to occupy Midway and the Aleutians in order to establish an outer defense line to the east and northeast of Japan. Occupation of these points was to be followed by establishment of air coverage from these bases to a radius of 1,300 miles, a radius which included the Hawaiian Islands.

The Japanese, aware of the fact that all available United States carrier strength had been present in the distant Coral Sea only three weeks before, designated 6 June 1942 as the date of occupation of Midway Island, and made the following estimate of the United States situation:

Relying on the line determined by our initial operational advance as his first line of defense, the enemy is growing desperate to check his decline as his outer shell crumbles under our successive blows, and as India, Australia and Hawaii become directly threatened. By strengthening and giving an active role to both his aircraft in the Australian theatre and his submarines, roaming under the seas which we command, he conducts guerrilla operations against us. With a striking force he reconnoitered the South and Southwest Pacific Ocean Area. Comparatively speaking, he is displaying remarkably vigorous activity. His morale was not at once shaken by his crushing defeat in the Coral Sea on 7-8 May 1942; and the last 10 days of May saw the sudden return of lively activity throughout enemy areas after our fleet sortie from Hashira Jima; he is paying singular attention to the Australian Area; the time is ripe to strike at Midway and the Aleutians.

United States forces to counter such an attack were relatively weak, but the Japanese intentions were suspected by the United States Command. [*Note: this account was written long before the wildly successful efforts of American cryptanalysts in decrypting the Japanese naval codes was declassified.] Naval losses sustained at Pearl Harbor and in the Battle of the Coral Sea had not been replaced. In view of this deficiency it was decided not to commit the United States surface vessels, but instead to reduce the strength of the Japanese Fleet through attrition, prior to its arrival at the objective, by means of long-range air attack from the three carriers then steaming at top speed from the Coral Sea toward Midway. In addition, the local defenses of Midway were strengthened, a submarine cordon was established, and Marine aircraft squadrons and long-range Army and Navy search planes were concentrated at Midway.

As the Japanese Fleet advanced behind a submarine scouting line with island-based air coverage to the southward and westward, the United States Task Force took up a position to the northeast of Midway.

On 1 and 2 June Midway based aircraft conducted negative searches to a distance of 800 miles to the north and west. However, at 0904 3 June (plus 12 time) a patrol seaplane made the initial contact with the Occupation Force about 500 miles to the southwest of Midway. A B-17 striking group immediately took off to attack the transports but scored no hits. Shortly after midnight the same night one flying boat damaged a transport with a torpedo hit while another strafed the decks of the transport columns.

At 0545 the next morning (4 June) a flying boat reported an enemy air group heading for Midway from the northwest and shortly thereafter sighted the carriers of the enemy striking force.

All planes at Midway were immediately launched. The torpedo planes and B-26's, sent against the enemy carriers, made a heroic but unsuccessful torpedo attack while the Marine fighters, outnumbered four to one, made attempts to turn back the enemy air groups. The Japanese attack severely damaged Island installations including the aviation fuel system, and subsequent fueling operations had to be carried out by hand, thus severely handicapping air operations.

About 0830, against extremely heavy fighter opposition, shore-based Marine dive bombers conducted a bombing attack on the battleships and carriers of the Japanese striking force. Against this same overwhelming opposition an unsuccessful torpedo attack was carried out by the Hornet torpedo squadron. At about 1020 the Enterprise and Yorktown dive-bomber squadrons, protected by their own fighters, carried out a successful dive-bombing attack making three hits on Soryu which was rearming planes preparatory to attacking the United States carriers in lieu of Midway, two hits on Akagi, and four on Kaga. When attacked, Akagi had 40 planes on board and Kaga 30; the latter sank later that afternoon as a result of fire and a delayed fuel tank explosion and at the same time the damaged Soryu was torpedoed and sunk by the submarine Nautilus.

In the meantime, a second aircraft striking group was launched by the enemy including all aircraft from the as yet undamaged Hiryu. This group attacked the United States Task Force, scoring three bomb hits on Yorktown which put her flight deck out of action, and forced her withdrawal from the battle. Three days later, while retiring to the eastward, Yorktown and the destroyer Hammann were sunk by torpedoes from the Japanese submarine I-168.

During the afternoon of the 4th, aircraft from Hornet and Enterprise located Hiryu, the remaining carrier of the striking force which had attempted to escape to the north, and attacked scoring six bomb hits. Damage incurred in this battle by both Akagi and Hiryu was so great that these two vessels became unnavigable and were scuttled by their crews about 0500 on the morning of the 5th.

As a result of the loss of all four aircraft carriers of the striking force, which deprived the invasion fleet of air support, and of a serious collision between the heavy cruisers, Mogami and Mikuma during the night of the 4th, Admiral Yamamoto ordered abandonment of the operation and retirement of all ships.

On the 5th adverse weather conditions prevented United States carrier groups from locating the retreating forces to the north and west of Midway, although a Marine dive bombing group from Midway located the crippled Mogami to the southwest and inflicted additional minor damage to this vessel and Mikuma.

No further contacts were made until the next day when dive-bombers from both Hornet and Enterprise attacked and sank Mikuma and seriously damaged Mogami and the destroyer Arashio.

During this battle, carrier-based dive-bombers made 191 sorties obtaining 32 hits, 15 of which were the principle factors in the destruction of the First Air Fleet carrier force while the remainder sank the Mikuma and damaged the Mogami and Arashio. Although the B-17s of the Seventh Air Force based at

Midway made 62 sorties for horizontal bombing attacks, testimony of Japanese survivors indicates that no hits were scored by this means. The difficulties which attend high altitude bombing of ships were well illustrated when, on the afternoon of the 6th, a flight of B-17s reported sinking a "cruiser" by an attack delivered from over 10,000 feet; in fact, the "cruiser" was a United States submarine which hastily submerged when the first bombs fell off her bow. In contrast to the more experienced carrier dive-bomber pilots, the hastily assembled Marine dive-bombers made 50 bombing sorties but attained very few hits. However the manner in which the Marine attack occupied the fighter defense of the Japanese carriers on the 4th greatly contributed to the hits of the carrier bombers which came in shortly thereafter. Unfortunately both the Army and Navy torpedo attacks against the enemy were made in vain. Approaching without fighter protection, the torpedo groups were attacked and cut to pieces principally by the defending Japanese fighters before they were able to press home their attack.

Consequences of the Battle

As a result of this battle, the Japanese expansion to the east was stopped and Midway Island was saved as an important American outpost. To the Japanese this battle was disastrous. The loss of 4 of their finest aircraft carriers, together with 250 aircraft and some 100 of their first-line pilots deprived them of the powerful striking force with which they had achieved their conquests and with which they had planned to cut down United States efforts to counterattack. Battleships and seaplane tenders were withdrawn from the fleet for hasty conversion into carriers, but all efforts to regain what had been lost were insufficient, and from this date the balance of power in the Pacific shifted steadily to the United States side. In view of the strategic situation at the time and the condition of United States defenses, the carrier action at Midway was perhaps the decisive battle of the war. 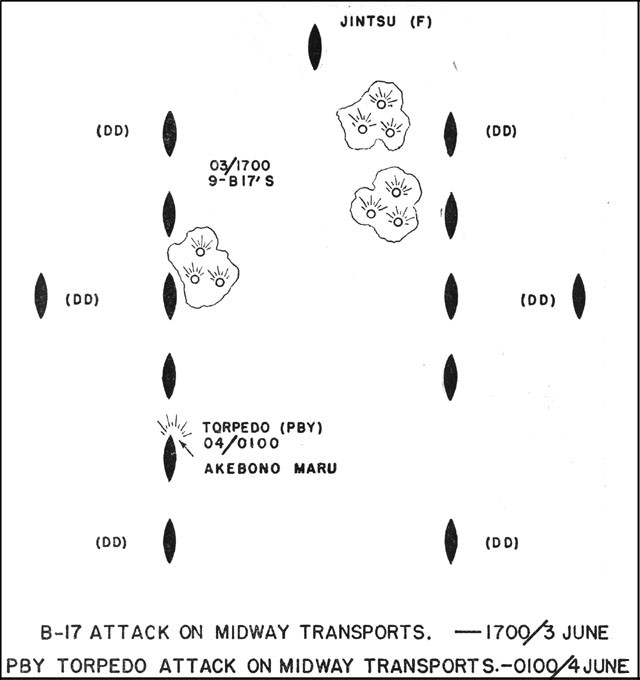 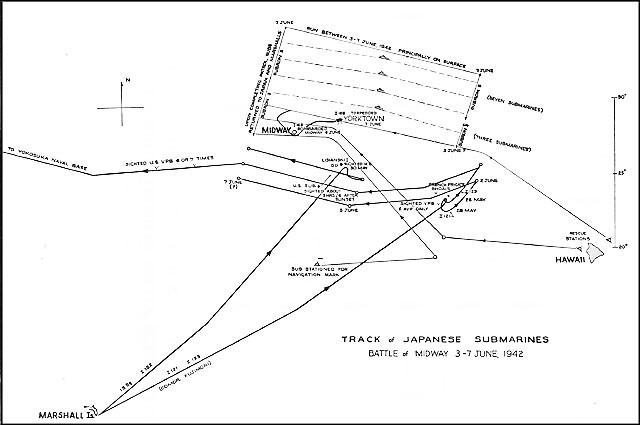 Action Chart of the Battle of Midway
June 5 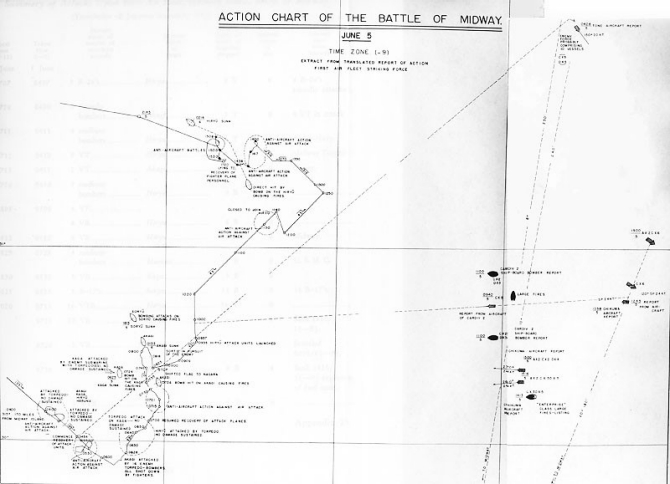