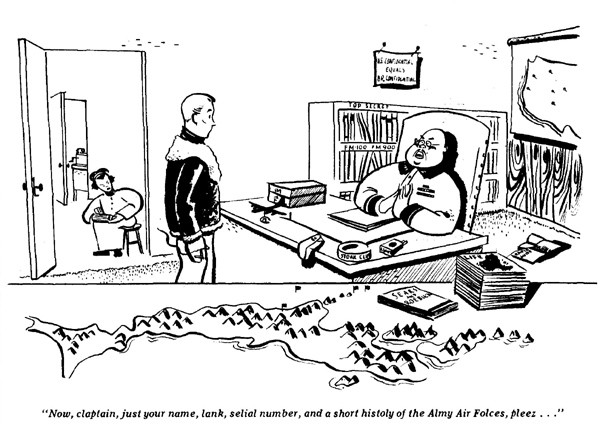 A comprehensive and complete outline for the interrogation of PWs [Prisoner of War] by the Japanese has been captured in Burma and translated by the Southeast Asia Translation and Interrogation Center. The document, labeled “most secret,” was in the form of a pamphlet and covered in detail the information to be obtained from prisoners taken by the Japanese. It thus supplements the documents previously published in this summary on the procedure for interrogation and handling of PWs. (See Informational Intelligence Summary Nos. 44-34, 15 November 1944, and 44-37, 30 December 1944.)

This document reveals the emphasis which the Japanese place on the volume and variety of information that may be obtained by PW interrogation. Political and psychological subjects are among those outlined. In addition, specific and detailed questions about military tactics, operations, intelligence, communications and equipment are included. It is evident that the Japanese appreciate the significance of full and complete knowledge of Allied activities and realize the propaganda value of general information. It is also clear that the enemy appreciates the value of technical details on aircraft and aerial equipment and the importance of minute data on flying tactics and techniques. The proposed plan to secure such an ambitious compilation of data indicates the ability to utilize it and suggests an elaborate enemy intelligence system. It suggests further that the enemy has more than a fleeting conception of the requirements of total warfare.

It is obvious that Jap interrogators who attempt to secure adequate answers to all items set forth in this detailed outline would exhaust both themselves and the PWs. However, knowledge of the information which the enemy intends to secure should alert Allied personnel who might be captured to the detailed system of Japanese interrogation and serve as a warning against the revelation of data, which, though apparently harmless, might fit into the general enemy scheme. An edited copy of the document follows on the next page.

GUIDE TO THE INTERROGATION OF ALL ENEMY RANKS

Personal History. School, date of graduation, general and special subjects; civilian employment, civilian flying experience, civilian communications experience, etc.; military service: volunteered or conscripted and to what unit, layout of training of air personnel, period of training and grade in each branch; date and place of embarkation, method of travel and route, date and place of arrival; name of unit assigned to, combat history.

Circumstances of Capture. Point of departure; name of unit and officer commanding; type and number of aircraft; bombing destination and objective; whether bombing took place, whether target results were confirmed; time of day, place and number of engagements with the Japanese fighters, number shot down and number escaped by parachute, number forced down by ground fire and escaped, whether aircraft were destroyed; degree of damage to aircraft; how many captured by Gendarmes, units or villagers during escape; number of casualties when encountering Gendarmes.

1. The organization of PW’s unit: unit number, name of CO [commanding officer], strength and ranks, strength of air and ground personnel, type and number of aircraft.

4. Armament and equipment: cannon and/or machine guns; capabilities, number and location; type of bombs, power and number; photographic equipment; chemical warfare material, bacteria and poison gas; airfield (or air strip) to which attached: location; area; runways, number and direction; barracks, aircraft field and ammunition dumps and machine shops, concealed power plant, whether exposed, dispersed or concentrated; degree of camouflage; the existence of antiaircraft guns, types, number, position, number and efficiency; type of terrain and vegetation in the surrounding area; how supplies are received, (weapons and material of all types); present strength deployed, number of aircraft, any adjacent airfields or other airfields familiar to prisoners.

5. Distribution of orders: the issuer and originator, appointment, rank and present location; details leading to the issuing of orders; communication channels, details of procedure through various channels leading to actual sorties.

6. Method of communication: documents, sealing and classification of secrecy, special messengers, containers and method of transportation, ranks of messengers and duty officer, whether only one official courier, or assistant courier attached; mail, procedure leading up to consignment of mail to post office, route, distribution, dispatching and receiving of official documents and certificates; wireless, time, frequency, wave length (frequency) whether codes, alphabet or plain language; codes, type, form construction and decoding.

8. Details of fixing routes: whether the route is always changing; whether they fly by observing the ground or by compass; whether they receive orders concerning their routes or other matters after take-off.

9. Bombing: details of bombing run, whether anything is selected as a course to the objective at night; degree of visibility of a pagoda or creek; how signal lights are used at night and their value; how reflecting signals are used when there are clouds and their values; details of plans of bombing, sightings of targets and the releasing of bombs, system of command of the originator of the order to release bombs and his orders; types of bombs carried (instantaneous, delayed-action or time bombs) number carried, mass release or individual release, etc.; relation between type of bombs selected and the targets; observation of results of bombing, why bombing was done at the altitude of 26,000 feet (the greater the altitude, the fewer the chances or fixing, aiming at and hitting the target).

10. Reconnaissance aircraft: whether reconnaissance results can be obtained at an altitude of 23,000 to 26,000 feet; kinds and methods of reconnaissance; types of photographs, technique aspects and efficiency of equipment used, whether ordinary or special material; whether there is a radio set, kind of language, method of communication with accompanying aircraft, with control and with base; communication between bombers.

b. Details of communication with the rear: signals data; call sign, wave length (frequency and changes of frequency) and times; method of communication; codes, ordinary words or radio; the distinction between intercommunication and giving orders; directivity.

d. Message pick-up: its value and training; usage in battle.

1. On the enemy: Japanese ground- and air-defense installations; types of Japanese aircraft, number and whether security measures at present in operation; targets for bombing.

3. Bombing results: results of direct hits on targets; frequency with which bombs are dropped on the same target; consideration and confirmation of results.

4. Method of Collecting: directly by reconnaissance aircraft; reports of spies dropped by parachute; reports by local spies and spies that go back and forth; channels and means of transporting information; disposal of reports and photographs by spies and their arrangement for utilization

1. Operations: disposition of organization; whether the Allied Armies are on the offensive or defensive; present and future plans of operations; bases and direction; duty of each unit; state of air and ground defenses in vital cities and important military installations; system, organization and details of issuing alarms; number of positions of observer posts; number and positions of searchlight units; duties during air raids; taking shelter; state of affairs when there is a direct hit; effect on civilians; strength of personnel protecting vital positions.

b. Training of spies: system; name, place and organization; names and particulars of instructing officers; details of training; theoretical and technical training (wireless, cameras, invisible inks); personnel at present in training and their numbers; plans for future use of spies, objectives, positions, methods of infiltration.

AC/AS, Intelligence [Assistant Chief of Staff, War Department (US) (Intelligence)], Comment: the attention which the Japanese gave to questions on these subjects indicates the possible emphasis which the enemy place on their own methods of espionage and infiltration.)

Opinion on the War. What are you fighting for (for the President, for the people, for the Jewish plutocracy, for justice, against injustice)?; cause of the outbreak of war; personal opinion on how his country became involved in the war; extent of perception by officers and men in general, their morale, distaste for war and their hopes of peace, whether they are anti-war and anti-army (for instance, the labor disputes in the mining industry in the United States); other opinions on morale, etc.

1. The morals and discipline of the Allied Forces; the unity of all ranks; the problem of desertion, obedience of orders; desire to return home; complaints of the discontented and enmity towards the enemy.

2. The compatibility of the American and the British units (congenial or hostile).