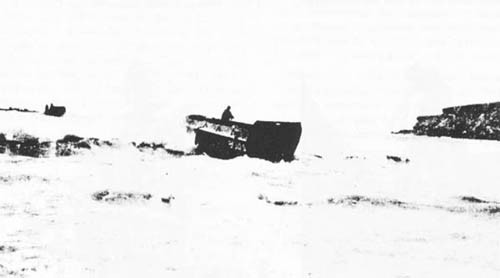 Retracting Through The Surf

Modern wars are fought by machines, tanks, cannon, airplanes, and motor transport have made the land army of today a force of trained specialists. So highly specialized is the American Army that only about one man in four goes into the infantry. The other three are artillerymen, signal corpsmen, engineers--technicians of every variety, and even the infantryman is trained for some particular billet requiring special skills.

In the Navy the situation usually is even more complicated. Practically every man with the fleet has at least one assignment, and frequently has several responsibilities which demand long training and practice. As a result, many Navy men know a great deal about their rate or specialty but frequently know relatively little about the work of other rated men and strikers. In a sense the seamen and petty officers learn more and more about a specialized field and have less and less contact, in many instances, with the workings of the Navy as a whole.

Fortunately, the preceding statement does not hold true in the amphibious forces. The men in "amphib" are expected to master a broad field of nautical knowledge and become acquainted with the work usually done in several rates. The alert, curious sailor will find the task of manning the LCVP varied and stimulating. He will discover that seamanship, boat handling, some engineering, a knowledge of signalling and communications, gunnery, navigation, and weather lore are all fields in which he must have some knowledge. In a word, the capable boat crew member must be versatile.

Finding your place in a boat crew. As one of the men who operate the LCVP or LCM(3) you have several broad responsibilities, regardless of whether you are coxswain, engineer, deckhand, or signalman. First, you are responsible for the safety of the boat and the lives of the crew and any men who may be aboard as passengers on a run to the beach. Second, it is important to do your share to make an amphibious operation succeed. Each such operation's success is built upon the individual performance of many small boats--yours among them. The safe discharge of many loads of cargo at the proper places, and quickly, is vital. Third, military duties aboard a transport must be done well, willingly, and with rapidity. 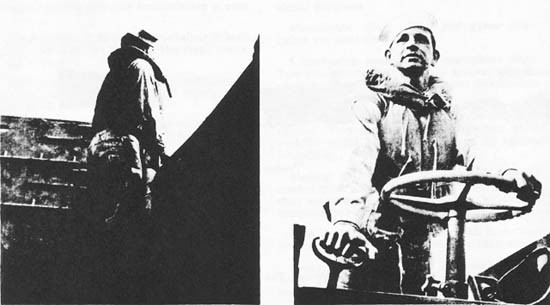 What are the qualifications, or personal qualities, of the top-flight crewman? The engineer, of course, is given special training as a motor machinist before coming to "amphib." The coxswain is selected for his sturdy build, 20/20 vision (or at least, 15/20), education (high school graduates are desired), and reasonably good scores on the Navy General Classification Test (G.C.T.). Previous experience with small boats or civilian experience in driving a heavy truck are important, too. Such personal qualities as leadership, initiative, athletic ability, and mechanical aptitude are helpful.

The signalman must have excellent vision and is most likely to be chosen if his Navy Reading Test score is high. An aptitude for or ability in mechanical and electrical skills are useful to all boat-crew members.

The responsibilities of each boat crew member. On any small boat each man is likely to find it valuable to know something about the work of every other man. Particularly in an actual amphibious operation there is the possibility that one or more of the crew can be put out of action. When this happens, someone else must step in. The deckhands may need to make minor engine repairs, or the engineer rig the jigger to get a fouled ramp into an upright position. The coxswain may find it necessary to pinch-hit in sending semaphore messages, or the signalman may need to take over the wheel and get the boat off the beach.

If you are the coxswain, some of the responsibilities that fall to your lot include the daily boat check, a knowledge of rules of the road, bouyage systems, care of gear, and your part in ship-to-shore movements. Your boat and how she handles should become as well-known to you as the taste of bacon and eggs. Docking, or lowering from a transport, coming alongside, beaching, and retracting will be all in the day's work.

As an engineer, the daily engine check becomes your job, but only one small part of it. You will need to know how to make repairs, and how to spot motor trouble before it has a chance to cause damage. As a signalman, you will find yourself using the blinker light and semaphore flags in the somewhat technical field of amphibious communications. In ship-to-shore movements, the maneuvering signals are to be learned accurately and completely, and you will need to recognize the various signals for control of landing craft at the transport.

Familiarity with marlinspike seamanship, bouyage systems, rules of the road, and ship-to-shore movements, plus a thorough knowledge of what your boat will do are demanded of the deckhand who is "on the ball." 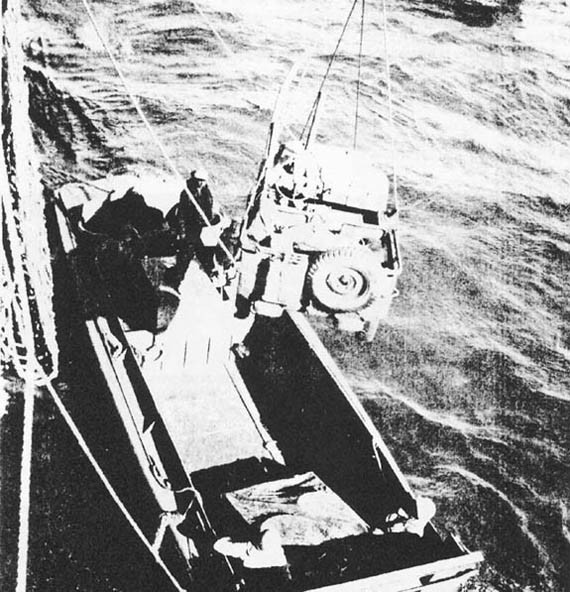 This brief summary should give a clearer idea of the various parts of the landing boat manual which you will wish to study most carefully. Each boat-crew member will need to be familiar with all chapters, but the coxswain will need to have at his fingertips the sections on seamanship skills. ("Learning the Ropes"), operation ("The Coxswain Takes Over"), and landings ("Hit That Beach"). The engineer's special concern is care and maintenance ("Keep it Running"), while the Signalman and the deckhands will go over, with particular attention, the sections on seamanship and salvage.

In one of the earlier Pacific operations an LCVP was going in with the second wave of boats. There was heavy shore fire from small guns and sweat beaded the faces of the boat crew and three dozen Marines in the cargo space. Part way to the beach the coxswain was hit and the engineer took over until a .30 caliber slug injured his shoulder. Without hesitation one of the two remaining men, a signalman-deckhand, carried on and made the landing. It wasn't perfect, but it showed that he knew more than just his assigned job. The Marines got ashore and the two deckhands not only returned to the transport, but made a cargo run after their coxswain and engineer who were left at a first-aid station.

That kind of performance is routine in "amphib." If you Know Your Job you can do it, too.