Chapter I. Landing Boats Are Important! 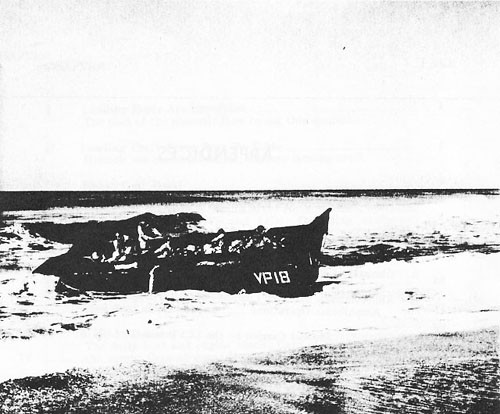 The forces of the United States are on the road to Tokio. When the homeland of the Japanese is finally smashed, no small amount of credit will belong to the hard-hitting amphibious forces which helped to bring victory nearer to reality.

In the Solomons, the New Georgias, the Gilberts, the Aleutians, the Marshalls, and Philippines--on beaches scattered over tens of thousands of square miles of the pacific--"amphib" has led the way. "Amphib" got the men and supplies ashore at Casablanca, in Sicily, in Southern Italy across the Strait of Messina, at the Anzio Beachhead below Rome, and along the treacherous coast of Normandy.

This proud record proves the amphibious forces a part of the fleet second in importance to none. Without landing craft, and the men who man them, the steady pressure and progress from Guadalcanal to Luzon and beyond

could never have been made. Battelwagons can't hit the beach. They merely can help to make the path a little easier for the LCVP, the LCM, the LCI, and the scores of other tough-bottomed craft which go in at H-hour.

At present "amphib" has an important future. Uncounted operations lie ahead in yet unconquered islands in the Philippines, in Formosa, perhaps, and in China, and in the homeland of the Japanese: Honshu, Hokkaido, and other islands with names as difficult to spell as they are to remember.

The men now in training at the various amphibious bases will add to the story of amphibious operations. The story is well-begun, and is being written skillfully in the surf and on the sand of Pacific beaches. In order that the last chapter may be written successfully on the sands and rocks of Japan itself, the men now preparing for active participation in the amphibious forces are being given the best possible training. Lessons learned through hard experience on shell-marked beaches have been made a part of this training. Landing craft crews who drive through the surf on future D-days will benefit greatly from this training if they turn their efforts to mastering the phases of the program set up for them at the various amphibious bases.

This book has been prepared to introduce trainees who are to handle the LCVP (Landing Craft, Vehicle Personnel) and the LCM (Landing Craft, Mechanized) to their boats and to the basic knowledge they must have to land successfully the men and equipment necessary to seize and secure a beachhead. There is much to learn! And as much as possible must be learned in training, before going overseas.

The coxswain who broaches on an enemy held beach because he has not thoroughly mastered his job may not have a second chance to improve his skill. Jap snipers and machine gunners in the vicinity will do their best to make sure that the careless coxswain's first mistake, on their sector of the beach, is his last!

In the following pages the officers and crew members of LCVP's and LCM's will find a variety of information and advice as to how to do their work successfully. The material is practical and useful, and has been contributed by experienced officers and men who know the ins-and-outs of amphibious operations and landing boat handling.

The plan of the manual. Chapter II which follows sketches the historical background of amphibious warfare; especially its rapid growth in recent years. In the third chapter the trainee is introduced to the two boats which he will need to know as well as his own face: the LCVP and the LCM(3). The fourth chapter acquaints him with his general responsibilities and duties as a member of a boat crew, while Chapter V is a more definite presentation of the ways in which the "VP" and "M" are cared for and maintained. The daily boat and engine checks, care of the hull and ramp, minor repairs, and care of gear are some of the topics covered in this important section.

The operation of the LCVP and LCM are discussed in Chapter VI. This is followed by equally important sections dealing with seamanship skills which each crew member will need to acquire. Salvage operations, and material dealing with surf, currents, and tides are the topics of the next two chapters, respectively.

To help the trainee obtain an overview of the ways in which the LCVP and LCM are used in practice landing operations, the tenth chapter described such a maneuver. "Information please," the concluding section of this book lists a number of questions that the alert boat crew member should be able to answer. The man who can answer these items really knows the facts about his job.

How to use this manual. There is no satisfactory substitute for real experience. Even the most intelligent man can not learn how to operate a boat merely by reading about it. Nor can he learn by having someone tell him how to handle it. On the other hand, first-hand experience in the LCVP and LCM will mean more to the man who is acquainted with the subject matter and theory contained, for instance, Chapter III which describes the LCVP and LCM in detail.

There are several ways in which the trainee can make good use of the information which has been placed between these covers. First of all, read the appropriate chapters before attending a lecture class. The lecture will mean more. After a classroom session, if you are unclear on any of the details, go over the printed material.

In the same way, after actually working in the landing boat, study this book to fix in mind the points covered by the instructor. Perhaps more important, review the various sections as you have completed your training. Chapter XI will be very helpful in this respect. The more important points, the "high spots," of operating and handling the LCVP and LCM are reviewed there.

Unfortunately, human beings do not have perfect memories. Especially when a particular skill or piece of information is not used daily, it is likely to be forgotten. Therefore, hang onto this manual. Just because you have read it through, do not jump to the conclusion that you really known all about handling your boat. Maybe you do at the moment, but the chances are that you will become rusty after weeks on a transport. To keep the rust out of your mental machinery, review and re-read the content of the handbook.

Landing boats are important! They are running into plenty of action in World War II. To see this greatest of conflicts ended as successfully and as quickly as possible, every man in the amphibious forces must know his duties backward and forward. This manual will be a real help to the trainee who wants to learn. 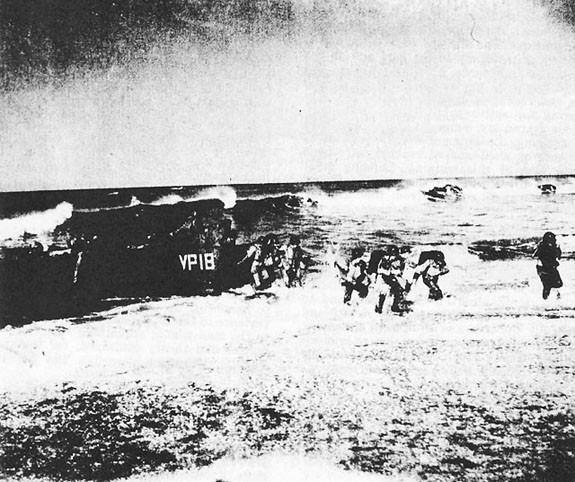