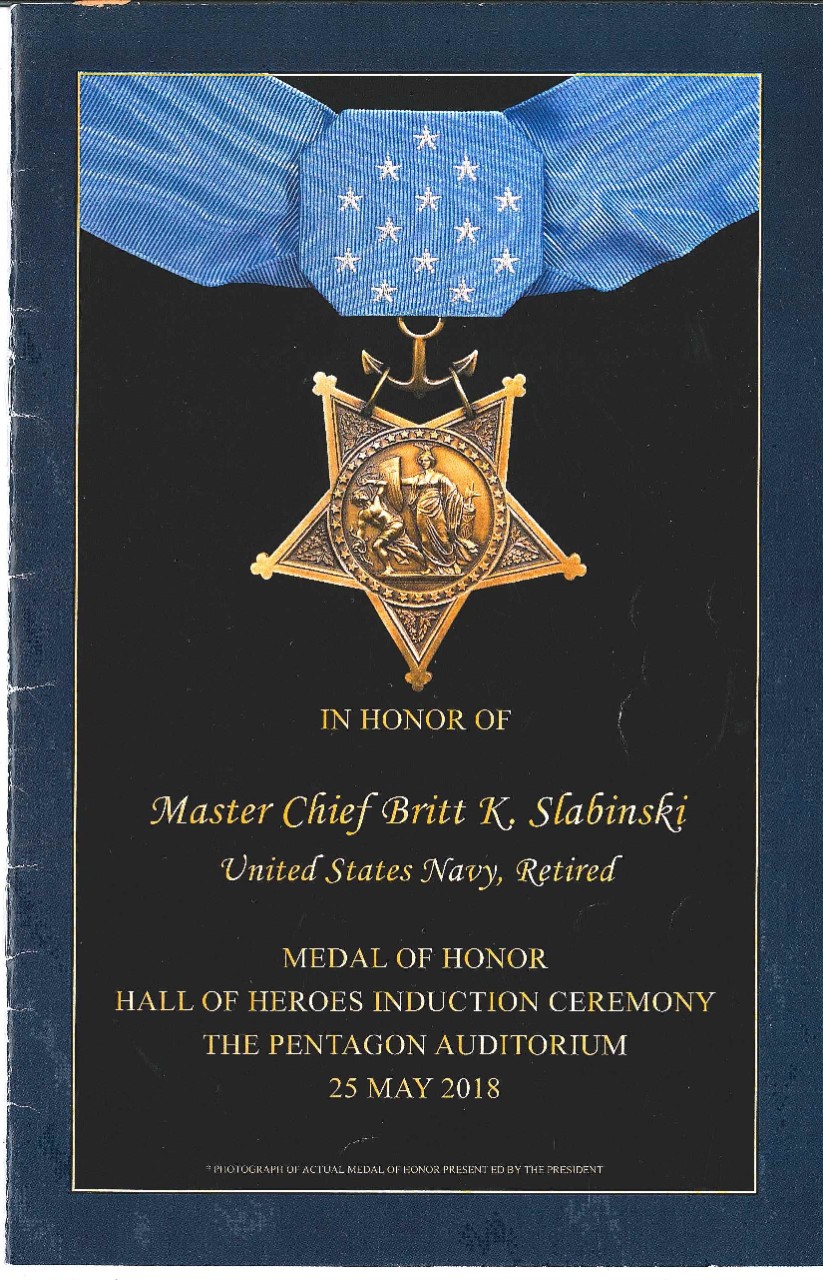 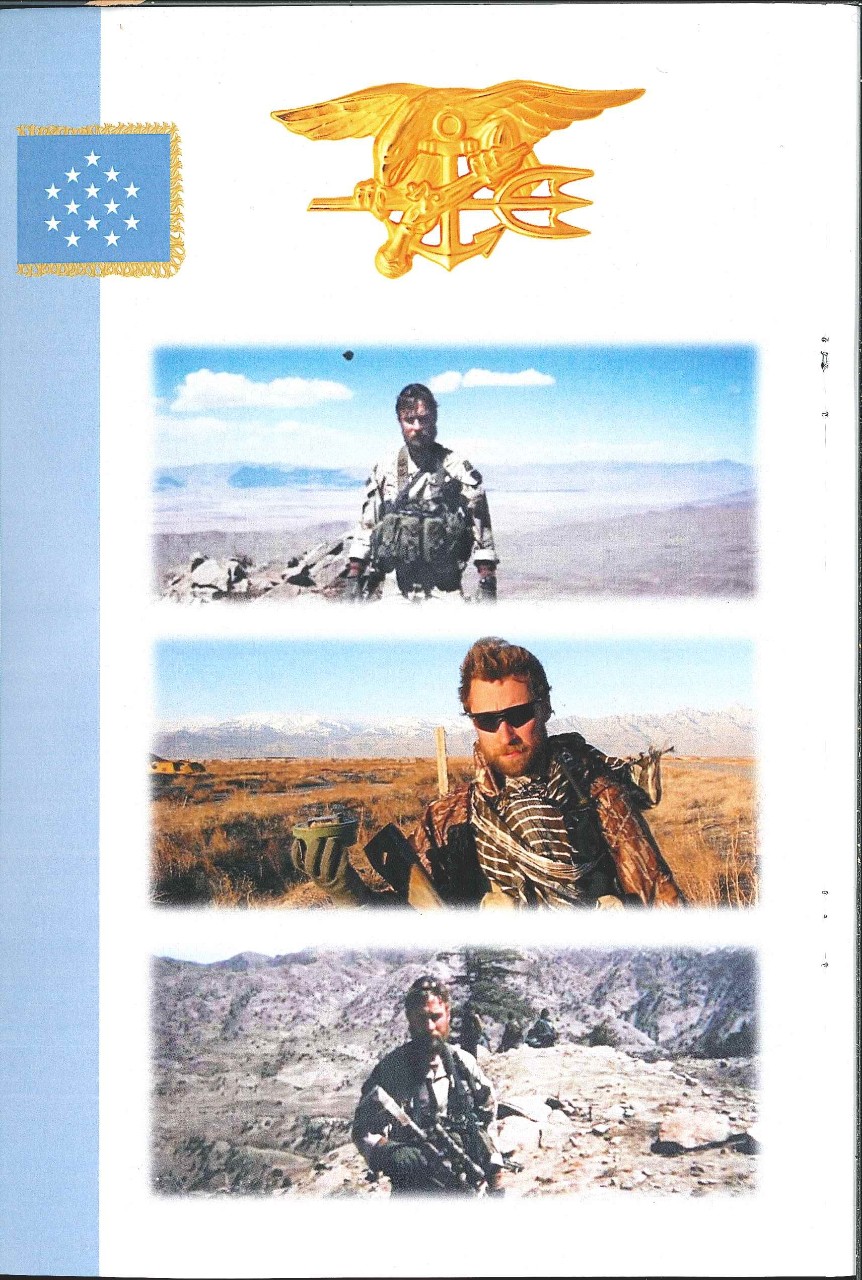 The Honorable Thomas B. Moldy
Under Secretary of the Navy

Presentation of Picture and Citation

Unveiling of Hall of Heroes Plaque 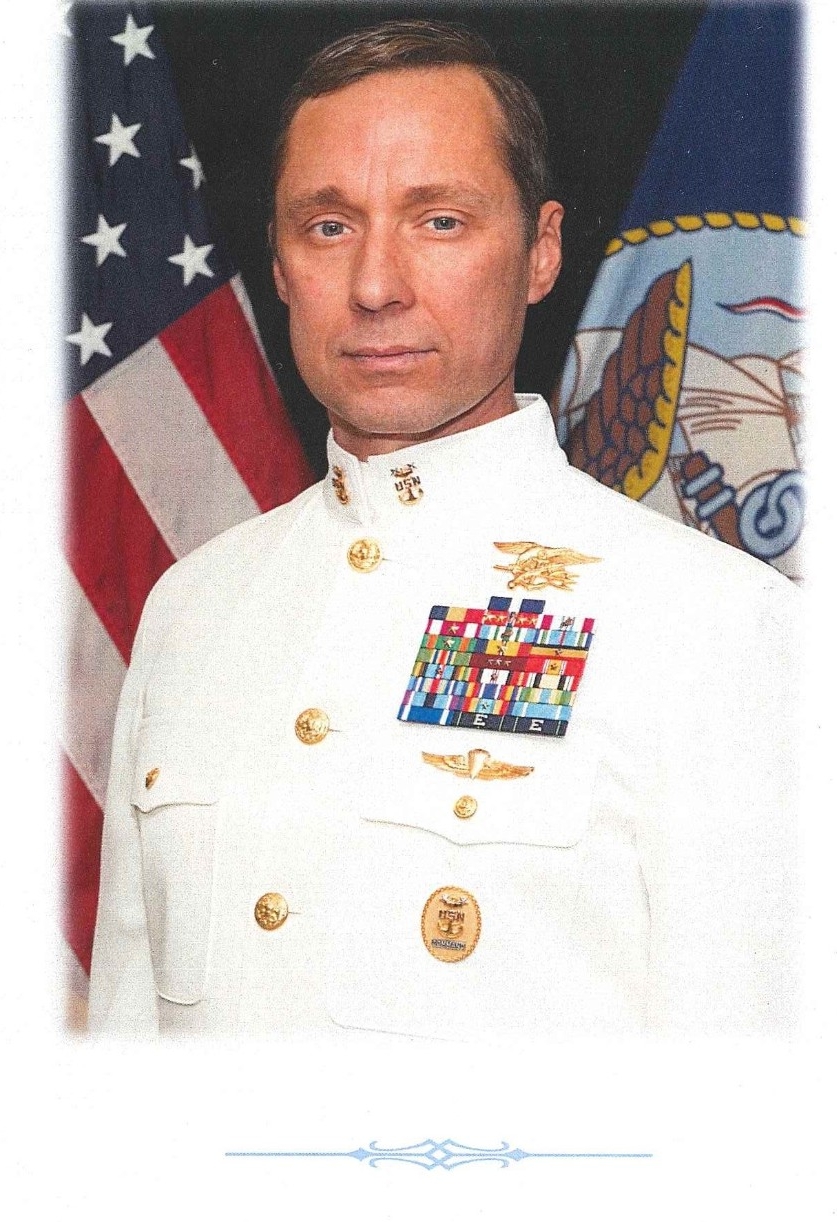 Britt Slabinski is from Northampton, MA. He earned the rank of Eagle Scout at age 14 and upon graduation from high school in 1988 enlisted in the U.S. Navy. Slabinski attended boot camp in Orlando, FL. Upon completion, he received orders to attend Radioman Class “A” School in Sand Diego, CA. There, he trained on the basics of naval communications graduating in spring 1989. Fulfilling a life-long dream to be a U.S. Navy SEAL, he qualified and was accepted into Basic Underwater Demolition/SEAL training (BUD/S) at Naval Amphibious Base, Coronado CA. He graduated in January 1990 with BUD/S Class 164.

Slabinski retired in June 2014 after 25 years of service and is self-employed as a corporate consultant. He has one son who is also an Eagle Scout.

The President of the United States in the name of

The Congress takes pleasure in

Presenting the MEDAL OF HONOR to

For service as set forth in the Following

For conspicuous gallantry and intrepidity at the risk of his life above and beyond the call of duty while assigned to a Joint Task Force in support of Operation ENDURING FREEDOM. In the early morning of 4 March 2002, Senior Chief Special Warfare Operator Slabinski led a reconnaissance team to its assigned area atop a 10,000-foot snow-covered mountain. Their insertion helicopter was suddenly riddled with rocket-propelled grenades and small arms fire from previously undetected enemy positions. The crippled helicopter lurched violently and ejected one teammate onto the mountain before the pilots were forced to crash land in the valley far below. Senior Chief Slabinski boldly rallied his five remaining team members and marshalled supporting assets for an assault to rescue their stranded teammate. During reinsertion the team came under fire from three directions, and one teammate started moving uphill toward an enemy strongpoint. Without regard for his own safety, Senior Chief Slabinski charged directly toward the enemy fire to join his teammate. Together, they fearlessly assaulted and cleared the first bunker they encountered. The enemy then unleashed a hail of machine gun fire from a second hardened position only twenty meters away. Senior Chief Slabinski repeatedly exposed himself to deadly fire to personally engage the second enemy bunker and orient his team’s fire in the furious, close-quarters firefight. Proximity made air support impossible, and after several teammates became casualties, the situation became untenable. Senior Chief Slabinski maneuvered his team to a more defensible position, directed air strikes in very close proximity to his team’s position, and requested reinforcements. As daylight approached, accurate enemy mortar fire forced the team further down the sheer mountainside. Senior Chief Slabinski carried a seriously wounded teammate through deep snow and led a difficult trek across precipitous terrain while calling in fire on the enemy, which was engaging the team from the surrounding ridges. Throughout the next 14 hours, Senior Chief Slabinski stabilized the casualties and continued the fight against the enemy until the hill was secured and his team was extracted. By his undaunted courage, bold initiative, leadership, and devotion to duty, Senior Chief Slabinski reflected great credit upon himself and upheld the highest traditions of the United States Naval Service. 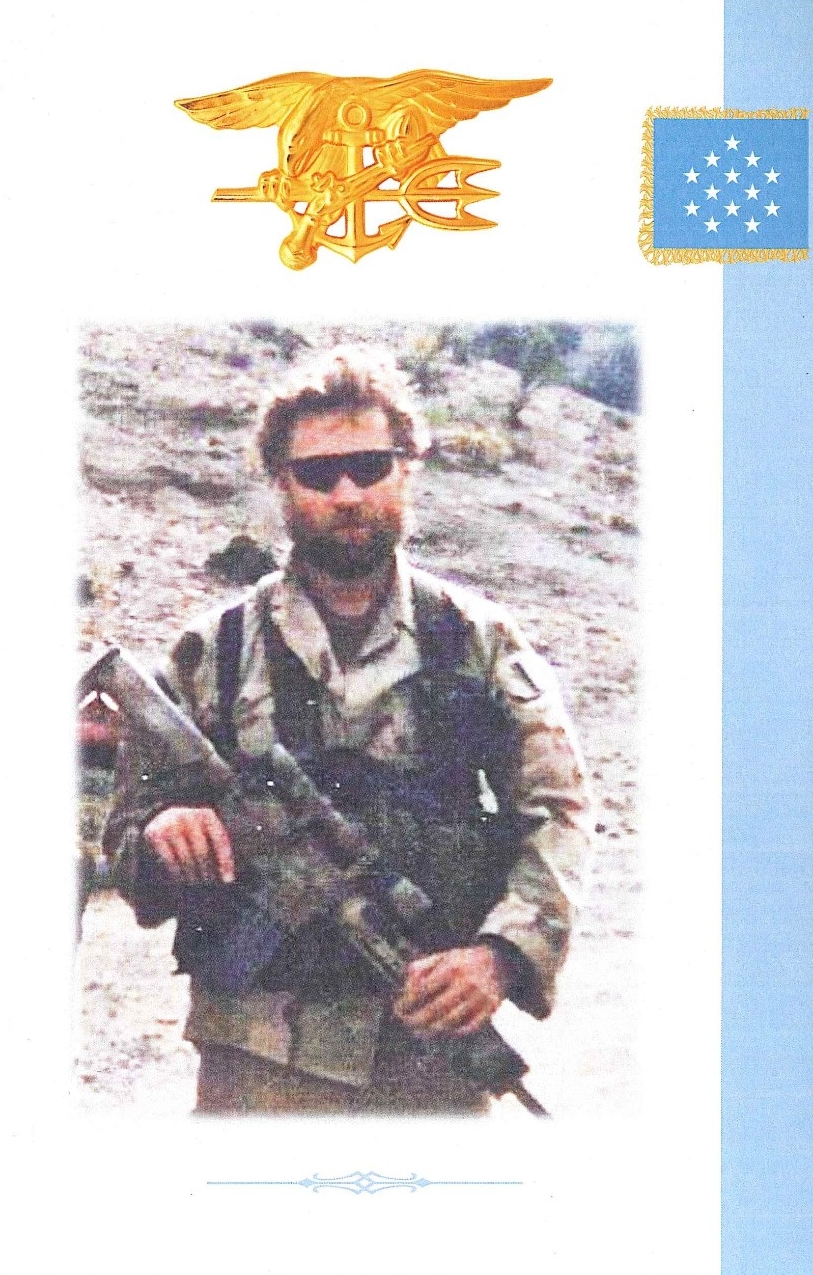 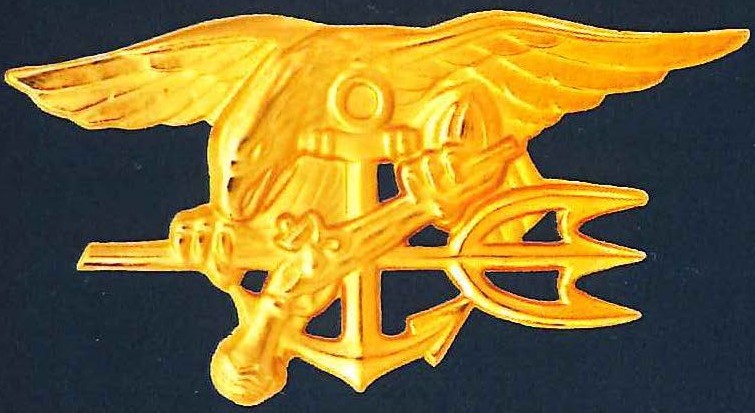 Stand Navy out to sea,

Roll out the TNT,

Sail on to victory

We sail at the break of day-ay-ay-ay.

Through our last night ashore,

Drink to the foam,

Until we meet once more.

Blue of the mighty deep:

Let these our colors be

On seven seas we learn