Look at YOU in the United States NAVY 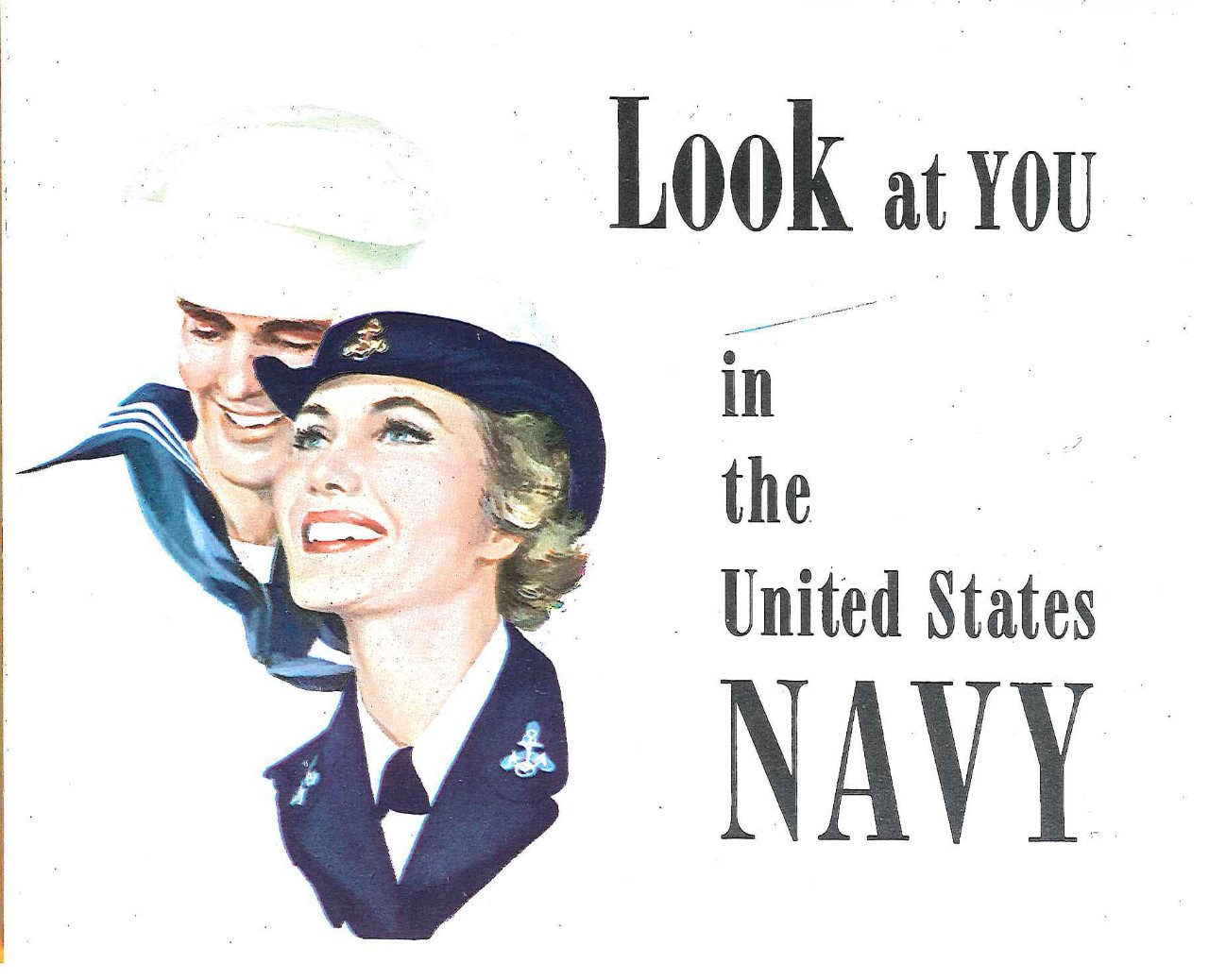 Yes, you’re looking at me. But then…I’m a girl just like you.  Come from a nice town.  Grew up and went to school there and had lots of friends.  Kept pretty busy, too, what with painting scenery for the dramatic club, managing the bowling team, swimming, parties and dances, school work and singing in the church choir.  My folks are pretty nice people—not too rich, not too poor—you know, just like yours.  The gang always made our house headquarters.  What more could I want?

Then along came graduation, and, suddenly, I realized that everybody else was planning on college or getting a job or going into the service (Jim, my brother, joined the Navy) and they all had exciting things to talk about.  Not me.  I was the original dull Annie.  So I decided it was high time to get busy and line up my future.

“I’m healthy”, I figured, “I’m not dumb and I have a high school diploma to prove it.  I have no husband or dependents to worry about.  I’m a good American Citizen, 18 years old…why I’m an adult ready to find my pearl in the world’s oyster.  But where to look for the pearl?  No humdrum job for me.  I want an important job—one that’s interesting and different.”

Then I got to thinking about all the exciting things Jim had been doing since he joined the Navy…traveling, meeting lots of people, learning a job he liked—and getting paid for it.  There it was—the job that was different—the Navy.  But I didn’t want to be an electronics technician like Jim was planning to be.  Where could I fit in?  One way to find out…

I had to walk around the block twice to get up my courage [sic] but I finally managed.  I went to see the Chief at the Navy Recruiting Station.  Imagine my surprise—he didn t [sic] try to “sign me up” on the spot.  Just talked to me about the Navy and all the jobs women can do.  Even some of the things I’d never thought of sounded pretty interesting.

He told me about the classification tests and interviews and how your aptitude and interests and education—even your hobbies—play a part in finding just the right job for you.  (Told me that three out of four women recruits qualified for training at Navy specialist schools, and that, with my high school grades I should be able to go to a school, too).  He showed me the Navy Occupational Handbooks with the descriptions of all the jobs and the training for each.

The Chief gave me the picture on pay—the Navy provides food, quarters, medical and dental care and uniforms and in addition, pays you a salary every month. 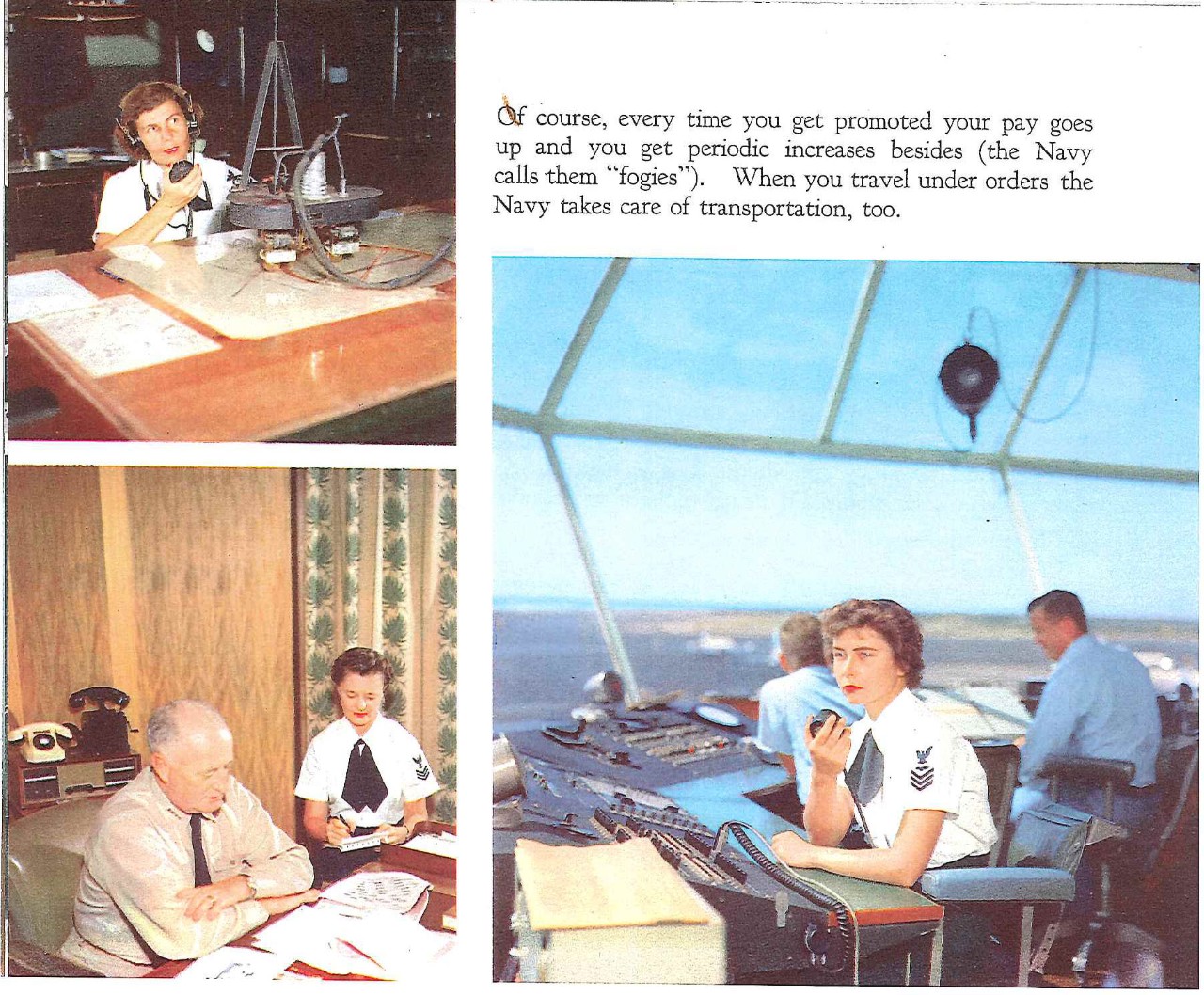 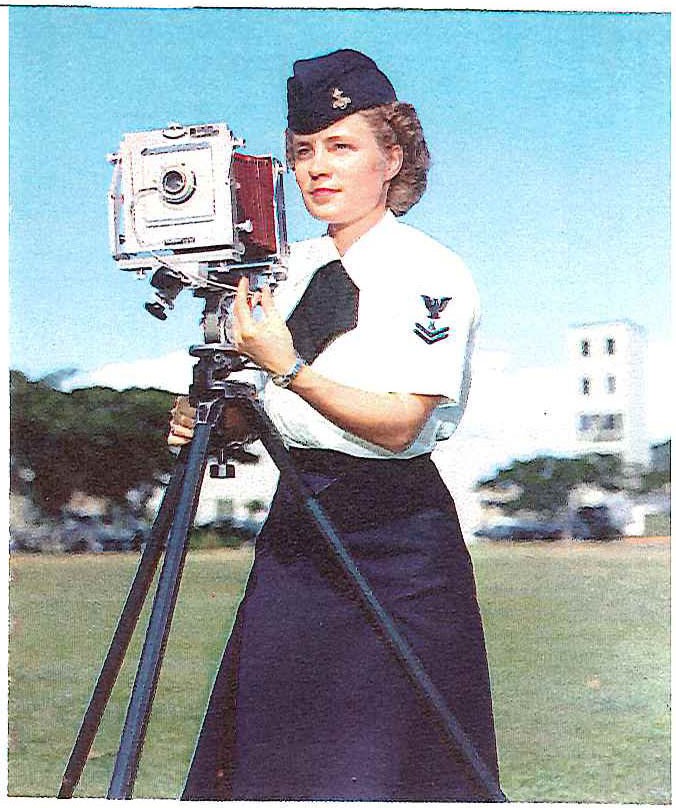 He told me about all the places he’s been—England and France, Puerto Rico and Cuba, the Philippines, Hawaii and Japan.  Said I might have a chance to see some of those places, too, after I’d had a tour of “shore duty” in the United States.  Women can volunteer for overseas duty and those who prove they can be depended upon to do a good job travel to all sorts of interesting places.  Men and women perform the same duties, he said, except women aren’t assigned to combat ships or planes or to “heavy duty.”  (What girl wants to be a Shipfitter anyway?)

Guess I’d never really thought about it before, but a naval base is like a self-sufficient community.  They have beauty parlors, shoe repair shops, laundries and dry cleaners and Navy Exchanges where you can

buy everything from toothpaste to costume jewelry.  There are movies, dances and parties, game rooms, libraries and tennis courts—sometimes even a golf course. And of course, there’s always the “Gedunk”…did you ever have a banana split with five flavors of ice cream?

Then the Chief did a funny thing.  He said—“Don’t enlist in the Navy just for a lark, because you think it’s glamorous.  This Navy of ours has a big job to do—a serious job.  If you come into the Navy you’ll be part of the team and you’ll work hard.  You’ll be responsible for your part of the job, and, if you don’t assume that responsibility, one part of the machine will stop working.  If you know anything about motors you know that if one part stops, sooner or later the whole kaboodle breaks down.  You go home now and talk it over with your Mother and Dad.  Ask Mr. Bauer (our high school principal) what he thinks about it.  And you give it some serious thought, too.  Make up your own mind.  Then, if you’re sure you want to join the Navy, I’m sure you’ll like it—and we’ll make arrangements for your enlistment processing.”

He gave me some booklets and folders to take home and—well, the result is obvious…

All you have to do is look at me and you’ll know that I love it…and the best part is that my folks are happy about it, too.  Dad’s pleased about my being financially independent.  Says it’s good for my self-respect as well as his pocketbook.  Mom says she doesn’t have to worry about my living in some rooming house and eating at soda fountains and she knows I get the best of medical care any time I need it.  Our choir director at church was a chaplain’s assistant during the war and he told Mom and Dad about the wonderful job Navy chaplains do and Mr. Bauer backed up everything the Chief told me about educational opportunities in the Navy.

All of them were right, too.  It’s a nice feeling to know that if I want to buy a new formal for the big dance next weekend I don’t have to wonder if Dad will have to put off buying that fishing tackle he wants so I can have my dress.  Nice to watch my bank account build up, too…with the Navy paying my living expenses, my salary is mine to save or spend.  I like living in quarters, they may not be the Ritz but they’re attractive and comfortable and the company’s wonderful.  The food?  Terrific!

The Chaplains conduct character guidance courses as well as religious services.  They really make you think, too, and the chaplains are so easy to talk to you never hesitate to take your problems to them. 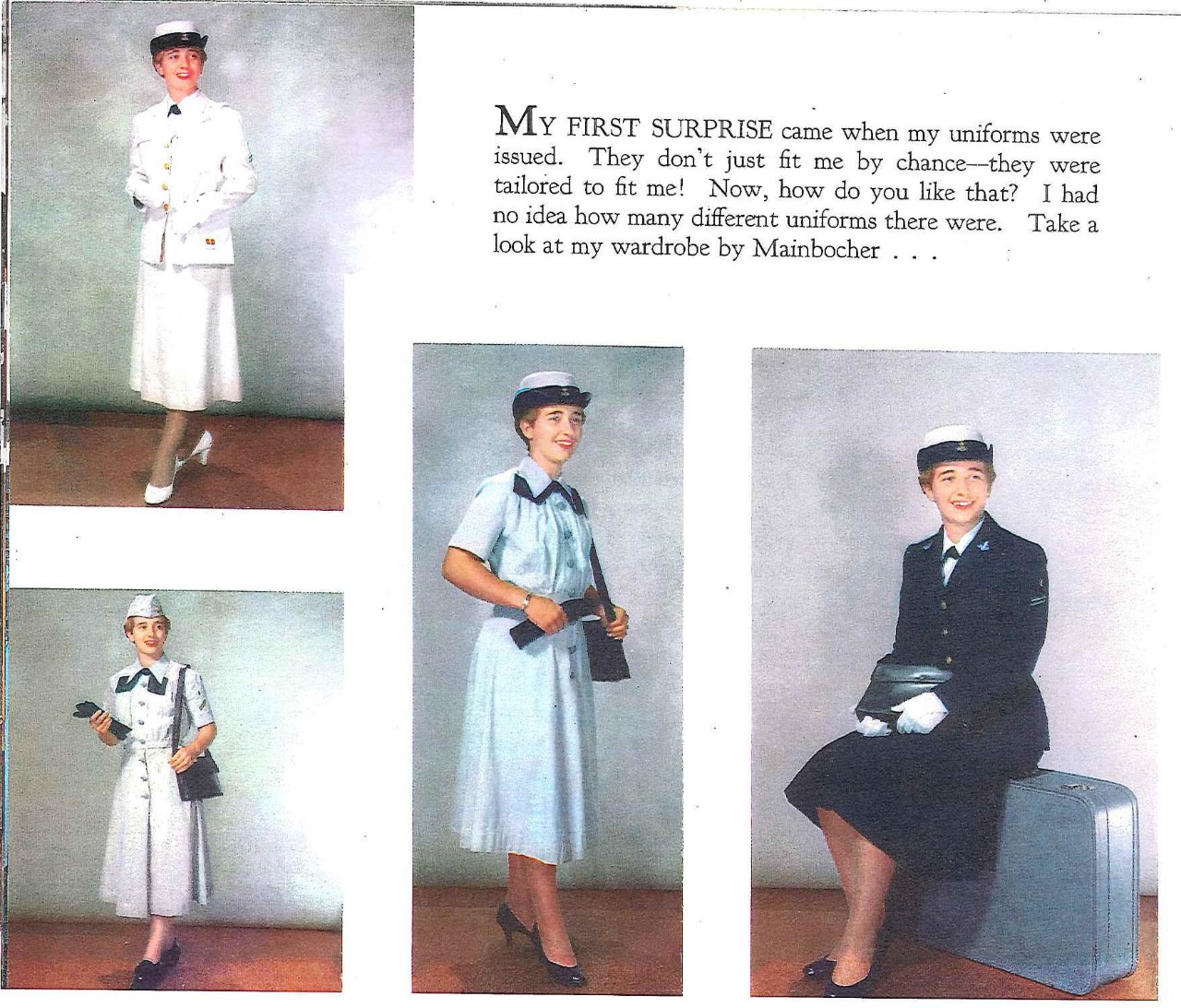 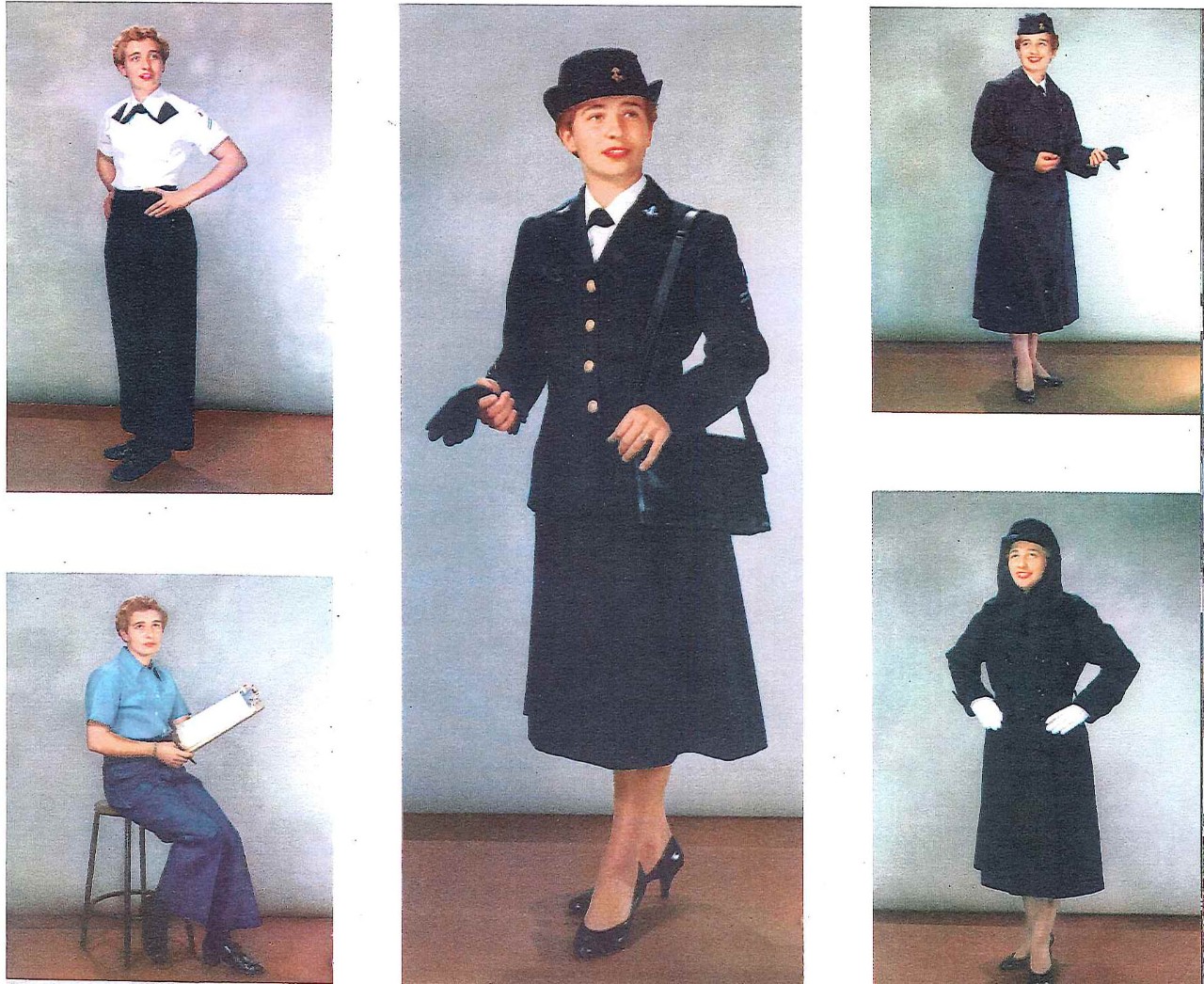 As for education…well!  I’ve been in the Navy about a year and I’ve been to three schools already!

First, Recruit Training at Bainbridge, Maryland.  It really keeps you hopping to learn all the ins and outs of what makes the Navy tick…  By the time that nine weeks is up you have a healthy respect for an organization that carries such a big responsibility in world affairs…and you’re so proud to belong!

After Recruit Training my company split up in all directions.  Some of the girls were assigned to duty immediately…those who had training and experience already, those who wanted to look around some more before they made up their minds about specializing and some who were going into work where on-the-job training is most practical.  Others went to specialist schools…hospital corps, dental technician, yeoman, store-keeper [sic], communications rates and electronics groups.

I went to Airman School in Pensacola, Florida.  I’ve always been interested in planes and flying and I guess I did pretty well on the Navy General Classification Test (measures ability to think clearly and to learn) and the Navy Arithmetic Test (ability to use numbers in practical problems), so I asked for Airman School, although I didn’t know what aviation specialty I wanted.

A week or so after I got to Pensacola I decided I’d never get through the school.  It was all new and strange…and technical.  I kind of got cold feet, I guess.

Then one day I went to see the Chaplain.  Told him I’d made an awful mistake about wanting to go into aviation.  Knew I’d flunk out…and I’d never failed anything before.  He let me talk myself out and then he reminded me that I’d qualified on my classification tests and had a good high school record.  He reminded me, too, that a couple weeks isn’t really a fair trial.  Asked me to go back and try it for a month.  Promised he’d back me up with moral support.

The Chaplain was right.  Things soon began to fall into place.  We had all kinds of training aids—movies, field trips, diagrams and models—as well as lectures and textbooks.  When I finished Airman School (in the top half of a class with lots of mechanically-minded men in it) I went back and thanked him for talking me into staying.  By the way, that’s another thing I especially like about the Navy.  Everybody wants you to make good and they don’t mind helping you on their own time.  The instructors, my WAVE officer, even my room-mates, helped.  You can’t let people like that down.

Well, I asked to stay on at Pensacola because I wanted one more chance to look around and make sure which job was for me.  The Education Officer gave me all the details on aviation specialties.  The Personnel Officer and I did a lot of talking about it and I finally decided I wanted to be an Aerographer’s Mate.  That’s a weatherman…I wonder, does that make me a weather-woman?

I felt I was really on my way when I got orders to Aerographer’s Mate School—14 weeks of meteorology, weather codes, map analysis, weather observations and so forth.

With all that you’d think I’d be an expert, but now that I’m on duty in California (I’m really seeing the good old U. S. A.!), I’m still learning something new every day on the job—and I’m studying training manuals for advancement in my rating.  My work is interesting and important…and different.

Things are never dull around a big naval base and I’m right in the middle of all the activity.  Off duty I keep pretty busy what with painting scenery for the station little theatre group, bowling in the league, swimming, station parties and dances and singing in the Chapel choir.  I’ve made lots of friends and the lounge in our quarters is headquarters for the gang.  Incidentally, speaking of the crows…we took a count of the different ratings in the group the other night. Reads like the Occupational Handbook… 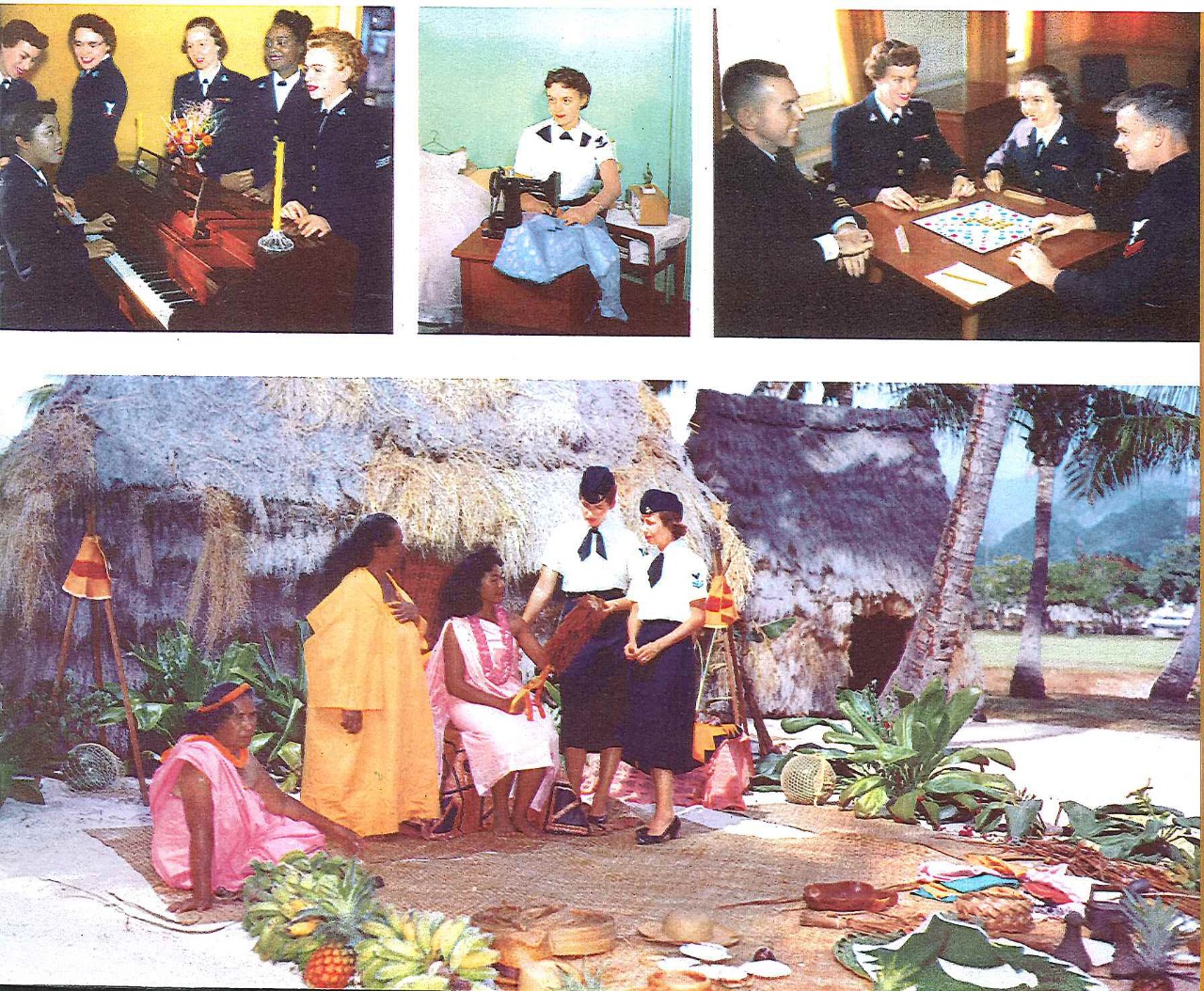 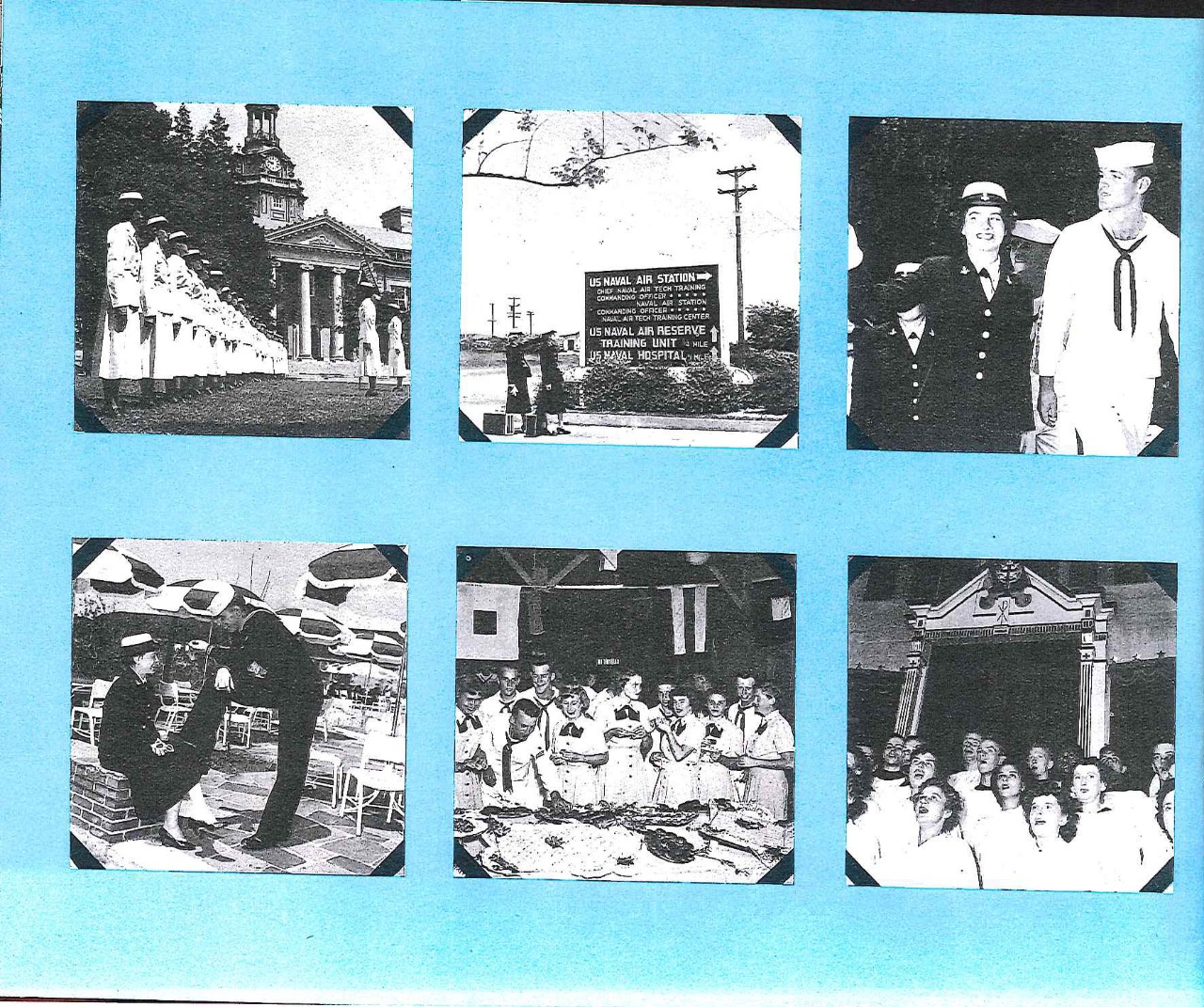 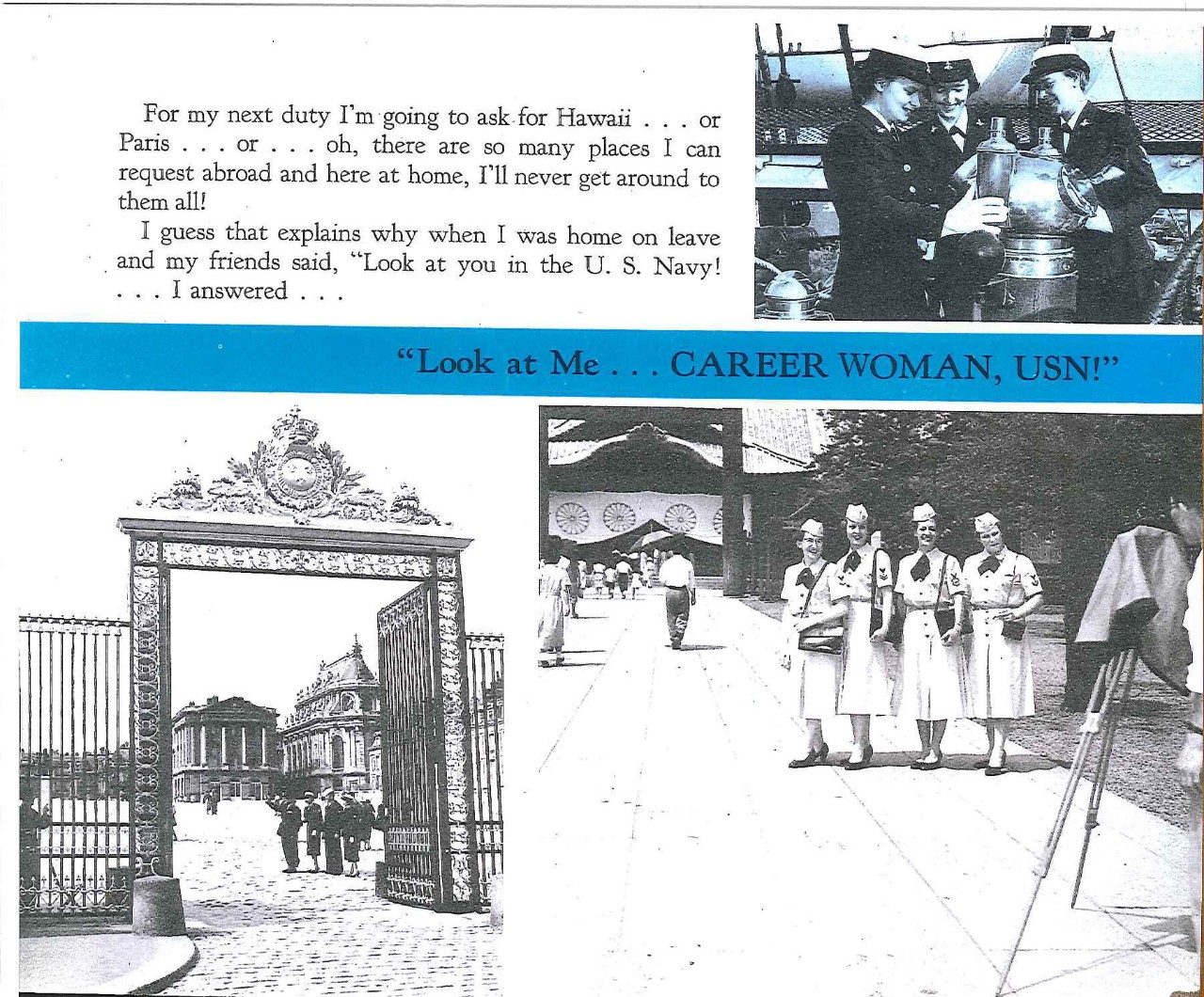 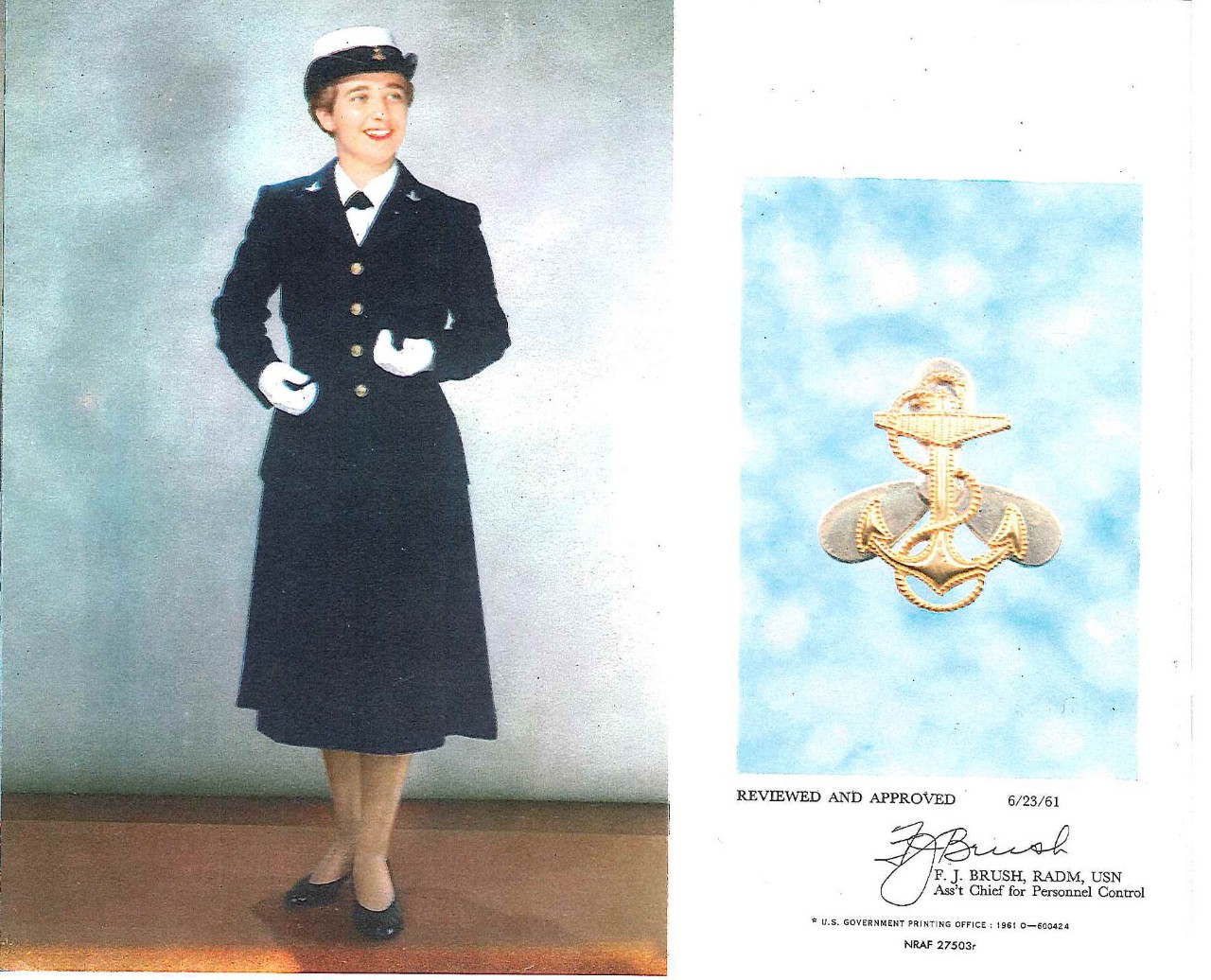