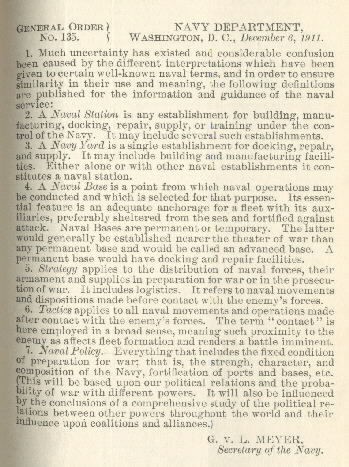 Image of General Order No. 135 (1911) Definitions of Well-known Naval Terms

1. Much uncertainty has existed and considerable confusion been caused by the different interpretations which have been given to certain well-known naval terms, and in order to ensure similarity in their use and meaning, the following definitions are published for the information and guidance of the naval service:


2. A Naval Station is any establishment for building, manufacturing, docking, repair, supply, or training under the control of the Navy. It may include several such establishments.


3. A Navy Yard is a single establishment for docking, repair, and supply. It may include building and manufacturing facilities. Either alone or with other naval establishments it constitutes a naval station.


4. A Naval Base is a point from which naval operations may be conducted and which is selected for that purpose. Its essential feature is an adequate anchorage for a fleet with its auxiliaries, preferably sheltered from the sea and fortified against attack. Naval Bases are permanent or temporary. The latter would generally be established nearer the theater of war than any permanent base and would be called an advanced base. A permanent base would have docking and repair facilities.


5. Strategy applies to the distribution of naval forces, their armament and supplies in preparation for war or in the prosecution of war. It includes logistics. It refers to naval movements and dispositions made before contact with the enemy’s forces.


6. Tactics applies to all naval movements and operations made after contact with the enemy’s forces. The term “contact” is here employed in a broad sense, meaning such proximity to the enemy as affects fleet formation and renders a battle imminent.


7. Naval Policy.–Everything that includes the fixed condition or preparation for war; that is, the strength, character, and composition of the Navy, fortification of ports and bases, etc. (This will be used upon our political relations and the probability of war with different powers. It will also be influenced by the conclusions of a comprehensive study of the political relations between other powers throughout the world and their influence upon coalitions and alliances.)