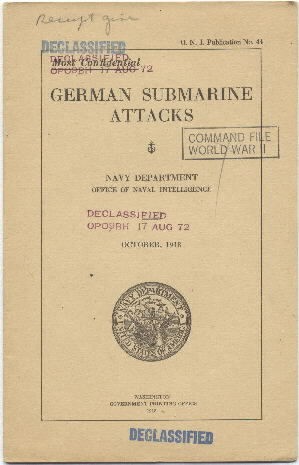 By direction of Office of Naval Operations this study of "German Submarine Attacks," made in the American Patrol Detachment, based on O. N. I. publication No. 37, is issued for the information of the United States Naval Service.

This pamphlet is most confidential and for the use of commissioned officers only.

I. THE GERMAN SUBMARINE ATTACK IN GENERAL.

2. Then the submarine submerges so that it will not be discovered by the lookouts in the tops. If at this time it is still a considerable distance from the course of the target, it submerges to 59 feet, lowers periscope and proceeds at full speed or utmost speed (respectively 7 and about 9 knots) so as to make sure of getting in an attack. It frequently rises and raises its periscope--without special care to prevent being seen--so that its position with reference to the target and the latter's course and speed can be determined.

3. When a range of 4,000 meters is reached, the submarine takes special care to remain unseen. From this time on--unless high speed is necessary to reach the target--slow speed (4 knots) is the normal speed. The submarine runs at such a depth that its periscope when lowered is about 1 meter below the surface. At short intervals speed is decreased to "slowest possible" (2 knots) and the periscope is raised so that a few inches of it project above the surface. It does not remain exposed for more than a few seconds. The attack is made from the direction of the sun and wind so that it is very difficult, if not impossible, to see the periscope, which is painted "a dull

dirty gray color." The German pamphlet states the following important principle for submarine commanders: "You must not for any length of time omit to take a look around."

4. When attacking a single ship, the commander of the submarine reduces speed to slowest possible just before reaching a range of from two to three hundred yards, exposes his periscope for the last time, points the submarine quickly on exactly the proper course for his torpedo and fires. Often the submarine is headed about two points away from the proper course just before exposing the periscope for firing. The rudder is put over 10° and as the boat starts to turn the periscope is exposed; when the head is pointed on the correct course the torpedo is fired. This method makes it possible to fire earlier. Probably about 15 seconds elapse between the exposure of the periscope and the firing of the torpedo. If the target is a particularly valuable one, a salvo of two, three, or even four torpedoes is fired. When attacking a convoy 500-800 yards is the usual range.

5. After the torpedo or torpedoes are fired there are two courses open to the submarine, according to the German instructions. The first is to submerge immediately to 148 feet, presumably at full or utmost speed, and continue at that depth for 15 minutes. It is customary to turn onto a course opposite to that of the target ship. The second course--highly recommended by the instructions--is to remain with periscope near the surface, exposing it at frequent intervals, to watch the results of the shot and the counter moves of the enemy and then submerge to 148 feet for 15 minutes. At the expiration of this time the submarine usually takes a careful look around and if necessary fires a second shot.

The kind of attack to be made depends upon the form of torpedo fire the submarine commander desires to use, whether he intends to use bow or stern tubes and direct or angled shots. The following are the four forms of torpedo shots used by the Germans:

1. Direct bow shot.
2. Direct stern shot.
3. Angled bow shot on parallel courses.
4. Angled stern shot on opposite courses.
The various attacks used for each one of these shots will now be discussed.

The submarine runs on a course at right angles to the bearing of the target at high speed, so as to make sure of getting in an attack. When it has closed in so much that a good position is gained from which the usual slow speed attack can be made, course is changed toward the target by the angle the submarine is on the target's bow, thus making the course of the submarine at right angles to the course of the target, and the speed is reduced. The usual attack is then carried out. The ideal firing position is about 2 points forward of the target's beam and distant about 250 yards, so that the torpedo will run on a course about at right angles to that of the target. It is considered desirable to have the torpedo come up to the ship from slightly abaft the beam, rather than on a course slightly forward of it, or as the Germans say, to have an " acute track angle " rather than an "obtuse " one. Thus their instructions say repeatedly: " Better 75° than 95°." . 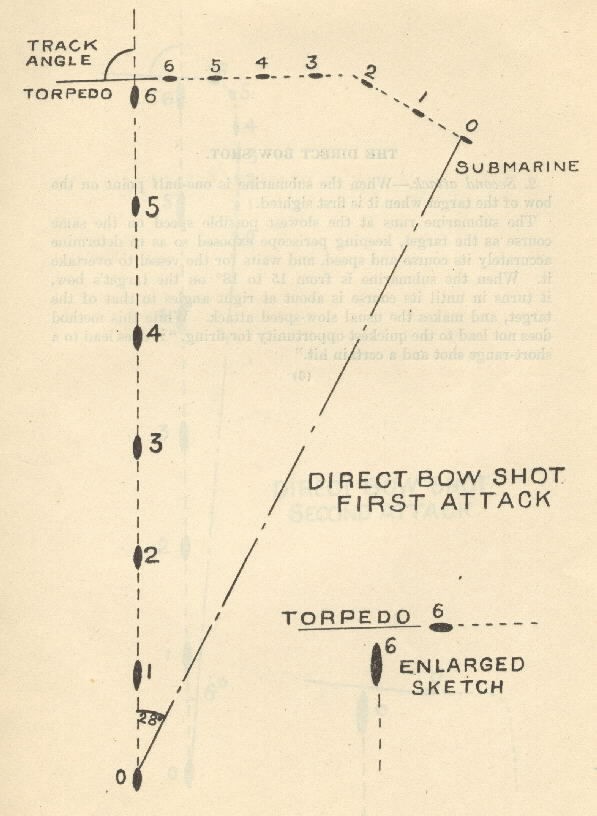 2. Second attack.--When the submarine is one-half point on the bow of the target when it is first sighted.

The submarine runs at the slowest possible speed on the same course as the target, keeping periscope exposed so as to determine accurately its course and speed, and waits for the vessel to overtake it. When the submarine is from 15 to 18° on the target's bow, it turns in until its course is about at right angles to that of the target, and makes the usual slow-speed attack. While this method does not lead to the quickest opportunity for firing, " it does lead to a short-range shot and a certain hit." 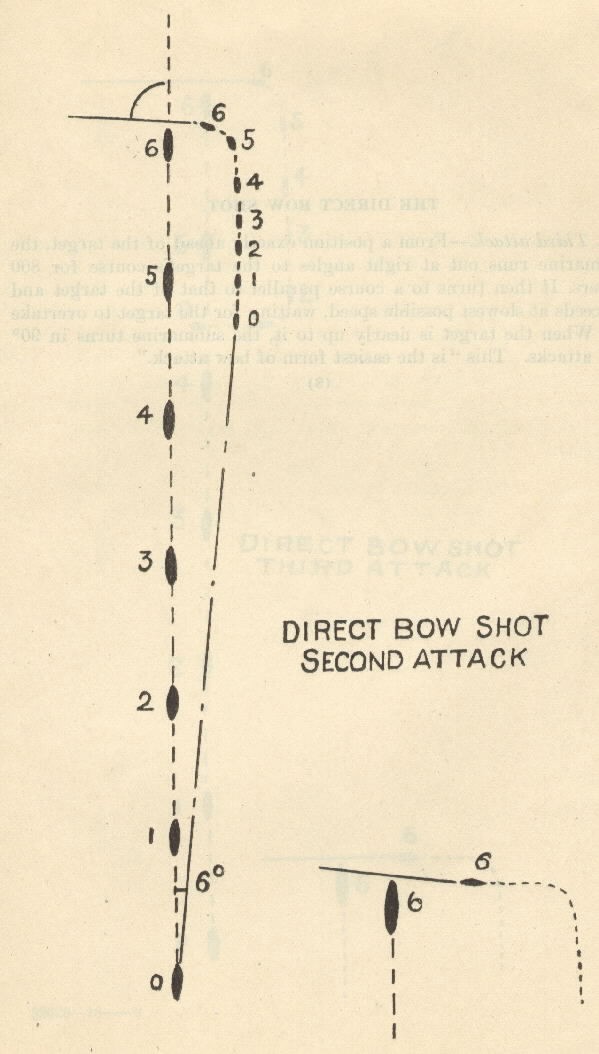 3. Third attack.--From a position exactly ahead of the target, the submarine runs out at right angles to the target's course for 800 meters. It then turns to a course parallel to that of the target and proceeds at slowest possible speed, waiting for the target to overtake it. When the target is nearly up to it, the submarine turns in 90° and attacks. This "is the easiest form of bow attack." 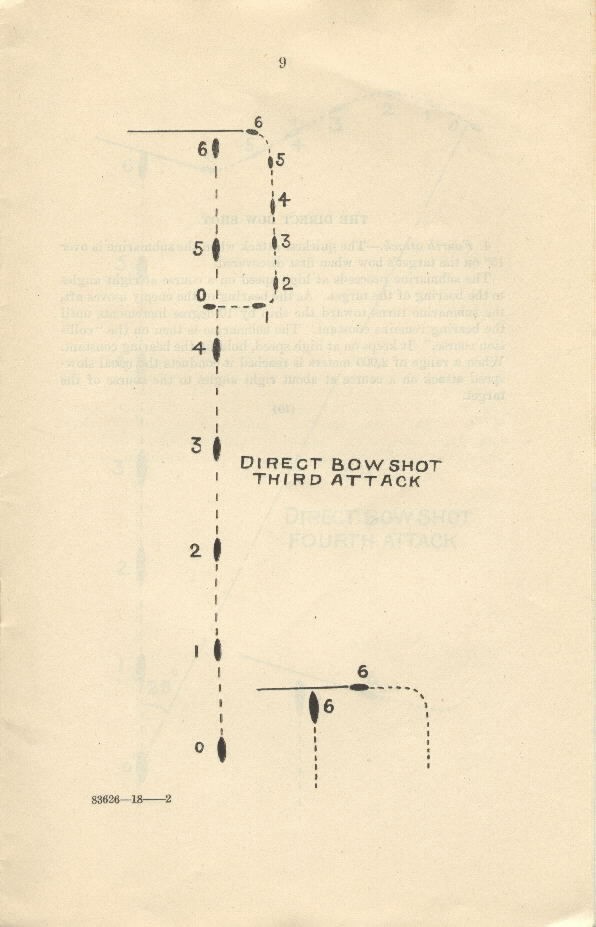 4. Fourth attack.--The quickest attack when the submarine is over 15° on the target's bow when first discovered. 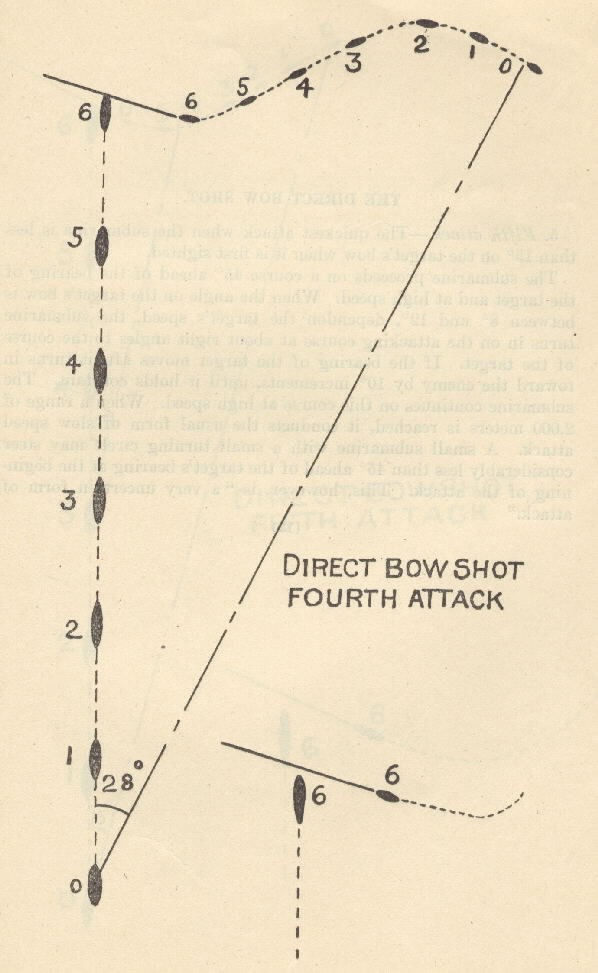 5. Fifth attack.--The quickest attack when the submarine is less than 15° on the target's bow when it is first sighted. 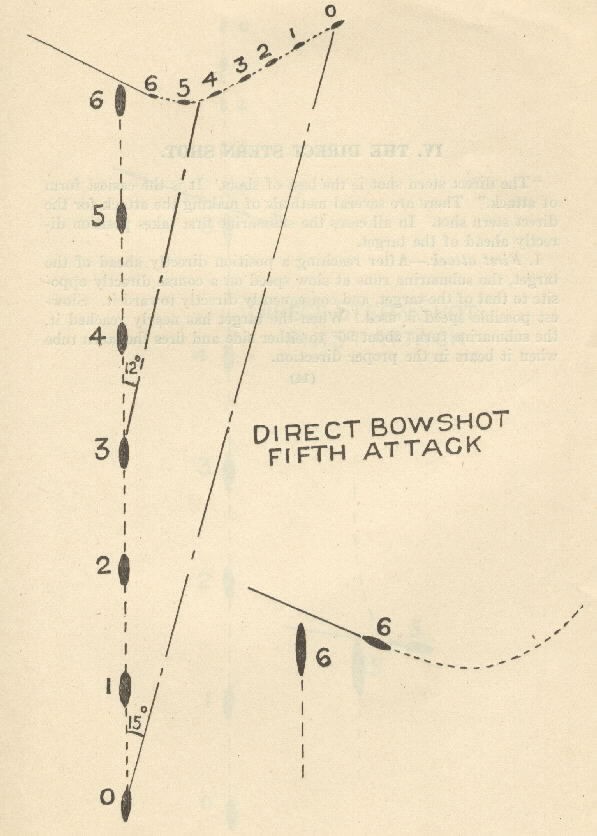 "The direct stern shot is the best of shots. It is the easiest form of attack." There are several methods of making the attack for the direct stern shot. In all cases the submarine first takes position directly ahead of the target.

1. First attack.--After reaching a position directly ahead of the target, the submarine runs at slow speed on a course directly opposite to that of the target, and consequently directly toward it. Slowest possible speed is used. When the target has nearly reached it, the submarine turns about 90° to either side and fires the stern tube when it bears in the proper direction. 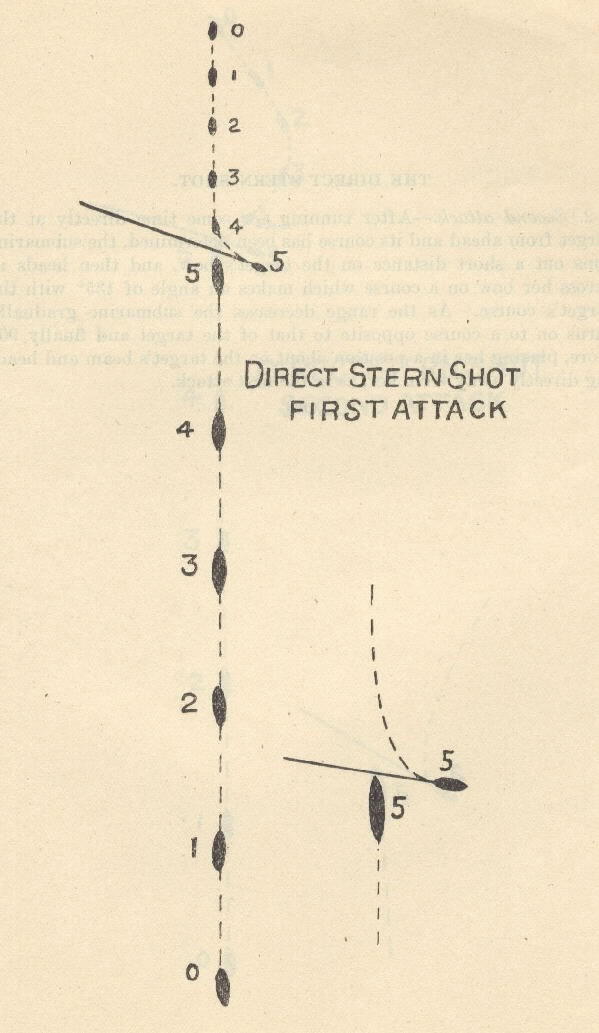 2. Second attack.--After running for some time directly at the target from ahead and its course has been determined, the submarine runs out a short distance on the target's bow, and then heads in across her bow on a course which makes an angle of 135° with the target's course. As the range decreases the submarine gradually turns on to a course opposite to that of the target and finally 90° more, placing her in a position about on the target's beam and heading directly away from her, as in the first attack. 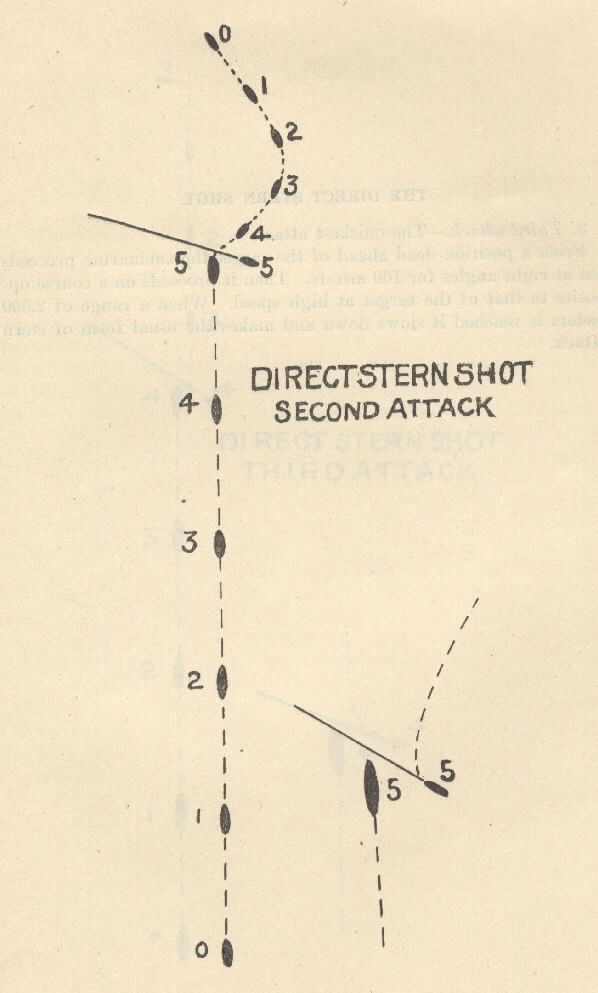 From a position dead ahead of the target the submarine proceeds out at right angles for 100 meters. Then it proceeds on a course opposite to that of the target at high speed. When a range of 2,000 meters is reached it slows down and makes the usual form of stern attack. 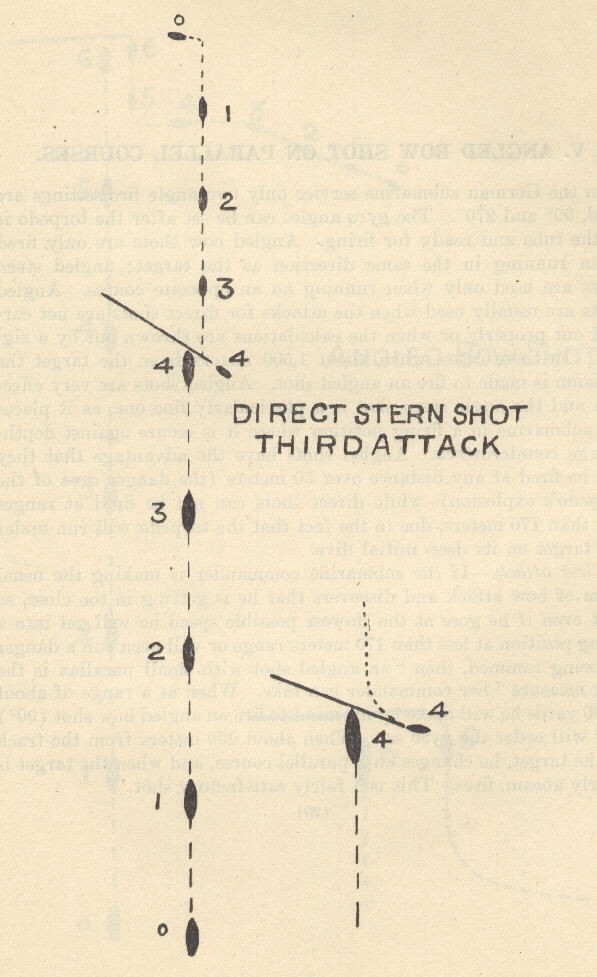 In the German submarine service only two angle fire settings are used, 90° and 270°. The gyro angles can be set after the torpedo is in the tube and ready for firing. Angled bow shots are only fired when running in the same direction as the target; angled stern shots are used only when running on an opposite course. Angled shots are usually used when the attacks for direct shots are not carried out properly or when the calculations are thrown out by a zig-zag. In these cases, when about 1,500 meters from the target the decision is made to fire an angled shot. Angled shots are very effective and the angle stern shot is a particularly fine one, as it places the submarine in a firing position where it is secure against depth-charge counterattack. Angled shots have the advantage that they can be fired at any distance over 50 meters (the danger area of the torpedo's explosion), while direct shots can not be fired at ranges less than 170 meters, due to the fact that the torpedo will run under the target on its deep initial dive.

First attack.-If the submarine commander is making the usual form of bow attack and discovers that he is getting in too close, so that even if he goes at the slowest possible speed he will get into a firing position at less than 170 meters range or will even run a danger of being rammed, then "an angled shot with small parallax is the best measure" her commander can take. When at a range of about 1,500 yards he will make up his mind to fire an angled bow shot (90°) and will order the gyro set. When about 200 meters from the track of the target, he changes on a parallel course, and when the target is nearly abeam, fires. This is a fairly satisfactory shot. 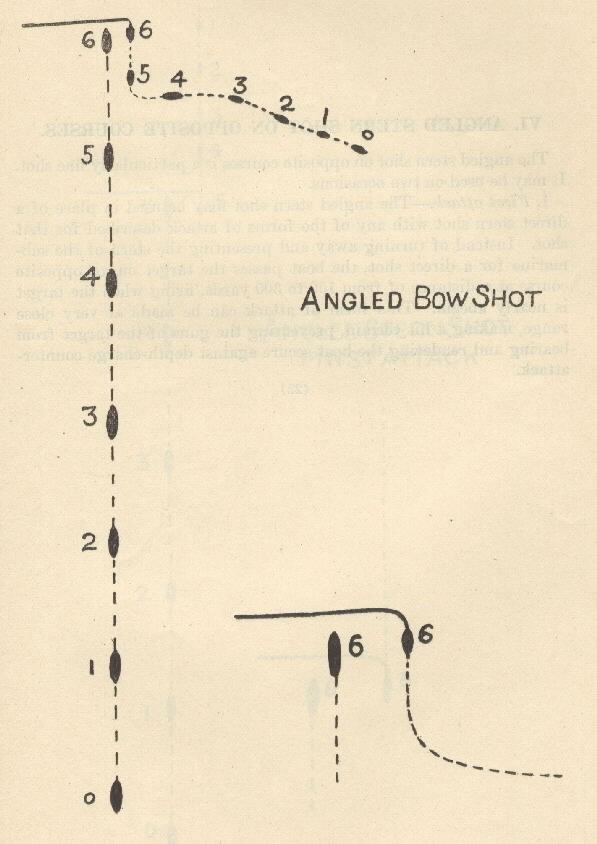 The angled stern shot on opposite courses is a particularly fine shot. It may be used on two occasions.

1. First attack.--The angled stern shot may be used in place of a direct stern shot with any of the forms of attack described for that shot. Instead of turning away and presenting the stern of the submarine for a direct shot, the boat passes the target on an opposite course at a distance of from 100 to 300 yards, firing when the target is nearly abeam. This form of attack can be made at very close range, making a hit certain, preventing the guns of the target from bearing and rendering the boat secure against depth-charge counter-attack. 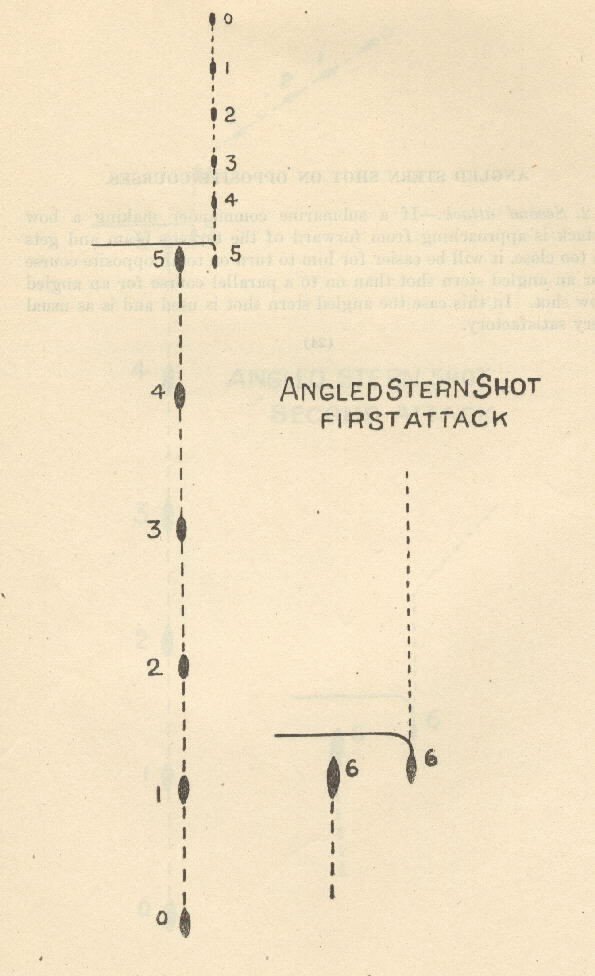 ANGLED STERN SHOT ON OPPOSITE COURSES.

2. Second attack.--If a submarine commander making a bow attack is approaching from forward of the target's beam and gets in too close, it will be easier for him to turn on to an opposite course for an angled stern shot than on to a parallel course for an angled bow shot. In this case the angled stern shot is used and is as usual very satisfactory. 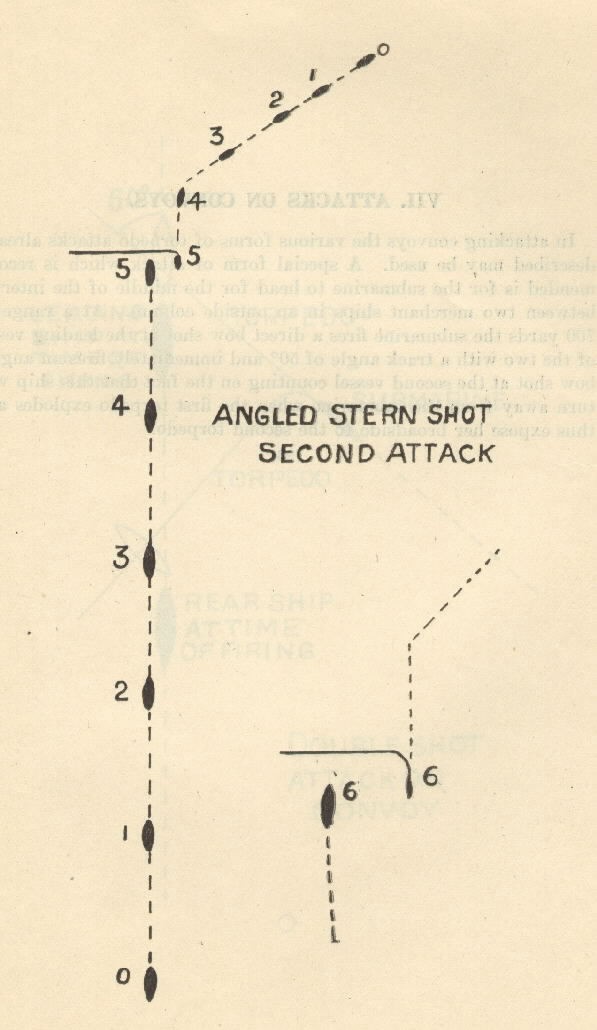 In attacking convoys the various forms of torpedo attacks already described may be used. A special form of attack which is recommended is for the submarine to head for the middle of the interval between two merchant ships in an outside column. At a range of 700 yards the submarine fires a direct bow shot at the leading vessel of the two with a track angle of 50° and immediately fires an angled bow shot at the second vessel counting on the fact that this ship will turn away from the submarine when the first torpedo explodes and thus expose her broadside to the second torpedo. 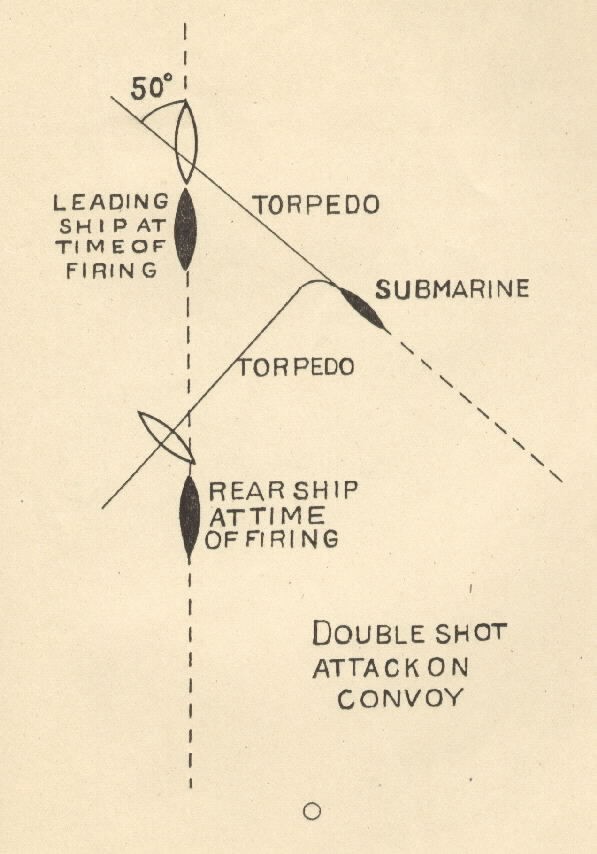 Diagram of Double Shot Attack on Convoy - [shows position of rear and leading ships at time of firing, submarine, torpedo and track angle]