Target designation is a function of command. CIC, as an adjunct of command, usually provides information to gun control as a matter of routine-early warning. OTC’s [Officer-in-Tactical-Command] raid designations, altitude estimates and forewarning of enemy attackers who have evaded intercepting fighters. But CIC teamwork sometimes dead-ends there! In some ships, air operations, fighter direction, navigation, amphibious support and similar specialized operations frequently tend to overshadow much information which gunnery would like to get from CIC, that sometimes fails to reach gun control stations.

This article is a digest of reports and statements, particularly from gunnery and CIC officers, discussing ways in which CIC can facilitate target designation by passing information it has to command and gunnery. The thoughts expressed herein may or may not be useable by every type ship. Some methods and equipment that can be incorporated in CIC procedures which can help with gunnery’s target problems are outlined here for thought and evaluation.

An example of what CIC can do is expressed in a recent action report from a ship: “Two pre-dawn AA [Anti-aircraft] actions fully demonstrated the value of a well trained and organized CIC team backed up by the accuracy of the SA-2 [Air search series 2] radar. In both actions the enemy was almost upon us before we could visually see him, but in both cases all guns were on the correct bearing and waiting for him. Based upon continuous flow of information from CIC, it was possible to maneuver the ship so that maximum fire power was brought to bear on the attacking planes, and a minimum target afforded the enemy.”

Every CIC should make available useful target information to command and gunnery as fast and accurately as possible. The narrow beam of the Mk. 28 [Secondary battery fire-control radar] and other anti-aircraft fire control radars makes it imperative that air targets be designated to the director within 3 to 4 degrees accuracy. CIC has much helpful information, which gunnery can use to get its narrow fire control beam onto approaching targets within the acknowledged 15-second designation time limit if that information reaches gun directors in time for use. Definite CIC procedures have been developed which can make available information for gunnery that will help eliminate the dead-time (time from which bearing is measured to time director is trained on that bearing) which has been responsible for errors of 5 degrees to 15 degrees on fast moving targets. These same techniques enhance routine CIC functions and are standard practice in many CIC’s.

1. Proper Radar Target indication to the fire control radars to insure their getting on the designated target is a function of CIC and is usually handled by a gunnery liaison officer in CIC who uses data available in that space. CIC personnel must present their target information to the gunnery liaison officer in a way that he can easily and correctly understand it while he concentrates on his sound-power and target designation equipment responsibilities.

2. For normal cruising, air search gear operating with continuous sweep and PPI [Plan Position Indicator] on long range, A-scope [position angle scope] on 75-mile range, will permit operators to report good tracks on seven to ten targets with range-bearing accuracy; will guarantee immediate pick-up of new targets as they enter the radar horizon; and will permit the VF (precision PPI) operator to switch to any target considered most dangerous as it comes within the range limits of the VF equipment.

3. Search operators tracking with the A-scope can distinguish aircraft echoes from land echoes much easier than on the PPI. Too many times aircraft approaching from land areas are not seen, or do not appear on the PPI. Fire control radars are also handicapped in picking up “land-blocked” targets, although they can do a good job if their capabilities are fully utilized (see p. 6 this issue). Exact target designation of these targets by CIC from A-scopes of air search radars will give directors a better chance to pick up the planes in spite of the land backdrop.

4. The SG [Surface Search Radar] operator, working closely with the Summary Plotter, can draw attention to maneuvers of other ships that may bring them into line of fire. Close cooperation between SG and VF [Precision Plan Indicator] operators will permit tracking of multiple low flying targets that have approached too close for continued tracking by air search radars-the VF equipment following targets at approximately the same range, while the SG tracks of widely separated targets can be plotted on a 12" RPPI [Remote Plan Position Indicator].

5. Task group maneuvering orders heard in CIC can be passed to gun control, affording them knowledge of any anticipated change in firing sectors relative to closing raids. With each course change the positions of various ships in the task group, as well as adjacent task groups and pickets can be relayed to gunnery from CIC Summary Plot to insure the ship firing on safety bearing.

6. Lookout reports that feed into CIC give gunnery liaison officers immediate knowledge of visual identifications, attacking plane maneuvers, possible decoy approaches and friendly aircraft that may be approaching the line of fire.

7. Intercept officers should not dominate search radars for sector sweeps when they are not controlling interceptions. Sector sweeps neglect the variety of information that other stations need from a continuous sweep.

8. SM [Air and surface search radar, giving altitude of aircraft directly] and SP [Summary plotter] altitude evaluations should reach the directors in order that director elevation search can be limited to small arcs.

The wealth of information assembled in CIC by above procedures-raid development, tracking evaluation of targets, ships maneuvering into line of fire, change of firing sectors relative to target bearing, altitude determination, recognition- are all very important considerations preliminary to target designation which can be passed on to command, gunnery officers and gun directors, by CIC. Instances where CIC personnel have become “gunnery conscious,” to the extent that this information is continuously gathered and fed to gunnery, have demonstrated that by this coordinated effort a greater concentration of firepower can be directed more quickly onto designated priority targets. This pays dividends as enemy planes or ships press home their attacks.

Experience with the PD has led many to say that too many buttons plus too many cranks equal too much time. Some people suggest a happy medium between an “all sound-power” and an “all automatic” system, at least until sufficient time-motion practice makes the PD a faster procedure. All agree that the system which passes data to all stations involved with greatest speed and accuracy is the system to use. Machines can’t talk. In tight spots there can be no substitute for the exchange of thought form one human brain to another-with the emphasis which inflection and direction of the human voice can give those thoughts. However, the tremendous sound-power traffic in time of action makes it desirable to cut down transmissions where possible by making routine designations automatically and supplementing them with voice instruction.

Reports via sound-power channels have been used to permit director trainers to concentrate entirely on their scopes, without necessity to take eyes off it to “follow the pointer” of an automatic designation system. One ship has crossed the 41 and 42 JS phone circuits, manned them by experienced SK operators in CIC, and relays range and hearing reports of designated targets to the range-keepers and trainer each time the air search radar sweeps the target. These talkers gave a 2 degrees to 3 degrees head on each bearing report to allow for time lag. This system was also helpful by informing the trainer of the relative direction the target was moving, particularly when the ship is maneuvering radically. Ships using this method are usually those not having VF installed. Those ships having VF are tending to handle most target designation of radar targets by means of the gunnery liaison officer at the VF in CIC.

The important CIC function is to insure that the information pertinent to target designation that CIC normally has or can easily obtain by adopting tried operating techniques gets to proper stations for use. 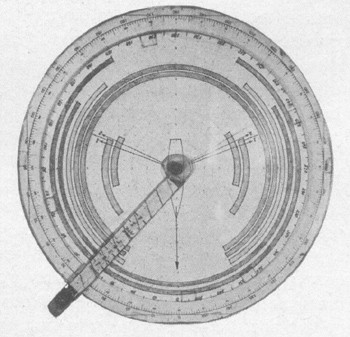 This Gun Train Indicator is made with two bearing circles. The inner circle revolves and indicates the arc of train of all guns. With the ship's head on true bearing and the movable arm on target bearing, the number of guns which can bear is shown by the arm

Some special devices and equipments which have been used to obtain CIC information have been of help. A device recently suggested by DesPac [Destroyers Pacific Fleet] is of help to the gunnery liaison officer in CIC. This disk shows sector coverage of all ship’s guns. When it is rotated to true bearing of the ship’s heading, the gunnery officer can quickly determine in what gun sectors the attack is approaching.

This Gun Train Indicator is made with two bearing circles. The inner circle revolves and indicates the arc of train of all guns. With the ship’s head on true bearing and the movable arm on target bearing, the number of guns which can bear is shown by the arm.

With advance information of all maneuvering orders passed on from CIC, command and gunnery will know which targets must be changed from one gun station to another prior to course changes. This saves precious seconds, particularly during emergency turns.

Another device designed to calculate firing sectors, more complicated in design than the above described gadget, was developed and quite successfully operated by CIC officers on the cruiser Boston. A detailed explanation of the USS Boston Target Designator will be presented in the Ideas of the Month section of an early issue of “C.I.C.”

The Mark 10 Target Designating System, used with varying degrees of success by ships of the Fleet, has been previously discussed to the extent that further presentation is unnecessary. This equipment will be outmoded by new gear designed specifically to handle the surface and air problems individually.