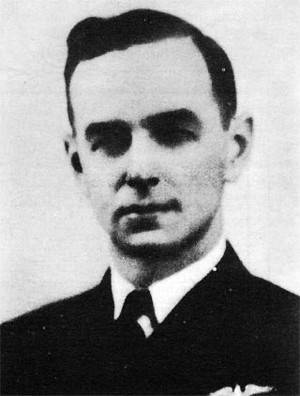 On 1 September 1944, Darter, commanded by Commander D.H. McClintock, left Brisbane for a period of training enroute to her fourth war patrol. She topped off with fuel at Darwin on 10 September and left that place on the same day to perform routine reconnaissance duty in the Celebes Sea from 14 September to 24 September.

Proceeding thence to the South China Sea with Dace commanded by Cdr. B.D. Claggett, Darter formed a coordinated attack team with that vessel. The period from 12 October to 24 October was productive of many targets and attacks for Darter, and she sank 9,900 tons of enemy shipping and damaged 19,900 tons in this time.

In the early morning of 23 October 1944 both Darter and Dace contacted and tracked a large enemy force heading north through Palawan Passage enroute to engage our forces in the Battles for Leyte Gulf. They attacked while the enemy were unable to alter course appreciably, and in brilliant predawn submerged attacks, sank the heavy cruisers Atago and Maya, and so severely damaged the heavy cruiser Takao that she was useless for the rest of the war. During daylight, Darter tried a submerged attack on Takao, which had been stopped, but was driven off by screening destroyers. Thus a night coordinated attack plan was drawn up by the two boats.

Since she could not surface to take sights,Darter was forced to navigate on a 24-hour-old dead reckoning plot. At 2200 Takao got underway, and Darter began 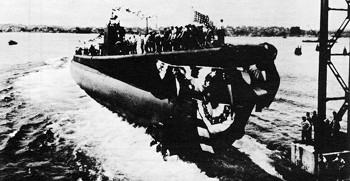 a surface attack. Detecting two radars sweeping, she decided to do an end around, and then make an attack at radar depth. At 0005 on 24 October 1944, Darter grounded on Bombay Shoal at 17 knots and rode up to a draft of nine feet forward. Efforts to get off the reef were unsuccessful and a message was sent to Dace requesting assistance.

Dace closed Darter and, after confidential gear had been smashed and classified matter burned, the men of Darter were transferred to Dace. This was all done before dawn, and there were no losses of Darter personnel.

Darter's demolition charges failed to go off properly, and Dace used her remaining torpedoes in trying to destroy her without success, the torpedoes hitting the reef and exploding before they could reach their target. She did, however, score 21 four-inch hits on Darter.Rock was called in and fired ten torpedoes at Darter, with similar lack of success due to their hitting the reef.

Nautilus, on her 13th patrol, arrived on 31 October 1944, and scored 55 six-inch hits on Darter. Her report states, "It is doubtful that any equipment in Darter at 1131 this date would be of any value to Japan except as scrap. Estimated draft of Darter - 4 Feet." Apparently the Japanese got no use out of her, for an American naval officer recently (1962) was amazed to see her hulk still intact, appearing to be indestructible.

It must be realized that Commander McClintock understood fully the dangers involved in the end around maneuver in which Dartergrounded indeed, the incident is a classic example of calculated risk, and he was not held in any way at fault in the incident. It was simply one of the unfortunate tactical losses which must be expected in wartime, but which, in this case, was minimized by the fact that Darter's full complement of personnel was saved. In order to keep this fighting and successful crew together the entire Dartercrew was ordered to take over the submarine Menhaden, then building at Manitowoc, Wisconsin.

Darter's four patrols (including her last) resulted in 23,700 tons of enemy ships being sent to the bottom, and 30,000 tons being damaged. She began her patrolling career south and west of Truk in January and February 1944. She damaged a freighter on this first patrol. In the second patrol of this vessel, she covered the area in and around the Celebes Sea; she sank a freighter here.Darter's third patrol was again in the eastern Celebes Sea, and she sank the large mine layer Tsugaru on 29 June 1944. She was credited with sinking the heavy cruiser Atago and damaging the heavy cruiser Takao on the night of 23 October 1944, shortly before she stranded. Darter was awarded the Navy Unit Commendation for the last patrol. 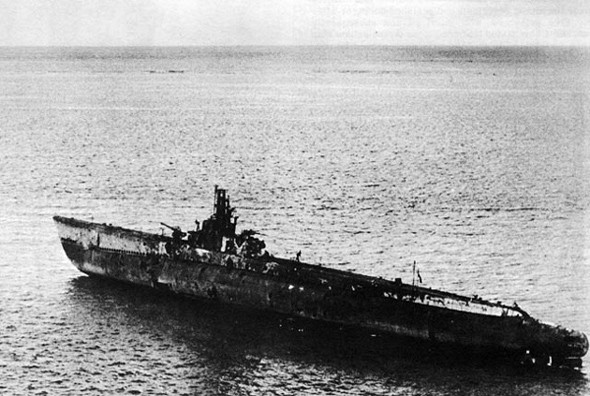