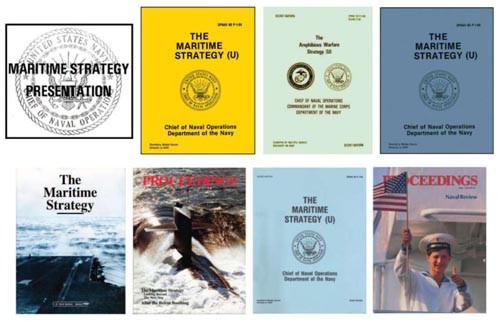 May 1984 The Maritime Strategy (SECRET pub) 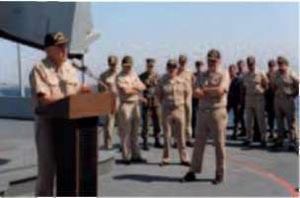 Had been CNO ADM Hayward's VCNO

The Maritime Strategy
Developed by his flag officers & staff, in 1st 2 years in office
During last 2 years, he embraced and used it, himself
By end of his term, he considered it his chief legacy

May 1990 "Maritime Strategy for the 1990s" (UNCLAS USNI Proceedings article) 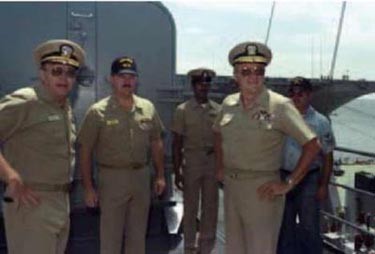 Had been Olmsted Scholar (U of Freiburg)

Sought at times to "bring the debate indoors"

Periodically tasked and signed out updated concepts, within original Maritime Strategy framework, including "the last word" in 1990

Billed as a "strategy"

Consolidation of existing thinking. Not a vision

Explanation of use of current forces

Told a story; provided a narrative

A "work in progress" throughout its lifetime

Why it was written (I)
To achieve consensus within Navy on USN rationale
To show USN vital relevance to conflict with Soviets, primarily through forward, global, offensive, joint & allied naval operations, especially in Pacific, on European flanks, & against Soviet ocean bastions
To deter Soviets through communicating to them USN capabilities & intentions
To show fit between Reagan Administration national security policies & USN recommended strategy, especially to Congress
To underpin arguments for the Reagan Administration "600-ship Navy" building program, especially CVNs
To influence development of USN POMs and budgets

CWC concept institutionalized in the fleet

US economy in recession; pulling out of from Nov 1982)

Context: Other contemporary publications (I)

How it was written (I)

How it was written (III)

How it was written (IV)

How it was written (V)

How it was written: Drafters (I)

How it was written: Drafters (II)

How it was written: Drafters (III)

How it was written: Drafters (IV)       Principal drafters:

How it was written: Drafters (V)

How it was written: USN-USMC coordination (I)

How it was written: USN-USMC coordination (II)

How it was written: Semi-official documents (II)

Sought to build a supportive literature on US naval strategy

Key ideas (VII)
"Sealift" as "3rd primary mission of the Navy" (1986)
Along with "sea control" and "power projection"
Sealift given ample coverage in slides & text
But...implications of The Maritime Strategy:
Soviets to be held at bay well north of SLOCs
Downgraded anticipated Soviet threat to SLOCs
Reduced perceived need for replacements for attrited merchant shipping
Dovetailed with Reagan Administration policies to avoid subsidizing the US civilian Merchant Marine 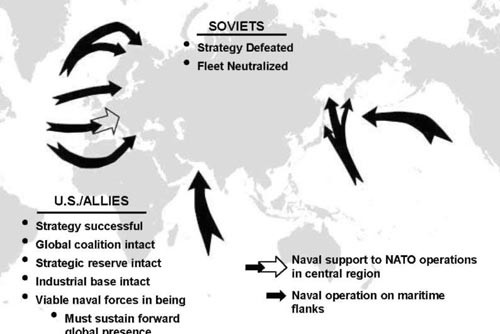 Was not:
USN go-it-alone
Blue-water, open ocean, sea control focused
Only about war fighting
Single CVBG operations only
The product of a carefully orchestrated CHINFO campaign
Solely the product of SECNAV Lehman
Merely an ex post facto justification for the 600-ship Navy
Without significant USMC or USCG input
Unconnected to national strategy

These later characterizations based on:
Not actually having read it (or Hattendorf book) or Reagan National Security Strategy
Perception that any single-service product must be an argument at the expense of the other services and the joint commanders
Simultaneous strong & public SECNAV & Navy anti-Goldwater-Nichols stance
Perceived need by later naval strategists to characterize earlier efforts as obsolete
USMC 1990s agenda to emphasize non-global-war nature of USMC capabilities & operations

What was new? (III)
Comprehensive drawing together of many previous & current campaign strands
Versions signed by 2 CNOs in a row
Formal place for strategy presentation & debate in Navy PPBS system ("Maritime Strategy CPAM")
Multimedia effort
Tracking the debate on the strategy, to help ascertain effects
Recording the history of its development, to help capture lessons learned

Not addressed
Sea-based ballistic missile defense Counterinsurgency, irregular warfare, anti-piracy ops
Non-Governmental Organizations (NGOs)
Homeland defense besides in US coastal waters
Maritime security, interdiction, interception ops
US Navy as an "enabling" force for other services
US Navy operations in the "littorals"
Littorals only seen as areas of USMC & Army interest

Was it a "strategy"?
What is "strategy" (officially)?
"A prudent idea or set of ideas for employing the instruments of national power in a synchronized and integrated fashion to achieve theater, national, and/or multinational objectives"
Joint Pub 1-02 DOD Dictionary of Military and Associated Terms (Oct 2008)
What is "naval strategy" (officially):
"The use of naval forces (including naval aviation and Marine forces) to achieve naval objectives determined by national strategy, with the overall objective of controlling the seas and denying to an enemy the use of those sea areas important to enemy operations"
NTRP 1 -02 Navy Supplement to the DOD Dictionary of Military and Associated Terms (Aug 2006)

Criticisms (II)
Too specific & detailed
Too general; not enough detail
Too sensitive; gave too much away to the Soviets on how USN would act
Promulgating the strategy needlessly called negative attention to the Navy and invited criticism
Developed subsequent to the Navy force level goal it allegedly justified
USN focus should be on emerging real-world demand signal for naval forces for SWA and the IO, not the NATO-Warsaw Pact War planning case
At the end, unwilling to recognize quickly enough that the Soviet Union was no longer a superpower or a threat
Should have been a co-developed & co-signed bi-service Navy-Marine Corps document

Influence on subsequent capstone documents
Became an oft-cited (if less oft-read) "gold standard" against which subsequent (& previous) documents were judged
Cited in The Way Ahead, NDP 1, Sea Power 21
Alleged to be the only USN "strategy" until A Cooperative Strategy for 21st Century Seapower (2007), by the latter's authors
Latter's authors deliberately sought to bask in The Maritime Strategy's alleged reflected glory 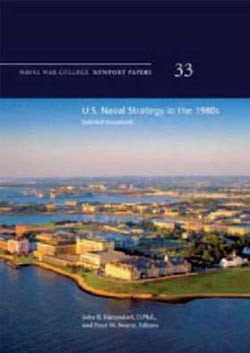