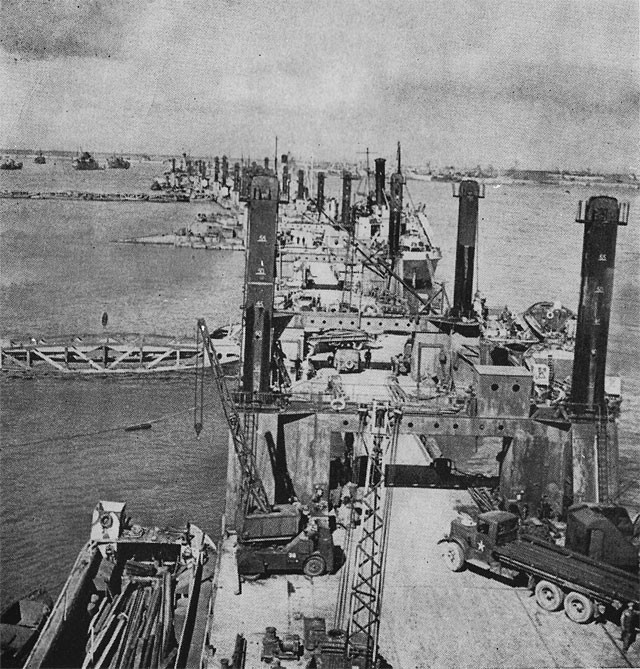 A Souvenir of the 7th War Loan
Published May, 1945 by
British Information Services

"We'll take our harbors with us."

AMERICAN and British officers planning the D-Day details in England were up against a tremendous problem. It was all very well to land troops on the beaches of Normandy, but once there they had to be kept supplied with immense quantities of ammunition, food, and weapons. How were these supplies to keep flowing without a harbor?

There was a limit to what landing craft could do. The rough Channel seas and the tide that rises and falls twenty feet meant that stuff put down on the flat Normandy beaches would be swamped by the tide before it could all be moved onto dry land. And the idea of starting off the invasion by capturing one of the heavily defended French ports was out of the question. It would take too long.

The story goes that one of the officers engaged in the planning remarked casually to one of his colleagues, not intending to be taken seriously, "Well, I suppose we'll have to take our harbors with us." This remark, it is reported, started the experts on a train of thought that ended at the point where the ramps of the prefabricated ports touched the Normandy shore.

Whether this is the true story of the origin of "Operation MULBERRIES" is not known, but at all events the idea, fostered by Winston Churchill, was presented at the Quebec Conference of August, 1943, and the decision was made there that the Allies would build two harbors as big as Dover and take them along to France.

Then began in Britain one of the most colossal and original engineering projects of this war. Detailed plans were worked out by the British Admiralty and the War Office, and 20,000 British workers were assigned to building the parts at various points in England.

On D-Day a huge fleet of several nationalities, besides British and American, began to tow the ports across the English Channel to pre-arranged sites on the French shore, escorted by the British Navy. On arrival, American Seabees, British Sailors and British Army Engineers assembled them. One harbor was wrecked in a severe gale, but nevertheless in the first 109 days of the invasion the Allies put ashore 2,500,000 troops, more than half a million vehicles, and 17,000,000 ship tons of munitions, weapons and supplies - a task that could not possibly have been achieved without the portable harbors.

In this pamphlet is shown briefly how these harbors were constructed and put to use.