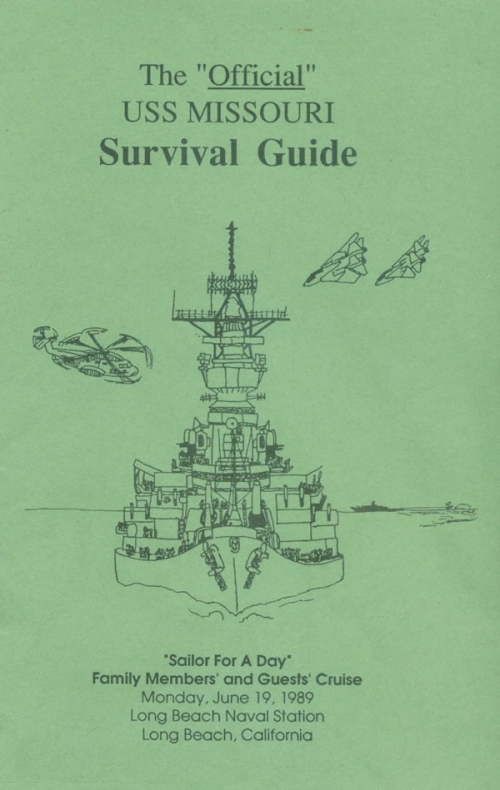 Welcome Aboard! I am pleased to welcome you aboard Battleship Missouri for what I'm sure will be an exciting and unforgettable day.

This Family and Friends Cruise is unique: it allows you to see, firsthand, the job your Missouri men do. It is quite an experience to observe the sailor at sea and I think it will become clearer to you how crucial loyal support from home is to him, once you see the job he does.

Today promises many sights and sounds you will probably remember for a long time: watch as we maneuver with another Navy ship, see Navy aircraft at close operating quarters, tour the decks of the World's Most Historic Battleship, and "man the rails" as we return to Long Beach.

As you walk these decks, I want you to see everything this exceptional ship has to offer. However, I urge you to keep in mind that a Navy ship is an inherently dangerous place and the potential for accidents, especially among the inexperienced, is high. Please review the safety rules on page four of this guide, and exercise caution as you move about the ship. Your safety is the primary concern of every Missouri crewmember during this cruise.

I hope you will have an enjoyable trip off the coast of southern California. Enjoy the cruise, shipmates!

USS MISSOURI, "Mighty Mo," is the fourth ship and the second battleship to bear the name of the "ShowMe" state. The ship was also the last battleship built by the United States.

The keel for the 58,000 ton Iowa class battleship was laid in 1941 and Missouri was launched in 1944. The ship provided gunfire support in the battles of Iwo Jima and Okinawa during World War II. On September 2, 1945, Battleship Missouri was the spot for the signing of the Formal Instrument of Surrender by Japan to the Allied Forces, ending World War II. As the mighty dreadnought sat at anchor in Tokyo Bay, representatives from the warring nations each took turns signing the Surrender, thus ending one of the bloodiest wars in history.

Missouri participated in several shore bombardments off the coast of Korea between 1950 - 1953 before being decommissioned and placed in "mothballs" at Puget Sound Naval Shipyard in Bremerton, Washington in 1955.

It was estimated that more than 180,000 people a year walked the historic teak decks while Missouri sat idle in Bremerton.

Missouri was recommissioned in 1986 in San Francisco, California and departed on an Around-the World shakedown Cruise - the first battleship to do so since President Theodore Roosevelt's Great White Fleet of 1907-1909.

In 1987, Missouri journeyed to the troubled waters of the Persian Gulf, supporting shipping operations near the Strait of Hormuz. During 1988, "Mighty Mo" participated in the Rim of the Pacific (RimPac) Exercise off the coast of Hawaii. 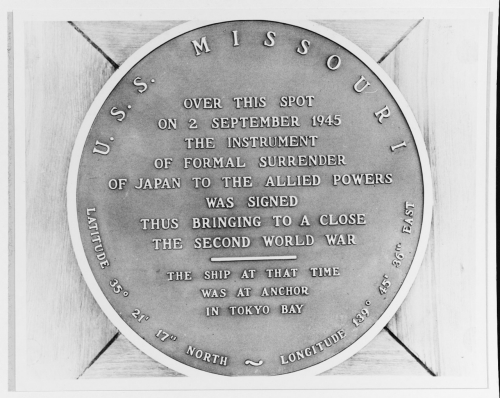 Plaque: U.S.S. Missouri, Over this spot on 2 September 1945 the instrument of formal surrender of Japan to the Allied Powers was signed thus bringing to a close the Second World War-The Ship at that time was at anchor in Tokyo Bay. Latitude 35 degrees 21' 17&quot; North - Longitude 139 degrees 45' 36&quot; East. (U.S. Navy photo in the National Archives: 80-G-437905).

Family members and Guests may purchase official USS Missouri emblematic items in the ship's library, located at 2-189-4-Q. The following items will be for sale by the Ship's Servicemen (SH's) [NOTE: This merchandise is no longer available for sale.]

THE BULLSEYE: This is the key to knowing where you are on the Battleship Missouri at any time. These yellow squares can be found somewhere in every space on the ship. Quite simply, a bullseye is an 'address' for a particular compartment. Sailors who need to get somewhere on the ship, but don't know where a particular place is, can find ANY space, just by knowing its "tac number." For example: 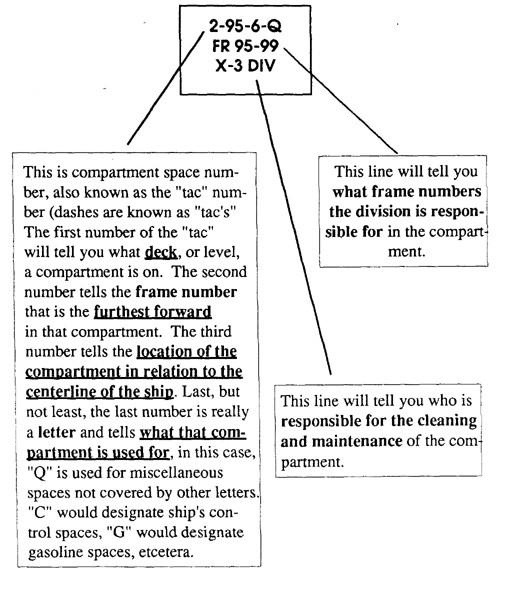 Missouri will feature many displays and tours through various spaces today, which will enable you to see how and with what USS Missouri's crew accomplishes their mission: "To Put Ordnance on Target."

1. Food Preparation - a tour of the gallery spaces to see the Missouri Mess Management Specialists in action

2. 16 Inch Gun Turrets- Want to see the inside of "Mighty MO's" big guns? Here's your chance! Continuous tours through Turret #1.

5. Barber Shop - The ship's barbers will gladly give children free military haircuts and show them the tools used in order to keep crewmen's hair "squared away." Barber Shop.

6. P250 and Firefighting gear- Damage Control plays a vital part in keeping the ship running smoothly. On the fantail, you can get "hands on"" training in Missouri firefighting from Damage Controlmen. A word of caution: YOU WILL GET WET!

7. Mount 54 - Although not as mighty as the 16 Inch guns, the 5 Inch guns hold their own in gunfire support. Here's your chance to see the inner workings of the 5 Inch/38 dual gun mount.

8. Ground Tackle - Missouri Boatswain's Mates will describe the process and show you the equipment used in getting the ship's two 32-ton anchors in the water. On the Foc's'le.

9. 50 Caliber Machine Gun- You will be given descriptions of the 50 Caliber machine gun and it's operations. On the Foc's'le.

(Note Tours: Tours will be given each half hour unless otherwise noted.)

1. After Steering - A tour of the Steering Units, Rudder posts, discussion of emergency steering procedures, and the Steering Stations. Meets on the aft mess decks.

5. DC Tour - Damage Control . . . it will save the ship in case of an accident or emergency situation. Visit "battle stations": Repair 2, Damage Control Central, Secondary DCC, and Repair 1 Aft. Meets in the Damage Control Office.

6. Operations Department- On this tour you will see the ship's Signal Bridge and Combat Engagement Center. Meets on Port side of Turret #2.

8. Navigation Department - "Where are we going???? How do we get there???" Explore Missouri's bridge, the seventeen and half inch thick solid steel "citadel", and see a demonstration of navigational tools. Muster on the Port bridge wing.

11. KBMO-TV Studios - did you know that we have a three channel television station onboard?? See how KBMO Closed-Circuit Television operates. Muster in the TV Control room.

No Caption: Picture of silhouette of Missouri [?]

Missouri will tentatively have an SH-60B Seahawk/LAMPS helicopter, or "helo", doing a fly-by with the possibility of F-14 and F-18 jets also "buzzing" the ship. 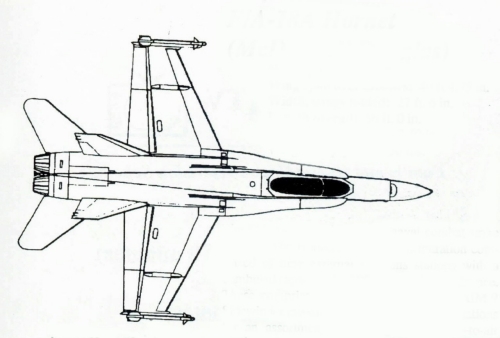 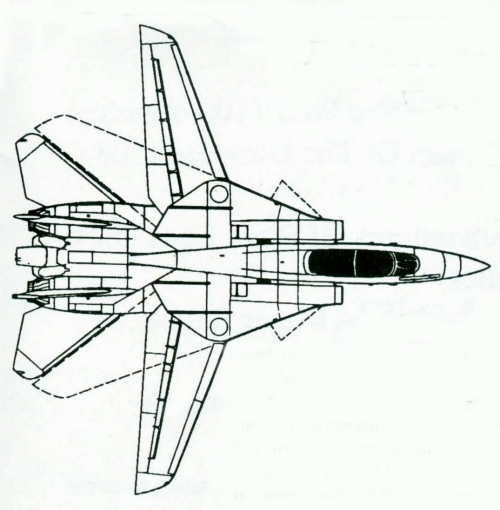 The F-14A Tomcat, popularized in the movie "Top Gun", is a two-seat, carrier based multi-role fighter. The weapon configuration is comprised of one GE M61A-1 Vulcan 20-mm gun with 670 rounds of ammunition on the left side of forward fuselage. The Tomcat can carry various combinations of Sidewinder, Phoenix, or Sparrow missiles for a total weight of 14,500 lb. In addition, the F-14A carries several anti-attack systems, including chaff and flare dispensers, with integral jammers. 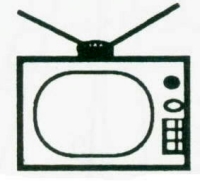 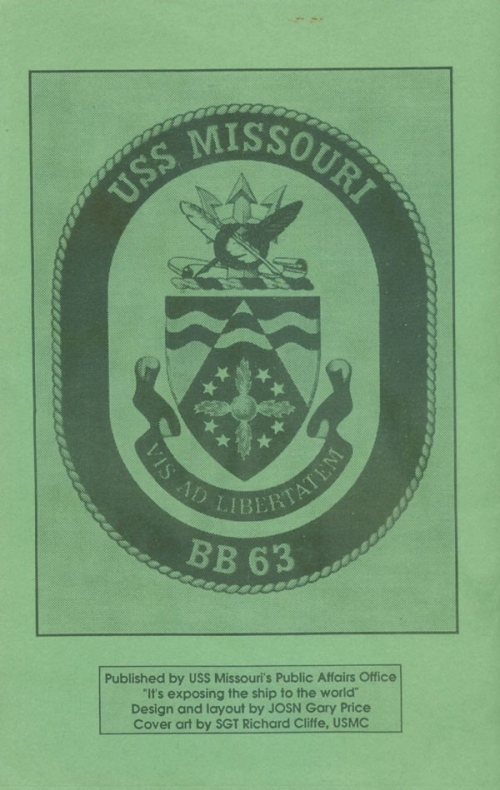