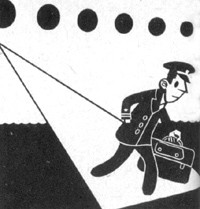 No Caption-drawing of officer leaving ship

As the officers and men who made up the vast majority of the Navy’s CIC personnel move back into civilian life, it is inevitable that much valuable battle experience will go with them. Much of what they learned has been preserved in the RAD [Radar Bulletin] series of publications and in articles in “C.I.C.”, “Electron,” Airborne Radar Digest,” and similar publications. In culling the action reports of the last battles of World War II and the summary statements prepared by some officers now moving out of the Navy’s CIC into law chambers, advertising offices, university classrooms and a hundred other civilian haunts, the editors of “C.I.C.” have come across much material which belongs in the written record of CIC lore. Following are excerpts from such a report, prepared by the CIC Officer of the Third Fleet during its last few months of operation.

“The responsibilities and duties of Force and Group CIC Officers as presently set up are greatly beyond the capacities of one man to administer over a period of active operations involving weeks or months. It has not been unusual for Force and Group CIC Officers to have to be up on IFD [Inter-Fighter Director] circuits for days at a time without interruption except for the absolute necessities of life. Night air and surface responsibilities are often far more demanding than 15 hours of full day strike operations. At times, fueling days have been as trying as strike days. To this must be added the burden of action reports, preparation of Op Plans [Operations Plans], continued meetings to keep pace with new equipment, operational requirements, and changes in tactical organization, personnel and material responsibilities, and professional reading. The need for at least one assistant, on duty in a permanent staff capacity, is crying.

“Though excellent in theory, practice has not borne out the belief that the CIC Officer of the flagship can stand-in for the staff CIC officer. A carrier or AGC [Amphibious Force Flag Ship, equipped with special communications facilities] CIC officer has equally great commitments upon his time, and has responsibilities nearly as great as has the staff CIC officer.

“The principle of constant rotation of radar (technical) officers and CIC officers between the operating forces and training activities is important to the maintenance of high standards in both respects. If technical developments do not go hand in hand with tactical employment and requirements thereof, wasted efforts is the invariable result.

“Aside from the more important factors of rotation and refresher which have already been touched upon, specific recommendation is made that all officers, and unquestionably those who handle fighter direction circuits, be more thoroughly grounded in the technique of R/T [Voice Radio] procedure. Situations should be studied rather than just vocabulary. Development of abbreviated procedure is recommended as a worthwhile project.

“For CIC to put out ‘the dope,’ sufficient information has to come in to make the dope ‘good dope.’ Whether or not it was so intended, CIC has developed into an evaluating activity, and it has been in this instance that CIC personnel has received its most fragrant bouquets from commanding officers. But to be effective all information of an operational and background nature must get to CIC. There must be meaning and associated understanding if the chaff and wheat are to be distinguished when seconds hold lives at stake. Such dissemination is of the utmost importance in the case of the force and group CIC officer.

“The needs of training activities should never be forgotten. Operation plans and action reports timely in hand, are the fuel for their lamps of knowledge. During this war fighter direction and training schools have been a minimum of 6 months behind the operating forces in keeping up with new fighter direction and CIC procedure and techniques.

“It would seem that much is to be gained by the inclusion of Force and Group CIC staff specialists in planning conferences prior to the preparation of the Op. Plans, if for no other reason than utilizing the radar equipment of the force to the best advantage. But more important is the understanding gained of the objective involved, and the intent and wishes of the officers in tactical command.

“Force and Group CIC officers, and to a lesser extent ship CIC officers, have not possessed the rank commensurate with the responsibilities of their jobs. This not only has proved a handicap in an operational

way, in that such officers participate on a level of command not often realized, but it has deprived those key officers of information needed in the fulfillment of their duty, and of contact with officers who, alone, can provide, the essential information. It has not been infrequent that CIC officers have bewailed the fact that their juniority has put them last on the routing and dissemination list, even though they were expected to be able to take action based on said subject matter.

“It is recommended that all possible advantage be taken of the operational experience of senior CIC officers, who will, in the majority of cases, return to inactive duty in the not too far distant future. The ‘ultimate’ in CIC design and installations is yet to be conceived. There are only a very few regular (USN) officers in the navy who have had meaningful experience on the GCICO level. There are no more than six who have had modern fast carrier-force experience as carrier CIC officers, most of whom have since been assigned to other duty.”

“Fighter direction units of fast carrier forces were in varying degrees uninformed on the fighter defense and facilities of the shore establishments at Okinawa and Leyte – such information as the following:

“Force and Group CICO’s must have access to information on all air operations which will have any effect on his own area.

“Information of the whereabouts of nearby surface units; particular emphasis on subposits, subzones, communication with units of other forces etc., is a necessary factor in insuring immediate identification and action upon receipt of radar reports from aircraft requesting instructions relative thereto, and the like.”

“Operations of the fast carrier forces of recent months have demonstrated the need for two force IFC circuits – tactical and administrative.

“The Coordination of air operations and air defense at such times as large-scale operations are in progress, necessitates a circuit between task forces (IFD) on which the background information important to the tactical situation may be disseminated (administrative), such as: posits of groups and pickets; fleet center from point option and other information necessary for station keeping; launch-land operations; deck conditions of carriers; flash reports from aircraft received by another group and which must reach the force without delay; changes in air plans; and the inter-group cooperation of air-sea rescue.

“It was not seldom that such traffic interfered with such vital transmissions as the state of interceptions in progress; identification of possible bogies; assignment of action and backing-up groups on interceptions; contacts picked up by one task group high over an adjacent group and unidentified.

“The operational advantages of the AN/ARC-1 [Airborne radio communication equipment, series 1] radio for CIC installations were demonstrated time and again by those ships which had several such units installed.

“It is recommended that such automatic tuning features be incorporated in all CIC radio equipment so that the necessary flexibility of communications on all fighter-direction channels is available in CIC, without reliance upon a remote station for selective tuning.

“So-called VHF ‘tactical’ or ‘OP-AD’ circuits required the use of one of the transmitters (and in some cases, receivers) needed by a fighter direction ship. As standard CIC radio equipment allowances were not predicated upon the existence of such a circuit, CIC communications in several ships assigned fighter direction duties were handicapped in terms of flexibility.

“Installation of such equipment for use in VHF bands in all fighter direction ships could have been utilized to great advantage.”

“It is almost impossible for anyone but the trained yeoman to log traffic typical of high-speed IFD circuits. The importance of complete logs on such circuits has been established. Reconstruction of engagements and countless action reports are based on the information derived from IFD logs.

“Several carriers have found that banks of Armatype wire recorders, with patch-panel control boards, have proven most satisfactory for this purpose. Detailed air operation reports, air-borne ‘situation reports,’ etc., may be transmitted rapidly, same being played back for write-ups and status-board display. Eliminated is the ‘Repeat all after’.”